Heart Failure (HF) is an important public health problem as a result of its high morbidity and poor prognosis [1]. The clinical features of HF are decreased exercise ability and with early fatigue and dyspnea [2,3]. Myocardial fibrosis plays an important role in HF, because it mediates the process of maladaptive remodeling [4]. Myofibroblasts express α-smooth muscle actin (α-SMA), indicating the acquisition of a secretory and contractile phenotype, which are associated with increased synthesis and deposition of Extracellular Matrix (ECM) proteins including collagen [5]. Transforming growth factor-β (TGF-β) is the most effective stimulator of myocardial fibrosis, and myocardial TGF-β levels are elevated in HF. TGF-β stimulates cardiac fibroblast-myofibroblast transformation and ECM deposition [6]. Oxidative stress is considered to play a key role in the development and progression of HF-related cardiac remodeling [7]. Reactive Oxygen Species (ROS) regulate ECM remodeling according to mediating cardiac fibroblast function and stimulating collagen turnover [8]. NADPH oxidase (Nox) is the main source of ROS in the heart [9]. Nox2 and Nox4 are the primary isoforms and which expressed in the myocardium [10]. Nox4 has constitutive activity and is located in mitochondria, which is the main source of superoxide generation in the heart [11]. Current guidelines recommend regular physical exercise for patients with stable HF to prevent and/or reduce cardiac remodelling [12]. Some clinical experiment studies have shown that physical exercise can alleviate abnormal cardiac remodeling, improve blood flow and oxygen utilization, and increase cardiac function, exercise duration and quality of life [13-15]. Exercise training can reduce the risk of HF [16] and improve cardiac function [17,18].

This study used exercise training consisting of open and free swimming in warm water at a suitable depth in a swimming pool to avoid an excessive fear of drowning and struggling. The effects of this swimming exercise training on doxorubicin (DOX)-induced cardiac fibrosis and oxidative stress in the rat heart were then investigated.

The animal experimental protocols were approved by the Dalian University of Chinese Medicine Committee on Laboratory Animal Care, and all animals received humane care according to Dalian University guidelines. The Sprague-Dawley (SD) rats were provided from the Dalian Medical University Laboratory Animal Center. All animals were fed under daylight and night conditions, and they were fed and drank freely. Establishment of animal models based on previous methods [19,20]. 45 male SD rats weighing 150 ± 20 g were randomly divided into a control group (n = 15), DOX group (n = 15), and DOX plus exercise (DOX+E) group (n = 15). Within 2 weeks, HF was induced by intraperitoneal injection of cardiotoxic agent DOX at a cumulative dose of 15 mg/kg for 6 injections (DOX 2.5 mg/kg × 6). After DOX injection, swimming exercise lasted for 8 weeks.

One week before DOX injection, exercise was domesticated in the experimental swimming pool (temperature 30℃; water depth 44 cm; radius 120 cm). The progressive program initially involved swimming for 5-10 minutes and gradually extended to 50 minutes/ day. HF was induced after swimming training. When DOX was injected, rats were given formal swimming exercise for 60 minutes/ day, 5 days/week for 8 weeks. All groups of rats were anesthetized. Chest hair was removed by shaving and depilating ointment. The LV function was assessed by echocardiography using a high-resolution small animal imaging system, in which the animals were placed on a heating platform in a horizontal position. Two-dimensional and M-mode echocardiographic studies were performed from shortaxis view and end-systolic and ventricular dimensions [21]. Left ventricular (LV) function was assessed by ejection fraction (EF), shortened fraction (FS) and end-diastolic and systolic diameter of LV.

Cardiac tissues were immobilized with 10% buffered formalin solution for 30 minutes, then dehydrated overnight in 75% ethanol, followed by paraffin embedding. Continuous 4-micron sections were cut. Sections were stained with hematoxylin and eosin (HE) for histological analysis. Rat cardiac tissues from each group were stored in 10% formalin for 2 weeks, dehydrated in a rising series of alcohols (75%, 85%, 90% and 100% alcohols, each for 5 minutes) and embedded in paraffin. Paraffin sections 4 microns thick were cut from these paraffin-embedded tissues. Tissue sections were deparaffinized by immersing xylene (three times, five minutes each) and hydrated with a series of alcohols (100%, 90%, 85% and 75% alcohols, five minutes each). Masson trichrome staining was used to stain the biopsy samples to study the changes of cardiac morphology and fibrosis. Blue staining represents the accumulation of collagen. The results were observed by Olympus B X 40 upright light microscope.

All data are presented as mean ± SEM. The statistical analysis was performed using SPSS software version 23.0 (SPSS Inc., Chicago, IL, USA). Inter-group variation was measured by one-way analysis of variance and a subsequent Tukey’s test. The minimal level for significance was P < 0.05.

All groups SD rats after 8 weeks of different treatments, metabolic characteristics were summarized in Table 1. There was no difference in heart weight, body weight and heart/body weight among the three groups.

HE is staining showed that the histopathological changes in DOX group were significantly higher than those in control group: some tissues were enlarged, degenerated or dissolved, or included necrotic cardiomyocytes, myofibrillar distortion, inflammatory cell infiltration or myocardial fiber rupture. Most lesions were absorbed in DOX + E group; some patients still had a small amount of inflammatory cell infiltration (Figure 2). 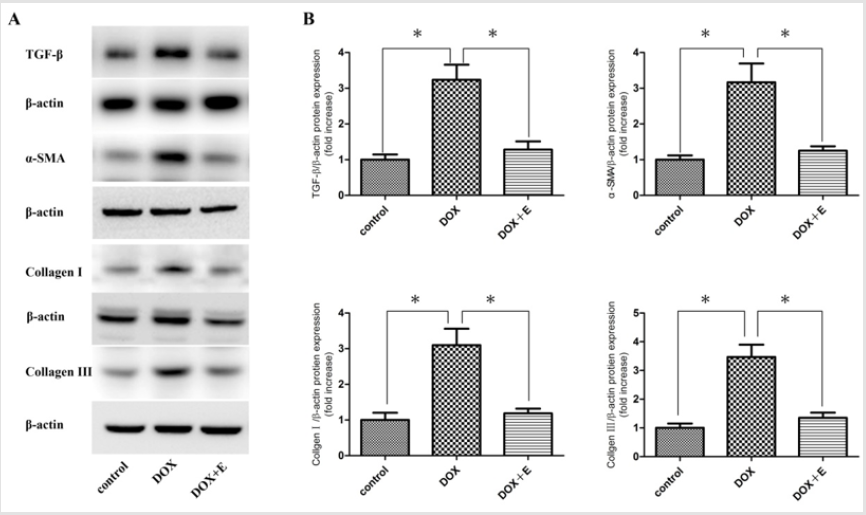 Figure 5: Nox4 and p53 protein expressions in the cardiac tissues of the three groups after 8 weeks of different treatments (n = 3). Protein bands and quantification of protein levels (mean ± SEM). *P < 0.05 vs the DOX group.

Here we showed that exercise improves the cardiac functional capacity of rats with DOX-induced HF. We also assessed the influence of physical exercise on cardiac fibrosis and oxidative stress. There was no difference in body weight among the three groups. Weight loss, known as cardiac cachexia, is common in the late stages of heart failure in humans, and is associated with poor prognosis, regardless of important variables such as age, EF, exercise capacity or functional class [22]. In our study, observed weight retention showed that rats that survived to the end of the study did not have severe HF. We performed transthoracic echocardiography and tissue Doppler imaging prior to the exercise protocol to evaluate the degree of cardiac injury induced by DOX and ensure intergroup homogeneity. Exercise may effectively increase LVEF and LVFS, leading to improved LV function in the DOX-induced rat HF model. Histomorphological damage was significant reduced in the DOX+E group compared with the DOX group as evidenced by HE is staining. Increased synthesis or decreased collagen degradation play an important role in cardiac damage after HF, which ultimately affects LV function. Our study showed that myocardial collagen deposition in the HF group was significantly increased compared with that in control group by Masson’s trichrome staining, however, with exercise treatment group showed myocardial collagen deposition was decreased.

Cardiac fibrosis is a complex process involving multiple pathways of interaction, but TGF-β plays an important role in cardiac fibrosis. Previous studies have shown that TGF-β promotes scar tissue formation during scar formation [23,24]. It also induces fibroblasts to transform into myofibroblasts [25]. Myofibroblasts are found in abnormal myocardium, characterized by the presence of microfilamentary contractile devices rich in α-SMA. Persistent myofibroblasts lead to excessive scarring and further loss of tissue compliance [25]. Many studies have shown that the expression of collagen I and collagen III in cardiac fibroblasts are significantly increased [26,27]. Our study findings are in agreement with these reports. The present results show that TGF-β, α-SMA, collagen I, and collagen III protein expressions were significantly increased in the DOX group compared to the control group; however, these increases were markedly reduced in the DOX+E group rats. These results indicate that exercise reduced cardiac fibroblasts according to TGF-β, α-SMA, collagen I, and collagen III.

Nox4 in myocardial cells is the main source of mitochondrial oxidative stress, which mediates mitochondrial and cardiac dysfunction [28]. P53 is a stress-induced transcription factor that can be activated by several adverse stimuli, including DNA damage, hypoxia and ROS. Under these conditions, increased expression of p53 protein leads to growth arrest or apoptosis [29,30]. Ying W et al. [31] reported that Nox4 and p53 play critical roles in cardiomyocyte injury. The present results showed that Nox4 and p53 protein expression significantly increased in the DOX group compared to the control group; however, exercise can markedly decrease Nox4 and p53 protein expression in DOX-induced HF rats. Exercise improves the functional capacity of rats with DOX-induced HF regardless of changes in cardiac structures, LV function, cardiac fibrosis, and oxidative stress. These findings provide new insight into the role of exercise in DOX-induced HF and identify a novel potential therapeutic intervention to treat HF.

This work was finally supported by The Doctoral Scientific Research Foundation of Zhongshan Hospital Affiliated to Dalian University (DLDXZSYY-BK201804).