Objective of this study was to evaluate the bioefficacy of Skintex® MR III blanket against main malaria vector, Anopheles stephensi. The effectiveness of blanket was evaluated using conical according to the WHO methods. Washing procedure was followed by WHO method. Results indicated that in Skintex® MR III blanket mortality around 40% in 6 washes and no mortality in control group. After 25 washes the efficacy is reducing. This blanket has more repellency and knockdown effect against malaria vectors. Findings of this study provide guideline for malaria vector control authorities and people using pyrethroid-impregnated blanket especially in the complex emergency conditions.

Malaria and other mosquito-borne disease are the major problems worldwide. Currently there are proven and effective tools to fight against malaria including vector control measures [1]. As these tools are scaled up, malaria endemic countries need to continually update the skills and competence of the health workers engaged in malaria control and elimination. Malaria is one of the important infectious diseases in Iran with an average of about 15000 annual cases in the last decade. More than 80% of malaria cases in Iran are reported from three provinces of Sistan and Baluchistan, Hormozgan, and Kerman in southern and southeastern areas of the country. The most routes of malaria cases are immigration from Afghanistan and Pakistan to southern and southeastern areas of the country (Ministry of Health, annual reports). Locally transmitted cases are now concentrated in the south-eastern part of the country, which are affected by extensive population movement across the border with Pakistan, where malaria control faces serious difficulties. In 2009, I.R. Iran set timebound elimination objectives for its malaria program.

There has been excellent progress since, but the continued risk of importation of malaria cases from Pakistan poses a huge challenge, politically, socially, operationally and technically, to malaria elimination in Iran. The situation in the next decade will be absolute elimination or one where a few small shortlived foci emerge from time to time as a result of importation. The latest number of autochthonous cases in the whole country is 42 including 23 local malaria patients, 7 relapsed cases, 12 imported from the other districts by end of July 2016. There are several works on different aspects of malaria including insecticide resistance monitoring [2-12], sibling species, molecular study, new record [13-20], novel methods for vector control [21-26], faunestic study [27,28], use of plants for larval control [29-41] using bednets and long lasting impregnated nets [42-48]morphological studies [49-51], malaria epidemiology [52-55], ecology of malaria vectors [56-64], biodiversity [65,66], community participation [45,54], vector control [67], repellent evaluation [68], anthropophilic index of malaria vectors [65,69], training [70] is designated as malaria training center by WHO. There are several reports on different aspects of malaria vectors recently [71-96]. Insecticide-treated bedding materials such as impregnated blanket with pyrethroids could protect the people against vectors of diseases such as malaria in the complex emergency situation which and are more likely to sleep in exposed situations.

Every yard of our Skintex MR III blankets contains millions of permethrin filled microcapsules that protect against mosquitoes, ticks, ants, flies, chiggers and midges. The proprietary micro encapsulation process creates a slow release effect for the active ingredient, Permethrin, and doesn’t leave any greasy residue or smell associated with some insecticides. The blanket is lightweight and breathable, packs up small, and can be used in many different applications. Many users of the blanket find that it is comfortable to wear even in the humid conditions which attract mosquitos. When you add in the other various pests and insects that experience the knockdead/knockdown effect of Skintex MR III, the blanket quickly becomes an appealing accessory for hikers, campers, cycle tourists, and any family who spends time outdoors.

The Beech strain of An. stephensi which is susceptible to insecticides is used. The breeding was carried out at 29±1 ºC and 60±10% relative humidity at 16:8 h light-dark photoperiod. The larvae were fed with enriched wheat germ and the adults received a 10% sucrose solution. Guinea pigs were used for blood-feeding of female mosquitoes. At each replicate of the biological efficacy of the nets, a total of 100 sugar-fed of 5–8 days females were used. The sucrose solution was picked up from the cage, 12 hours before starting the experiments.

Samples (25×25 cm) were individually introduced into one-liter beakers containing 0.5-liter deionized water, with 2 g/L soap savon de Marseille “Le Chat®”. The soap was added and fully dissolved just before introduction of net samples. Beakers were immediately placed into a water bath at 30 ºC and were shacked for 10 min at 155 rounds per min. The machine is the same as recommend by WHO. The samples were then removed and rinsed twice for 10 minutes in clean, deionized water in the same shaking conditions. Nets were dried at room temperature and stored at 30 ºC in the dark. A piece of 25×25cm was used for tunnel test prior and after every washing. This is following of WHO standard washing procedure. The net was washed and dried once a week. The netting sample had nine holes with 1 cm diameter and the nets were fixed on a cardboard frame. The nets were replicated as appropriate number.

The samples were subjected to standard WHO bioassays. Mosquitoes were exposed to netting samples for 3 minutes after which they were held for 24 h with access to 10% sugar solution. Four cones gently fitted on the net. A net flap was made inside the cone to reduce the chance of mosquitoes resting on the cone instead of on the treated net. Five female mosquitoes introduced at a time in each cone with appropriate replicates per net sample. In cone bioassays, five mosquitoes were introduced into a cone at a time. 20 other batches of each mosquito were exposed to netting from untreated nets as control. Time interval between each set of a 4 cone was as brief as possible. At least 100 mosquitoes were tested on a netting sample (25×25 cm). Conical tests were carried out according to the WHO method. 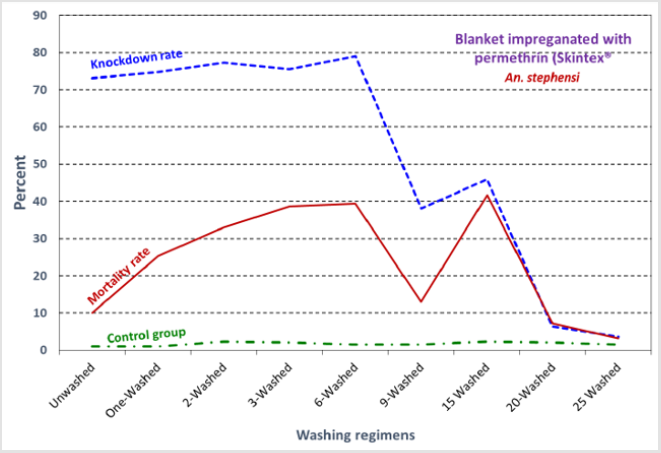 Figure 1: Trend of knockdown and mortality rates of An. stephensi exposed to blankets impregnated with permethrin (Skintex®) using cone tests.

The present study determined the efficacy of Skintext using cone bioassay. The results are presented in (Figure 1). In the conical test, mortality rate in the control was zero and in the treatment was high indicating efficacy of blanket. Many fields research exhibited that if pyrethroid impregnated bed nets was not exposed to washing, the residual effect of insecticide will be remained up to 6 to 12 months. There are several reports on the efficacy of nets [97-108]. This residual effect depends on type and quantities of insecticide used as well as type and characteristics of net. In practice, washing methods, type of detergents, the numbers and method of washing, are not as the same as in different parts of the world. It is determined that remaining soap on nets will demolish the molecular structure of pyrethroids. Results of this study are useful for decision making for malaria and other vector control. According to the producer, the SkintexTM MR III blanket is a lightweight, durable synthetic blanket treated with microencapsulated permethrin. The blanket is intended to provide personal protection from mosquito bites and malaria infection in situations where use of an insecticide-treated net or indoor residual spraying is not feasible.

Blanket use disrupts permethrin microcapsules, releasing the insecticide, which repels and kills mosquitoes landing on the blanket. The blanket provides a physical barrier against mosquito bites. Permethrin in the blanket deters mosquito landing and probing, and kills mosquitoes following exposure (100% knockdown, 100% mortality). The encapsulation of the permethrin provides extended persistence of the permethrin as the capsules are gradually opened by movement and friction during blanket use. By reducing mosquito bites, the prototype provides personal infection in situations where use of insecticide treated nets or indoor residual spraying are not feasible. Preliminary results on entomological efficacy, including knockdown and mortality testing, and limited repellency testing WHO tube assays showed 100% knockdown in one hour and 100% mortality of Ae. aegypti after 5 minutes exposure to washed samples (up to 25 washes) [109,110]. Repellency testing indicated a reduction in bites from Ae. aegypti, but did not demonstrate repellency due to the absence of a control and sufficient replication. After 25 washes the concentration of permethrin was 64% of the original concentration (1.4 g/m2). This concentration provided 100% knockdown at 60 min post-exposure and 100% mortality at 24 hrs. Studies by Graham et al. [110] supporting acceptability of pyrethroid-treated sheets and clothing to users and protection from bites. Previous published studies from Afghanistan and Kenya show the proof of principle of treated topsheets or blankets [111,112].

This project is financially supported by the Ministry of Health and Medical Education of Iran as NINAD code number: 943646.

Objective of this study was to evaluate the bioefficacy of Skintex® MR III blanket against main malaria vector, Anopheles stephensi. The effectiveness of blanket was evaluated using conical according to the WHO methods. Washing procedure was followed by WHO method. Results indicated that in Skintex® MR III blanket mortality around 40% in 6 washes and no mortality in control group. After 25 washes the efficacy is reducing. This blanket has more repellency and knockdown effect against malaria vectors. Findings of this study provide guideline for malaria vector control authorities and people using pyrethroid-impregnated blanket especially in the complex emergency conditions.