Ginger (Zingiber officinae Roscoe) is a flowering plant in family Zingiberaceae whose roots is widely used as an ingredient in both cooking and East Asian traditional medicine. Ginger is traditionally used to treat fever, nausea, vomiting, and uterine disorders. Ginger has also been used to treat paralytic ileus in Japan [1-4]. It has been reported that ginger can regulate contractility of uterine, gastrointestinal (GI) tract, and airway smooth muscle. Rat uterine muscle tone and spontaneous contractions can also be enhanced by ginger extract [5]. Such enhancing effect on the contraction is produced by activation of voltage-dependent L-type Ca2+ channels (VDCCL) and release of Ca2+ from sarcoplasmic reticulum [5]. Other reports have suggested similar enhancing effects of ginger extract on rabbit uterine smooth muscle tone and its spontaneous contractions [6]. In general, VDCCL is essential for the regulation of smooth muscle contractility in many species [7-10]. Nifedipine, a VDCCL blocker, can also block oxytocin (OXT)-induced phasic contraction in murine myometrium (unpublished data). Regulatory effects of ginger on contractility of uterine, gastrointestinal (GI) tract, and airway smooth muscle have been reported [5-6,11].

Ginger also can improve gastric emptying and motility, intestinal contractility, and irritable bowel syndrome (IBS) in the GI tract [12-13]. In addition, ginger extract and its components can also inhibit motility of GI including the lower esophageal sphincter (LES) [14-15]. Other studies have suggested that ginger extract has regulatory effects on airway and vascular smooth muscle [16-17]. However, the mechanism of action involved in the effect of ginger extract on these organs remains unclear. In this study, we found that ginger extract could inhibit uterine smooth muscle contractility by blocking VDCCs. Since ginger is safe for humans, ginger might have potential to be developed as a tocolytic agent to relieve excessive uterine contractions.

All experiments were performed in accordance with the guidelines for animal care and use provided by Chungbuk National University (CBNUA-383-11-01; CBNUA-597-13-02; CBNUA-719-14-01; CBNUA-863-15-01; CBNUA-988-16-01; CBNUA-1125-17-02; CBNUA-1162-18-02). All animal experiments were conducted in accordance with the National Institutes of Health (USA) Guidelines for the Care and Use of Laboratory Animals (the Guide for the Care and Use of Laboratory Animals (8th edition, National Academies Press)) and were approved by the Chungbuk National University Medical School Research Institutional Animal Care and Use Committee (Korea). Female non-pregnant mouse was used in this whole study. Institute of Cancer Research (ICR) mice (age, 10–12 weeks) were anaesthetized with fluoromethyl 2,2,2-trifluoro-1(trifluoromethyl) ethyl ether (Sevoflurane; Maruishi Pharma., Osaka, Japan) and/or chloroform and killed by cervical dislocation. Their uteri were cut open from the neck to the end of uterine horns, rinsed in Krebs-Ringer bicarbonate (KRB) solution, and pinned on a Sylgard plate to maintain their original shape. Connective tissues were removed, and these uteri were cut.

The endometrium was separated from other muscle layers in KRB solution. Longitudinal muscle strips (1 × 5 mm) were mounted onto vertical chambers (25 and 75 mL) in an isometric contractile measurement system with one end of the tissue tied tightly to a fixed holder while the other end of the tissue was linked to a force transducer (Harvard Instruments, Holliston, MA, USA) by a hook. The force transducer was connected to a Power Lab-Data Acquisition System and a personal computer running Charter v5.5 software (ADinstruments, Boulder, CO, USA) to measure isometric contractions. Each strip was stretched passively to resting tension for 1-2 hours after equilibration for 1.5 hours. Contractile responses of the strip to high K+ (50 mM) were repeated twice.

Dried ginger powder was purchased from a local company and 300 g was extracted twice with methanol for 2 L 24 hours at room temperature. Four liters of this methanol extract was dried in a rotary evaporator to yield 21 g of precipitate. The precipitate was resuspended in 500 ml of water and mixed with 500 ml of dichloromethane. The mixture was set at room temperature until water and dichloromethane phases separated clearly. Water and dichloromethane fractions were then collected and freeze-dried. Yields of water and dichlromethane fractions were 9.4 g and 11.4 g, respectively. We already got patent in Korea (Patent No: 1018089440000; Title: Composition for preventing and treating dysmenorrhea and premature labor comprising non-polar solvent subfraction from Zingiber officinale extract; Web site: http:// engportal.kipris.or.kr/engportal/search/total_search.do)

Data are expressed as means ± standard errors of the mean (SEM). Statistical significance was measured using analysis of variance (ANOVA) and student’s t-test. Any p-value less than 0.05 was regarded as statistically significant. 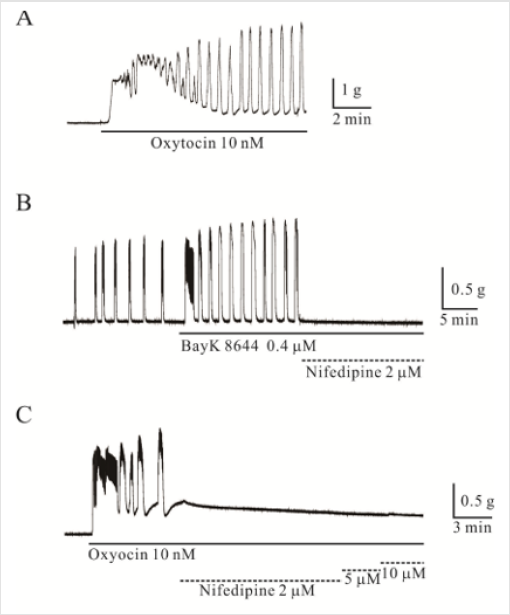 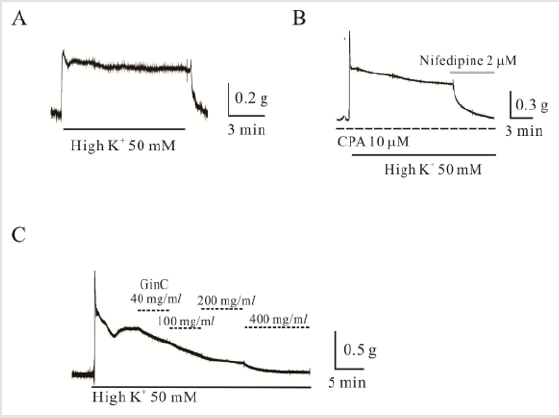 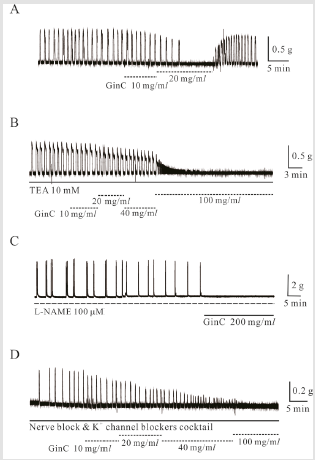 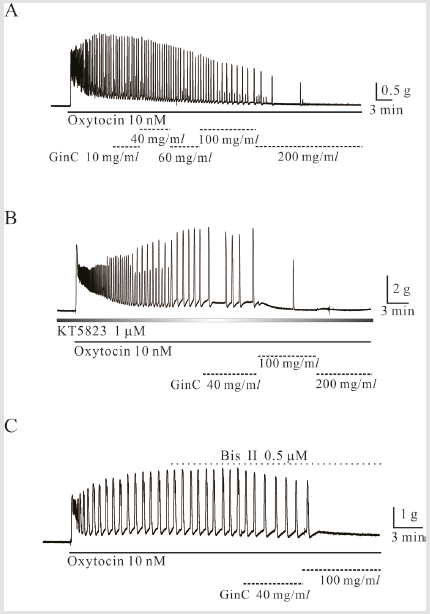 tightly linked to Ca2+ influx and Ca2+ signaling at cellular level [18]. In this study, we found that Gin C inhibited contractions of murine uterus longitudinal smooth muscle by inhibition of VDCCL. As shown in (Figures 1 & 2B), murine myometrial contraction was tightly related to the activation of VDCC. Well-known pharmacological blockers such as nifedipine inhibited myometrial contractions. This implies that both VDCCL is important for the regulation of myometrial contraction. In this study, Gin C inhibited high K+-, OXT-, ACh-, and PGF2α- induced phasic contractions. Its effect was independent of NO synthesis, protein kinases (PKA, PKG and PKC), K+ channel, or nerve blockers (Figures 3 & 4). This finding suggests that Gin C may inhibit mouse uterine smooth muscle contractions by inhibiting VDCCL and/or VDCCT strongly. It has been reported that ginger can enhance and inhibit uterine, GI tract, and airway smooth muscle contractions by activating VDCCL [4,14,19]. In the present study, we found that murine uterine spontaneous contractions and OXT-induced phasic contractions were sensitive to BayK 8644 and nifedipine (Figures 1B & 1C).

In smooth muscle, Ca2+-induced Ca2+ release (CICR) mechanisms also known to be important to regulate smooth muscle contraction [20-22]. As shown in Figure 2B, effect of Gin C was studied in the presence of CPA too. Therefore, inhibition of murine myometrial by Gin C might be responsible for the inhibition of VDCCL. However, in fact, effects of constituents of ginger extract on smooth muscle contractions were reported differently depending on the diverse extract. Therefore, we will also try to do some more supplementary experiments delicately by using other extracts from ginger in the future. Primary dysmenorrhea may be caused by an increase in PGF2α produced in the uterus that can hyper contract the uterine smooth muscle and/or locally contracts blood vessels [23-24]. However, the exact mechanism of uterine spasms is currently unclear. However, phasic contraction was also sensitive to nifedipine in murine myometrium (unpublished data), Gin C inhibited PGF2α- induced contractions by inhibition of VDCCL. Therefore, inhibition of PGF2α-induced contractions by Gin C might suggests it could reduce symptoms of dysmenorrhea.

It is well known that VDCCL performs a key role in the regulation of smooth muscles [7-9]. However, the role of VDCCT in such regulation is relatively unclear. In myometrium, VDCCT in rat and human pregnant samples has been reported. In rat pregnant myometrium, spontaneous phasic contraction has been found to be sensitive to micromolar ranges of mibefradil [11]. Meanwhile, specific subtype of VDCCT (CaV3.1) and role of VDCCT in the regulation of contraction in human pregnant myometrium has been identified [25-26]. Whether the exact subtype of VDCCL and/or VDCCT might be related to various conditions of myometrial contractility is not fully understood yet. Furthermore, the role of VDCCT compared to that of VDCCL in myometrial contraction is not well studied yet. In fact, even the regulation of rat pulmonary arterial proliferation is regulated by VDCCT through activation of CaV3.1 channel [27]. We identified functional expression of VDCCL (CaV1.2) in murine myometrium by performing mechanics and immunohistochemistry (data not shown in here). However, further study is needed to identify T-type Ca2+ channel and more functions of it in murine and human myometria.

Ginger extracts are known to have effects on the GI tract. For example, they can inhibit LES motility [14,19]. In these cases, serotonergic receptors and/or cholinergic M receptors are involved in inhibiting smooth muscle contraction [15,28]. Ginger extract can also improve gastric emptying and IBS for gastric and intestinal motility, respectively [12-13]. That implies ginger extract might produce increasing and decreasing functions of smooth muscle via affecting receptor levels too. However, we found Gin C specifically inhibited murine myometrial contraction by inhibition of VDCCL. Ginger plant has been used to treat inflammation, rheumatic disorders, and diarrhea in traditional medicine [2,4,29]. Zingerone is thought to be the active antidiarrheal component responsible for limiting endotoxin-induced diarrhea [30-31]. Therefore, some effects of ginger extracts are not direct on smooth muscle. Meanwhile, gingerol produces dual effects (enhancing and inhibitory) on ileal contractions in guinea-pig [12-13] through capsaicin-sensitive neurons [32]. Shogaol- [6] from ginger can also inhibit vascular smooth muscle proliferation by activating specific signaling pathways [16].

A cyclooxygenase-related system in vascular smooth muscle may be involved in regulating eicosanoid-induced contraction [16]. Additionally, gingerols exhibit various effects on the cardiovascular system [16] while zingerone may activate the same capsaicin receptors and/or a common pathway in trigeminal ganglion neurons [32]. Some other Gin C components such as ginerols and/or shogaol could also inhibit uterine contractility. Therefore, extracts from ginger produces diverse effects on different organs via various actions. From these results, we tried to exclude involvement of nerves and other K+ channels by other ginger extracts [33]. As shown in Figure 3B & 3D, the relaxing effect of ginger extract was studied in the presence of TEA, nerve blocker cocktail. In addition, involvement of nitric oxide (NO) in the action of antinocipective activity by ginger extract was also reported [34]. Therefore, we also studied and found inhibitory effects of Gin C in the presence of and L-NAME (100 μM) on murine uterine smooth muscle (Figure 3C). Our results suggest that Gin C may produce murine uterine relaxation by inhibiting VDCCL. This is first report showing that inhibition of uterine smooth muscle contractility by ginger extract obtained by dichloromethane fraction (Gin C). Our results revealed the possibility that Gin C inhibited High K+-, OXT-, PGF2α-, and ACh-induced uterine contraction and spontaneous contraction of uterine longitudinal smooth muscle of mouse by inhibiting VDCCL.