Mediastinal localized air collection in a newborn can be caused by a congenital cystic mass or by pneumomediastinum resulting from pulmonary assisted ventilation for underlying lung disease. Three newborns with respiratory distress and atypical chest X ray signs have been submitted to chest CT.

Assisted ventilation in preterm infants treated for respiratory distress syndrome (RDS) may cause typically neonatal pneumomediastinum. [1] It is often anterior or anterolateral to the heart and is caused by the escape of air from the broken alveoli through the perivascular sheaths which, moving towards the hilum, finally reaches the anterior mediastinum [2]. The cause is the development of a pressure difference between the alveoli and the perivascular and peribronchial spaces with alveolar break and diffusion of air to the hilus and into the mediastinum that generate airway stretching with lung damage (volutrauma) [3,4]. The aim of this paper is to analyze these unusual patterns through an approach by multidetector CT (MDCT). We report three cases of loculated/ pseudo cystic para cardiac collections anterior and posterior to the hearth mimicking congenital and non-congenital conditions.

Three newborns with respiratory distress and atypical chest X ray signs have been submitted to chest CT. CT studies were performed on one of the following scanners: A secondgeneration dual source CT system (Siemens Somatom Definition Flash, Siemens Erlangen, Germany), with two x-ray tubes and two detectors settled at an angular offset of 95°. A Somaton Sensation 64 (Siemens Medical Solutions, Erlangen, Germany). In both the systems we used a tube current modulation (CARE Dose) with kVp: 70-80 and ref. mAs: 70. Images were reconstructed with a slice thickness of 1 mm. Kernel/Algorithm: B30, B60. With the dual source, Sinogram-Affirmed Iterative Reconstruction (SAFIRE) filter, strength of 1, was employed. None of the children required sedation for CT examinations. We did not inject contrast media because it was considered superfluous. The cases reported for the differential diagnosis studied by CT were performed with the same systems. Cross sectional imaging by MRI was obtained by a 1.5 T MRI scanner (Achieva Intera; Philips Medical Systems, Best, The Netherlands)

A male was born at 38th week of pregnancy by a regular vaginal delivery; he weighed 2570 g. The prenatal ultrasound follow-up (US) was normal. Mild respiratory distress was noted the first day of life, with occasional expiratory grunting, nasal flaring, and substernal and intercostal retractions. A chestradiography at 24 h of life revealed a left hyper-lucency shifting contralaterally the mediastinum, sharply delineating the left cardiac border and displacing the thymus cranially and laterally (Figure 1). A CT therefore performed revealed a multiloculated gas collection in the anterior mediastinum between the pericardial sac and the left thymic lobe without signs of pulmonary interstitial emphysema (PIE) or pneumothorax (Figure 1). There were numerous thin septa within it. During the second day, the patient was operated for the increasing respiratory distress. A multiloculated air- filled cystic mediastinal lesion was removed. The histopathological pattern demonstrated that the cyst walls were composed of connective tissue. The patient is healed without any complication. 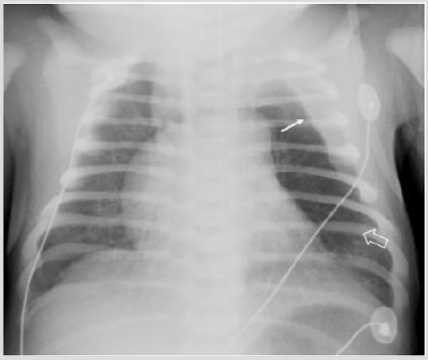 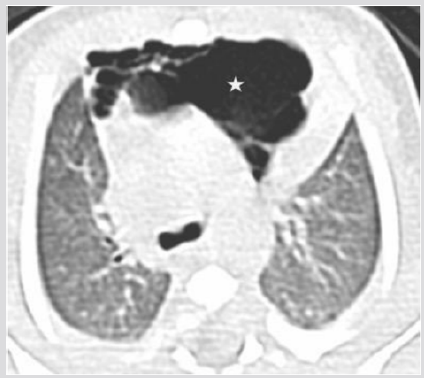 A female was born at 39th week of pregnancy by a regular vaginal delivery. Her body weight was 3100 g. Prenatal US was normal. At two days old, she presented clinical signs of respiratory depression who required supplemental oxygen. Chest X-ray showed a wide radiolucent area over the mediastinum (Figure 2). Chest CT was performed the same day. A large multiloculated mass was detected in the anterior mediastinum, with the thymus compressed upwards. There was evidence of pneumothorax without signs of PIE (Figure 2). A drainage was positioned and the case was completely resolved. 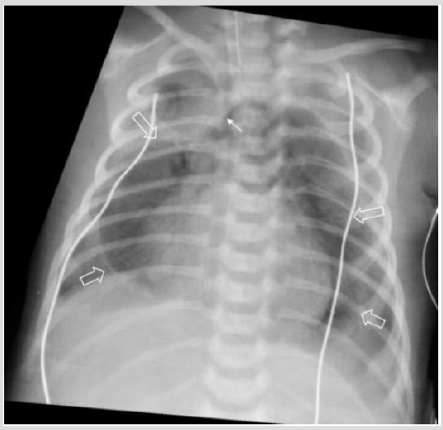 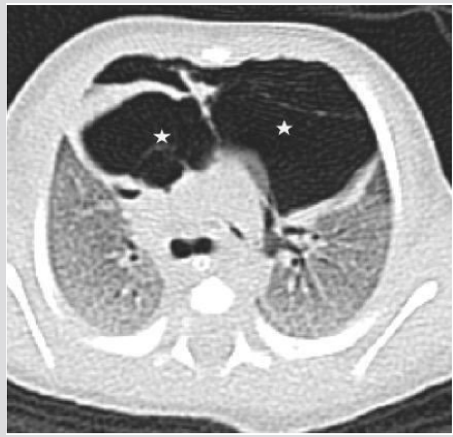 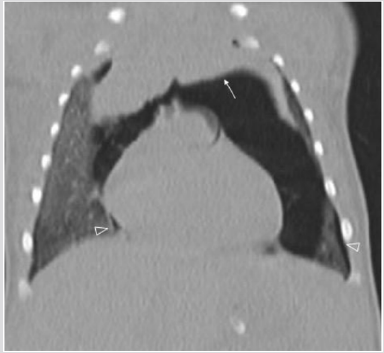 A male born at 30th week of pregnancy, of 1100-g, developed respiratory distress after delivery and chest X-ray showed the signs of a Respiratory Distress Syndrome (RDS). The baby was intubated. During the second day of life, a typical PIE was detected, on the third day of life a large retro cardiac air collection was identified. The lucency was on the midline (Figure 3). CT was performed to localize the large air collection that appeared oblong, well circumscribed, and crossing the midline. There was shift of the mediastinal structures anteriorly. The air-filled mass was interpreted either an infra-azygous pneumomediastinum or an air collection in the pulmonary ligament [5]. Over the following week, the extra ventilatory air collections is gradually resorbed: the large midline gas collection became smaller and didn’t shift laterally suggesting an infra azygous pneumomediastinum [6]. During the subsequent week, the median gas collection has shrunk but it not shifting sideways (Figure 3). 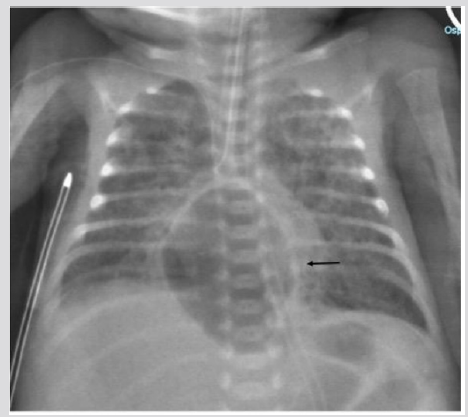 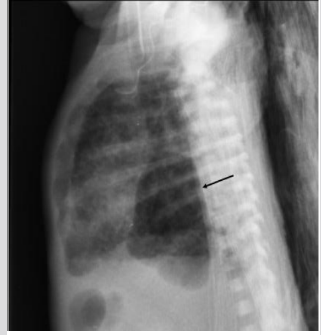 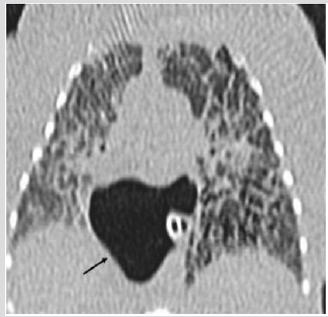 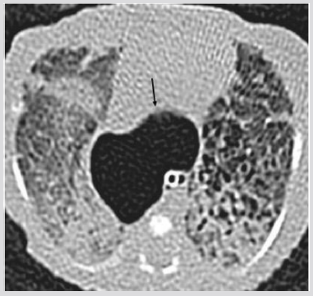 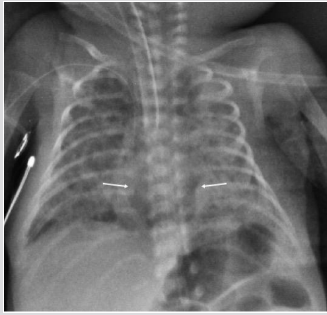 The reported incidence of pneumomediastinum is 4−25 per 10,000 live births [1]. Spontaneous pneumomediastinum in otherwise healthy newborns is relatively rare (case 1,2). Our patients (cases 1 and 2) had a pneumomediastinum without prior assisted ventilation or eventful labor [1,7]. One possible justification for the extemporaneous occurrence of a pneumomediastinum may be the vigorous inspiration at birth, causing alveolar over inflation and breach. Our cases also showed a tendency to loculate locally even if in case 2 a pneumothorax was concomitant unlike in literature. Quattromani [8] described a fascia around the great vessels and the trachea, which, at the hilus, is endless with the pericardium and with the fascia of the pulmonary vessels. This is the connection of the lungs to the mediastinum. The fascia creates the thymic capsule and interlobular septa of the thymus. Probably the air spreads along the thymic connective septa, forming a multiloculated pseudo-cystic mass. About the case 3, the infraazygous region is a latent space in the retrocardiac mediastinum. [9] This midline space is limited anteriorly by the pericardium, posteriorly by the pre-vertebral fascia, inferiorly by the diaphragm and on each lateral side by mediastinal pleura. Extension of air from this space cranially is limited by a fascia connecting the carina to the fibrous stratum of the pericardium. It is challenging to discriminate collections in this space from air inside the pulmonary ligaments. They are not truly ligaments but consist of double pleural sheaths which prolong under the pulmonary hilus either finishing in a free border or prolonging towards the diaphragm (Figure4) [2,10,11]. Air in the inferior pulmonary ligaments is described as an oval, lucent area in the PA view. It is positioned to the right or left of the spine in a posterior parasagittal position. Our case is characterized by a retro cardiac pseudo cystic collection of air crossing the midline and extending from the pericardium anteriorly to the pre-vertebral fascia posteriorly. However, lack of spread of air cranially, which was reported by Bowen and Quattromani [5] in six infants with infra-azygous pneumomediastinum could theoretically suggest a bilateral pulmonary ligament dissection. Besides, bilateral pulmonary ligament collections displace the esophagus posteriorly as in our case. Although it is entirely plausible that infraazygous air might dissect into the pulmonary ligament and conversely, there is no obvious way of determining radiographically whether air is extending into the ligaments or simply bulging into the medial lung surfaces. In the literature is reported a bilateral pulmonary ligament collection with a bilobed shape [5]. The collection into the ligament decreasing in volume is described to shift laterally. In our case the collection decreased in volume persisting in the midline until the disappearance (Figure 4). Mediastinal cysts (round parenchymal lucency or low-attenuating areas containing air and/ or fluid) are relatively uncommon in newborns [12]. An isolated cystic mass that is seen adjacent to the heart should suggest fluid filled pericardial cysts, cystic foregut malformations, lymphatic malformations, a true thymic cyst, and an anterior meningocele. Other multiloculated lucences that can mimic a mediastinal mass are: left congenital diaphragmatic hernias, a Para mediastinal CPAM (Congenital Pulmonary Adenomatoid Malformation) type 2, and cysts secondary to air leak phenomena. Pericardial cysts (Figure 5) are characteristically unilocular, fluid- filled lesions typically located at the right cardio phrenic angle (51–70%), or left cardio phrenic angle (28–38%) [13]. Histologically these cysts are lined with a single layer of mesothelial cells, with the remainder of the wall composed of connective tissue with collagen and elastic fibers. They are typically detected as an incidental sign on a chest X ray acquired in an asymptomatic patient. Cystic foregut malformations (Figure 6) result from anomalous budding of the ventral diverticulum of the primitive foregut. Usually they are single unilocular, within lung parenchyma or within the mediastinum. However, mediastinal bronchogenic cysts are located near the carina between the trachea and the esophagus and, therefore, obstruction of the main bronchi resulting in respiratory distress is a common complication [13] Lymphatic cystic malformations (Figure 7) appear as single or multiloculated fluid-filled cavities [14]. They can occur everywhere but are only rarely found within the mediastinum between the anterior chest wall and the right heart. In this location, they can be confused with a pericardial cyst. True thymic cysts (Figure 8) are typically lined by squamous epithelium, they are filled with fluid and not multiloculated [15,16]. Multiloculated cysts are acquired (postinfectious, autoimmune conditions, etc.). Anterior meningocele (Figure 9) is usually located in the right posterior chest and associated with vertebral anomalies. Mediastinal compression is common [12]. CPAM are usually diagnosed prenatally (Figure 10). At birth, there is a variable amount of air/fluid in the lesion [13,1718]. PIE (Figure11) is characterized on CT by broncho-vascular bundles in the center of air-filled cysts [3]. Even the diaphragmatic hernias (Figure12) are diagnosed in uterus. 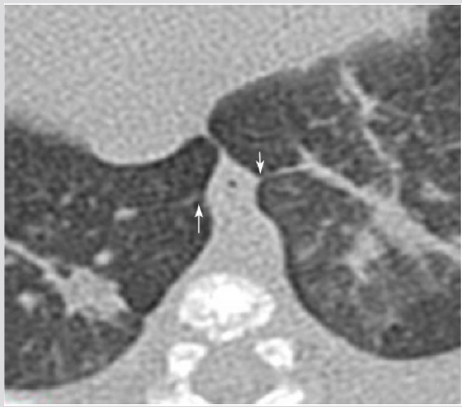 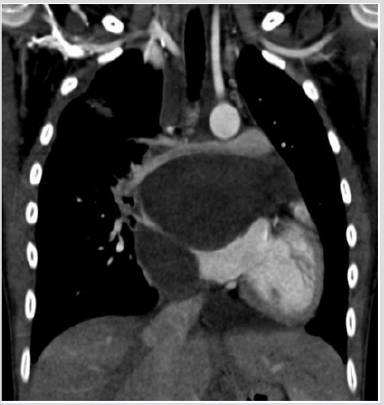 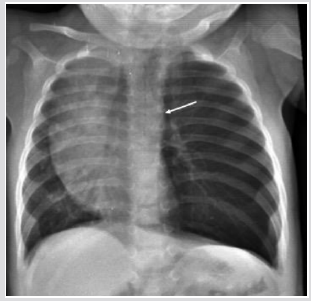 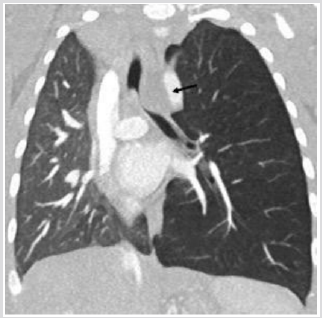 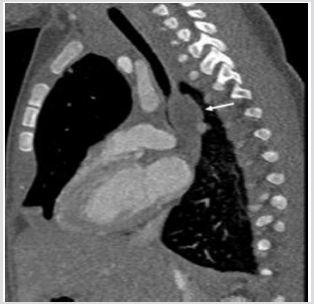 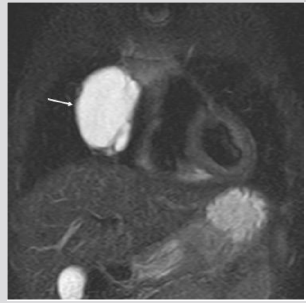 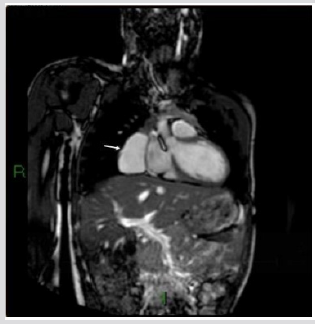 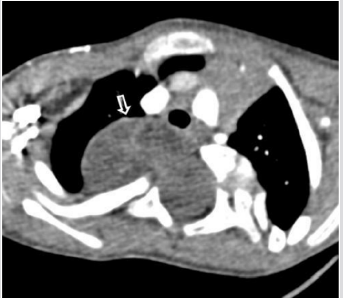 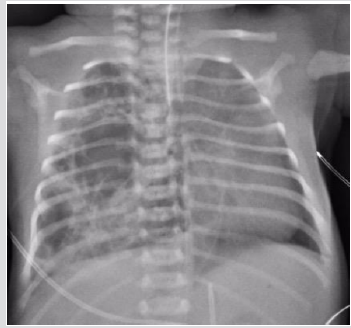 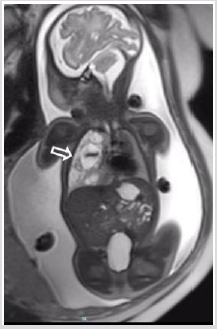 Figure C & D: CT (Coronal and Axial view) confirm the multiseptated mass with fluid inside (arrow) as not completely drained. At surgery: CPAM. 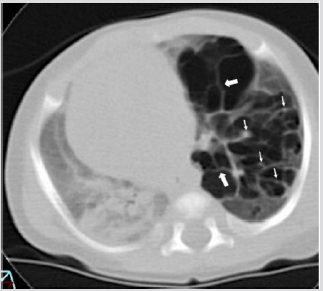 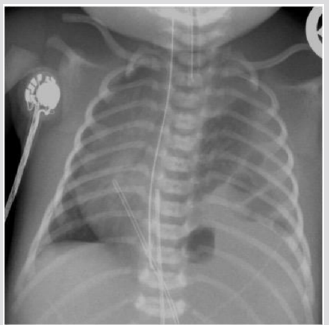 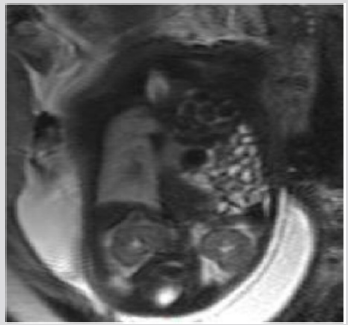 Neonatal para-cardiac cystic lesions are a diagnostic challenge because to make a differential diagnosis is not always easy, knowledge of prenatal diagnosis is critical as well as the history of birth.

Mediastinal localized air collection in a newborn can be caused by a congenital cystic mass or by pneumomediastinum resulting from pulmonary assisted ventilation for underlying lung disease. Three newborns with respiratory distress and atypical chest X ray signs have been submitted to chest CT.