Yam is the common name for some plant species in the genus Dioscorea (family Dioscoreaceae3) that form edible tubers. It constitutes one of the main sources of food for part of the population in tropical regions [1] providing up 280 calories to about 300 million people. In terms of world production levels, yam occupies the fourth position between the roots and tubers behind the potato (Solanum tuberosum L.), cassava (Manihot esculenta Crantz), and sweet potato (Ipomoea batatas (L.) Poir.) [2,3], and it is an excellent source of carbohydrates [4-6]. In 2016, world yam production was estimated at around 66 x 106 t [7] with West Africa being the main producing region with up 90% of world production and a planted area around seven million hectares [8]. In America Colombia is the largest producer [9]. When analyzing FAO statistical data, it should be taken into account that some countries, such as China, do not report yam production, so the above values may be underestimated.

Origin, Variability and Distribution of Yam

The name “yam” is probably a derivation of the African tribal word “niam”, which means flavor [10]. The Dioscorea genus comprises about 644 species [11,12] distributed entirely in the humid intertropical [13]. It is considered among the most primitive angiosperms [14]. About 25 species are edible and 10 are important as cash crops [9,14,15]. It is considered that the crop was domesticated between 7000- and 5000-years BC in parallel in West Africa, Southeast Asia and Meso and South America [16]. Due to its high genetic variability, the Dioscorea genus is divided into taxonomic sections. The 10 species that are used as food crops belong to five different sections. Table 1 shows this classification as well as its geographical origin [10,14]. Crop´s classification remains in constant study. Currently, the criterion that Dioscorea rotundata Poir is a distinct subspecies Dioscorea cayenensis subsp. rotundata Poir. J. Miège), characterized by its white tubers while Dioscorea cayenensis subsp. cayenensis, characterized by yellow tubers [9,17]. The evolutionary processes have originated an enormous diversity of species and individuals that through the processes of permanent selection have adapted to the different conditions of the globe. This accumulated genetic variability is essential for the equilibrium of the system and constitutes what is called the planet’s germplasm. If the competent authorities of many countries understood the invaluable economic and social value of their limited natural resources, among which genetic resources occupy a very high place, they would not haggle efforts to safeguard them. A continuous increase in the production and quality of food goes through the protection and effective use of plant genetic resources and this requires its collection and conservation [18]. High genetic variability gives the crop greater possibilities of coping with biotic and abiotic challenges [19,20] providing the possibility of finding better adapted genotypes. The above is shown in the following examples: Yam Mosaic virus and Yam mild mosaic Virus, which are the two most important potiviruses of this crop, produce great damage to some species like D. trifida [21], while in other species such as D. bulbifera there are no reports of economic damage in the scientific literature. On the other hand, this crop adapts to different ecosystems and can be cultivated from sea level to up 1,800 meters 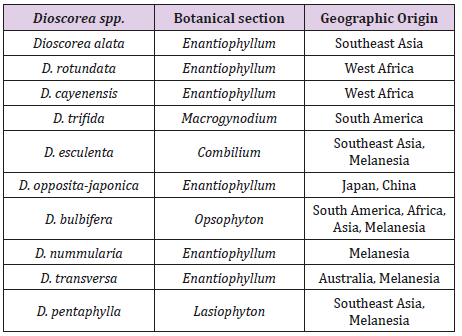 Yam for consumption can be cooked, boiled, roasted or fried [23,24]. It is a healthy, nutritional and low-fat food that supplies many of the important nutrients in the diet. Its tubers are an excellent source of energy; They contain vitamins such as thiamine, riboflavin, niacin, ascorbic acid and carotenes. In addition, they possess most of the essential amino acids: arginine, leucine, isoleucine and valine; in lesser quantity are histidine, methionine and tryptophan. Various preparation methods can be established with freshly harvested yams to give them added value and minimize product losses by reducing water activity as such, chips and flakes could be prepared [25]. Through artisanal processes that include sun drying you can obtain it is possible to obtain yam flakes or yam chips. From these flour can also be obtained, which can be reconstituted in boiling water to form a thick paste, this product is consumed in tropical areas as a source of carbohydrates [26,27]. Tambien It is also possible to obtain yogurts from yam starches resulting in acceptable texture, creamy and sweet taste [28]. Table 2 shows the nutritional composition of yam as well as its possible contribution to Recommended Dietary Allowances (RDA) according to USDA National Nutrient data base. It is important to highlight the yam´s contribution to a healthy diet. The dietary fiber input contributes to lower levels of bad cholesterol (low density lipoprotein LDL) and reduces the risk of colon cancer preventing toxic compounds in food from adhering to the colon mucous membrane. 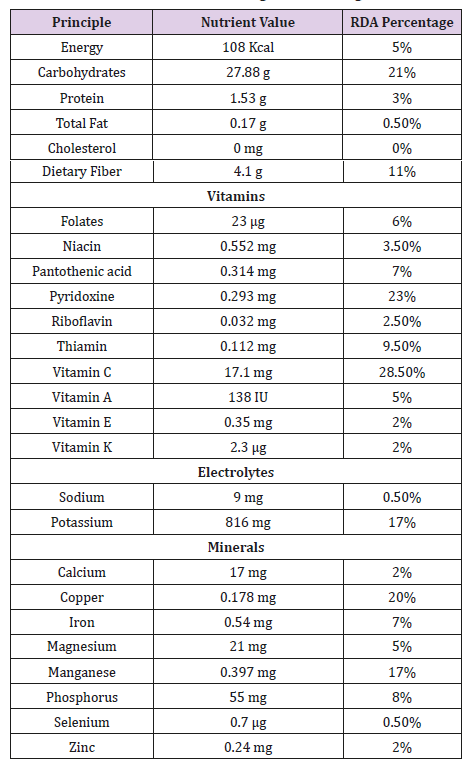 In addition, being a good source of complex carbohydrates, avoiding the constant increase in blood sugar levels. For the same reason, yam recommends as healthy foods with low glycemic index. The yam tuber is a natural source of vitamins of the B group. It can contribute part of the daily requirements of pyridoxine (vitamin B6), thiamine (vitamin B1), riboflavin, folates, pantothenic acid and niacin, which are involved in various Metabolic routes. Fresh root also contains can supply approximately 29% of the recommended levels of vitamin C; which plays an important role in the reinforcement of immune function, wound healing and bone growth, also slows cell aging Special interest should be paid to the bearing of minerals such as copper, calcium, potassium, iron, manganese and phosphorus contained in the tuber. Potassium is an important component of cellular and body fluids where it plays a fundamental role in controlling heart rate and blood pressure by counteracting the hypertensive effects of sodium

Copper and iron are essential for the production and formation of red blood cells. The body uses manganese as a cofactor for superoxide dismutase, which is an enzyme with antioxidant activity. Table 3 compares different commercial crops where you can see that their nutritional quality is similar to that of potatoes. These two crops could also be compared in two other aspects: crop cycle and post-harvest conservation. While the potato only needs between 100-120 days to complete its cycle in contrast to the 210-330 that the yam needs, the latter can be kept for 4-6 months at room temperature, the potato needs strict temperature and humidity controls for postharvest conservation, so the use of cold rooms are nedeed. Tied again! This high postharvest durability of yam, closely related to the natural dormancy of the crop and superior to other tropical roots and tubers such as cassava and sweet potato [29,30], gives yam an important value to ensure food security in tropical regions, where it can be easily preserved. Other studies have been aimed at the nutritional comparison between the main commercial yam species [31-33] & Table 4 shows nutritional elements of five edible yam species, where similar values are observed in the aspects evaluated

Table 3. Comparison with other edible crops.

Uses and Medicinal Values of Yam

Dioscorea species not only enrich the diet of the rural people but also play a significant role in many cultural, religious, and social meanings, which may vary between specific ethnic groups, specifically as ethnomedicinally important source since the beginning of its cultivation [34,35]. Around 30 species are grown for the purpose of obtaining compounds for medical use, some with anti-thrombic effects, or for the treatment of coronary diseases and pectoral angina obtained from D. zingiberesis [35]. Anti-cancer compounds have been obtained from D. collettii var. hypoglauca and D. bulbifera [36]. In addition, clinical uses of several species for the treatment of arteriosclerosis, osteoporosis, obesity, high cholesterol and cancer have been explored [37-40]. Medicinal uses of other species include treatments for arthritis, rheumatism and menopausal disorders [33, 34,41-50]. Numerous investigations relate to obtaining secondary metabolites obtained from yam and its medicinal uses (Table 5), exemplifying the possibilities of using yam for therapeutic purposes. 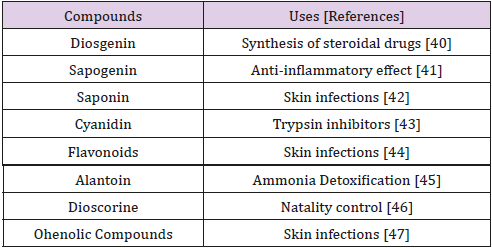 Numerous attributes favor the growth of yam cultivation in tropical regions and in conditions of organic and environmentally friendly agriculture. Its high rusticity that allows it to be cultivated with acceptable agricultural yields in low input conditions. The important nutritional contributions in terms of carbohydrates, dietary fiber, vitamins and minerals. The potential for obtaining secondary metabolites with various medicinal uses as well as the possibility of long post-harvest life without the requirement of controlled temperature conditions make it a crop that can acquire greater importance in the contribution to nutritional and dietary security of underdeveloped tropical countries

Yam is the common name for some plant species in the genus Dioscorea (family Dioscoreaceae) that form edible tubers. It constitutes one of the main sources of food for part of the population in tropical regions [1] providing up 280 calories to about 300 million people. In terms of world production levels, yam occupies the fourth position between the roots and tubers behind the potato (Solanum tuberosum L.), cassava (Manihot esculenta Crantz), and sweet potato (Ipomoea batatas (L.) Poir.) [2,3], and it is an excellent source of carbohydrates [4-6].