Twin Pregnancy in Woman with Panhypopituitarism: Case Report and Mini Review of Literature

Panhypopituitarism is a condition of inadequate or absent production of pituitary hormones. These hormones play important roles in biological processes, including metabolism, growth and development, and reproduction. Women with hypopituitarism may present amenorrhea, infertility and an increased risk of pregnancy complications, such as abortion, anemia, pregnancy-induced hypertension, placental abruption, premature birth and postpartum hemorrhage. We report a novel case of bichorionicbiamniotic twin pregnancy obtained through Assisted Reproductive Technology (ART) programs, in a woman with iatrogenic panhypopituitarism. Pregnancy was complicated by diabetes insipidus, an elective cesarean delivery was performed at 35 weeks gestation and two healthy babies, a boy and a girl, were delivered. Pregnancy in women with pituitary insufficiency are uncommon and guarantee a good outcomes neurologist, endocrinologist, gynecologist and embryologist.

The pituitary gland produces and secretes various hormones, fundamental in the regulation of endocrine function within the body, including metabolism, growth and development and reproduction [1]. Hypopituitarism is a disorder characterized by the deficiency of one or more of the hormones secreted by the pituitary gland. Onset can be acute or insidious and the most common cause in adulthood is a pituitary adenoma, or treatment with pituitary surgery or radiotherapy, frequently affecting deficiencies of Growth Hormone (GH), Follicle-Stimulating Hormone (FSH) and Luteinizing Hormone (LH) [2]. Deficiency of pituitary hormones may affect conception, pregnancy and delivery [3]. In particular, GH deficiency play significant role to poor pregnancy rate; GH acts on the ovary stimulating both directly the steroidogenesis and gametogenesis and indirectly through the release of gonadotropins and Insulin- Like Growth Factor-I (IGF-1),that amplify the action of FSH and LH on granulosa cells [4,5].

From this it can be seen that in female with GH-insufficient states, subfertility is present in a higher than normal prevalence [6] because it leads to a deficient ovarian activity, causing problems in sexual maturation, in menstrual cycle and in reproductive ability [7]. In literature there is discordance on utility of GH replacement in female with pan hypopituitarism. Some authors, for example, have observed that the addiction of GH, increasing ovarian sensitivity to endogenous gonatropins, improve fertility and pregnancy rate [4,8]. De Boer states that GH permits the recruitment of the dominant follicle from its cohort, stimulating ovulation [6]. Laron et al. observed, instead, ovulation and fertility in individual with GH resistance [9]. During pregnancy, GH Replacement Therapy (GHRT),can be stopped or continued at the same dose, or gradually reduced but the literature demonstrated that the different GHRT regimens do not affect pregnancy outcomes [10]. In women with Panhypopituitarism spontaneous pregnancy, even if rare or exceptional, is associated with high risk of abortions or fetal and maternal mortality [11].

Advances in fertility treatment has increased the hope of becoming pregnant in hypopituitary women, although only few cases of successful pregnancy and life birth have been published [3]. Fernanda’s prospective study has shown that the deficiency of the pituitary hormones plays an important role in the high number of cancelled cycles, due to low or absent ovarian response to stimulation and consequently in low pregnancy rates [12]. Co- treatment with Human growth hormone and gonadotropins may improve the follicular response in a poor responder with Panhypopituitarism, confirming the important role of GH, in follicular recruitment at early stages of maturation [13-15]. Useful, moreover, seems to be to restore the other hormonal deficiencies related to hypopituitarism, using thyroid hormones, glucocorticoids and bromocriptine in case of hyperprolactinemia [15]. In summary, optimized hormonal replacement and co-treatment with GH and estrogen may directly or indirectly increase the fertility of women with Panhypopituitarism but still pregnancy rate and achievement of live birth are poorly.

A 26-years-old white female was referred to our ART (assisted reproductive technology)-unit for treatment of primary infertility. She had transsphenoidal subtotal excision of pituitary gland for a hemorrhagic adenoma at the age of 12, resulting in panhypopituitarism. Pituitary insufficiency was treated with glucocorticoids, thyroid hormones and growth hormone substitution. At the age of 16, menstrual cycle was established by estrogen and progestin combined oral therapy. First cycle of ovulation induction was performed at the age of 25. Her 30 years old husband underwent right orchidopexy, even though his semen analyses revealed normospermia (100 Million/ml, >55% motile sperm and 12% typical sperm morphology, according to WHO 2010 criteria) [16]. The female patient showed a good ovarian reserve (anti-Millerian hormone 5.2 ng/ml, antral follicular count > 5 in both ovaries).

Controlled ovarian stimulation was performed with gonadotropin- releasing hormone analogues from the first day of menstrual cycle (Fertipeptil; Ferring Pharmaceuticals, Kiel, Germany) and human menopausal gonadotropin (Menopur; Ferring Pharmaceuticals, Kiel, Germany) containing both FSH and LH activity (1:1). Daily subcutaneous gonadotropin administration started at menstrual cycle days 3. The initial dose varied from 75 IU/d to 150 IU/d. Patient was subjected to transvaginal ultrasound scans on stimulation days 5 and 6 and every 2 to 3 days after that; at each examination, the endometrial thickness and the mean diameter of each ovarian follicle were recorded. When the leading follicle reached 22 mm mean diameter and the serum level of 17B-estradiol was 1405 pg/ml, 250 mcg of recombinant hCG (Ovitrelle; Merck, Bari, Italy) were administered. In according to patient’s treatment protocol, 48 hours later transvaginal ultrasound-guided follicle aspiration was performed: four oocytes were recovered from the aspirated follicle fluid, three of which were inseminated by Intra Cytoplasmatic Sperm Injection (ICSI). All three oocytes were fertilized. Two embryos were transferred to the patient’s uterine cavity on the second day. Unfortunately, serum b-hCG test 15 days after embryo transfer, gave a negative result. Three months later, the patient began a second ovulation induction protocol with Fertipeptil from the first day of menstrual cycle and a combination of Gonal F 37.5 UI/d (Serono, Rockland, MA, USA) and Menopur 75 UI/d from cycle day 2, for a total of 600 UI of Gonal F and 1200UI of Menoptur. Endometrial thickness and the diameter of each follicle was controlled every 2 days using transvaginal ultrasound. An endometrial scratch on cycle day 10, during hormonal stimulation, was performed. At day 17 of hormonal stimulation, at a dose of 17B-estradiol of 1689 pg/ml, an 18 mm leading follicle was detected and Ovitrelle 250 mcg was given. 36 hours later the patient underwent oocyte pick-up: four oocytes were recovered from the aspirated follicle fluid and were inseminated by ICSI.

Insemination led to fertilization of four oocytes. Five days later, two blastocysts were transferred to the uterus. Pregnancy was confirmed with serum b-hCG test 14 days after embryo transfer. An ultrasound examination at 6 weeks of amenorrhea demonstrated two gestational sacs. Bichorionic biamniotic twin pregnancy was confirmed by first trimester ultrasound. Patient continued hormone replacement therapy with hydrocortisone (10mg/day), L-thyroxine (100 ug/day) and Liothyronine (5 mg/ day) but not GH replacement. No severe problems during the rest of the pregnancy were detected until week 35, when the patient showed a form of Diabetes Insipidus characterized by polyuria and polydipsia. Endocrinological advice, introduced a therapy with desmopressin (Minirin(®))and electrolyte and water balance. Therefore, depending on gestational age and completion of antenatal corticosteroid therapy for prophylaxis of respiratory distress syndrome, an elective cesarean delivery was performed at 35 weeks and 4 days of gestation. Two healthy babies, a boy and a girl, were delivered (2234 g the boy and 2015 g the girl). Second twin (female) had a true knot of umbilical cord.

Panhypopituitarism patients often do not get spontaneously pregnant, but, now, thanks to the practices of assisted reproduction they can reach ovulation and pregnancy. A literature review was performed via an automated search for information on the database: MEDLINE (Pub-Med) to identify and summarize all relevant publications on Panhypopituitarism and pregnancy. The inclusion criteria were for case reports on pregnancy in panhypopituitarism women. We excluded cases reports that the pituitary insufficiency developed after (eg. S. Sheenah) or during pregnancy and those who were referring to cases of panhypopituitarism in the male or newborn. We assessed the eligibility of articles from the titles and abstracts, and extracted the information related to our target subject. We found 62 publications in PubMed with the keywords. We selected 17 papers that met the objectives of our research and the exclusion criteria (Figure 1). In all case reports in the literature, except that of I. Lata [11], pregnancy has occurred thanks to techniques of ARTs [13-15,17-29] (Table 1). However, success rate was lower than in other unovulatory infertility. Although hypopituitary patients have increased risks for mother and fetus as postpartum hemorrhages, transverse lie, high rate of cesarean deliveries and small, for gestational age, neonates [3]. Multiple pregnancies showed worse outcomes, leading to a strict recommendation to avoid multiple pregnancies in these women [30,31]. In literature are described only three cases of twin pregnancies with good outcomes [20,25,27]. Pituitary hormone deficiency joked an important part in the adverse effect on realizing pregnancy. In particular, GH deficiency is an important cause for poor pregnancy rate. However, replacement of growth hormone is still under debate. A. Salle, Drakopoulos and John K. Park [13-14,25] confirming the important role of co-treatment with conjugated estrogen and GH, in follicular recruitment at early stages of maturation. In our case, for example, the patient did not take GHRT neither before, nor during pregnancy. Therefore, hormone replacement therapy (cortisone and thyroid hormones) in hypopituitary women is crucial during pregnancy. The role of endometrial scratch in infertile women is still much debated in literature even if some studies have shown that the endometrial local injury before embryo transfer increases embryo implantation and the live birth rate [32-36]. 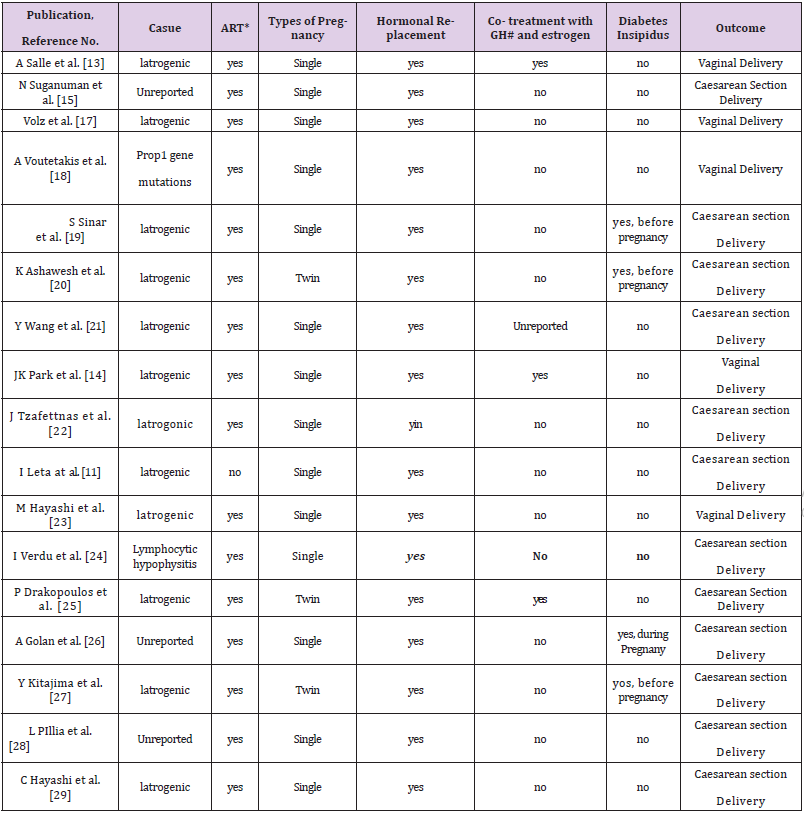 Table 1: Main features of the cases of panhypopituitarism in pregnancy reported in the literature. 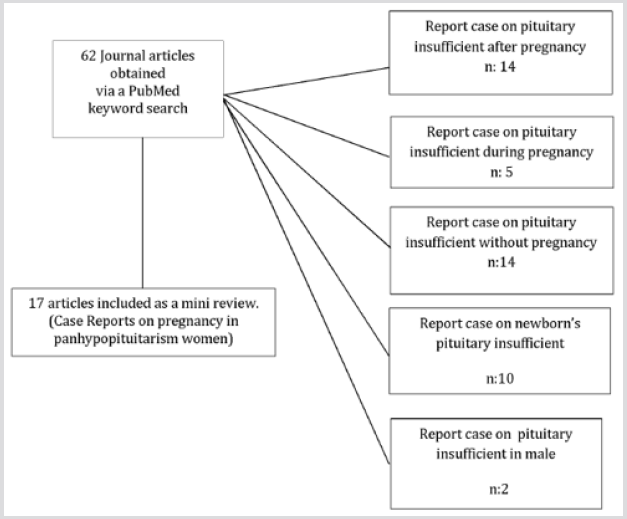 Diabetes Insipidus (DI) is a rare complication that occurs in about 1 in 30,000 pregnancies [37]. Gestational DI usually appear at the end of second or in third trimester [38] and spontaneously resolves about 2-3 weeks postpartum. It is caused by the increased metabolism of the Antidiuretic Hormone Vasopressin (AVP) produced by the placental vasopressinase. Its activity is proportional to the placenta weight, explaining the higher vasopressinase activity in the third trimester or in multiple pregnancy [39]. In some cases, diagnosis is difficult and delayed because polyuria during pregnancy is considered normal and does not cause complications [40]. In this case diagnosis to reveal any underlying pathology is very important to prevent maternal and fetal morbidity [41]. In cases where the DI is present before pregnancy, therapy with desmopressin and electrolyte and water balance should be initiated immediately with extreme accuracy, to ensure a good outcome [19-20,27].

To establish a pregnancy in patients with panhypopituitarism and ensure a good outcome especially without maternal-fetal complications it is very complex. This type of rare pregnancies requests to be closely followed by neurologist, endocrinologist, gynecologist, embryologist working in strict cooperation.

Authors claim to have no conflicts of interest.

Twin Pregnancy in Woman with Panhypopituitarism: Case Report and Mini Review of Literature

Panhypopituitarism is a condition of inadequate or absent production of pituitary hormones. These hormones play important roles in biological processes, including metabolism, growth and development, and reproduction. Women with hypopituitarism may present amenorrhea, infertility and an increased risk of pregnancy complications, such as abortion, anemia, pregnancy-induced hypertension, placental abruption, premature birth and postpartum hemorrhage. We report a novel case of bichorionicbiamniotic twin pregnancy obtained through Assisted Reproductive Technology (ART) programs, in a woman with iatrogenic panhypopituitarism. Pregnancy was complicated by diabetes insipidus, an elective cesarean delivery was performed at 35 weeks gestation and two healthy babies, a boy and a girl, were delivered. Pregnancy in women with pituitary insufficiency are uncommon and guarantee a good outcomes neurologist, endocrinologist, gynecologist and embryologist.