Results: We summarize 34 cases with seronegative or uncertain HIV antibody testing results using ELISA or WB methods, which were reported internationally between 1994 and 2017.

Normally, HIV infections can be diagnosed with rapid tests or enzyme-linked immunosorbent assays (ELISA), and confirmed by Western blot (WB) methods. However, in rare situations where patients are not producing antibodies in sufficient quantities, these test methods yield negative or inconclusive results. These situations include acute infection, during which the well-known “window period” occurs when viral infection is newly present, but the host has not yet had enough time to generate antibodies to viral antigens Another low-antibody situation occurs when patients are in the advanced stages of AIDS and are so immunocompromised (as evidenced by their extremely low CD4 cell counts) that they fail to make enough antibodies to be detected by conventional antibody-based methods. In these extreme situations, laboratory results are not consistent with clinical manifestations, which can lead to misdiagnosis or misjudgment of prognosis [1]. In this article, we summarize previous domestic and international reports of HIV diagnosis in patients with negative or uncertain results on antibody-based HIV testing due to insufficient antibody levels [2-3].

We had a reference to the literature published in the journal AIDS in 2010 by Spivak et al. [4] which identified 25 cases of HIV infection worldwide between 1994 and 2009. Using the same method, We performed a comprehensive literature search in both Chinese, using the scientific and technological literature service system of

the Chinese Center for Disease Control and Prevention (China CDC; http://literature.chinacdc.cn/), and in English, using the online search engine of the United States National Library of Medicine (US NLM; https://www.ncbi.nlm.nih.gov/pubmed/) between 1994 and 2017. Search terms used were “HIV seronegative” and “HIV uncertain.” Articles were screened to ensure that they reported on one or more HIV cases with negative or uncertain HIV antibodybased testing results at the time of diagnosis of HIV infection. 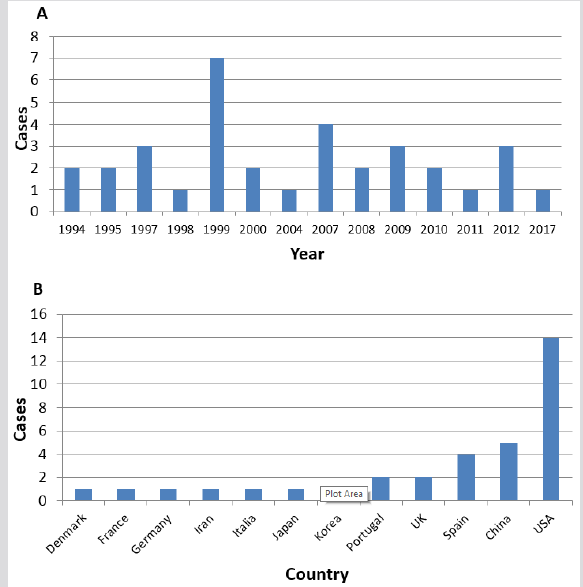 Figure 1: Year [A] and country [B] of HIV cases that were either HIV-seronegative or uncertain upon initial antibody testing worldwide, 1994-2017.

Between 1994 and 2017, a total of 28 publications, documenting 34 individual cases, met the study eligibility criteria were included in the analysis. 5 cases were found and reported in China. In addition to the 25 cases summarized by Spivak et al., another 4 cases were reviewed and collated, they were NO.27,32-34 cases in Table 1. Demographic and clinical characteristics of all 34 cases are tabulated in Table 1, and the numbers of cases by year, and by country are plotted in Figure 1. 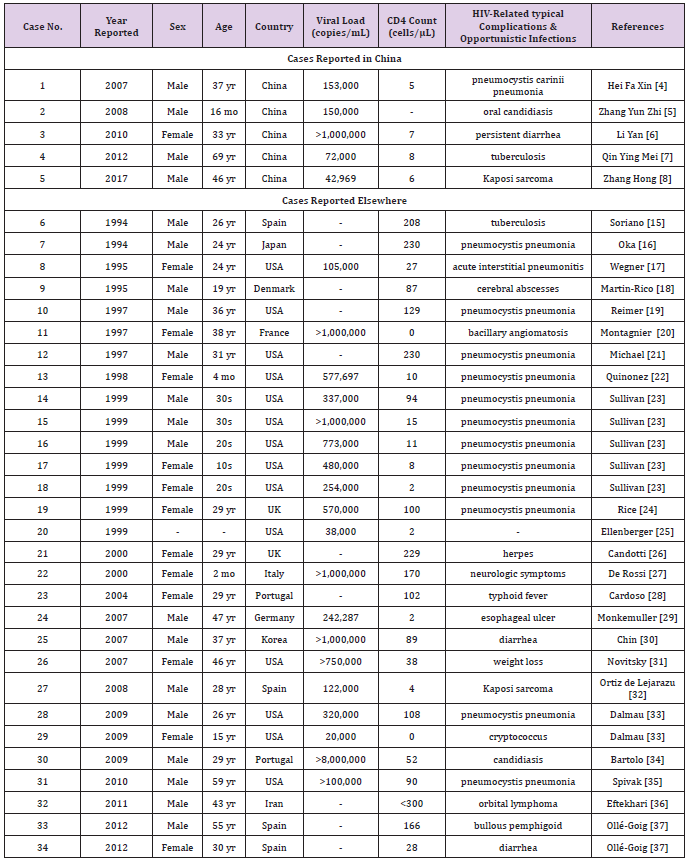 Table 1: Demographics and clinical features of HIV cases that were either HIV-seronegative or uncertain upon initial antibody testing worldwide, 1994–2017.

In China, Hei Faxin et al. [5] (Beijing) first reported a case of insufficient HIV antibodies affecting diagnosis in 2007. This case involved a 37-year old male patient who had a positive ELISA result, but an indeterminant WB result—only the gp160 band was observed. This was insufficient evidence for an HIV diagnosis based on the HIV testing algorithm at that time. However, the patient reported male-male sexual contact, and presented with symptoms that were consistent with the typical manifestation of AIDS, including Pneumocystis carinii pneumonia and mucosal fungal infections. Therefore, to further explore a diagnosis of HIV infection, a second blood sample was obtained and tested for HIV antibodies, HIV viral load (VL), and CD4 count. Antibody results remained unchanged. However, VL was 153,000 copies/mL, and CD4 count was only 5 cells/μl, and thus, the patient was diagnosed with HIV infection and AIDS. Another case was reported by Zhang YunZhi et al. [6] (Shanghai) in 2008 involving a16-month-old child born to a mother with HIV infection.

The infant was tested several times for HIV infection using rapid antibody test kits and results were consistently negative despite the child having multiple AIDS-related symptoms. Eventually, the child was diagnosed with HIV infection by quatitative nucleic acid testing. In 2010, Li Yan et al. [7] (Guangdong) reported on the case of a 33-year-old female patient who had tested a positive result by HIV ELISA, but indeterminant by HIV WB–only the p24 band was detected. Her husband was diagnosed with AIDS in June 2005, she accepted an HIV antibody test. Based on obvious family transmission that her husband was HIV positive before her antibody test and clinical manifestations of AIDS complications such as fungi, monilial infection, and pneumonia, VL and CD4 testing was ordered. VL result was >1,000,000 copies/mL and CD4 cell count result was 7 cells/μL, and hence, the patient was diagnosed with HIV infection.

In 2012, Qin Yingmei et al. [8] (Guangxi) reported on a 69-yearold male patient, who had been diagnosed with HIV infection in 2011, and had progressed to AIDS as evidenced by his having a variety of opportunistic infections including tuberculosis, shingles, and others. He also exhibited a serious loss of HIV antibodies. During follow-up WB testing, the typical bands indicating HIV infection decreased in number and intensity, and finally only the gp160 band remained, indicating that the level of antibodies has decreased over the course of AIDS progression. Most recently in 2017, Zhang Hong et al. [9] (Beijing) reported on the case of a 46-year-old male patient with a positive HIV ELISA result and Kaposi’s sarcoma, yet had a negative HIV WB result. The patient was then tested for HIV VL and CD4 count. His VL was 42,969 copies/mL, his CD4 count was 6 cells/μL, and therefore he was diagnosed with HIV infection.

Outside of China, a review was published in the journal AIDS in 2010 by Spivak et al. [10] which identified 25 cases of HIV infection worldwide between 1994 and 2009, where HIV antibody-based testing methods yielded negative or uncertain results. All of these patients had two or more negative results on HIV ELISA testing yet had positive results on antigen or nucleic acid testing. Another 4 cases were reviewed, they were NO.27,32-34 cases in Table 1. NO.27 case reported in 2008, but not included in Spivak et al. [10] review, was found in a paper published by Ortiz de Lejarazu et al. [11] In this case, a 28-year-old male presented with Kaposi’s sarcoma and Pneumocystis carinii pneumonia. Both HIV rapid testing and HIV ELISA testing results were negative, but his VL was 122,000 copies/ mL and CD4 count was only 4 cells/μL. Between 2010 and 2017, we were only able to find 3 additional cases of HIV patients with false negative antibody tests, one from Iran and two from Spain, they were NO.32-34 cases in Table 1.

In summary, “uncertain” or even “negative” results of HIV antibody-based testing methods should be questioned when HIV disease-related symptoms or opportunistic infections are present and/or when the patient is identified as being at high risk of HIV infection. Although it is rare that individuals would be tested in the “window period” of acute, early infection or after progressing into advanced AIDS disease, when quantities of circulating antibodies are very low, the likelihood of false-negative/uncertain results should not be ignored. For diagnosis verification, HIV nucleic acid testing is the most convincing indicator. Viral replication will continue even as quantity and diversity of antibody levels decline and HIV nucleic acid testing can be used as an effective, reliable method to verify HIV diagnosis.

Due to technical and financial constraints, HIV nucleic acid testing currently is underused as a diagnostic tool for HIV infection in China and elsewhere. However, to prevent misdiagnosis and treatment delay, we recommend it be used to help diagnose patients suspected of being in the very early stages of HIV infection and those who present with HIV disease-related symptoms and opportunistic infections common in the advanced stages of AIDS in China [12]. This recommendation has been documented by the Third Edition of AIDS Diagnosis and Treatment Guidelines (2015) of China [13]. HIV nucleic acid testing was also included as a confirmation strategy and part of the algorithm for the HIV confirmation process in the National Guideline for Detection of HIV/AIDS revised by the China CDC in 2015 of China [14].

We summarize 34 cases with seronegative or uncertain HIV antibody testing results using ELISA or WB methods, which were reported internationally between 1994 and 2017. Five of these cases were reported by China. Although all cases were antibodynegative or uncertain, nucleic acid testing results were positive, CD4 cell counts were low, and typical HIV-related complications and opportunistic infections were present in all cases. These cases demonstrate the crucial need for HIV nucleic acid qualitative or quantitative detection for diagnosis of HIV infection when antibodybased methods yield negative or uncertain results.

Results: We summarize 34 cases with seronegative or uncertain HIV antibody testing results using ELISA or WB methods, which were reported internationally between 1994 and 2017.