The present study was based on data collected from 785 adults investigated from 2% randomly selected families of the students of American International University – Bangladesh. Among the investigated adult’s 49.4 percent were suffering from different types of non-communicable diseases. A big group (85.3%) of NCDs affected people were the patients of diabetes. The different types of NCDs were significantly associated with socioeconomic variables. From factor analysis it was noted that marital status, age, occupation and income of the adults were responsible variables for diabetes. The responsible variables for heart disease were smoking habit, gender age and intake of restaurant food

Non-communicable diseases (NCDs) are medical conditions which last for longer duration generally with slow progression. The disease is non-infectious and non-transmissible but is a chronic one with a power to create health hazard of different types if it starts once in the body of human being. There are four main types of NCDs and these are cardiovascular diseases ( like heart attacks and stroke) , cancer, chronic respiratory diseases ( like chronic obstructed pulmonary disease and asthma), and diabetes, kidney diseases, osteoporosis. The other health hazards of NCDs are sleep problem, liver disease, early puberty, eating disorders, skin infection, hepatitis, intercrenial pressure [1], psychological [2], depression and physical [3,4]. Some of the above-mentioned diseases result in rapid death. These diseases are autoimmune diseases, heart diseases, stroke, cancer, etc. The risk factors for NCDs are (i) high blood pressure, (ii) high blood glucose level, (iii) high level of fats in the blood, overweight and obesity. Obesity and overweight are significantly associated with type II diabetes [5-7].

Diabetes is a component of NCDs and NCDs are the major health burden in both developed and developing countries [5]. There were many studies about the global, regional and national burden of diseases especially the NCDs and death due to these diseases [5,8- 10]. More than 36 million people die annually from NCDs and this figure is 63% of all annual deaths [11,12]. This total death includes 14 million people who die too young before the age 70 years. More than 9 million of all deaths attributed to NCDs occur before the age 60 years and 80% of all NCDs deaths occur in low- and middleincome countries [13]. Like many low-income countries Bangladesh is in the midst of an epidemiologic transition where the burden of disease is shifting from profile dominated by infectious diseases, under-nutrition and conditions of childbirth to one increasingly characterized by NCDs [12]. The NCDs are responsible for half of annual mortality (51%) and almost half of the burden of disease (41%) [13]. Recent estimate observed in 2006 indicated that NCDs represent 68% of total death as against only 11% of total deaths due to communicable diseases [12]. The major causes of death in Bangladesh gradually shifted from acute infectious and parasitic diseases to NCDs.

Diabetes is one of the major components of NCDs. It is associated with prolonged ill health and death due to vascular diseases [13-16]. Around 415 million people have diabetes in the world and 78 million people are in South-east Asia region; by 2040 this will rise to 140 million. Bangladesh is one of the 6 countries of South east Asia. There were 7.1 million cases of diabetes in Bangladesh in 2015. The prevalence of diabetes in adults (20-79 years of age) was 7.4% in Bangladesh [17]. The risk factors for cardiovascular disease are glucose and lipid abnormalities and the prevalence of this disease is a major factor due to diabetes in both developed and developing countries [18]. Diabetes is prevalent among 10% people of Bangladesh and according to the International Diabetes Federation, the prevalence will be 13% by 2030 [19]. Tobacco smoking is another component of NCDs. It is widely used additive substance with an estimated 1.3 billion smokers worldwide and a global projected tobacco-induced death at over 6 million annually [20]. A household survey in Bangladesh estimated that tobacco-related illness was responsible for 16% of all deaths in the country [21].

It was observed from a study that some socioeconomic characteristics were responsible to enhance the diabetes and diseases related to tobacco smoking [20,21]. In many studies it was noted that socioeconomic variables were associated with obesity and overweight and the diseases related to these factors [22-25]. In this paper an attempt was made to identify the most responsible factors for particular type of NCDs.

The present analysis was conducted in the American International University - Bangladesh (AIUB) using the data collected from 785 respondents. The investigated respondents were the family members of age 18 years and above, where the families were selected randomly from 2% students of the university during Fall 2015-16 semester. The selected students were instructed to collect information from their adult family members through a pre-designed and pre-tested questionnaire. The questionnaire contained questions related to socio-demographic characteristics of each person. It also contained questions related to type of disease, duration of suffering from the disease and information related to treatment. Some of the variables were qualitative in nature. For analytical purpose, all the variables were measured in nominal scores. The investigated respondents were classified by the type of non-communicable diseases and the association between these diseases and each of the socio- demographic characteristic was investigated. Significant association was decided by the p-value P ≤ 0.05. Some of the respondents were suffering from one or more of the NCDs. For each type of disease the most responsible factor was identified by factor analysis [26-27]. 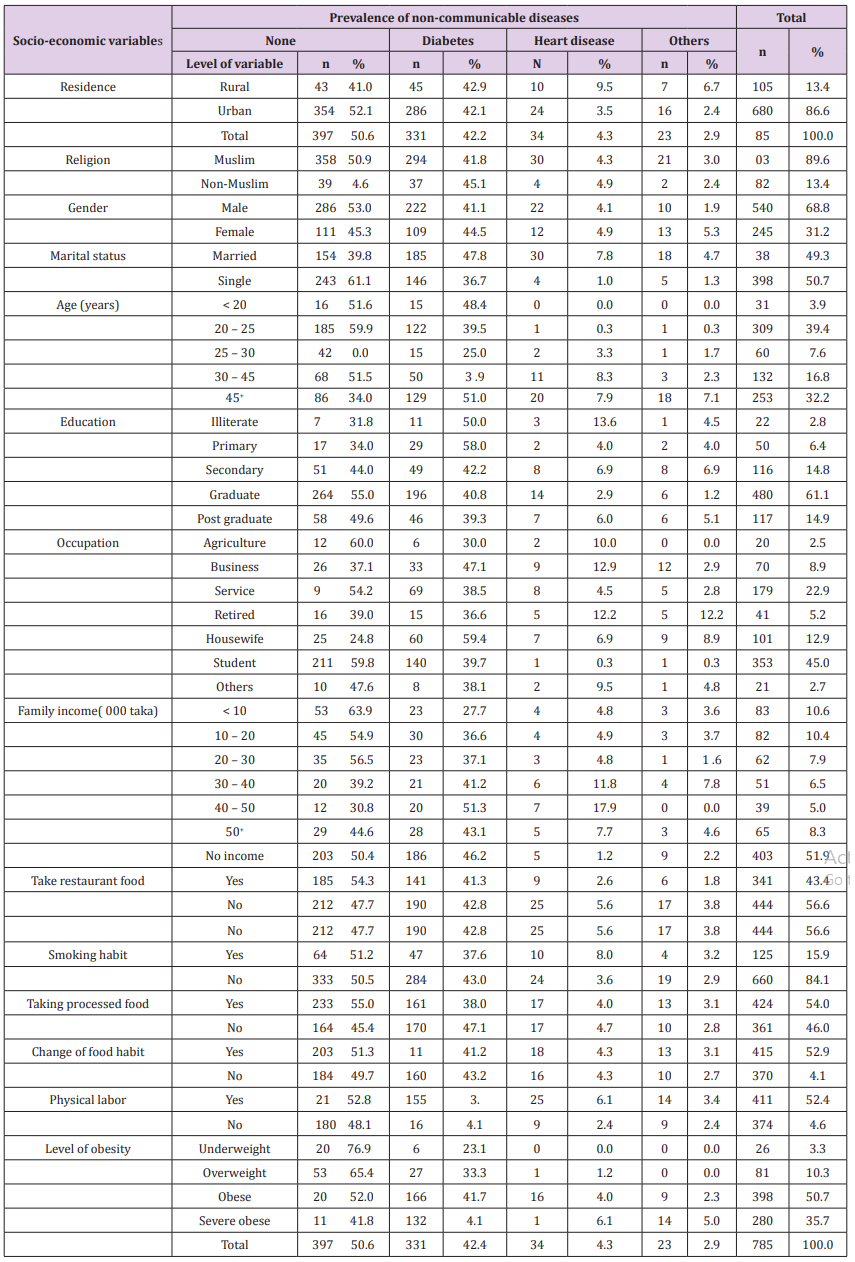 Table 1: Distribution of respondents according to prevalence of non-communicable diseases and socio-economic characteristics.

The sedentary activity [30] is a risk factor for obesity and prevalence of diabetes. The risk of this risk factor cannot be avoided completely but can be reduced by doing physical activities. The analysis of this data indicated that higher portion (52.3%) of the adults were involved in physical activities and prevalence of NCDs (45.7%) was less among this group of adults. More diabetic patients (46,9%) were observed among those who were not involved in any physical labor (47.7%). Significant association between physical labor and prevalence of NCDs was noted [ x2 = 11.593, p- value = 001]. The coefficient of association between involvement in physical labor and prevalence of NCDs was 0.121. The odd ratio 1.19 indicated that those who were not doing any physical labor were exposed more to NCDs by 19 percent. Obesity and NCDs are highly associated characteristics [ 5-7,16-18,23-25] especially the type II diabetes and obesity. This study also indicated that level of obesity and prevalence of NCDs were significantly associated [ x2 = 29.757, p –value = 0.000]. The coefficient of association between these two characteristics was 0.191. Majority (50 .7%) of the investigated adults were obese and 41.7 percent of them were suffering from diabetes. The diabetic patients among severe obese respondents were higher (47.1%). Among this group heart patients were also more (6.1%). The odd ratio 2.35 indicated that obese and severe obese respondents were more exposed by (2.35 %) to NCDs compared to overweight and underweight group of respondents. The above analysis and presentation of the results indicated that most of the socioeconomic variables were significantly associated with levels of NCD. The main objective of the analysis was to identify the most responsible variable for a particular type of NCDs. The identification was done by factor analysis for different types of diseases.

Among the respondent’s 42.2 percent were diabetic patients and 4.3 percent were suffering from heart problem. Only 23 adults were suffering from different types of diseases. A big group of respondents (50.6%) were free of any type of NCDs. Thus, the factor analyses were done separately for the diabetic patients and the patients with heart problem [25,29]. The factor analysis detects some of the components to explain maximum variation in the data set. The components are detected with respect to eigenvalues. Each component is a linear combination of the variables used for factor analysis. The responsible variable is identified by the highest value of coefficients of linear combination. For the present analysis the variables used were residence, religion, gender, marital status, age, education, occupation, income, food habit, intake of restaurant food, intake of processed food, smoking habit physical labor, level of body mass index. For the detection of the components the restriction on eigenvalue was 1.5 so that the detected components could explain maximum variation in the data set.

For factor analysis the justification of the inclusion of variables was decided by KMO statistic, where the value was KMO= 0.688 with = 920.155 and p –value = 0.000 indicating that the variables were sufficient for analysis. This analysis detected two components. The results were shown below: The analysis indicated that the most responsible variable for prevalence of diabetes was marital status followed by age, occupation and income For this analysis KMO = 0.417 giving = 149.649 with p –value = 0.000 indicating that the included variables were sufficient for the analysis. It was observed that for the heart problem the most responsible variable was smoking habit followed by gender, age and intake of restaurant food. The above findings are consistent with findings observed earlier [4,29].

The present analysis was based on data collected from some randomly selected families of the students of American International University – Bangladesh. The total investigated units were 785. Among them 49.4 percent were affected by any one of the non-communicable diseases. However, 42.2 percent were the diabetic patients. Only 4.3 percent were suffering from heart problem and 2.9 percent were the patients of other types of non-communicable diseases. Most of the socioeconomic variables were significantly associated with the prevalence of non-communicable diseases. This finding was consistent with other findings reported in both home and abroad [14-18,20-24]. The present analysis indicated that the rural people, female, currently married people, adults of ages 45 and above, higher income group of people were at more risk of NCDs. The risk of housewives and currently married people were more than double compared to the risk of people of other categories. Those who killed time by doing sedentary activities instead of doing physical labor their risk for NCDs was more compared to the risk of people involved in physical labor. Like other studies [14- 18] obesity was the responsible factor for diabetes.

The non-communicable diseases are the leading cause of death globally. Each year 15 million people die from NCDs between the ages 30 to 69 years. Over 85 percent of these premature death occur in low- and middle-income countries [13]. The prevalence of NCDs and death due to it cannot be avoided but under proper action plan its prevalence can be reduced. Government and health planners can formulate health strategy in such a way that the action can be taken so that

(i) People can be encouraged to halt the rise of body mass index as it is the major source of obesity,

(ii) To control the diabetes people can be encouraged to participate in blood screening program,

(iii) People can be encouraged to do some sorts of physical labor before or after their normal routine works,

(v) Motivation campaign is to be conducted to give up smoking habit, and to join counseling campaign for drug therapy so that heart attacks can be reduced,

(vi) Motivation campaign can be conducted to encourage people to take hygienic and low-calorie food,

(vii) People can be encouraged to avoid snacks and other restaurant foods,

(viii) Action can be taken so that basic technologies and essential medicines are available to the common people so that major non-communicable disease can be treated easily. Public health authority can play a decisive role for the above action plans.

The present study was based on data collected from 785 adults investigated from 2% randomly selected families of the students of American International University – Bangladesh. Among the investigated adult’s 49.4 percent were suffering from different types of non-communicable diseases. A big group (85.3%) of NCDs affected people were the patients of diabetes. The different types of NCDs were significantly associated with socioeconomic variables. From factor analysis it was noted that marital status, age, occupation and income of the adults were responsible variables for diabetes. The responsible variables for heart disease were smoking habit, gender age and intake of restaurant food