Identification of drowing in freshwater or saltwater still controversial. The recovered bodies form water and movement of cadavers made the task of differentiation of two types of drowing so difficult. To better understand the pathophysiology and PMI changes in drowing, we use 36 albino rats were exposed to induction of drowing in freshwater and or saltwater and recovered bodies were kept to 24 or 48 hrs for checking the changeable PMI markers between fresh or saltwater. Notably, brain of saltwater drowning show severe vacuolation in the brain parenchyma, heart is showing death of cardiomyocytes and increases in the interstitial spaces and lung displays pulmonary atelectasis and over distended alveoli with air with rupture of capillaries and cellular death of interstitial cells. While this pathological feature in freshwater is less prominent than saltwater. Fresh water drowned rats showed an increase in level of LDH, Albumin, total protein, sodium, potassium and chloride in postmortem time dependent manner.

Notably, cholesterol and CPK were fluctuated levels in fresh water drowned rats and levels of triglycerides and calcium were time dependent decreased. However, drowning in saltwater, retard analysis and protein degradation in first 24 after rat’s corpse recovered from water, then again started with evidence of increase total protein and albumin. While LDH and sodium were increased until 24hrs and then decreased. Moreover, there were a time dependent increase of triglycerides, CPK and calcium in postmortem drowned rats in saltwater and decreased the level of cholesterol, potassium and chloride in the water drowned rats. Intriguing, that collagen deposition and immunostaining reaction of IL-6 considered as a good marker for differentiation of tissue of lung and heart between different causes of death as it increased in saltwater >fresh> natural induced death. In conclusion, biochemical markers of PMI are causes of death dependent and could differ from case to another.

Drowning is the type of violent asphexia of respiratory dysfunction from submersion/immersion in liquid resulted in death [1-4]. Diagnosis of the drowning of recovered animals from fresh water is very important in forensic medicine, legal and insurance [3]. There several effects of drowning on the corpse of drowned rats. The organ weights for the lung and brain of drowned rats were increased in the experimental drowning group compared to 24-hour post-mortem immersion group. while the mean heart weight was not [5]. Differentiation between fresh water and saltwater drowning on forensic medicine still controversial [6] as the external examination and the corpse gross findings are in most of the reported cases not specific and there are no clear laboratory investigations for diagnosis of drowning especially when dead is moved away of water resources (Figure 1). The diagnosis of drowning considers one of the major issues in forensic medicine, especially when there is a delay in recovering the case [7]. The diagnosis of drowning based on pathological changes is often a difficult task, as the typical features of pulmonary edema and congestion are nonspecific [8,9]. Recently, immune-reactive proteins like IL-6, aqp5 and others were used for identification of bodies recovered from seawater [10-14]. The rationale of this study is exploring that biochemical and cytokines could be distinguished seawater and freshwater drowning and these changes may be differing when cause of death is changed and so biochemical marker still controversial up to now.

Animal procedures were conducted with the accordance of the animal care committee of the ethics Board of the faculty of veterinary medicine Mansoura university, Egypt. 36 male Albino rats (weight, 150-200GM was purchased from faculty of pharmacy, Mansoura University, Egypt). They were managment on a 12-h light-dark cycle with available of food and water for ad libitium (Figure 2). Rats were exposed to drowning by keeping them in a wire box in collected freshwater (Egyptian nil river) or saltwater (mediterranean sea). Time from start of drowning till complete death was recorded. Recovered dead rats were kept in fixed supine position on research lab. Temperature (20oC) for 48hrs hours postmortem. Blood samples of each 6 rats for each time point were collected from heart and great vessels at autopsy [15] and suffer postmortem changes in 0, 24 and 48hrs hours. Samples were centrifuged immediately for 20 min at 2000 rpm. Serum samples was stored at -20 deep freezer until measurement (Figure 3).

The 12 male rats were anesthetized with thiopental and natural death was induced [16]. 24 recovered corpse of drowned rats were kept for 0, 24 and 48hrs and their tissues like heart, lung, and brain were separated at different time point after death and fixed at 10% neutral buffered formalin. Fixed tissue were procedures were described previously before in details for eosin and hematoxylin staining [17].

The tissue of brain, heart and lung paraffin sections that were mounted on positively charged glass slides were processed for single immunohistochemistry with an antibody to IL-6 according to method described earlier [18]. The mean area percentage of collagen fiber content between the brain, heart and lung of drowned rats either in fresh water or slat water was quantified for each group. Atomic absorption spectrometry analysis of stomach content of trace mineral in fresh and saltwater drowning (Figure 4). The collected stomach content was collected after recovered rats from water either fresh or salt one. The samples were kept in polyethylene bags till digestion step by acid. Liquid digestion: All samples were digested by acid mixture. the mixture of NitricPerchloric acids were used in the liquid digestion of samples (Sigma-Aldrich, Egypt). Combined acids (10 mL, 65% high purity HNO3 and 3:1 v/v) was added to the beaker containing 2g fresh meat for liquid digestion of samples (Figure 5).

Statistical analysis was carried out using the student’s t-test and one way annova. P<0.05 was considered significant [19] (spss version13). 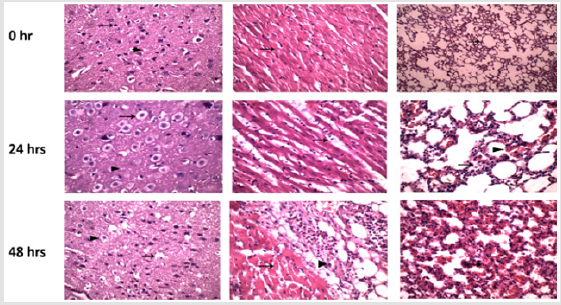 Figure 1: Show pathological features of fresh water drowning at 24 and 48 hrs. of neuron, cardiomyocytes death and rupture of alveoli.

Figure 2: Show pathological feature of salt water drowning in rats, the brain is showing changes represented by death of neurons, and marked vacuolation in the brain parenchyma, heart is showing death of cardiomyocytes and increases in interstitial spaces, lung displays pulmonary atelectasis and over distended alveoli with air with rupture of capillaries and cellular death of interstitial cells at 48 hrs than 24hrs. 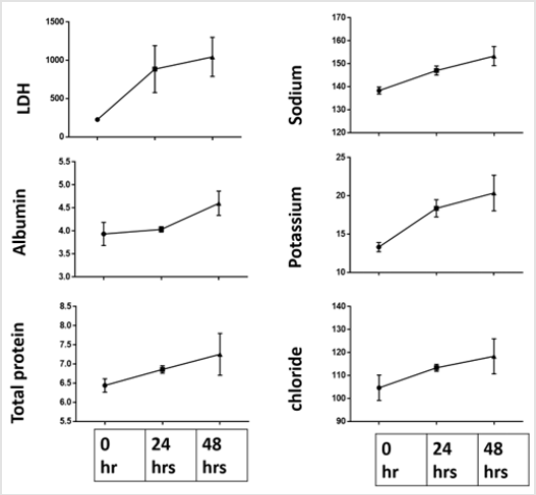 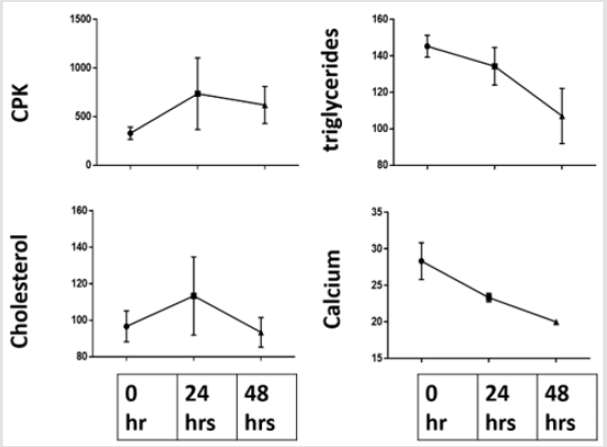 Figure 4: Show that cholesterol and CPK were fluctuated levels in fresh water drowned rats and levels of triglycerides and calcium were time dependent decreased.

Notably, drowning in saltwater retard autolysis and protein degradation in first 24 after rat’s corpse recovered from water then again started with evidence of increase total protein and albumin. While LDH and sodium were increase until 24hrs and then decreased. Moreover, there were time dependent increase of triglycerides, CPK and calcium in postmortem drowned rats in saltwater and decreased the level of cholesterol, potassium and chloride in the water drowned rats (Figures 5 & 6, 7). Collagen deposition and reactive IL-6 in natural induced death and drowned rats in fresh and saltwater drowned. It was notice that collagen deposition and immunostaining reaction of IL-6 considered as good marker for differentiation of tissue of lung and heart between different causes of death as it increased in saltwater >fresh> natural induced death (Figures 8 & 9). Heavy and trace element measurement by atomic absorption spectrometry Stomach content was evident in all rats and in all times in postmortem analysis. Level of cadmium, lead and calcium were significant increase only in salt water drowning when compared with natural death and fresh water drowning. While level of potassium was decreased in both fresh water and saltwater drowning when compared to natural induced brain stem death [19,20] Figure 10. 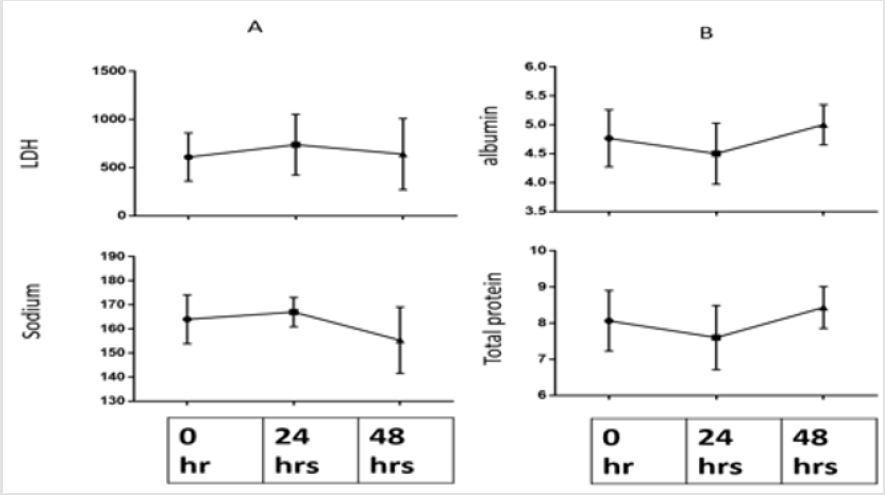 Figure 5: Show fluctuated biochemical up and down in A. and B. with evidence that saltwater delay protein degradation in first 24 hrs. only. 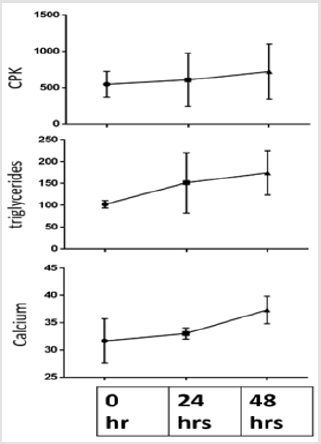 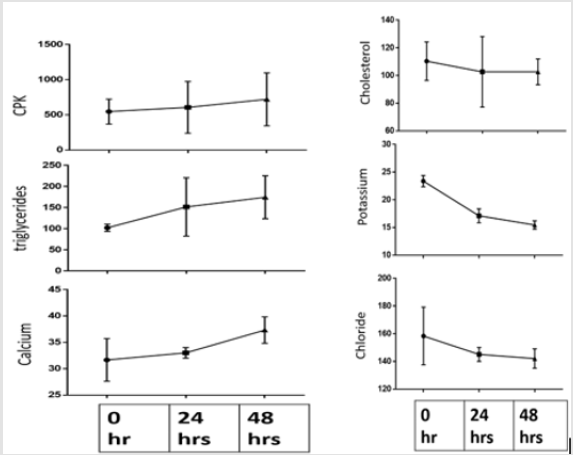 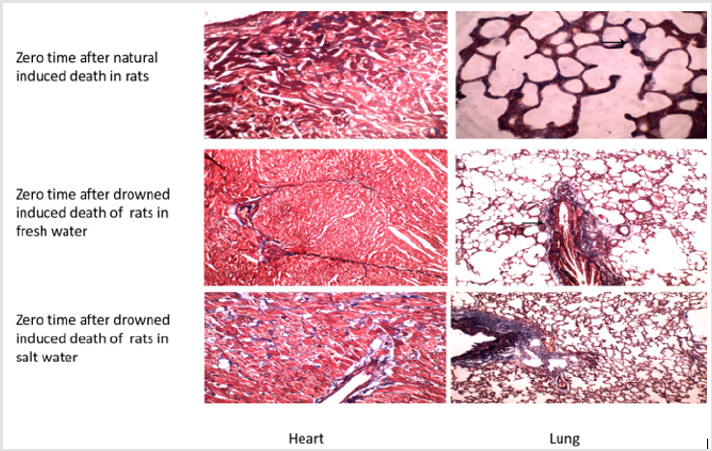 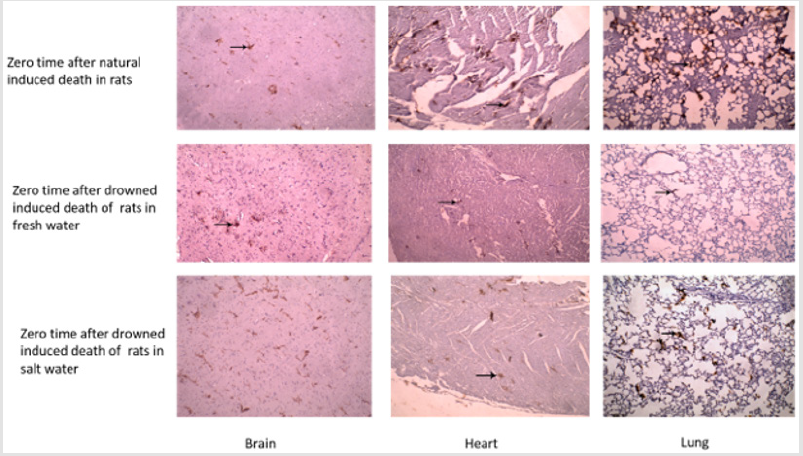 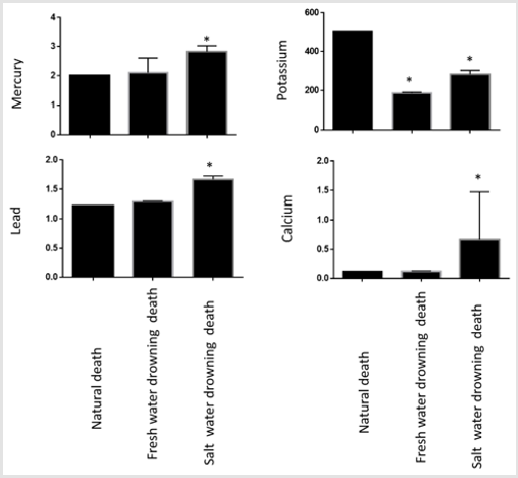 Notably, biochemical, trace mineral, heavy metal of stomach content, histopathology, collagen and IL-6 share a difference in fresh water and more prominent in salt water than those recorded in natural induced experimental rats. There is significant linear correlation between creatine kinase (CPK) and calcium with the time of blood putrefaction [21] similar to what recorded at 72 hrs postmortem. Notably, the increase in the serum calcium level was observed in freshwater drowning [22]. the Postmortem changes started earlier in the heart 3 to 4 hours compared with other organs after death [23]. While collagen deposition at onset of death is prominent factor for diagnosis of death especially in drowning cases in forensic Autopsies [24]. Up with standing with current detection of abundance of IL-6 in tissues of seawater drowned rats than freshwater as seen previously [10,13]. Finally, as biochemical markers and trace mineral different in vitreous humor in seawater and freshwater [25] also could be differ in blood.

Changes of biochemical of postmortem times may dependent on cause of death and notably IL-6 expression could distinguish freshwater and seawater drowning.