The Role of Serotonin in the Development of Experimental Diverticulosis

Diverticulosis was simulated by creating a local depression in the wall of the intestine of rats by creating a vacuum of 0.1 atm at the distal portion of the cecum. Studies of the role of serotonin in the development of experimental diverticulosis was carried out by preliminary administration of serotonin at a dose of 100 mg / kg. It was demonstrated that serotonin enhances the contractile activity in experimental colon diverticulosis during the first 10 days from the beginning of simulation and has koloprotective action.

In the pathogenesis of diverticular disease (DD) and a number of other intestinal diseases, intestinal innervation disorders are of great importance, accompanied by impaired motor function [1]. These phenomena are based on both a weakening of the inhibitory effects of the cerebral cortex on the lower parts, with a significant decrease in the reactivity of the sympathetic division of the autonomic nervous system and a decrease in the level of neurotransmitter catecholamines, and an increase in the blood content of biologically active substances - serotonin (5-hydroxytryptamine, 5-HT) . Serotonin is an important regulator of intestinal secretion and motility [2-4]. More than 95% of serotonin is deposited in the intestine, where 5-HT is synthesized by enterochromaffin (EC) cells. Serotonin-containing cells make up about 70% of the total endocrine cell population.

Enteroendocrine cells, the ratio of which may vary, contain 5-HT and numerous peptides that regulate the motor, secretory and sensory activity of the intestine in physiological concentrations [5,6]. Serotonin is secreted by EC cells of the mucosal lamina in response to mechanical, chemical and other stimuli [2], and the release of 5-HT is the main trigger of peristalsis, secretion and signaling of visceral sensitivity [7].

a) Stimulation of mucosal cells (for example, acidic, mechanical, or stressful stimuli) triggers the release of 5-HT by cells of the mucosal lamina propria;

b) Activation of 5-HT receptors of adjacent nerve fibers;

c) Removal of 5-HT from the interstitial space using a serotonin transporter (SERT) that expresses any epithelial cells; and

The experiments were carried out on 22 Wistar rats weighing 260-300 g in strict accordance with the requirements of the European Convention on the gentle attitude towards experimental animals in conditions of acute experience. Diverticulosis was modeled by creating a local vacuum of 0.1 atm with an area of 1 mm2 at 5-7 points of the distal cecum. The level of electromotive activity (EMG) was used to determine the hypokinetic and hyperkinetic state of the ileum, the distal blind and the ascending part of the large intestine when simulating diverticulosis and on the 10th day of its development using bipolar surface electrodes with a contact surface area of 1.5-2 mm2. Registration was performed using a Nishon-Konden multichannel polygraph. The study of the role of serotonin was performed in a series of experiments on 10 rats by administering serotonin at a dose of 100 μg / kg for 1-4 minutes before creating a model of diverticulosis. The control group consisted of 5 experimental animals.

Morphological study of the cecum was performed on the 10th day of the experiment. The tissue was fixed in a 9% formalin solution, dehydrated in alcohols of increasing concentration. After dehydration, tissue samples were embedded in paraffin, histological sections were prepared. Analysis of changes in the wall of the cecum was performed on sections stained with hematoxylin and eosin and according to Van Gieson. Statistical processing of the data was performed using the Statistica-17 software package. All quantitative data that obey the normal distribution are presented as M ± m. To process the data obtained, the Student criterion (t) was applied, followed by determining the level of significance of differences (p) and the criterion χ2. Differences between mean values were considered significant at p <0.05. 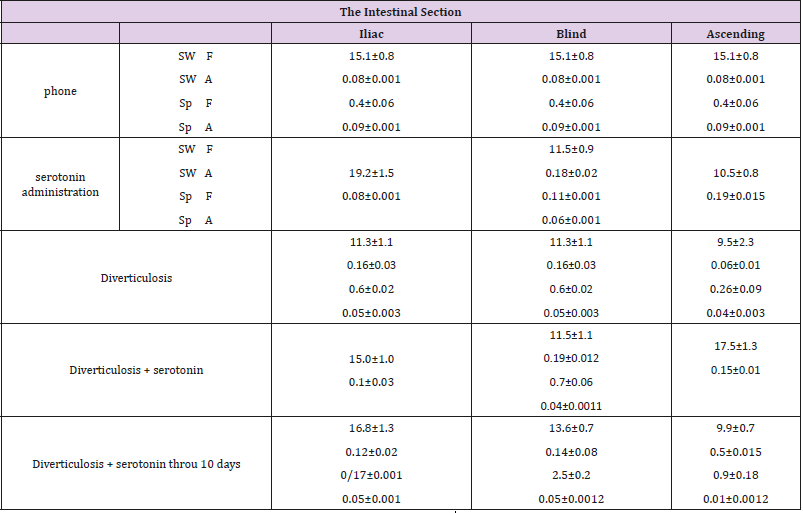 On the 10th day after the simulation of diverticulosis by serotonin administrated, the ascending part of the colon is characterized by a decrease in the frequency of slow-wave activity to 9.9 ± 0.7 per minute (43.4%, p <0.05) with a significant increase in amplitude - 2 , 3 times and recovery of spike activity, the frequency of spikes of which exceeds the background level by 2.25 times, but with a decrease in the amplitude of spike activity by 2 times. Thus, 10 days after the simulation of diverticulosis in the presence of serotonin, there is an increase in motor function, especially of the ileum, with a change in the excitability and contractile activity of the ascending part of the colon. A morphological study of the wall of the cecum on the 10th day of development of diverticulosis revealed signs of development of immune reactions: interepithelial lymphocytes were found in the surface epithelium, isolated macrophages and individual plasma cells were found in the subepithelial layer. There is abundant lymphoid cell infiltration of the mucous layer. The number of goblet cells is dramatically increased.

The introduction of serotonin in the simulation of diverticulosis, according to a histological study of drugs of the cecum, is accompanied by a violation of the integrity of the epithelial layer, in which individual MELs are noted. Hyperplasia of colonocytes is noted in some villi (Figure 1a). Infiltration of the mucous membrane by lymphocytes and macrophages and a small number of plasma cells is observed, which reflects a slight decrease in the voltage of the immunological process. A relative decrease in the number of goblet cells at different stages of the secretory process was found (Figure 1b). There is hyperplasia of Pannet cells. Increased proliferative activity of crypt stem cells leads to the formation of clusters of poorly differentiated epithelial cells. Introduction of serotonin, apparently, promotes preferential differentiation of stem cells of crypts into colonocytes, and not into goblet cells. 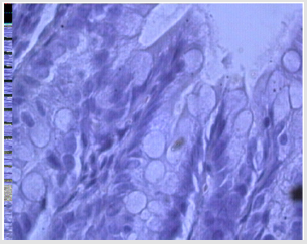 Figure 1a: Violation of the integrity of the epithelial layer and histiocytes, infiltration with lymphocytes and macrophages and individual plasma cells, reflecting the voltage of the immunological process; relative decrease in the number of goblet cells at different stages of the secretory process in case of diverticulosis against serotonin. 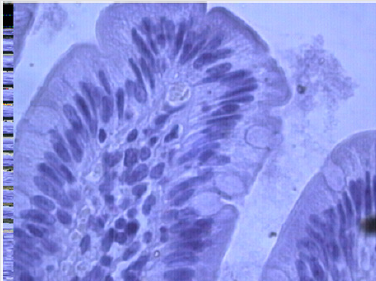 The development of coarse connective fibers along the vessels in the villi and on the border of the mucous and submucosal layer (Figure 2) is revealed up to the development of tissue hyalinosis along the muscularis mucosa. Separate connective tissue fibers penetrate between muscle fibers and divide them into groups. There is hyperplasia of the submucosal and intermuscular nerve plexus (Figure 3), vacuolar dystrophy of individual neurons, which indicates the imperfection of the nervous regulation of mucus secretion and motor function of the intestine with diverticulosis. So, when simulating diverticulosis, the motor function of all the intestinal sections studied is increased: the ileum and the cecum, and the ascending part of the large intestine. The introduction of serotonin increases, above all, the slow-wave activity of all parts of the intestine, enhancing the propulsion motility. Diverticulosis is characterized by an increase in the slow-wave activity of smooth muscles, primarily of the cecum (zone of formation of diverticula). Simulation of diverticulosis on the background of prior administration of serotonin leads to a significant increase in slow-wave activity above and below the zone of simulation of diverticulosis. On the 10th day after the simulation of diverticulosis against the introduction of serotonin, the motor function of the ileum and the cecum continues to increase with a decrease in the motor function of the ascending part of the large intestine. 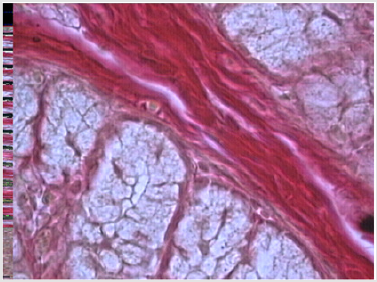 Figure 2: Coarse connective tissue fibers at the border of the mucous and submucosal layer with diverticulosis against serotonin. 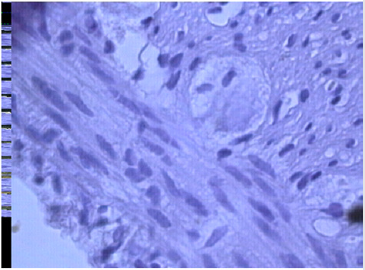 Figure 3: Ganglia of the intermuscular nerve plexus: neurons with signs of vacuolar degeneration, destruction of individual cells during diverticulosis against serotonin.

Preliminary administration of serotonin reduces the manifestations of stress immunological process: reduces the number of MEL, lymphoid-plasmacytic mucosal infiltration; there is an increase in the development of connective tissue up to hyalinosis. These changes indicate that serotonin prevents the development of immune inflammation in case of diverticulosis and transformation of diverticulosis into diverticulitis. It should be noted that the prior introduction of serotonin on the principle of feedback prevents the release of endogenous serotonin, which is characteristic of alteration processes. It is because of the competitive relationship between exogenous and endogenous serotonin as a whole that the damaging effect of the pathogenic factor on the tissue of the cecum decreases (in the case of diverticulosis - negative pressure). It can also be assumed that the decrease in the damaging effects of exogenous serotonin is associated with desensitization of serotonin receptors of the colon under the influence of endogenous serotonin (serotonin nerve endings, platelets, EC cells, mast cells) and exogenous serotonin. Perhaps the role played by the ratio of intracellular and extracellular serotonin [11], which may affect the development of connective tissue. The decrease in the electromotive activity of the colon is an integral indicator of the neurodystrophic process, excessive collagen formation and proliferation of the colon epithelium with the formation of multicellular clusters of undifferentiated epithelial cells.

The Role of Serotonin in the Development of Experimental Diverticulosis

Diverticulosis was simulated by creating a local depression in the wall of the intestine of rats by creating a vacuum of 0.1 atm at the distal portion of the cecum. Studies of the role of serotonin in the development of experimental diverticulosis was carried out by preliminary administration of serotonin at a dose of 100 mg / kg. It was demonstrated that serotonin enhances the contractile activity in experimental colon diverticulosis during the first 10 days from the beginning of simulation and has koloprotective action.