Households in 10 Chinese cities were asked to rank six food-safety indicators (venue, appearance, brand, certification, expiration date, and price) in importance for five food groups including meat, milk, vegetables, fruit, and juice. The results suggest that different food-safety factors are important for different commodities. Consistent patterns are found in terms of which factor had the first and second highest probabilities of being chosen as the most important food-safety indicator within food categories. Venue and expiration date are the most important factors for meat, expiration date and brand for milk and juice, and price and venue for vegetables and fruits. Certification was not ranked as the number one or number two indicator of food safety for any of the five goods suggesting that either the household consumers do not trust the certifications or are not aware of the meanings of the certification labels.

Food safety incidents in China have ignited demand for safer food and increased regulation of food products by the Chinese government [1,2]. In Chinese news are reports of sales of pork adulterated with the drug clenbuterol; pork sold as beef after being soaked in borax; rice contaminated with cadmium; arsenic-laced soy sauce; popcorn and mushrooms treated with fluorescent bleach; bean sprouts tainted with an animal antibiotic; and wine diluted with sugared water and chemicals. Even eggs have turned out not to be eggs at all but man-made concoctions of chemicals, gelatin and paraffin [3]. In the first half of 2012, China’s State Administration for Industry and Commerce detected over 15,000 cases of inferior foods and closed over 5,700 unlicensed food businesses [4]. In response to these incidents as well as others, the Chinese government revised the 2009 food safety law to impose stricter controls and supervision of food production and management [5]. However, while some progress had been made, the head of China’s Food and Drug Administration reported there were over 500,000 food safety violations during the first 9 months of 2016 [6].

Given the prevalence of food safety incidents and violations as well as consumer’s increasing concern over the safety of their food, what do consumers perceive as indicators of safe foods? Do consumers perceive that food purchased at large supermarkets is safer than that from traditional wet markets? Do they trust their ability to evaluate the appearance of products? Does government certification of food safety matter? Do certain brands elicit trust in the safety of their products? Does an expiration date on the product matter?

In this paper, how consumers perceive indicators of safety for meat, milk, fruit, vegetables, and juice products and how the importance of these indicators vary with economic and demographic variables are analyzed. The analysis uses a unique data set developed from a series of household surveys conducted in 10 cities in China. As part of the surveys, respondents were asked to rank in order of importance their perceived top indicators of food safety among purchase venue, certification, brand, price, appearance, and expiration date for meat, milk, fruit, vegetable and juice.

The results suggest that the top indicator of food safety as perceived by the Chinese consumers varies by food product. Venue is the top indicator of safety for meat, date milk. Price for vegetables and fruit, and both brand and date for juices. The results also suggest that economic growth, as well as demographic and education trends, will likely increase the extent to which consumers use these indicators to determine the safety of these five foods in the future.

The general production process for safe food as described in Notermans et al. [7] suggests that the production of acceptable, safe food products is the result of Good Manufacturing Processes (GMP), HACCP and regulations as well as consumer education. If food products are produced using good practices and following HACCP and regulatory guidelines, then consumers could be confident that these food products are safe. However, China has experienced many incidents where apparently some portion of the GMP, HACCP, or regulatory processes were not effective [3].

Many studies have examined consumer’s willingness to pay for higher quality or safer foods [9-12]. In general, these studies find that consumers are willing to pay a premium for higher quality or safer food. Bai et al. [13] assess food safety accidents in China in 2003 and 2004, and they find that most of these accidents could be attributed to either contaminated raw materials or insufficient sanitation control during processing. They also examine government mandated compulsory food safety admittance systems and voluntary food safety assurance systems such as Green Food and organic foods. They find that the compulsory system is inefficient and perhaps ineffective particularly for small food processors. The use of voluntary food safety assurance systems is found to be rapidly increasing and to be used by food companies as a means to compete in the marketplace in terms of the safety of their products. However, it is not clear how consumers perceive these systems. Zhang et al. [14] find that consumers evaluate extrinsic factors to assess the safety of food products. They find that brand and purchase venue are ranked as the two most important safety indicators for fluid milk purchases.

The data in the present study were collected by surveying 2,027 urban households in 10 cities from 2009 to 2012. These cities and number of Households (HH) surveyed for this analysis are Nanjing (246HH) in Jiangsu province, Chengdu (208HH) in Sichuan province, Xi’an (215HH) in Shaanxi province, Shenyang (207HH) in Liaoning province, Xiamen (149HH) in Fujian province, Taiyuan (202HH) in Shanxi province, Harbin (212HH) in Heilongjiang province, Taiyuan (202HH) in Shanxi province, Nanning (190HH) in Guangxi province, Taizhou (197HH) in Zhejiang province, and Lanzhou (201HH) in Gansu province. For the sake of regional comparison, the surveys were conducted between July and September. These cities were chosen to be geographically dispersed and representative of the upper tier cities in China (Figure 1). 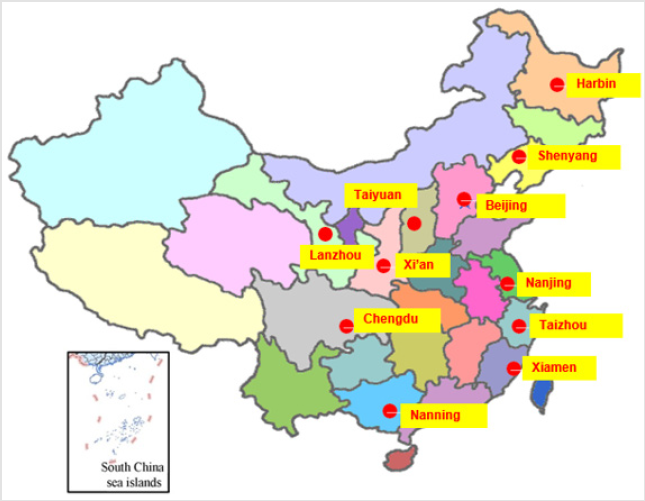 Our survey participants are a stratified random sample of the households participating in the Urban Household Income and Expenditure (UHIE) survey conducted by the National Bureau of Statistics of China (NBSC). The UHIE is a national survey, which provides the primary official information on urban consumers’ income and expenditures. The data from the UHIE survey have been widely used by scholars for food consumption and expenditure research but do not include any information of consumer attitudes towards or perceptions of food safety.

Questions pertaining to food safety were asked with inhouse and face-to-face interviews with the person most familiar with the food shopping and food preparation in each household. Respondents were asked to rank among six indicators (i.e., purchase venue, appearance, brand, certification, expiration date and price) which of these they perceived to be most important, next most important, and third most important (1,2,3) as indicating food safety for meat, milk, vegetables, fruits, and juice. Additionally, detailed information on demographics and socioeconomics of the household and its members were also collected during the survey which of these characteristics were associated with the consumers’ ranking behavior. 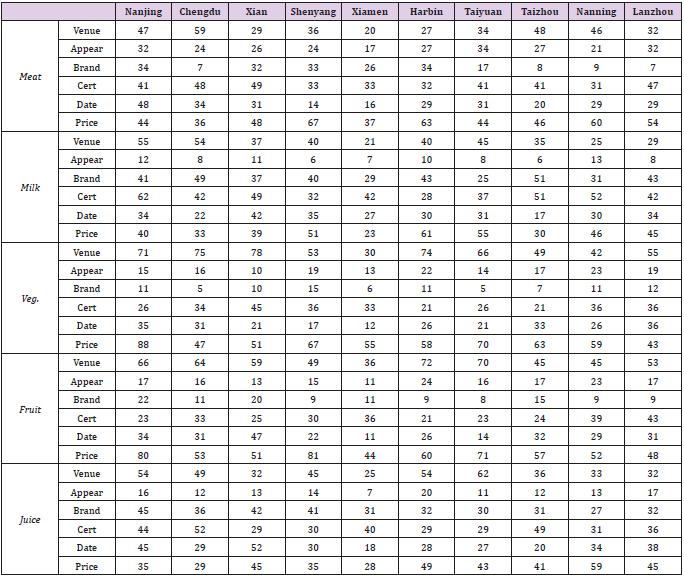 Table 1: Number ranking each factor as most important by survey participants.

Following Zhang et al. [14], a Rank Ordered Logit Model (ROLM) is used, which is a generalization of the conditional logit model for ranked data [15]. The ROLM model can also be used when individuals do not rank some of the least-preferred items [14,15]. As shown in Zhang et al. [14], the ROLM can be derived from an underlying random utility model [15,16] where each respondent, i, ranks the most important, next most important and the third most important perceived indicator in determining food safety. Let 𝑈𝑖𝑗, 𝑗 = 1, … , 𝐽 be the unobserved utility that respondent i derives from the jth factor where i is assumed to rank factor j higher than factor k whenever Uij>Uik. Each Uij is composed of the sum of two parts, the systematic component part, 𝜇𝑖𝑗, and a random component, εij. The 𝜇𝑖𝑗are numerical quantities that indicate the degree that respondent i prefers item j over other items [16]. When the choice is between item j and item k, the odds of choosing j over k is exp {μij - μik}.

where αj is interpreted as the differences in log odds of ranking factor j over the reference factor, and βjl can be interpreted as the effect of a one-unit change in the lth explanatory variable on the log odds. The 𝑋𝑖𝑙( 𝑙 = 1,.. 𝐿) are the individual’s lth characteristics that vary across respondents but are fixed across factors and include presence of children, adolescents, or seniors as well as income and education level (Table 2). Note that one factor is dropped due to identification issues so that all estimates for αj and βjl are relative to the reference factor. Predicted probabilities for each alternative are calculated using the StataCorp [17] routine aspr value.

For identification, the indicator price is omitted from the ROLM, and the model is estimated with maximum likelihood. Accordingly, all coefficient estimates are relative to choosing price as the number one indicator of food safety (Table 3). For example, the coefficients on venue for meat, vegetables, fruit, and juice are significant with two being positive and two being negative. These coefficients indicate that, for meat and juice, venue is more likely to be chosen than price as the most important perceived indicator of food safety while price is more likely to be chosen than venue is for vegetables and fruit.

City effects also have a significant effect on choice of a factor over price in many instances as indicated by the interactive terms including cities1. Generally, in comparison to Nanjing, the interaction terms for cities are significantly negative for choosing venue and brand over price for meat, milk, and juice; appearance over price for meat; and expiration date over price for meat, milk, vegetables, fruit, and juice. The ROLM with socioeconomic and cityeffect variables has a large number of interactive terms and that makes it difficult to access the quantitative importance of the six food-safety indicators from a quick examination of the coefficients reported in Table 3 [15]. To access the importance of these factors, probability estimates of each factor being chosen first are calculated and reported in Table 4 with these probabilities being calculated taking into account the effects of the significant interactive terms. 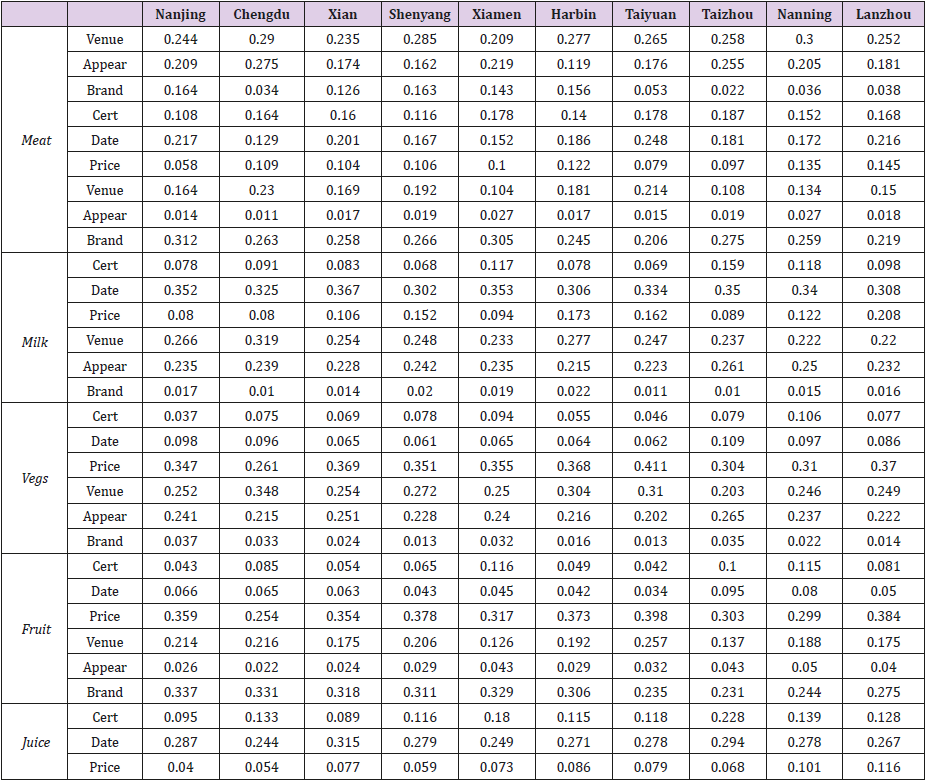 Households in 10 Chinese cities were asked to rank six food-safety indicators (venue, appearance, brand, certification, expiration date, and price) in importance for five food groups including meat, milk, vegetables, fruit, and juice. The results suggest that different food-safety factors are important for different commodities. Consistent patterns are found in terms of which factor had the first and second highest probabilities of being chosen as the most important food-safety indicator within food categories. Venue and expiration date are the most important factors for meat, expiration date and brand for milk and juice, and price and venue for vegetables and fruits. Certification was not ranked as the number one or number two indicator of food safety for any of the five goods suggesting that either the household consumers do not trust the certifications or are not aware of the meanings of the certification labels.