Overall Management of Individualized Treatment for a Patient with Advanced NSCLC

Objective: This article analyzes the overall management of a patient with advanced non-small cell lung cancer who has been managed for a total of 4 years and provides a reference for clinical case management.

Results: Through targeted therapy, immunotherapy, chemotherapy and radiotherapy, the patient’s life span was extended to 4 years.

Conclusion: For advanced lung cancer patients, a comprehensive, Individualized and precise diagnosis and treatment can significantly improve the prognosis of NSCLC.

The patient was a 64 years old woman, who had no smoking history and no family history of tumor. The blood CEA 304ng/ ml was found in the January 2014 physical examination. PETCT showed right upper lung occupying and multiple lymph node metastases in the right supraclavicular, mediastinal and abdominal pelvis, with multiple small nodules in the upper and the lower lobe of the right lung. Right lung tumor biopsy found low differentiated adenocarcinoma. Molecular Profile was EGFR L858R mutation. According to the imaging and pathological data of this patient, the right lung adenocarcinoma was diagnosed as stage IV, with double lung and abdominal pelvic metastasis.

In January 12, 2014, this patient began oral gefitinib as firstline treatment. The tumor gradually reduced, and the blood CEA decreased from 300 to 48.94ng/ml. In August 21, 2014, the CT scan showed that the nodules of the upper lobe of the right lung increased approximately 20%, suggesting progression of the disease. Referring to Matthew K. Wong retrospective analysis of progression of gefitinib first-line treatment, 18 patients received erlotinib as second-line treatment and 12 patients’ disease were under control. So erlotinib second-line treatment was initiated in August 23, 2014. After 2 months (2014-10-23), the chest CT showed that mass continued to increase, which implicated the deterioration of the condition, and the blood CEA value was 27.87ng/ml. After the first generation of TKI drug resistance, we performed molecular testing and no gene mutation was found in October 2014. Blind selection began to take AZD9291 (osimertinib/Tagrisso) as threeline treatment, and the tumor was shrinked (Figures 1 & 2). 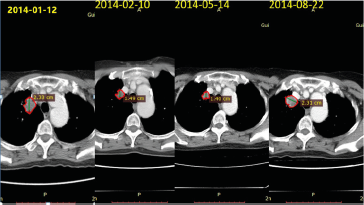 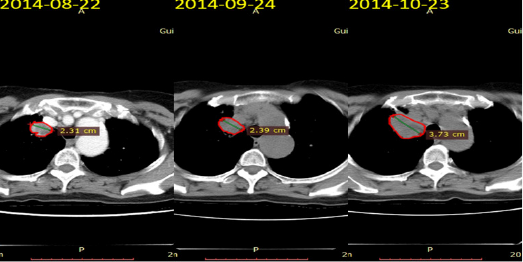 Re-examination of CT in March 30, 2015 showed that lung disease progress and lumbar L1 bone metastasis. So, he received local radiotherapy for lumbar L1 bone metastases. As replacement of pemetrexed+carboplatin chemotherapy as four-line treatment, taxol+carboplatin regimen was performed. The ALTER 0303 study found that PFS and OS were 5.5 months and 9.63 months in the group of NSCLC patients who had previously failed first line and second-line treatment. The PFS and OS in the placebo control group were only 1.4 months and 6.3 months. In May 13, 2015, the patient had the five-line treatment with erlotinib. And after two weeks of treatment, the pain of the whole body was aggravated, and she was unable to take care of herself. The PS score dropped to 3, suggesting that the erlotinib were ineffective. In May 30, 2015, INC280 (c-Met inhibitor)+erlotinib were used as six-line treatment. And 1 day after, the pain significantly relieved, he can have self-care. The best effect was partial response(PR), and the remission period sustained 18 months. In November 23, 2016, the CT showed that lung lesions progressed again, and some new iliac bone metastases appeared (Figure 3). 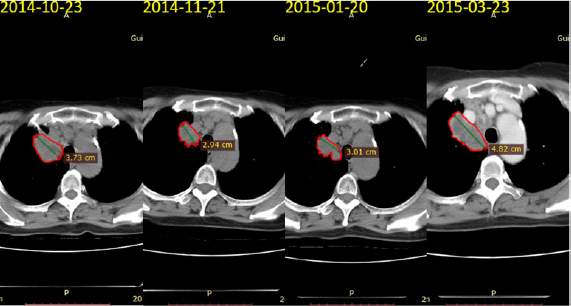 a) Rapid progression. This type of patient recommends having chemotherapy and recommends a prebiopsy.

b) Slow progression. This type of patient recommends TKI treatment, combined with chemotherapy.

Peripheral blood gene detection showed that EGFR 21 exon L858R mutation +c-MET amplification So she was given INC280+AZD9291 treatment. INC280 is an efficient oral c-MET inhibitor, which can be combined with TKI for EGFR mutation and MET positive non-small cell lung cancer. In 2014 ASCO Professor Wu Yilong confirmed that INC280 combined with gefitinib in the treatment of EGFR mutation, MET positive non-small cell lung cancer was effective and well tolerated [3-4]. Tumor immunotherapy aims at activating the body’s immune system and killing cancer cells and tumor tissues by activating T cells. Immunotherapy, as a new type of anti-cancer therapy, has received extensive attention, but in the process of use, it also appears such as immune related rash, immune related pneumonia, hepatitis and thyroid, gastrointestinal tract and other adverse reactions [5], clinicians should pay attention to the adverse reaction of patients and should take appropriate measures in time (Figure 5).

Based on the findings of Keynote-010, FDA approved pembrolizumab monoclonal antibody in October 2015 for advanced NSCLC patients with PD-L1 positive expression. In the KEYNOTE-024 (NCT02142738) study, the first-line application of PD-1 inhibitor Pembrolizumab provides a better progression free survival(PFS) for advanced NSCLC patients with PD-L1 expression of more than 50% (PD-L1 tumor ratio TPS > 50%) and no EGFR or ALK sensitive mutations [6]. In this case, the patients appeared blepharoedema with myasthenia of eyelid, myasthenia of the whole body and joint pain during the treatment of pembrolizumab mAb, the liver function III was abnormal, the treatment of methylprednisolone + propyl ball, and the slow reduction of methylprednisolone, after 8 weeks, the patient’s irAEs was close to be cured, and the curative effect was partly remission. About 10%-15% lung cancer patients have brain metastases at initial diagnosis. Brain metastases occur in the whole course of the disease, and brain metastases are more likely to occur in patients with EGFR gene sensitive mutations.

Overall Management of Individualized Treatment for a Patient with Advanced NSCLC

Objective: This article analyzes the overall management of a patient with advanced non-small cell lung cancer who has been managed for a total of 4 years and provides a reference for clinical case management.

Results: Through targeted therapy, immunotherapy, chemotherapy and radiotherapy, the patient’s life span was extended to 4 years.

Conclusion: For advanced lung cancer patients, a comprehensive, Individualized and precise diagnosis and treatment can significantly improve the prognosis of NSCLC.