Objective: This retrospective study aimed to investigate the selective vulnerability and the demyelinating pattern of MMN, LSS and CIDP with CB (CIDP-CB) nerves.

Results: CB was more likely to occur around elbow (p<0.01) while less likely to be found between wrist and elbow in CIDP-CB (p<0.05). Tibial nerve CB was also frequently observed in MMN (p<0.05). CIDP-CB had a prolonged DML in all nerves and its slow motor nerve velocity (MCV) of upper limb was remarkable when CB nerves were excluded.

Conclusion: We reported the difference of selective segmental vulnerability of ulnar and tibial nerves in LSS, MMN and CIDP-CB. The different CB distribution could help in differentiation.

The pathological features of peripheral nerve myelin lesion are known as diffuse and focal demyelination. As a hallmark of peripheral nerve focal demyelination, conduction block (CB) has been found in a series of both acquired and hereditary demyelinating neuropathies [1-4]. Multifocal motor neuropathy (MMN) and Lewis-Sumner syndrome (LSS) are the most representative chronic acquired focal neuropathies, while many of the classic chronic inflammatory demyelinating polyradiculoneuropathy (CIDP) also presents with CB [5]. Distinct from common peripheral neuropathies, the motor impairments in these focal neuropathies are clinically uneven, i.e., non-length dependent and asymmetric [6,7]. Their limb onset selectivity is well-known [8], however, not efficient in reciprocal differentiation. Different nerve involvement among demyelinating polyneuropathies was proposed by the morphological study, which suggested the selective vulnerability of nerves [9]. The selectivity was observed in other neuropathies [10,11], but hasn’t been fully studied in focal demyelination by electrophysiology methods. Thus, in this study, by using of a bunch of well-established electrophysiological indicators, e.g., distal motor latency (DML), terminal latency index (TLI), F-wave latency and nerve conduction velocity (NCV) as well as CB, we aimed to investigate the selective vulnerability and the demyelinating pattern of nerves and segments in patients with MMN, LSS and CIDP with CB (CIDP-CB).

This was a retrospective cross-section study performed under the principles of the Declaration of Helsinki and was approved by the Institutional Review Board of Renji Hospital Shanghai Jiaotong University School of Medicine. Written informed consent was obtained from the subjects for publication of this paper. Fifteen LSS subjects, 24 MMN subjects and 17 CIDP-CB subjects admitted at Renji Hospital Shanghai Jiaotong University School of Medicine from 2013 to 2017 were included in the study. A total of 107 nerves of LSS subjects, 176 nerves of MMN subjects, and 110 nerves of CIDP-CB subjects were analyzed. The LSS and CIDP diagnoses were based on the 2010 European Federation of Neurological Societies (EFNS)/Peripheral Nerve Society (PNS) guideline on CIDP [12], and the MMN diagnose was based on the 2010 EFNS/PNS guideline on MMN [13]. The exclusion criteria were peripheral neuropathy family history; alcohol abuse; toxic and neurotoxic exposure; tumor; metabolic disorders including pathoglycemia (diabetic mellitus and impaired glucose tolerance); paraproteinemia (monoclonal gamma-globin related polyneuropathy).

General information of gender, age and height were recorded. Detailed clinical history was investigated to collect disease duration and onset and determine neurological manifestations of weakness, numbness and atrophy. Meticulous physical examinations were performed to determine tendon reflex as well as other positive neurological signs. Blood routine test, liver and kidney function, blood electrolytes, thyroid function, vitamin B12, folic acid and blood glucose were checked to meet the inclusion and exclusion criteria. Gangliosidosis antibodies examination were semi-quantitative by blot and was fulfilled by KingMed Diagnostics (Guangdong, China). A panel of various kinds of anti-Gangliosidosis (GM1, GM2, GM3, GD1a, GD1b, GQ1b, GD1b) was used and positive result was determined by visible band in GM1 area. Blood immunofixation electrophoresis was tested for subjects to meet the exclusion terms. Lumbar puncture was performed under the informed consent of subjects and cerebrospinal fluid (CSF) was quantitatively analyzed to determine albumin protein concentration.

Take-off latency and distance were recorded and NCV was thus calculated. Distal distance (dD), DML, and NCV was used to calculate TLI by the following formula: TLI=(dD/DML)/NCV. F-wave was performed during a bout of stimulation recorded on distal muscle and the first F-wave latency (F) was recorded. DML, proximal motor latency (PML) which is the latency recorded from the second stimulation site from distal, and F were used to calculate modified F-wave ratio (MFR) by the formula:

± standard deviation (SD), and skewed distribution data were described as median (25% percentile – 75% percentile). Particularly, data of the same type were kept the same description in the tables for comparability. Pearson and Fisher chi-square tests were used to analyze the proportion and composition of different groups. Intragroup composition was analyzed by binomial exact test. One-way analysis of variance (ANOVA) and group t-test were used for data with normal distribution and standard homogeneity of variance, otherwise Kruskal Wallis test and Wilcoxon Ranksum test were chosen instead. All statistics were performed by Stata 15.1 (StataCorp, TX, USA) and p<0.05 indicated significant differences.

Gender, age and height were commensurate among different groups (p>0.05). Intragroup gender composition was significant in LSS group (p=0.035) and in MMN group (p=0.007), but not significant in CIDP-CB group (p=0.332). MMN group showed a longer disease duration compared to other groups (p<0.05). Pure upper limb onset and sensory involvement were less probable in CIDP-CB group compared to MMN group (p<0.05). There was no significant difference found in other clinical symptoms or signs among groups (p>0.05). CSF albumin protein showed a gradient elevation from MMN to LSS to CIDP-CB (p<0.001). Anti-GM1 was most likely to be detected in MMN group (p<0.001). General and clinical comparisons are shown in Table 1. 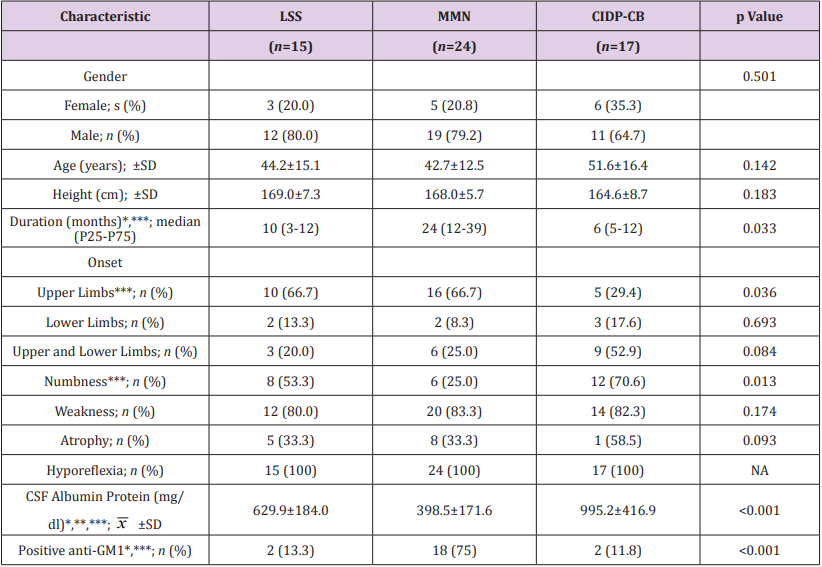 CB And TD Distribution of Nerves

DML was significantly prolonged in CIDP-CB in all nerves (p<0.05), while only ulnar nerve TLI prolonging was observed in LSS (p<0.05). No F-wave latency or MFR difference was found in any nerve. Ulnar nerve NCV differences were found among groups (p<0.05). When nerves with CB were excluded, decrease of upper limb nerve NCV was statically significant (p<0.05). Lower limb CMAP was lower in CIDP-CB (p=0.01). Electrophysiological findings of the indicators are shown in Table 3. 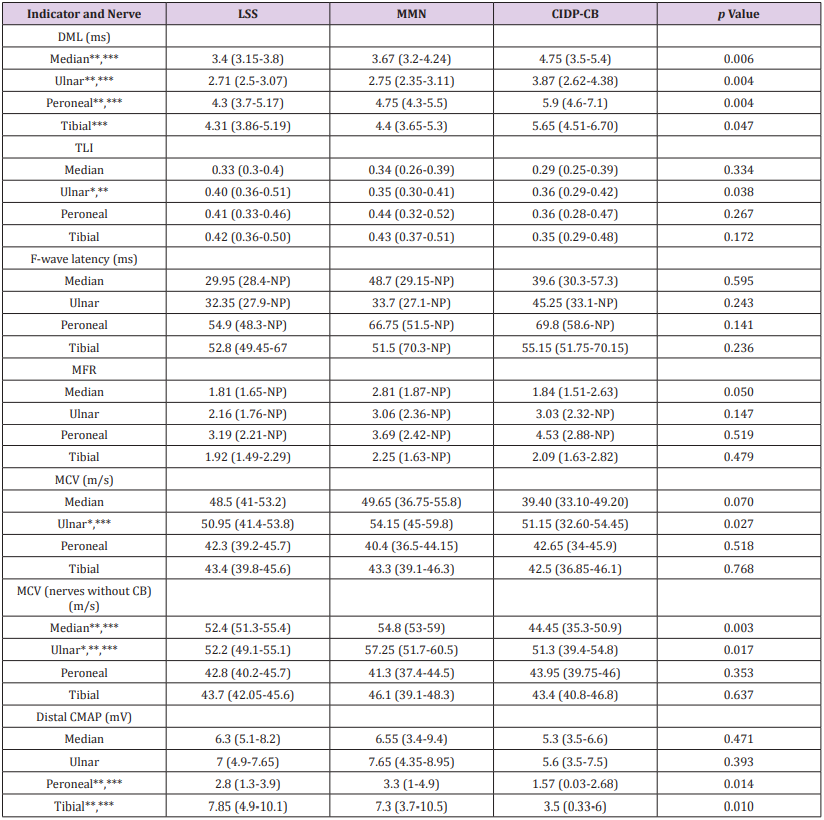 MMN and LSS were characterized by male predominant, upper limb onset and different sensory involvement [14-17]. In this study we also found a male predominant composition in the MMN group and LSS group and it was different in the CIDP-CB group. High upper limb onset proportion and rare sensory involvement in MMN were also proved and could help in differentiating CIDP-CB. In addition, we found MMN presented slowly progressive long duration, low CSF protein and frequent positive anti-GM1, while LSS and CIDP presented progressive duration, moderate-high CSF protein and rare positive anti-GM1. Clinical findings were confirmatory and consistent with previous study [18,19]. Using electrophysiological indicators, we presented a horizontal comparison of LSS, MMN and CIDP-CB nerves. Selective vulnerability of nerve is particularly interesting and controversial in focal neuropathy. Ulnar nerve has been suggested useful in diagnosing acute demyelinating neuropathy [20], and tibial nerve was hypothesized to be especially involved in MMN [21], while other study found no difference in CB distribution [22]. In this study, noting that wrist to elbow segment of ulnar nerve conduction was least likely to be blocked in CIDPCB compared to LSS, while the CB likelihood of segment around ulnar was vice versa in CIDP-CB compared to MMN. Another CB distribution characteristic we found was the frequent tibial nerve CB in MMN. Although upper limb is more frequently affected in MMN, superimposing of tibial nerve focal demyelination implies inclination of MMN diagnose. These findings suggest that ulnar and tibial CB may be critical in differentiation, and to our knowledge hasn’t been reported in chronic focal demyelinating diseases.

The mechanism of nerve selectivity of chronic focal demyelinating diseases hasn’t been fully investigated. Recently, a common etiology discovered in demyelinating diseases with CB was the detection of autoantibodies, e.g., anti-neurofascin 140/186, anti-neurofascin 155 [23,24]. As a target, the neurofascin expression in node and paranode sites determines the impairment pattern of conduction failure and is associated with CB [25]. A reasonably hypothesis is that the uneven distribution of nerve expression of neurofascin may contribute to the nerve selectivity.

Distal vulnerability was suggested in typical CIDP previously [26,27], while, CIDP-CB, as a subtype, has rarely been analyzed and compared solely. Although prolonged DML in all CIDP-CB nerves was in accordance with the distal predominant pattern, the similar values of TLI, a comparison of distal and middle segments [28], of most nerves among groups implied that the distal impairments might commensurate with middle segment when the existence of CB was taken into consideration. The CB also masked the different diffuse demyelinating of median nerve as only ulnar nerve MCV was lower in CIDP-CB. When the nerves with CB were excluded, upper limb MCV decrease in CIDP-CB emerged. In the conduction study, we proved that CIDP-CB showed many common features with typical CIDP comparing to MMN and LSS and this highlighted its diffused demyelination feature in median and ulnar nerves.

We reported the difference of selective segmental vulnerability of ulnar and tibial nerves in LSS, MMN and CIDP-CB, and proved more diffuse demyelinating features in CIDP-CB which distinguished it from LSS and MMN. The different nerve demyelination distribution and pattern could help in differentiation. This study was limited by insufficient proximal and distal conduction data and small sample. A prospective cohort and immunological mechanism study are anticipated.

Objective: This retrospective study aimed to investigate the selective vulnerability and the demyelinating pattern of MMN, LSS and CIDP with CB (CIDP-CB) nerves.

Results: CB was more likely to occur around elbow (p<0.01) while less likely to be found between wrist and elbow in CIDP-CB (p<0.05). Tibial nerve CB was also frequently observed in MMN (p<0.05). CIDP-CB had a prolonged DML in all nerves and its slow motor nerve velocity (MCV) of upper limb was remarkable when CB nerves were excluded.

Conclusion: We reported the difference of selective segmental vulnerability of ulnar and tibial nerves in LSS, MMN and CIDP-CB. The different CB distribution could help in differentiation.