The paper deals with Lilium candidum L., a well-known ancient plant in folk medicine for the treatment of burns, ulcers, inflammations and wound healing. The petals and bulbs of this plant contain many bioactive compounds. Many of them could also find their place in modern medicine.

Lily (Lilium) is a genus of herbaceous flowering plants, consists of approximately 100 species, growing from bulbs. Most species are native to the temperate northern hemisphere. Lilies are tall perennials ranging in height from 60-180 cm. Their flowers are large, often fragrant, and come in a wide range of colors. This plant are important in culture and literature in much of the Word Ziolkowski [1]. During the last 50 years, lily has become worldwide one of the most important flower bulbs and cut flowers. Lilium candidum, commonly known as Madonna lily is a symbol of purity and Inocence (Figure 1). This species of lily grows freely in Asia Minor and the Mediterranean, but in almost all countries of the world it is cultivated artificially for its modesty and beautiful flower. The lanceolate leaves grow from the ground rosette. The stem has straight, densely overgrown leaves and grows up to 70-150 cm in height. The flowers are up to 10 centimeters in size, bright white and smell great. Up to 15 flowers are arranged on one stem, arranged in grapes. Blooms in June and July. The fruits are capsules. 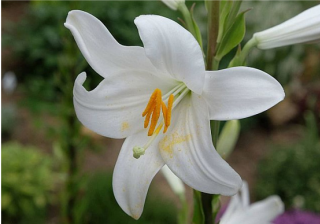 The Lilium candidum L. is also an ancient plant, which is used as an important edible plant and important biomedicine in China to alleviate the symptoms of various human inflammatory diseases Jin et al. [2] and they are cultivated as an ornamental plant throughout the world. This plant helped from time immemorial in the treatment of inflamed and suppurative wounds, ulcers, skin inflammations, burns and various injuries Pieroni [3]. It is also used for muscle pain and gynecological problems. After surgery, it speeds up wound healing. Externally used is an alcohol or oil extract or crushed onions, internally onions cooked in water or milk Rigat et al. [4].

Mechanisms of Lilium anti-inflammatory activity and their bioactive components remain little known, but the therapeutic effects of lilies are confirmed by modern medicine, which has shown its healing, anti-inflammatory, analgesic, antioxidant, and other effects Vachalkova et al. [5-7]. Many biologically active substances were isolated from an ethanolic extract of flowers and onions of L. candidum. These are mainly flavonoids (quercetin, isorhamnetin, kaempferol) Tappi et al. [8], but numerous other bioactive substances have been found in the plant: carotenoids Tappi et al. [9] steroidal alkaloids, pyrrole alkaloids (lilalin, jatrophan), steroids (beta-sitosterol) and steroid saponins of furostane and spinostane type, tannins, polysaccharides, organic acids and amino acids Haladova et al. [10-19]. The structural formulas of some important Lilium compounds are shown in Figure 2. 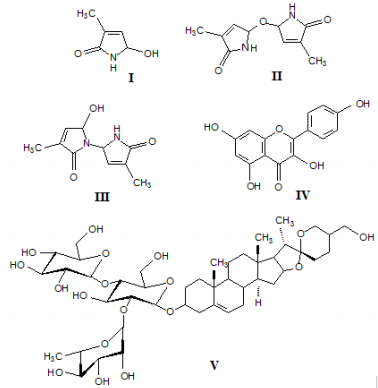 L. candidum extract is well known as an anti-inflammarory remedy for ulcers and burns and it is also proven means against healing of wounds Rasoulinezhad et al. [20]. Many steroids and steroid glycosides are likely to be responsible for the antiinflammatory effects of lilies Munafo et al. [21,22] Spirostanol and furostanol saponins were isolated from the fresh bulbs of L. candidum Mimaki et al. [14,15]. Beta-sitosterol and beta-sitosterol glucoside were isolated from the butanolic extract of petals [14,15].

Results of Tokgun et al. [23] indicate that L. candidum extracts have cytotoxic effects on human breast carcinoma cell line MCF7 cells and that this cytotoxic effect comes from P53-mediated stimulation of apoptosis. The anti-tumor effect may be due to the polysaccharide that were isolated by Han et al. [24] and which enhances immune function in H22 tumor bearing mice and inhibits H22 tumor growth. Also, alkaloids of showed cytotoxic activity against MCF-7 with IC50 of 244.8 µg/ml Al-Bayati [25].

Toxicology and Side Effects

All parts of the plant are toxic in cats. Cats are the only species known to develop renal damage from lilies Bates et al. [27]. The mechanism of toxicity remains unknown Hall [28]. Pyrroline and pyrrolidine alkaloids of L. candidum may be enrolled in inducing signifiant oxidative stress and DNA damage, which lead to cell apoptosis or necrosis Al-Bayati et al. [25].

Lilium candidum L. with beautiful large white flowers is a species which grows in Asia Minor and the Mediterranean. It is a bulbous plant with beautifully scented flowers and is used in the floral industry and in folk medicine. The plant contains a number of bioactive substances that exhibit anti-inflammatory, cytotoxic, hepatoprotective and antitumor effects. This data could be useful for health research programs, particularly in clarifying the pharmacological potential and activity of natural plant compounds.

The paper deals with Lilium candidum L., a well-known ancient plant in folk medicine for the treatment of burns, ulcers, inflammations and wound healing. The petals and bulbs of this plant contain many bioactive compounds. Many of them could also find their place in modern medicine.