Objective: Nasal olfactory parts which exposed to toxic agents can cause smelling disturbance. Chlorine is a chemical substance commonly used in the textile industry, to which factory workers are exposed.

b) worked in chlorine exposed area, and

c) agree to participate in the study, while the not exposed group worked in the free chlorine area.

a. suffered from rhinitis,

b. history of head and nose trauma,

d. history of smoking, and

Many patients suffer from olfactory disorders or smelling function disturbance. Based on research in America there are 2.7 million adults who have a disturbance in the sense of smell. Impaired smelling function experienced by a person increases with age [1]. Smelling disturbance is generally difficult to diagnose and treat, usually due to a lack of knowledge in the individual. Secondary invasion disorders may occur as a result of illness or as a primary complaint. Missing or diminished disappearance occurs in approximately 2% of the age group below 60 years and more than 50% in the over 60 years old group [2]. Some anatomical locations identified as the cause of smell function disturbances include olfactory abnormalities in mucous membranes in the nasal cavity, olfactory nerve disorders and central nerves. Smell function disturbance can be caused by pathological processes along the path of olfactory function. This disorder is considered similar to hearing loss which is a conductive or sensorineural defect. In the conductive defect (transport) there is a disturbance in the transmission of odor stimulus to the olfactory neuroepithelial.

While many reasons such as environmental exposure to contaminants and smoking have been found to contribute to smelling function disorders, in the sensorineural defect the process involves a more central nervous structure [3]. Another study investigated the detrimental effects of gasoline vapor exposure in causing respiratory disorders in the operator workers at the pumping station. The results of the study found that from 38 workers who carried out the scrubbing test by using the concentration of the threshold value and the recognition value of 6 ingredients there was a significant decrease in the olfactory function in the workers with exposure to gasoline vapor compared to the control group [4]. Overall, the main causes of the olfactory disorders are changes in the nasal or sinus cavities, upper respiratory tract infections due to virus and/or head trauma, endocrine disorders, tumors, psychiatric disorders, aging, medications, chemicals, environmental pollution and industrial and iatrogenic factors. These toxic substances associated with disturbances and loss of smelling function can be pollutants from industries such as chlorine. The ordinary textile industry uses large amounts of chlorine and involves a lot of manpower [3]. Based on the above health concerns, this study aimed to compare the smelling function between workers exposed to chlorine gas and those not exposed to chlorine gas in the textile industry.

ii) anterior and posterior rhinoscopy for vestibules, nasal mucosa and septum, lateral and inferior wall of the nose examination.

(2) worked in chlorine exposed area, and

(3) agreed to participate in the study,

while for the not chlorine exposed group:

(b) workers who were in the free chlorine area in the surrounding air.

(2) history of head and nose trauma,

(4) history of smoking, and

The smell test was conducted in odor-free rooms, using the standardized 6 types of smell substances.

The volatile agent used was placed in a closed tube. Each tube was filled with the respective standard concentrations for detection and identification,

The subjects of the study were asked to remove the volatile substances from tubes I to VI and place them 1 cm away from the right or left anterior nares at intervals up to one minute at ordinary inspiration, repeating 2-3 times (respiration 20 times per minute). After inhaling the subjects were asked to mention the type of smell inhaled. When this smelling step was complete, subjects were asked to proceed with the odor identification checklist which involved completing a standardized questionnaire. Sample size calculation based on different proportions, α: 5%; β: 20% and 95% confidence interval, showed recommended total samples were 40 workers for each group. Statistical analysis used Chi square test, independent sample t-test and Prevalence Ratio (RP). The significance level in the statistics was p<0.05, with 95% confidence level.

The results of demographic data of research subjects can be seen in Table 1 below.

The main aim in this research was to determine the effect of exposure to chlorine on the smell function disturbance in industrial workers at the textile factory. The main statistical test used was Chi- square test. The main outcome research results can be seen in Table 2 below. 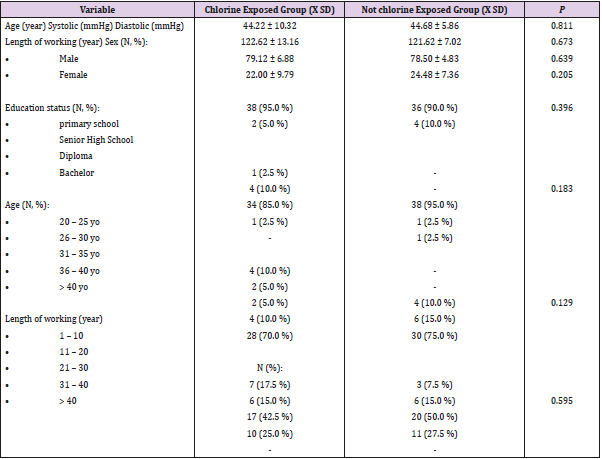 Previous studies in animals exposed to chlorine concentrations of 1 ppm caused olfactory disorders. In another study of the effect of 1 ppm chlorine exposure on 139 workers exposed to chlorine, 55 (36.5%) workers experienced shortness of breath requiring oxygen therapy [5]. Other study demonstrated that exposure to chlorine which exceeds the threshold can cause disturbance of smell. The results of this study reported that exposure to chlorine that exceeds the threshold can cause irritation of the mucosa and upper respiratory tract. Even with levels of 20-2000 ppm chlorine gas exposure can cause death due to the occurrence of epithelial damage in the respiratory tract. At a concentration of 17 ppm with 10 minutes of exposure time chlorine gas can cause damage to the eye mucosal epithelium and upper respiratory tract, one of which is the nasal mucosa [2]. Chlorine is a yellow-green non-combustible gas with a pungent irritating odor. It is widely used in textile industries and is one of the most commonly produced chemical substances worldwide. Chlorine gas is partially soluble in water, and upon inhalation is often deposited on hygroscopic surfaces such as the eyes, nose [6,7]. Chlorine reacts with water in the mucous membranes and airways to form hydrochloric and hypochlorous acids leading to acute inflammation of the conjunctiva, nasal mucosa, pharynx, larynx, trachea, and bronchi.

The oxidation of functional groups in cell components and the generation of free oxygen radicals are also thought to cause cellular injury [8,9]. In this study, there was no statistically significant difference in smell function between males and females (Table 2). To demonstrate that age more than 44 years has increased risk of occurrence of olfactory disturbance this can be seen by using the average age of research subject is 44 years, so the division of age group is more or equal to 44 years and less than 44 years, and the research result can be seen in Table 2. There were significant differences in olfactory interference between the age group ≥ 44 years compared to the age group <44 years in industrial workers exposed to chlorine (p< 0.049). This study obtained RP value of 6.882 which means that people in the environment exposed to chlorine with age ≥ 44 years are 6.882 times more likely to experience a disturbance of smell compared to subjects in the same environment exposed to chlorine with age <44 years. The value of RP of 6.882 can be interpreted also that the probability of people in the environment exposed to chlorine with age ≥ 44 years experienced a disturbance of smell was 87.31%. In addition to chlorine exposure, the age-related annihilation disorder is a degenerative process that involves the aging process which results in decreased surface area of olfactory epithelium and decreased adrenergic reserves in lamina propria while calcium bound protein elements also decrease in number resulting in a buffering disorder.

This layer is comprised of the alkaline phospholipid component which reacts rapidly to calcium carbonate resulting in protein denaturation which further causes damage to the olfactory epithelium [13]. Exposure to chlorine 2 ppm in the air can cause irritation to the nasal mucosa. Exposure to concentrated chlorine in the respiratory tract includes irritation of the upper respiratory tract which is characterized by hyperemic and edema of the nasal mucosa [14,15]. Exposure to chlorine in the concentration threshold between 0.1-0.3 ppm is still considered safe. 1-3 ppm concentration exposure causes mild mucous membrane irritation which can be tolerated for one hour, while 5-15 ppm causes moderate mucous membrane irritation. The limit of exposure at work for 15 minutes is recommended not to exceed 1 ppm (2.9 mg / m3). The long-term exposure limit for 6 hours is recommended not to exceed 0.5 ppm (1.5 mg / m3) [16]. Chlorine can break down and produce hypocaloric acid and hydrochloric which produce oxygen free radicals. In high-dose exposure, acids and free radicals damage the cell walls that interact with sulfhydryl groups in amino acids and enzyme systems in the mucosal epithelium. This causes edema, erosion, desquamation, and necrosis of epithelial cells [17-19]. Chlorine exposure can also interact quickly with special sensory structures of the nose, causing inflammation of the olfactory nerve. This often happens to workers exposed to chlorine [20].

Thanks goes to the patients and parents, and also all research assistants (ENT Residents and Nurses) who participated in this research, and to Director of DR. Sardjito General Hospital, Director & employer PT Argo Pantes Garment Tangerang and Medical & Health Research Ethics Committee Faculty of Medicine, Universitas Gadjah Mada that gave license, permission and approval for this research.

Objective: Nasal olfactory parts which exposed to toxic agents can cause smelling disturbance. Chlorine is a chemical substance commonly used in the textile industry, to which factory workers are exposed.

b) worked in chlorine exposed area, and

c) agree to participate in the study, while the not exposed group worked in the free chlorine area.

a. suffered from rhinitis,

b. history of head and nose trauma,

d. history of smoking, and