‘Target delineation in radiation oncology is the most important step of treatment [1]. Usually, contrast CT scan is done to delineate the target. Target volume may be different at different phases of scan after contrast. The differential volume in different phases after contrast infusion (Arterial, Veinous, Portal phase) may be responsible for either increase or decrease or even miss a part of the tumour which may have impact on clinical outcome. After contrast infusion, there is a time lag for the appropriate contrast material to reach the tumour tissue before it is washed out through the veins [2]. Appropriate timing of the scan is critical for optimal image quality, enhancement of the lesion and appropriate delineation of the target [3]. In ‘standard’ contrast CT scan, there is a ‘fixed’ time interval between the infusion and imaging scan. However, the ‘time lag’ or the time required to reach the tumour or target depends upon various patient related factors, such as

e. Height of the patient.

There is a need to individualize the ‘lag time’ between the infusion of contrast and scan. ‘Bolus tracking’ is a contrast CT scan method which is individualized to improve the image quality and hence delineation of the target [4]. In the present study, ‘bolus tracking’ was evaluated for primary liver tumours. In primary liver tumour, appropriate contrast imaging is critical to delineate the target. Contrast enhancing lesion volume in arterial, venous and portal phase may differ with timing of imaging after contrast infusion, and the target volume will be different or even miss the actual target in inappropriately timed scan. ‘Bolus tracking’ may help for appropriate phase imaging and proper delineation of the target. Breathing pattern and imaging in realtion to breathing cycle (eg- end of expiration) may also influence target volume. The bolus tracking method and standard CT simulation method work-flow is mentioned in Figure 1. 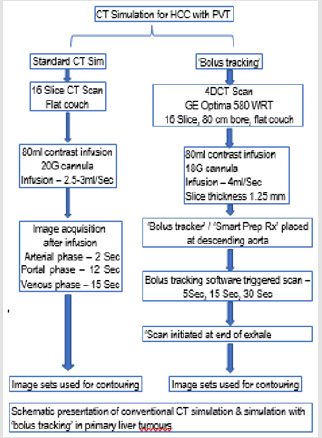 Initially 80 mL of contrast is injected using 18 G cannula at a flow rate of 4 mL per second. The slice thickness used is 1.25 mm. ‘Bolus’ tracker or Smart Prep RX is placed at descending aorta (Figure 2). Bolus tracking software trigerred scans of liver were taken at 5 seconds, 15 seconds and 30 seconds following aortic enhancement corresponding to aortic, portal and venous enhancement phases of liver (Figure 3). These scans were initiated at the end of exhale. Arterial phase was initiated (triggered) when the contrast reaches the bolus tracker. Triggering of arterial phase was done by bolus tracker and predifined Houndsfield unit. Veinous phase and portal phase was initiated at 15 sec and 30 sec after triggering of the scan. Bolus tracking mainly help in appropriate time (when the contrast reaches the bolus tracking region, defined by Hounds field unit change) for triggering the scan. Bolus tracking was well tolerated by our patients. The tumor enhancement and portal vein thrombus was appropriately visualized with bolus tracking. 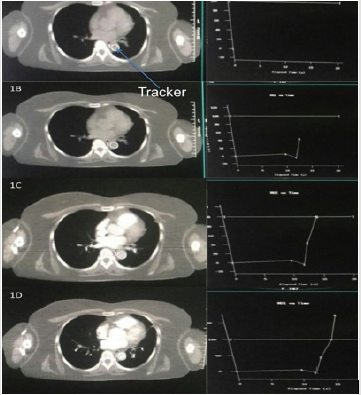 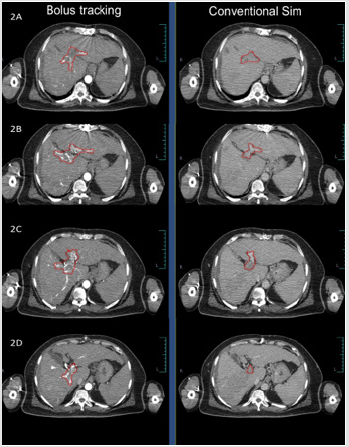 Figure 3: Comparison of target visualization with and without bolus tracking.

Target volume was better defined in arterial and portal phases after bolus tracking when compared to non-bolus tracked conventional contrast CT simulation scans (Figure 3). Imaging of liver is always facinating. Even in early CT scan era there was a concept of using contrast in phased manner to improve the contrast between liver parenchyma and tumour tissue [6,7]. Different dynamic scans use differential time gap between contrast infusion and scanning. Apart from the differential time gap, contrast flow rate and amount of contrast influence the image quality. Radiological diagnosis of the lesions were done mostly by the enhancement pattern in different phases and the architecture of the lesion. ‘Multiphasic’ CT scan for diagnosis of liver tumours are in use for last few decades. Multiphasic CT scan utilise the differential time gap between contrast infusion and image acquisition in arterial, venous or portal phase. Hepatic lesions are better visible in specific sequences, such as liver metastasis in arterial phase, primary liver tumour in venous phase and portal vein thrmobosis in portal phase. Liver parenchyma also uptake contrast. Differential contrast uptake between normal liver parenchyma and tumour defines the target volume.

‘Target delineation in radiation oncology is the most important step of treatment [1]. Usually, contrast CT scan is done to delineate the target. Target volume may be different at different phases of scan after contrast.