Mercurimetric Titration of Chloride in Presence of Sodium Nitroprusside as Indicator

1Department of Oncology, The University Hospital in Cracow, Poland

The mercurimetric titration of chloride with sodium nitroprusside used as indicator, is formulated. A systematic error involved, with location of the end point of titration is calculated at different concentrations of components in the system tested. The results of calculations, obtained with use of a computer program, are presented graphically.

The present paper gives an evaluation of systematic error in mercurimetric titration of chloride in presence of sodium nitroprusside Na2Fe(CN)5NO⋅2H2O as indicator [7-10]. The nitroprusside ions, Fe(CN)5NO-2, form a white precipitate of HgFe(CN)5NO [11,12]. The titration is performed at pH = 1.5 – 2 [13].

Here and in further parts of this paper, the charges zi of the corresponding species

are omitted, when written in terms of molar concentrations, i.e., the notation [Xi] is applied here, for simplicity.

(i) qualitative (specification of components forming a system, and species in the system thus formed),

(ii) qualitative (concentration of components), and

The set of concentration balances involves relations between concentrations of components and species, formulated – separately – for particular elements or cores ≠ H, O. For a redox system, the set of elemental balances is completed by Generalized Electron Balance (GEB), formulated on the basis of the 2f(O) – f(H) balance [15], within GATES/GEB. Some examples of redox systems were presented also in this Journal [16].

Static and dynamic electrolytic systems are distinguished. A dynamic system is realized in titration, where V mL of titrant T is added into V0 mL of titrand D, and V0+V mL of D+T mixture is obtained at defined point of the titration [17]. Concentrations of solutes (a) in D are denoted by C0 (for analyte), C01, C02, …, and (b) in T by C (for reagent), C, C2, …. In the reference system considered here, Hg(NO3)2 (C) is the reagent, NaCl (C0) is the analyte, Na2Fe(CN)5NO⋅2H2 (C01) is the indicator. Moreover, HNO3 (C1) is the component in T that prevents precipitation of HgO when Hg(NO3)2 solution is prepared as T.

Within GATES there are considered, among others, the systems in which a solid phase is formed. Examples of this kind are provided e.g. in [6]. There may also be a change in the solid phase composition, see e.g. [18].

The results of calculations preformed according to GATES principles with use of iterative computer programs [14], can be presented graphically on the related 2D diagrams, where the fraction titrated

is marked on the abscissa, as an independent variable, where C and C0 are expressed in mol/L, V and V0 in mL. This is the simple way to normalize the respective graphs, i.e., the independence of their shape from the V0 value.

The Φ plays also the key role in formulation of Generalized Equivalence Mass (GEM) concept [19], compatible with GATES principles. Within GEM formulation, the end (e) and equivalence (eq) points are related to the titration curve. At the end point, the visual titration is terminated, when indicated by a desired/ pre-assumed color change of the D+T mixture, or by the first appearance of a solid phase, e.g. AgI in the Liebig-Denigès method [6], or HgFe(CN)5NO in the titration considered here. Turbidity in D+T provides the appropriate indicator (indicating component), e.g., KI in the Liebig-Denigès method, or Na2Fe(CN)5NO⋅2H2O in the method discussed here.

Equation (1) can be rewritten as follows

As we see, the fraction V/Φ value is constant during the titration in D+T system; it depends only on the pre-assumed/ imposed values for C, C0 (intensive quantities) and V0 From Eq. (2) it follows that V/Φ takes the same value at the end (e) and equivalent (eq) points, i.e.,

where mA [g] and MA [g/mol] denote mass and molar mass of the analyte (A), respectively. From Equations (1) and (4) it follows that

However, Eq. (5a) cannot be applied for the evaluation of mA (Ve known, Φe unknown). Also, Eq. (5b) is useless (the “rounded” Φeq value is known exactly, but Veq is unknown), as Ve (not Veq) in visual titrations is determined experimentally.

Because the Equations (5a) and (5b) are inapplicable, the third, approximate formula for mA has to be applied, namely:

is named as the equivalent mass of the analyte A. The relative error in accuracy resulting from this substitution equals to

A conscious choice of an indicator and its color change during the titration is possible on the basis of analysis of the related titration curve. In particular, at Φeq=1/2 we have ϑ = 2φe −1. The ϑ values are usually expressed in %.

The numerical values for Φe are usually close to Φeq values expressed by a ratio of small natural numbers [19]. For example, in the system considered here we have Φeq = 1/2. The difference Φe- Φeq , when compared with the uncertainty of Φ value, is acceptable from the one-drop error viewpoint when |Φe- Φeq | < 0.003 [19].

The calculation specified below differs significantly from the one usually practiced in GATES, where a complete set of independent balances and equilibrium constants is applied. In particular, the GATES procedure can be applied to the model D+T system with NaCl (C0) + Na2Fe(CN)5NO⋅2H2O (C01) as titrand D (V0), and Hg(NO3)2 (C) + HNO3 (C1) as titrant T (V). However, the mercurimetric titration is applied also for the chloride samples from more complex media, where composition of a sample matrix is undefined [20]. Some kinds of the samples were also tested in clinical laboratories, e.g. [21]. Other indicators were also applied for this purpose, see [22].

In the simplified calculation procedure, charge balance and other concentration balances (except for Cl and Hg, and nitroprusside) are omitted. The concentration balances are confined to monophase system, including the end (e) point, i.e. the first point of the titration, where the solubility product (Ksp = [Hg][Fe(CN)5NO], pKsp = 8.6) of HgFe(CN)5NO is valid.

From concentration balances for Cl and Hg:

we have, by turns, 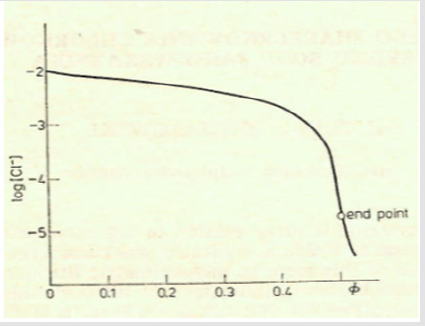 Let V = Ve denotes the volume of titrant where the solubility product Ksp of HgFe(CN)5NO is attained. Assuming that nitroprusside ion does not form protonated species [23], at V = Ve we have:

The Ve value can be found from Equation (18) according to zeroing procedure, realized with use of a computer program for particular V0, C, C0, C01, Ksp, K1Cl and K2Cl values, considered as parameters of this equation. Then the relative systematic error involved with mass of chloride determination will be calculated in accordance with the principles of Generalized Equivalence Mass (GEM) formulation [19,24], and illustrated in Figure 2. 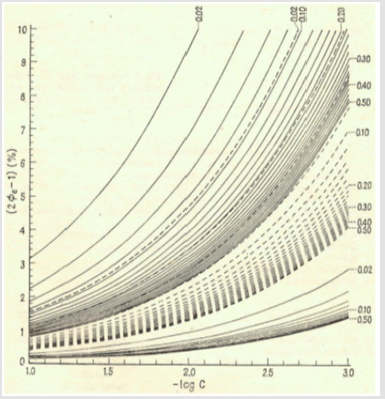 c) C01 = 0.001 (upper continuous lines); the numbers on right side and at the top of the figure indicate the corresponding q-values.

The paper provides an example of application of physicochemical (thermodynamic) knowledge involved with gaining the information involved with expected systematic error of analyses made at different concentrations of NaCl (C0), Na2Fe(CN)5NO⋅2H2O (C01) and Hg(NO3)2 (C). Generally, at given C value, the error of chloride analysis grows with a decrease of C0 and C01 values, as indicated in Figure 2.

Mercurimetric Titration of Chloride in Presence of Sodium Nitroprusside as Indicator

1Department of Oncology, The University Hospital in Cracow, Poland

The mercurimetric titration of chloride with sodium nitroprusside used as indicator, is formulated. A systematic error involved, with location of the end point of titration is calculated at different concentrations of components in the system tested. The results of calculations, obtained with use of a computer program, are presented graphically.