Methods: This cross-sectional descriptive-analytic study will be carried out in the pathology department of Al-Zahra Hospital. The population studied is women and men over the age of 40 who are under the tap due to their presence in the pleura area. These fluids are routinely loaded with no preservatives, and from them cell block samples are provided.

Conclusion: The staining pattern and intensity for p53 and desmin are useful panel for differentiation of adenocarcinoma and mesothelial cells.

Mesothelial cells are specific cells in serous cavities; when serous membranes stayed on process of inflammation or long time in effusion, these cells change in nucleus and cytoplasm feature. In some cases, morphological differentiation between reactive mesothelial cells and adenocarcinoma in serous effusions is extremely difficult [1]. One the other hand some serotypes have a malignant origin and determining the etiology of making effective therapeutic interventions and finding malignancy is more important. It is very difficult to differentiate between metastatic and reactive adenocarcinoma pleural effusions in serous fluids. A cytological examination of serum fluids is performed to diagnose the cancers involved in the peritoneum or pericardial spaces. About 75% of the malignant tumors are in the pleural metastasis of carcinomas [2,3]. A malignant pleural fluid is the first to see the presence of cancer in 46% of patients. The most common malignancies, such as pulmonary, breast, and gastrointestinal tumors, are the most common metastasis to serous fluids, which are more common in adenocarcinoma.

Metastatic carcinoma cells can have a wide variety in shape, which leads to difficult differentiation between mesothelial cell and adenocarcinoma cells in some cases. Often, when reactive cells are mixed with tumor cells in a cytological sample, the use of immunohistochemistry markers can help to differentiate them [4]. In order to avoid false diagnosis, the interpretation of immunohistochemical responses can help differentiate them and interpret the immunohistochemical response in each cell based on conventional cytology analysis. Immunocytochemistry can be done in samples such as flow cytometry [5]. Although, the differentiation is based on the usual morphological findings and history of the patient in terms of the presence or absence underlying malignancy [6]. In 15% of cases, the differentiation of mesothelial reactive cells from adenocarcinoma is not possible based on simple morphology. On the other hand, the person may not mention a history of primary malignancy and the positive posture is the first manifestation of adenocarcinoma. TP53 is one of the most frequently mutated genes in human cancers.

The most common mutations are single base substitutions that alter protein function. Some of the mutations being oncogenic confer gain-of-function properties [7]. Somatic mutations at specific residues have been associated with specific clinical phenotypes in different type of cancer. In addition to being frequently mutated in cancers, the gene is also highly polymorphic. The fact that some germline variants in the gene may modulate the individual susceptibility to develop cancer has evinced particular interest for the potential use as predictive markers [8]. In recent studies, immunoreactive antibodies against mesothelial cells have been introduced, which show no reaction with carcinoma cells. Recommended mesothelial markers include Calretinin, thrombomodulin, cytokeratin5/6, and HBME1 [9-16]. Therefore, the aim of this study is using immunohistochemistry to distinguish reactive mesothelial cells from metastatic adenocarcinoma in pleural effusions.

This cross-sectional descriptive-analytic study will be carried out in the cytology department of Al-Zahra Hospital. The population studied is women and men over the age of 40 who are under the tap due to their presence in the pleura area (Approval code:395975). These fluids are routinely loaded with no preservatives, and from them cell block samples are provided as follows: The liquid was centrifuged for 5 minutes at 2000 rounds, the supernatant was discharged, and 3 drops of plasma were added to the 3-drop of thromboplastin, so the specimen was coagulated. Then, put in a filter paper and enter the formalin and tissue processing machine, then slide and stack H & E (hematoxylin-eosin). Slides are evaluated by a researcher and counselor with a few microscopes for choosing to colonize immunocytochemistry. Examples of immunocytochemistry staining include two categories: A bunch of malignant tumors that have definite malignant criteria for cytomorphology (i.e., cell cluster, prostate cancer and clear nuclear and polymorphism), as well as confirmed pathology. The second group consists of negative mimics that have a proliferated mesothelium and lack malignant creatinine, either cytologically or clinically or in terms of imaging findings.

Table 1: Desmin and P53 status in each group of study. 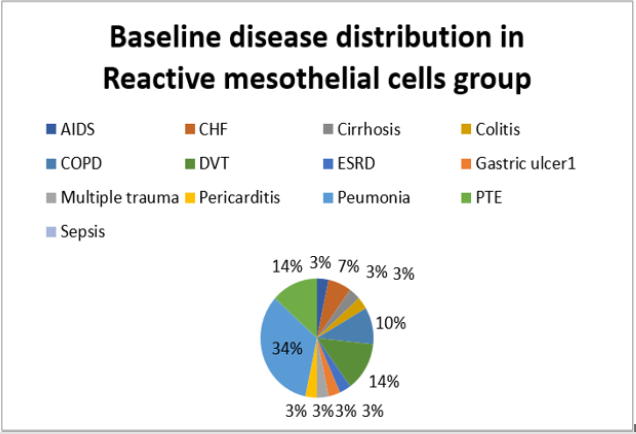 Comparison of the means of percentages of different patterns of staining between the two groups revealed that the mean of:

a. Strongly positive staining of p53 in reactive mesothelial cells was zero and in metastatic adenocarcinoma, it was 68.8 (P = 0.001);

c. Strongly positive staining of Desmin in reactive mesothelial cells was 71.9 and in metastatic adenocarcinoma, it was 6.3 (P = 0.001);

d. Weakly positive staining of Desmin in reactive mesothelial cells was 15.6 and in metastatic adenocarcinoma, it was 9.4 (P = 0.001); patterns of p53 and Desmin staining are shown in Figures 1 & 2. 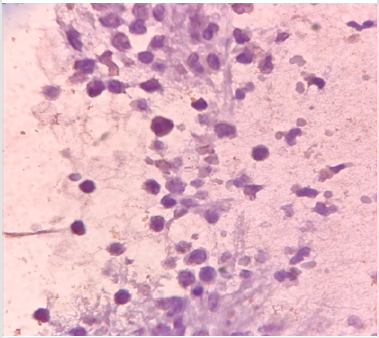 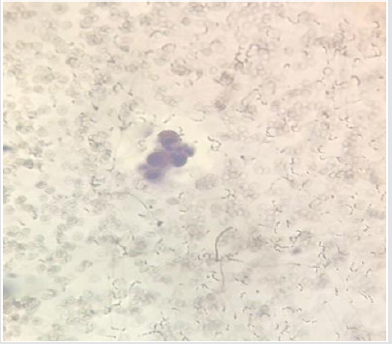 In some cases, reactive mesothelial cells may mimic malignant cells feature due to their nuclear changes, including enlargement and irregularity of nuclei with coarse chromatin and conspicuous nucleoli. Clinical data with respect to diseases such as anemia, cirrhosis, systemic lupus erythematosus, pulmonary infarction, renal failure, and AIDS can help in the interpretation of these conditions. Therefore, additional diagnostic procedures are mandatory in these cases [1]. The Tp53 gene is an important suppressor of the tumoral cells and mutant form seen in many cancers. Most mutations occur in a highly protected area, which includes exons 5 to 8. These exons form the central region of the p53 protein and play a major role in identifying the defective DNA. In the beginning of damage, the TP53 protein level increases in the nucleus of the cell and connects to the DNA. The cell that has the mutated gene of TP53 is no longer able work normally, and perhaps this is the reason why homozygous TP53 loss is a major cause of malignancies [2].

Mutations in this gene is very important, causing a deactivation or defect in the function of this protein, and will make the patient susceptible to creating a wide range. P53 protein is a multivariate transcription factor that contributes to the progression of the cell cycle and the planned cell death process and is associated with several key proteins involved in DNA replication, transcription, and DNA repair [3]. Li-Fraumeni Syndrome are 25 times more likely to develop a malignancy and the range of tumors in patients with transient Li-sy syndrome varies greatly. The most common types of tumors are sarcoma, breast cancer, leukemia, brain tumors, and adrenocortical carcinoma. The TP53 gene mutation has been identified in 50-70% of patients with lung cancer [4]. This study based on molecular methods. In the current study, immunohistochemically detectable p53 was seen in all malignant pleural adenocarcinomas and in few of the reactive hyperplasias. Strongly positive staining of p53 in reactive mesothelial cells was zero and in metastatic adenocarcinoma, it was 68.8 %Weakly positive staining of p53 in reactive mesothelial cells was 3.1% and in metastatic adenocarcinoma, it was 31.3%.

In a study p53 immunostaining showed nuclear positivity in 31 out of 41 malignant effusions (75.6%) and for the cases that showed p53 immunostaining only, 9 out of 10 cases (90%) were malignant [5]. Several studies have suggested that p53 immunostaining does not occur in benign mesothelium but is more common in malignant cells involving serous effusions [6-9]. In a study to differentiate between malignant and benign effusions, p53 immunocytochemical staining had been advocated as a malignant marker in 91 pleural and peritoneal serous effusions. p53 was significantly more expressed in malignant than benign effusions (p < 0.0001). p53 positivity rate was found in 75.6% malignant effusions true positive and in 6% of benign effusions [10]. In another study, mutations in TP53 were reported in patients with head and neck tuberculosis of 60%, which is consistent with the present study due to the positive TP53. In this study, all of the tumor’s participants were TP53 positive, which means the TP53 correctly detects all cancer patients [11].

Desmin is present at low levels during embryogenesis but increases as the cell nears terminal differentiation. Recently studies have shown that desmin may be important in mitochondria function. There is some evidence that desmin may also connect the sarcomere to the extracellular matrix through desmosomes that could be important in signaling between the extracellular matrix and the sarcomere [17]. Now several studies have shown that desmin is a highly sensitive marker for mesothelial cell differentiation and tumor invasiveness in several types of disease including cancer, ESRD, CVD, GI, infection and sepsis disease. Recently proteomics analysis for endometrial carcinoma also discovered the overexpression of desmin in carcinoma tissue. Therefore, desmin was further characterized in this study to confirm the potential variable diagnostic for various disease that analysis revealed that expression of desmin was positive in, ESRD, AIDS, CHF, cirrhosis, colitis, COPD, DVT, gastric ulcer, MT, pericarditis, pneumonia, PTE, and sepsis disease. Therefore, desmin could prove to be a new, sensitive, and specific marker that assists in the detection of various disease. However, more patient is needed to be tested to understand the potential value of this new biomarker.

Methods: This cross-sectional descriptive-analytic study will be carried out in the pathology department of Al-Zahra Hospital. The population studied is women and men over the age of 40 who are under the tap due to their presence in the pleura area. These fluids are routinely loaded with no preservatives, and from them cell block samples are provided.

Conclusion: The staining pattern and intensity for p53 and desmin are useful panel for differentiation of adenocarcinoma and mesothelial cells.