An endovascular-first approach has been adopted to treat symptomatic chronic venous insufficiency and/or varicose veins over the past 20 years and this is the same policy purported for venous malformations (VM). Endothermal treatment (laser or radiofrequency ablation) has become the first-line treatment for the refluxing great saphenous vein (GSV). Endothermal ablation (ETA) has the advantage of a shorter operative time, less trauma and decreased post-operative pain compared with open surgery. The National Institute of Clinical Excellence (NICE) guidelines state that open surgery is no longer acceptable and should only be performed where ETA or ultrasound -guided foam sclerotherapy is unavailable. However, the use of ETA has risks; thermal damage to superficial nerves is a known complication. Furthermore, patients undergoing ETA are currently advised to wear compression stockings for at least 1-week post-procedure to reduce pain and improve physical function, but this has a high non-compliance rate in places with hot and humid conditions such as Singapore. Foam sclerotherapy also has a known higher recurrence rate compared to ETA. Newer treatments, such as using VenaSeal™ Closure System (Medtronic plc, Galway, Ireland) (VCS), a non-thermal, non-tumescent endovenous ablative technology using a proprietary form of cyanoacrylate glue, has potential benefit for both patient acceptability and decreased risk of nerve injury. We present the first documented case of endovenous pharmacologic embolization of a symptomatic post-traumatic VM in the calf using the VCS.

A 32-year-old lady (ASA 1; BMI 25.1) presented to the specialist vascular outpatient clinic with worsening swelling and pain of her right calf for the past 2 years. Onset was originally noted 10 years ago following a road traffic accident, which caused a right tibia-fibula fracture and significant bruising to her right calf. She had undergone a radiofrequency ablation of her symptomatic right above knee GSV varicosities (CEAP 3 disease) 3 years prior at an external institution; however, the pain and swelling persisted almost immediately post-operatively. She also described the feeling of heaviness especially towards the end of the day, which was affecting her quality of life and her work as a hairdresser. She had noticed that the varicosities she previously had were reappearing and that the skin over her shin and ankle had darkened. She had a CEAP score of C4b Es As Pr and a revised Venous Clinical Severity Score (rVCSS) of 14. A venous duplex ultrasound scan revealed an incompetent deep venous system, saphenous-femoral junction (SFJ), and GSV along its entire length, which had recanalized proximally and was patent to the foot (Figure 1a).

The maximum diameter of the GSV was 8 mm just distal to the SFJ and the rest of the GSV ranged from 3-5mm in maximum diameter to the mid-calf region. Tortuous channels of vessels were noted at the medial aspect of the calf with areas of thrombosis. The patent tubular channels demonstrated venous flow. No significant arterial supply was noted. Appearances were in keeping with a low flow vascular anomaly, with predominantly a venous component. A dominant dilated vein appeared to communicate with the GSV at the level of the knee joint and within the distal calf (Figure 1b). MRI of the right calf demonstrated numerous small rounded high signal T1- and T2-weighted lesions within the subcutaneous fat planes of the medial aspect of the right calf. The lesions enhanced post-contrast without any evidence of solid mass or rim enhancing collection. There was no evidence of involvement of the musculature (Figure 1c). A diagnosis of a slow flow VM was made by the hospital’s AVM multi-disciplinary team consisting of a vascular surgeon, interventional radiologist and muscular-skeletal radiologists. It was decided to treat the lesions endovascularly using a combination of VCS and sclerosant (2.0% liquid sodium tetradecyl sulphate (STS), FibroveinTM, STD Pharmaceutical Products Ltd, Hereford, UK). 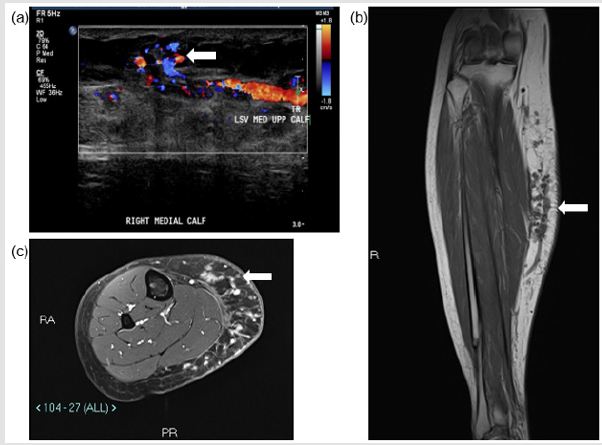 The principle of treatment was to obliterate the GSV using VCS followed by direct injection of sclerosant percutaneously into the superficial venous lesions. One of the reasons VCS was used to ablate the truncal vein was that one of the authors (TYT) has used the device successfully in recurrent GSV reflux post endothermal ablation on numerous occasions with no recanalization at 6 months on duplex ultrasound. The procedure was carried out under general anesthetic and antibiotic cover. The GSV was accessed using a micro puncture access system and Seldinger technique just above the medial malleolus and a second access point just above the knee joint. Venogram performed from the distal GSV access point revealed an abnormal dilated venous structure within the subcutaneous tissue of the medial aspect of the calf, which appeared to communicate with the GSV and draining into the deep venous system (Figure 2a & 2b). The deep veins were patent throughout. There was no evidence of filling of the small venous malformations, which were evident on the MRI. On table USS showed no obvious flow and was thought to be likely in keeping with thrombosis. Obliteration of the entire extent of the GSV from approximately 5 cm from the SFJ to the point of access above the medial malleolus was carried out using VCS as per instructions for use except that a double dose of glue was given initially to mitigate the chances of recurrence.

This was followed by accessing the superficial dilated tributary of the GSV within the calf from the most cranial access point using a microcatheter. The two areas of communication of this vessel with the deep veins were occluded using 2 mm x 14 cm micro coils (Figure 2c). Due to tortuosity, the actual large draining vein within the subcutaneous tissues of the calf could not be accessed by an endovascular approach. The vein was directly punctured percutaneously and was obliterated using STS foam (Figure 2d). A follow-up ultrasound scan (USS) performed 24 hours later showed thrombosis of the entire length of the GSV along and it is superficial tributary within the subcutaneous fat plane of the calf. No evidence of perfusion noted within the calf venous malformations (Figure 3). The deep veins of the right lower limb remained patent. The patient was given subcutaneous heparin to prevent deep vein thrombosis and oral NSAID for one week to attenuate the effect of thrombo-phlebitis and was subsequently discharged 24 hours later. Ultrasound follow up of the calf vm at 2 weeks and 3 months showed no flow within the venous anomaly and the GSV remained occluded to the ankle. The patient’s symptoms were much improved at the 2 follow-up time points and her lower leg varicosities had shrunken in size. Subjectively, she had experienced minimal postoperative pain (1/10) and no inflammation. Her rVCSS was 8 and 6 at 2 weeks and 3 months, respectively. 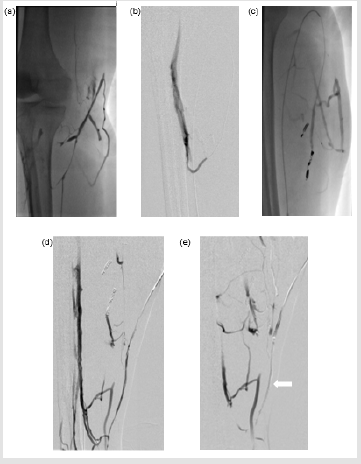 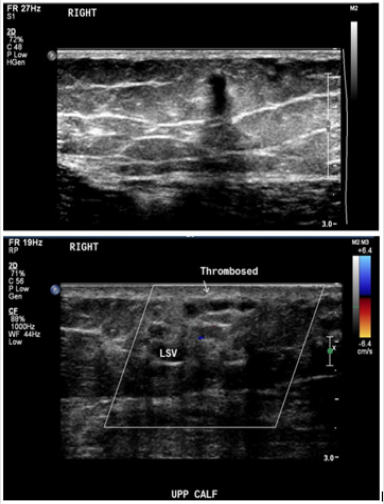 Although VMs are the most common type of congenital vascular anomaly, traumatic VMs are uncommon. The anatomy, flow characteristics, location, and etiology direct the management of these lesions. We present the first documented case of endovenous pharmacologic embolization of a symptomatic post-traumatic VM in the calf with cyanoacrylate glue using the VCS device. Sclerotherapy is considered the gold standard first line treatment for VM [1] and STS is commonly used as a sclerotherapy agent for varicose veins with established safety profile. It is best suited for treating smaller lesions with lower resistance. However, leakage of the STS foam from target site can cause non target tissue damage [2]. Other commonly used agents are Polidocanol, Ethanol and Bleomycin. Systematic clinical reviews evaluating the effectiveness of treatments for VM concluded that there were significant treatment bias and flawed methodology, which precluded the reviewers to comment on the superiority of one treatment over the other [3].

The reviews also noted that there was a wide range of procedural success rates reported between different studies. Most studies agreed that multiple treatment sessions were required [4]. Complication rates from sclerotherapy can range from as high as 18 % for ethanol to about 6% for other sclerosant agents [5]. The VenaSeal™ Closure System, using a proprietary form of cyanoacrylate glue, has provided a new modality of treatment for patients with symptomatic chronic venous insufficiency and/ or varicose veins. It is a non-thermal, non-tumescent endovenous technology that does not require use of post-operative compression hosiery. We report the first documented case of GSV occlusion using the device in a patient with symptomatic post-traumatic right calf VM. This treatment modality was selected in our patient based on the principle of treatment for vascular insufficiency. The post traumatic slow flow venous anomalies in our case were along the course of a superficial branch of the GSV within the calf. We postulated that by using a combination of obliterating the venous drainage along the GSV using VCS and direct sclerosants injection of the superficial calf vein draining the VM, it would eventually lead to complete exclusion of the superficial calf VM. Follow-up duplex ultrasound showed complete thrombosis at 2 months and the patient’s symptoms were greatly improved.