Extracellular vesicles (EVs) are involved in the pathogenesis of CV diseases through several biological mechanisms that support microvascular inflammation, arterial stiffness, vascular calcification, atherosclerotic plaque shaping and rupture, endothelial dysfunction, hypercoagulation and thrombosis, cardiac remodelling, and kidney dysfunction. Platelet activation, which is associated with secretion of EV, is common for arterial hypertension. The aim of the mini review is to discuss the role of platelet-derived micro vesicles as predictive biomarker in hypertension. It has found that elevated levels of EVs and altered signature of platelet-derived vesicles are biomarkers of endothelial dysfunction, accelerating atherosclerosis, pro-coagulation state, and poor clinical outcomes. The diagnostic and predictive roles of this biomarker in hypertensive patients require to be investigated in large clinical trials in the future.

In fact, EVs mediate autocrine and paracrine signals that are enabled to reconstructing the homeostatic micro-environment in heart and vessels [7]. EVs are released a wide spectrum of cells, including endothelial cells, cardiomyocytes, red blood cells, mononuclear / macrophages, as well as platelets. EVs, which are produced by endothelial precursors and mature endothelial cells, as well as mononuclears, are under investigations for long time respectively and there is evidence regarding predictive capability of altered circulating number of EVs in established CV disease including hypertension [8,9]. On contrary, the exact role of plateletderived micro vesicles in pathogenesis of hypertension remains to be not fully discovered. The aim of the mini review is to discuss the role of platelet-derived micro vesicles as predictive biomarker in hypertension.

Extracellular vesicles (EVs) are defined as small sized (<1000 nm) cell membranous originated structures that secreted by various cells (platelets, red and white blood cells, endothelial cells, precursors / stem cells, cardiomyocytes, and even tumor cells) into human fluids and contained wide range of proteins, hormones, signalling molecules, lipids, mRNA, miRNA, and others [10,11]. There are at least two distinct subpopulations of EVs (exosomes and micro vesicles [MVs]), which distinguish each other in size, compounds, immune phenotypes and wide range of formation modes. Exosomes are sufficiently smaller to MVs (size averages are 30-120 nm and 40–1000 nm respectively) and are shaped by the endocytosis of multivesicular bodies and are shed from cells by exocytosis. On contrary, MVs are defined as membranebound vesicles, which are released from the plasma membrane. Additionally, surface-specific antigens, which are presented for both populations of EVs, are different, but they overlap between exosomes and MVs that does not allow differencing both populations of the particles. Physiologically, EVs are a cargo for molecule transfer, auto / paracrine signalling, cell-to-cell cooperation, playing a pivotal role in immune response, vascular integrity, cellular senescence, tissue reparation and development, angiogenesis and neovascularization [12,13]. In fact, EVs are able to mediate the exchange of appropriate information between various cells. EVs were found witness and biomarkers of several diseases, such as CV, autoimmune, infective, metabolic, renal, rheumatic, neurological, ocular diseases and malignancy [14-17].

It has been found that upon activation, blood platelets are able to release two types of EVs, i.e. micro particles and exosomes. Platelet-derived micro particles are characterized by average of size of 70-100 nm and the phosphatidylserine (PS) presentation at their surface, which mediates their capabilities in coagulation and thrombosis [20]. On contrary, platelet-derived exosomes are characterized by their small size (<80 nm) and the presence of CD63 antigen, which is known as the tetraspanin that belongs to the transmembrane 4 superfamily [19,20]. CD63 plays a pivotal role in the role in the activation of cellular signalling cascades that trigger AkT, FAK-related non-kinase polypeptide / protein tyrosine kinase-2 (PTK-2) and mitogen-activated protein (MAP) kinases, attenuates an adhesion of circulating monocytes / macrophages onto endothelial cells through the regulation of P-selectin (CD62) trafficking, as well as promotes vascular endothelial growth factor receptor (VEGFR) signalling and internationalization [21]. All these factors are embedded into cell-to-cell cooperation and cell interactions with the extracellular matrix. Moreover, EVs expressing Ms4a2/FceRI on the surface are able to be triggers for degranulation of circulating cell in response to other stimuli [22]. Additionally, some EVs may express CD41 (Integrin alpha-IIb) on their surface, which in a complex with CD61 may be a receptor for thrombospondin, fibronectin, vitronectin, fibrinogen, and von Willebrand factor playing a crucial role in blood coagulation [22,23].

The populations of the platelet-derived EVs may distinguish each other in not just their size and immune phenotype, but yet they could have different in density (utilized as sucrose density gradient in ultracentrifugation), proteomic and lipidomic profiles [24] Labeling of platelet-derived EVs is reported in the Table 1. Although there is difficulties in identification of distinction between both two types of EVs (micro particles and exosomes) in cargo potency, immune heterogeneity and size averaging of EV populations allows identifying them using several methods for their isolation and quantification, including conventional and cryo-enhanced electron microscopy, immuno-gold labelling, laser-scanning confocal microscopy, nanoparticle tracking analysis and flow cytometry [25,26] However, lack of generally accepted methods as a standard for determination, isolation and quantification of platelet-derived EVs, sufficiently limits our efforts in understanding their biological role in the pathogenesis of several states and diseases [27,28]. 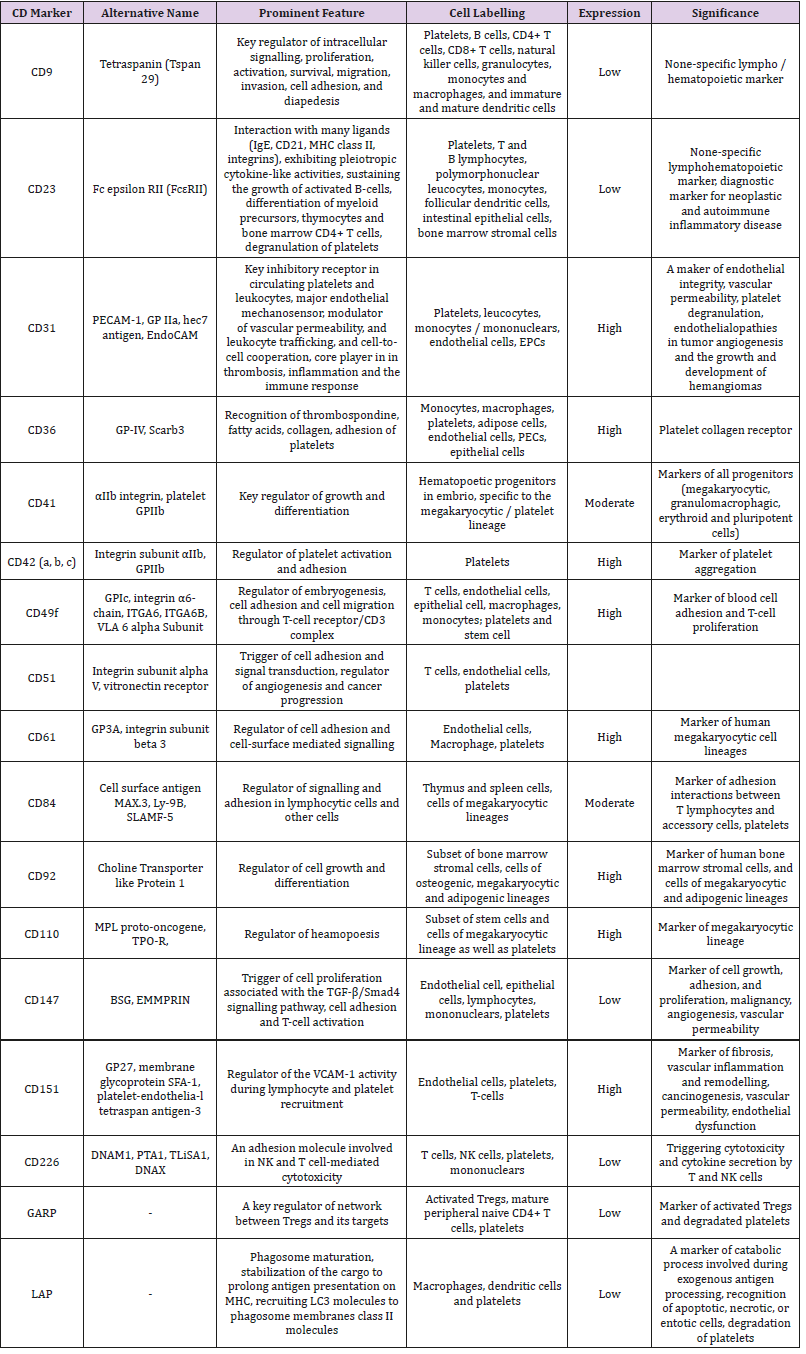 OThere is large body of evidence regarding pivotal role of platelet-derived vesicles in the pathogenesis of CV diseases [29- 31]. In a result of several triggers, such as ischemia, hypoxia, anemia, inflammation, shear stress, blood turbulence, platelets are activated, aggregated, then they changed them contain enriching phospholipids and GPs, prepare for vesiculation via shaping spaced architectonic and exocytosis and release vesicles into circulation. Regulation platelet vesiculation is mediated via platelet Ca (2+)-ATPases by cyclic AMP through the phosphorylation of the Rap1 protein. Platelet-derived vesicles exhibit haemostatic properties, mediated aggregation of blood cells including whole platelets, promote coagulation, stabilize the vasculature and maintain endothelial cell barrier integrity [32]. Therefore, platelet-derived vesicles may demonstrate pro-atherogenic, pro-inflammatory, and immunomodulatory, even anticoagulant activity depending on triggers that induce their releasing and the expression of their surface certain molecules [33-35]. For instance, phospholipidenriched platelet-derived vesicles that express Annexin V possess as pro-atherogenic and pro-coagulant particles [36].

Platelet activation is common for arterial hypertension and it is associated with an increase in platelet membrane P-selectin expression and a circulating number of platelet-derived vesicles enriched phosphatidylserine, which indicates pro-coagulant activity [30]. It is been postulated that activation status of platelets in patients with uncontrolled arterial hypertension is predominantly a result of elevated shear force, low-grade systemic inflammation and increased sympathetic activity [31]. Yet, there is evidence that preeclampsia / eclampsia negatively impacts on the cerebral circulation and that this effect is associated with activated platelets and platelet-derived vesicles [32]. Moreover, placental and maternal platelet-derived EVs participate in critical signaling mechanism for feto-placental development and impairment in releasing and contents of vesicles in biological fluids depending on their origin is considered in the context of the initiation and progression of the pathogenesis of preeclampsia / eclampsia [33]. In fact, non-pregnant women with the risk factors of preeclampsia / eclampsia (overweight / obesity, diabetes mellitus, rheumatic disease, systemic vasculitis, dyslipidemia, anemia) as well as individuals with arterial hypertension were identified to have elevated levels of circulating platelet-derived EVs [42-44].

It has been suggesting that circulating platelet-derived EVs can induce vascular dysfunction, and through immune modulation they mediate thrombotic potency of plasma and remodeling of vasculature. This mechanism appears to be common for arterial hypertension and preeclampsia, although initial triggers for both can be distinguished (i.e., shear stress and sympathetic activity for hypertension and hypoxia/ischemia, damage of placenta villi for preeclampsia). Despite these differences, final result of platelet activation and releasing of platelet-derived vesicles remain similar and it is considered an endothelial dysfunction, vascular remodeling and pro-coagulation state, which affect target organ damage and contribute to poor clinical outcomes. Moreover, elevated levels of EVs and altered signature of platelet-derived vesicles have been recognised having a discriminative potency to predict heart failure developing in patients with CV risk factors [45,46]. Renal denervation that was able to sufficiently reduce sympathetic activity in patients with resistant hypertension led to a reduction of platelet activation, monocyte-platelet aggregates and a tendency to lowering circulating number of activated platelets in close relation to declined levels of several inflammatory markers, such as tumor necrosis factor-alpha, interleukin-1beta, interleukin-12, and monocyte chemoattractant protein-1 [31,47].

Although there is strong interrelation between endothelial dysfunction in hypertension and spontaneous generation of platelet- derived vesicles, whether tight control for blood pressure will correspond to a significant decrease of platelet aggregation and reducing number of circulating pro-coagulant platelet-derived vesicles is not fully understood [48]. However, diminishing of pro-coagulant activity of circulating platelet-derived vesicles can be achieved during effective antihypertensive therapy [47,49]. It has been noted that a wide range of antihypertensive drugs, such as calcium channel blockers, angiotensin-II receptor antagonists, angiotensin-converting enzyme inhibitors, are able to hamper the process of micro vesiculation and thereby to reduce a circulating number of platelet-derived vesicles [49-51]. Taken into consideration the role of the vesicles in the pathogenesis of hypertension a variable ability of several antihypertensive drugs to modify shaping and releasing of the particles onto circulations is showed to have promising and require more investigations in the future.

Elevated levels of platelet-derived vesicles are found in a wide range of thrombophilia-related condition and CV disorders including hypertension. Platelet-derived vesicles are biomarker of endothelial dysfunction and pro-coagulative activity, which can be discussed a predictor of CV complication, such as atherothrombotic events (stroke, myocardial infarction), heart failure and kidney insufficiency. The diagnostic and predictive roles of this biomarker in hypertensive patients require to be investigated in large clinical trials in the future.

Extracellular vesicles (EVs) are involved in the pathogenesis of CV diseases through several biological mechanisms that support microvascular inflammation, arterial stiffness, vascular calcification, atherosclerotic plaque shaping and rupture, endothelial dysfunction, hypercoagulation and thrombosis, cardiac remodelling, and kidney dysfunction. Platelet activation, which is associated with secretion of EV, is common for arterial hypertension. The aim of the mini review is to discuss the role of platelet-derived micro vesicles as predictive biomarker in hypertension. It has found that elevated levels of EVs and altered signature of platelet-derived vesicles are biomarkers of endothelial dysfunction, accelerating atherosclerosis, pro-coagulation state, and poor clinical outcomes. The diagnostic and predictive roles of this biomarker in hypertensive patients require to be investigated in large clinical trials in the future.