Rapid population growth and unplanned urbanization are causing an insufficient drinking water supply, which is a major problem in the Kathmandu Valley, Nepal. People are therefore using groundwater for drinking, cooking, bathing, and laundry purposes [1]. In previous studies conducted in the Valley, various types of pathogenic bacteria, viruses, and protozoa have been detected, demonstrating the severe microbial contamination of different water sources [2-9]. Some of the possible causes of contamination for these pathogens in water bodies might be improper management of sewage, discharge of untreated industrial and hospital waste, runoff from urban surfaces, agricultural lands using animal manure, free-roaming animals, and animal farms near river banks [10,11]. A high demand for livestock products led to heavy discharge loads of feces into the environment [12]. Each gram of feces contains millions of bacterial cells, including diverse populations of bacteria [13,14]. Fecal pathogens, when discharged into the water environment, can survive for a long period, serving as a potential source and reservoir of waterborne diseases. Numerous outbreaks have been documented through waterborne transmission of fecal pathogens, resulting in mild gastrointestinal illness to even death [15-17].

A total of 16 water samples were collected from 13 shallow dug wells, a spring, a deep tube well, and a river from the Kathmandu Valley in August 2015 [22]. The sample ID for water samples were labelled as KTM. In addition, 16 composite fecal-source samples were collected from feces of two chickens, three dogs, two ducks, three pigs, three ruminants, and three sewage samples from human in December 2015 [23]. For fecal-source samples, they were labelled from initial name based on type of fecal-source except for duck. A sterile spoon was used to collect the fecal-source sample, which was then stored in a 50-mL plastic tube. Each composite sample was mixed thoroughly, and 300-400 mg of the sample was mixed with autoclaved phosphate buffered saline to obtain a 1% fecal suspension.

Bacterial DNA from the water samples was extracted using CicaGeneus DNA Extraction Reagent (Kanto Chemical, Tokyo, Japan) as previously described [2]. A similar procedure was followed for bacterial DNA extraction from the fecal-source samples by using 5 mL of the 1% fecal suspension.

DNA microarray targeting 16S rRNA genes of 941 pathogenic bacterial species/groups, including biosafety level (BSL) 2 and 3 pathogens and other opportunistic BSL 1 pathogens listed by the Japanese Society for Bacteriology, was used. The DNA microarray used in this study was developed by Prof. Takayuki Ezaki at Gifu University, Japan, and was purchased from AMR Inc. (Gifu, Japan). The applicability of the microarray to environmental samples had been assured by the developers and previously applied to landfill leachets, river water samples, and shallow well groundwater [5,24,25]. In brief, Cy3-labeled polymerase chain reaction (PCR) products were prepared by using a PCR mixture (50 µL) containing 25 µL of SapphireAmp Fast PCR Master Mix (Takara Bio, Kusatsu, Japan), 0.25 µL each of 15 pmol/µL forward and reverse primers [5,26-28], 1 µL of DNA template, and 23.5 µL of ultrapure water. The thermal conditions were as follows: 94°C for 1 min, followed by 30 cycles of 98°C for 5 s, 55°C for 5 s, and 72°C for 10 s, and finally 72°C for 10 s. Agarose gel electrophoresis was performed to confirm the amplification of Cy3-labeled PCR products, followed by purification of the products using a NucleoSpin Gel and PCR Cleanup Kit (Macherey-Nagel, Bethlehem, USA).

DNA microarray hybridization and scanning were performed as described previously [5]. Briefly, the hybridization mixture was prepared by adding 5 µL of 10× Gene Expression Blocking Agent (Agilent, Waltham, USA) and 1 µL of 25× Fragmentation Buffer, which was mixed with 19 µL of Cy3-labeled PCR product solution. The tube was incubated at 60°C for 29 min and then cooled on ice for 1 min. Twenty-five microliters of 2× Hybridization Buffer was added to the tube and centrifuged at 15,300 × g for 1 min at 4°C. Then, the samples were hybridized with the pre-hybridized array at 55°C for 16 h. The microarray slides were washed and scanned with a GenePix 4000B (Molecular Devices, Sunnyvale, USA), and the scanned images were processed using GenePix Pro 7 software (Molecular Devices). Analysis of the scanned image data was performed as described previously [5].

Table 1: Pathogenic bacterial species/groups present in >70% of both water and fecal-source samples. 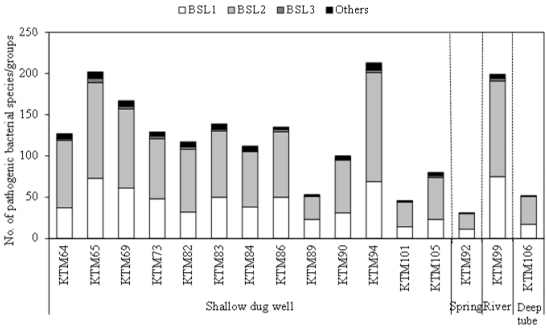 A classification at the genus level revealed that 12 genera (Acinetobacter, Agrobacterium, Anaplasma, Arthrobacter, Bordetella, Caulobacter, Flavimonas, Kingella, Legionella, Moraxella, Pseudomonas, and Xanthomonas) were present in 15 (94%) of the 16 samples tested. This result was comparable to that of a previous study, where genera such as Acinetobacter, Arthrobacter, Brevibacterium, Legionella, and Pseudomonas, were detected in 82% (23/28) of water samples, which had been collected in 2014 [27]. Waterborne pathogenic bacteria that could be transmitted through the fecal-oral route were identified, whereby Vibrio cholerae, Klebsiella spp., and Salmonella enterica serovars were detected in 63%, 38%, and 31% of the water samples tested, respectively. Detection of various waterborne pathogenic bacteria in groundwater and river water samples indicates that there is a serious risk of pathogen infection through consumption of contaminated groundwater.

As shown in Figure 2, the number of pathogenic bacterial species/groups detected in each of the fecal-source samples ranged from 57 to 503. A total of 829 pathogenic bacterial species/groups were present in at least one of the samples tested. The highest number of pathogenic bacterial species/groups (503) was found in the human sewage S7, followed by fecal-source samples of duck (Duck1, 493) and chicken (C10, 481). Out of 611 BSL 2 pathogens targeted, 317, 316, and 310 pathogens were detected in the samples Duck1, S7, and C10, respectively. Five BSL 2 pathogens (Borrelia recurrentis, Clostridium histolyticum, C. symbiosum, Helicobacter pylori, and Suttonella indologenes) were detected in all the fecal-source samples tested. Of the total 14 BSL 3 pathogens targeted, at least one species/group was detected in all tested samples, with a maximum of 8 pathogens identified in a single sample (C10), followed by 7 pathogens in the S7 sample, and 6 pathogens in the C4 and D4 samples. Waterborne pathogenic bacteria such as H. pylori, Klebsiella spp., S. enterica serovars, V. cholerae, and Yersinia enterocolitica were detected in >60% of the fecal-source samples tested. According to the World Health Organization (WHO), at least 2 billion people worldwide use fecal contaminated drinking water, and such use is estimated to cause 500,000 deaths due to diarrhea each year [29]. In Nepal, diarrhea and gastroenteritis are the leading causes of waterborne diseases (48%), followed by typhoid/paratyphoid fever (18%) [30]. Thus, preventive management approaches are required to control the risks associated with human and animal feces. 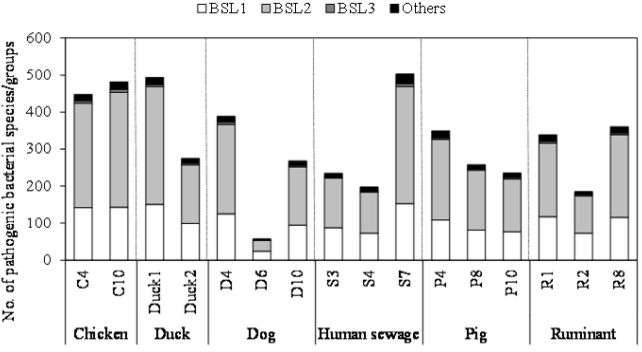 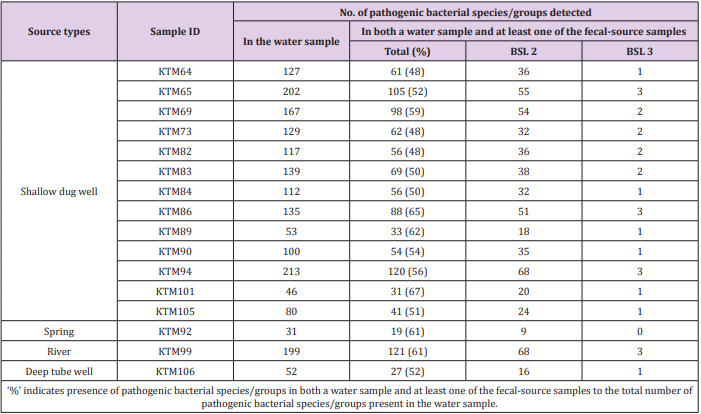 Table 2: Numbers of pathogenic bacterial species/groups detected in both a water sample and at least one of the fecal-source samples tested. 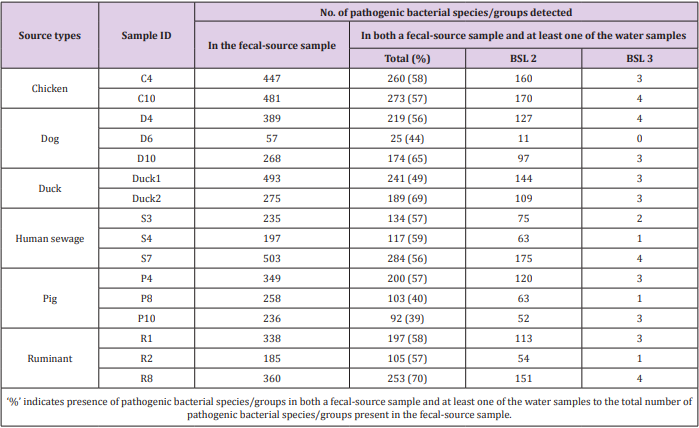 Table 3: Numbers of pathogenic bacterial species/groups detected in both a fecal-source sample and at least one of the water samples tested. 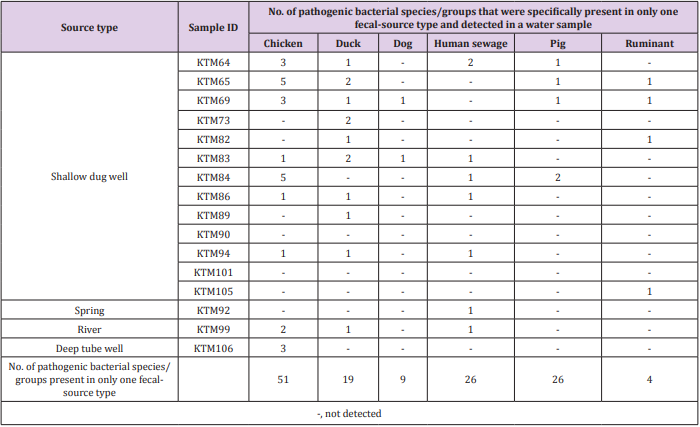 Table 4: Numbers of pathogenic bacterial species/groups detected in only one fecal-source type.