Objective: To investigate the characteristics of nosocomial infection in a department of interventional vascular surgery (DIVS) treated with transcatheter arterial chemoembolization (TACE).

Methods: The incidence of nosocomial infection was retrospectively analyzed in inpatients from January 2006 to December 2015 in DIVS.

China had about 50% primary liver cancer (PLC, mainly hepatocellular carcinoma (HCC)) of the world [1]. Transcatheter arterial chemoembolization (TACE) is the most common treatment for primary liver cancer (PLC) in China [2]. However, PLC is prone to nosocomial infection. Once infection occurs, it will limit the interventional treatment and affect the prognosis of patients [3]. But there are few reports about nosocomial infection in HCC treated with TACE. The present report was a retrospective analysis of nosocomial infection in hospitalized patients in Department of Interventional Vascular Surgery of the Third Affiliated Hospital of Sun Yat-sen University from Jan 2006 to Dec 2015.

Inpatients in Department of Interventional Vascular Surgery (DIVS) were analyzed from January 2006-December 2015 in the Third Affiliated Hospital of Sun Yat-sen University. The diagnosis of primary disease meets diagnostic criteria for various diseases. The diagnosis for nosocomial infections were based on the Diagnostic Criteria for Nosocomial Infections (Trial) [4]. In brief, nosocomial infection is diagnosed by positive laboratory results of pathogen and a compatible clinical syndrome occurring 72 hours or longer after admission, or less than 72 hours after admission if patients had been admitted to the hospital before and discharged within the previous one month. The outcomes of deaths attributable to nosocomial infection were judged by a physician. TACE was carried out as the report [5]. Other invasive procedures were performed according to the normal operation guidelines. On the day postsurgery, patients were given glucose and saline, cephalosporin second- generation antibiotics to prevent infection, and protection treatment for liver function. This study was approved by the ethics committee of the hospital. Informed consent of patients was obtained prior to treatment.

In the department from Jan 2006 to Dec 2015, a total of 10192 patients were hospitalized, including 7862 PLC, 1000 liver metastasis from other primary malignant lesions, and 1021 other vascular and biliary system-related diseases. The distribution ratio of nosocomial infections in inpatients in each year was shown in Figure 1. The total number of inpatients was increased from 2006 to 2015, to which the composition ratio of nosocomial infection was not correlated (p>0.05, Spearman test). The constitution ratio of nosocomial infection was 8.13%, 7.2%, and 2.11% in other vascular and biliary system-related diseases, liver metastasis from other primary malignant lesions, and PLC, respectively (83 /1021, 72/1000, 166/7862 patients, p<0.01, Chi-square test). Nosocomial infections were occurred in 341 cases. Three hundred and twenty- one patients occurred nosocomial infection; the percent of infected patients was 3.1%. The death of nosocomial infection had no significant difference from that of non-infected patients (6/321 vs 35/9871). The gender distribution was 247 males and 74 females, 16-89 years old, mean ± standard deviation 53.1 ± 14.3. The top three sites with the high infection rate were the peritoneum and digestive system, respiratory system, and blood system, which were 48.7%, 28.7%, and 14.1% (166, 98, and 48 patients), respectively. The other sites were urinary system, soft tissue, surgical site, cardiovascular and mouth (17, 6, 2, 2, and 2 patients, respectively.), as shown in Figure 2. 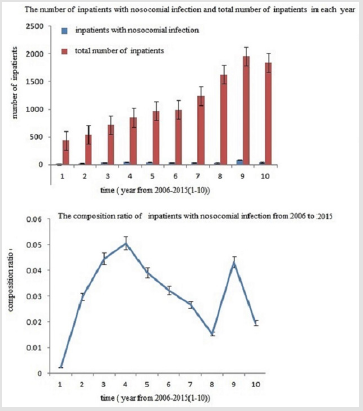 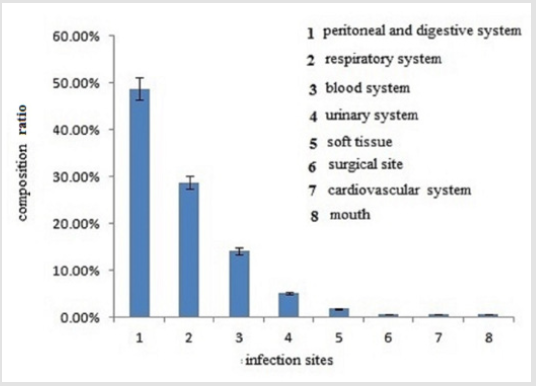 Table 1: Relationship between hospitalization day and nosocomial infection duration in inpatients from Jan 2005 to Dec 2016.

a) The correlation between total hospital stay and duration from admission to nosocomial infection by Spearman test, γ=0.733, p=0.000;

b) The correlation between total hospital stay and duration from surgery to nosocomial infection by Spearman test, γ=0.516, p=0.000. 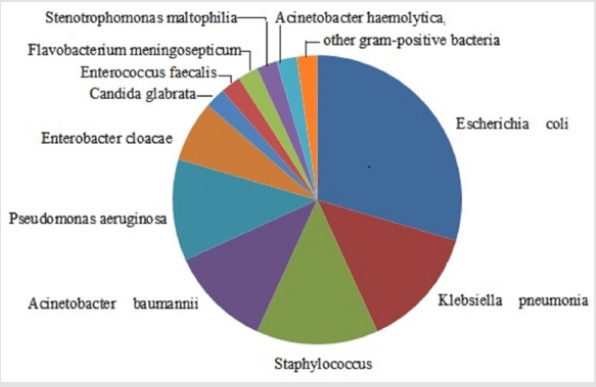 The nosocomial infection rate was different in PLC, liver metastasis from other primary malignant lesions, other vascular and biliary system-related diseases, maybe for patients diagnosed biliary system-related diseases such as biliary obstruction accepted operation for biliary drainage which occurred infection easily, and liver metastasis originated from other malignances had late clinical stage and more complicated symptoms than PLC. The present study showed that death between inpatients with and without infection had no significant difference. The above literatures and the results of this study (nosocomial infection rate 3.1%) showed that nosocomial infection percentages in PLC patients undergoing surgery, especially those who had local surgery, were lower than those without surgery [3,6-9]. The reason may be related to the need for better liver function in patients receiving surgery such as TACE, that is, mostly patients at Child-Pugh A or B stage.

In this study, inpatients with nosocomial infection were mostly PLC, and the sites of nosocomial infection were mostly peritoneum and digestive system, followed by respiratory system, blood system and urinary system. Although nosocomial infection occurred mostly in inpatients post-surgery (86.6%, 278/321patients), only 2 cases of nosocomial infection occurred in surgical site, suggesting that the sterile operation was performed strictly, and the surgery might influence the overall immune system and induce important organs infected. The cancer lesions treated with TACE may have ischemia, necrosis, and aseptic inflammation. That might induce exudation in biliary tract and gastrointestinal tract, prone to cause dysbacteriosis of the intestinal flora and bacterial translocation, which lead to susceptibility to peritoneal and digestive infections.

Postoperative embolism syndrome occurs frequently in PLC patients treated with TACE. At least 93.4% of patients had postoperative embolism after TACE, which manifested as fever, abdomen pain, vomiting, gastrointestinal responses and other symptoms [11]. In particular, the white blood cell counts, and the percent of neutrophils may rise. And not all cultivation of pathgen are positive in nosocomial infection (43/88 samples in the present study). So, it is difficult to differentiate peritonitis or gastrointestinal tract infection from embolism syndrome. Most patients with embolism syndrome may have self-limitation, or symptomatic treatment may relieve fever, pain and vomiting [12]. While the symptom associated with hospital infection requires antibiotic treatment. However, there have no powerful differential diagnosis criteria for nosocomial infection without positive pathogens, especially for peritonitis or gastrointestinal tract infection. To improve the liver function before surgery, strictly performed aseptic procedures in invasive procedures, and administrate microecological agents, these methods need more evidence to identify the effect on nosocomial infection.

However, the duration between the admission and surgical time was generally short, and postoperative nosocomial infections occurred in a few days. Therefore, outpatients should strengthen the immunity and improve the healthy before admission. Escherichia coli were ranked at the first or second in nosocomial infections and have multi-drug resistance. The occurrence of nosocomial infection induced by production of extended-spectrum β-lactamases (ESBLs) strains has increased, of which Escherichia coli and Klebsiella pneumonia (KP) induce multidrug-resistance [13]. In our hospital, more than 50% cases of KP were resistant to ofloxacin. The data was like Taiwan that 124 (52.8%) cases of ESBL-producing KP were resistant to ciprofloxacin [14]. The present study was showed Escherichia coli in blood and bile juice, as well as the report by Jiang Yongjun et al. [8]. The detection rates of Staphylococcus aureus, Klebsiella pneumoniae, and Acinetobacter baumannii with the increased drug resistance have also increased year by year [15].

Cephalosporins II has used usually for prevention of nosocomial infections. But above bacteria are not sensitive to the antibiotics Therefore, to investigate pathogens is very important prior to antibiotics administration.

Objective: To investigate the characteristics of nosocomial infection in a department of interventional vascular surgery (DIVS) treated with transcatheter arterial chemoembolization (TACE).

Methods: The incidence of nosocomial infection was retrospectively analyzed in inpatients from January 2006 to December 2015 in DIVS.