Human appendix is a finger-like pouch attached to the large intestine and located in the lower right area of the abdomen [1]. It is a hollow tube with mucous membrane, and a muscle similar to that of the caecum. It’s size and shape are quite variable, but generally about 9 cm long. It may turn up wards behind the caecum pointing out towards the groin-the retro-caecal position or it may lie on the front of the caecum immediately under the anterior abdominal wall [1]. The appendix does not function in digestion but like the tonsils, it contains numerous lymphatic nodules and its subject to inflammation a condition called appendicitis. This is commonly detected in its later stages by pain in the lower right quadrant of the abdomen. If the appendix ruptures, infectious material can spread throughout the surrounding body cavity, causing inflammation of the peritoneum (peritonitis). This dangerous event may be pre vented by surgical removal (appendectomy) of the inflamed appendix [1]. Appendicitis is caused by multifactorial reasons.

Fecal stasis and lymphoid hyperplasia are the most common causes of appendicitis whereas unusual causes of appendicitis are intestinal parasites and tumors. Parasites may sometime influence appendix. This situation can differ between an innocent reaction and an inflammatory response threatening life. A reported 250,000 appendectomies are performed annually with 15% result in removal of normal appendix. Around 4 -8% of the children are reported to be infected by parasite globally. Parasitic infections may cause symptoms mimicking acute appendicitis; however, their role in the causation of acute appendicitis remains speculative. Sporadic cases of appendicitis have been attributed to parasitic infections [2,3]. Parasitic infections are ubiquitous on a worldwide basis and are seen in high numbers in developing countries. The presence of parasite in the appendix may cause appendicecal colic even without eliciting acute inflammation. The presence of pin worm in the appendix has been shown to cause symptoms of appendicitis or appendicecal colic but frequently without any histological evidence of acute inflammation.

This colic due to parasitic infestation is explained by the hypothesis of appendicecal lumen obstruction [4]. The parasitic infestation is a leading cause of iron deficiency anemia, growth retardation, while heavy infestation with both round worm and whip worm causes protein energy malnutrition. Moreover, it can lead to intestinal obstruction in infested children [5]. Timely diagnosis and treatment with de-worming of the patients prevent probable future complications that may necessitate surgical procedure.

Sampling site. This study was conducted in Benghazi city. The city of Benghazi is situated between degree of latitude (32°10’N) and longitude (20°06’E). It is the second largest city in Libya occupying an area of approximately 240 km2. It is situated on the eastern southern coast of Mediterranean Sea north-east of Libya. The population of the entire district was 670,797 in the 2006 census.

Samples were collected from Al jalla hospital. This hospital is located in center of Benghazi and it is one of the biggest hospitals in the city. It is the main hospital of the most surgical operations done in east region of Libya. One hundred and seventy-five removed appendices were collected after appendectomy during the period from January to November 2012. These specimens were preserved in 10 % formalin in clean tubes. All specimens were labeled with the patient age, gender and date of operation.

Removed appendices were brought to the research laboratory in zoology Department for the process of examination, each appendix was opened longitudinally and placed in petri dish contains 0.85% saline solution. The contents were carefully examined under dissecting microscope for the presence of parasites and any foreign bodies. All encountered worms were counted, removed and preserved in 70% ethanol. Appendices contain stone or abnormal bodies were recorded as well. The contents of the appendices were also examined for micro -parasites (cyst- oocysts- eggs) by direct and indirect saline -iodine smears and formalin - ethyl acetate sedimentation technique then examined under microscope using low power (10x) and high-power objectives (40x,100x).

Chi-square x2/ was employed to find out the significance or non-significance of the relationships between age, gender, months and the presence or absence of the parasitic infections. Level of significant (p<0.025). t-test (p<0.025), also we used ANOVA with (p<0.05). All analysis was computed in windows environment of statistical of program (SPSS) version 17.

The highest prevalence of parasitic infection (75.9%) was recorded among individuals in the 10-19 years age category, followed by those of the 40-49- and 20-29-years age group (70.6%, 67.6 %) respectively. The lowest prevalence of parasitic infection (20.0 %) was observed among the individuals of age categories above 50 years as indicated in Table 2. Statistically, no significant difference was observed in the association between parasitic infection and age (X2 =6.958a, df=4, P=.138). The results presented in Table 3 shows the distribution of parasitic infections among gender (sex) in patients with appendicitis. 60(69.0%) females and 60(68.2%) males, indicating that both genders are equally susceptible to infection and the result showed no difference in the incidence of appendicitis between males and females (p=.821). Also there was no significant differences between the gender in relation to the presence of parasites.

Table 2: The presence of parasites in removed appendices according to age groups.

Table 3: Distribution of parasitic infections among gender (sex) in patients with appendicitis.

The results presented in Table 4 revealed that the peak incidence rate of appendicitis occurring during the months of May, June, July, 21.7%,27.4% and 21.7% respectively. Similar results also seen in relation to the presence of parasites in removed appendices. The rates were 17.1%, 20% and 16.6% in May, June, July respectively. Even that there were no significant differences between months and infection or disease (p>0.025). Out of the total removed appendicitis (175) twenty three appendices (13.1%) were found with abnormal growth and six (3.4%) were found with stones. In only one appendix (0.6%) there was stones and abnormal growth (Table 5). The results presented in Table 6 revealed that out of 23 abnormal growth appendices only five showed parasitic infection. On other hand five appendices were infected with parasites out of six showed presence of stones. And only one case with abnormal growth and stones was infected with parasites. There was a significant difference between the presence of abnormal growth or stones and incidence of parasitic infection. (p>0.025).

Table 4: Monthly incidence of appendicitis and the presence of parasites in the examined appendices.

Table 5: The percentages of abnormal growth and stones incident in relation to the presence of parasites in removed appendices.

Table 6: The percentages of abnormal growth and stones incident in relation to the presence of parasites in removed appendices.

The distribution of intestinal parasites detected in patient with appendices. shown in Figure 1. Of the total study population 80 (45.7% of 175 total removed appendices/ 66.7% of parasitic infected harbored at least one parasite while intestinal parasites were found in 22.9 % (40 of 175 ) and 33.3% of parasitic infected were infected with two or more parasites of the removed appendices, the result show that the a high significant (p=0.00). 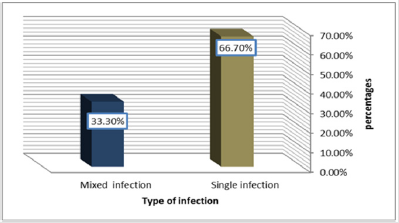 Figure 1: The percentages of single and mixed parasites recovered in the removed appendices. (n=120).

This is a pioneering study the relationships of parasites to appendicitis. The predisposing factors to appendicitis are thought to be multifactorial including mechanical obstruction, inadequate dietary fiber, family susceptibility and viral, parasitic pathogens [17]. The association between parasitic infection of the appendix and acute appendicitis has been widely investigated [18-,20]. The results of this study have indicated that 68% of removed appendices were infected with parasites. This finding is in agreement with many authors [21-24]. these authors reported the hypothesis that the parasites can cause appendicitis. In contrast many other authors do not agree with this hypothesis [25,26]. In the present study three pathogenic parasites were recovered these are E. histolytica, E.vermicularis and G.lamblia. The same parasites reported in removed appendices from different parts of the world [3,24].The results also showed the presence of Blastocystis hominis in removed appendices. This parasites consider by many as nonpathogenic [27,28].

On other hand there are many reports indicate that this parasites is a pathogenic [29]. There is only one report in literature associated Blastocystishominis with appendicitis by Pasupati [30]. from Malaysia which consistent with the results of this study. So, the role of B. hominisin appendicitis should not overlook. The present study showed that about 4.5% of the total removed appendices were infested with E.vermicularis. It is one of the most common nematode parasites of human which flourish in the temperate zone where probably every child has been infected than once more in early childhood. The percentage of E. vermicularisin this study is slightly higher than incidence reported by [26,31]. On other hand results of this study is lower than those reported by others [25,32] from Egypt and Iraq respectively. In general, the rate of E. vermicularis in the appendices range from 0.2% up to 48% worldwide. The role of E. vermicularisin association to appendicitis is controversial [20,33,34].

However, it is higher than those reported by other authors [25,32] were the rate of the E. histolytica/dispar ranges from 0.5% to 2.5% G.lambliais a common parasite of man , it has worldwide distribution, it was considered non pathogenic as it found in complete a symptomatic persons , However . There is now abundant evidence of pathogenic potential of Giardia [36]. The incidence rate of G. lambliain the present study 3.4% which is higher than incidence reported by Salihet [37] in Iraq. Other report in Iraq too by Abed-Al Rekabi [38] was higher than present study. Reviewing the literature no other reports on the association of G.lambliawith appendicitis . E. coli is a non-pathogenic parasite of human. The present study indicate that 24% of removed appendices were infested with this parasite which inconstant with the results reported by Pasupati [30]. Reviewing the literature no other reports on the association of E.coli with appendicitis.

The results of this study revealed that a higher percentage of patient who had parasites in their appendix fall within the 20-29 years old age group with 26% followed by age group 10-19 years and 30-40 years of age. This result in agreement with many reports [7,13]. Many researchers suggested that the age is a risk factor for both disease and parasitic infestation of appendix [3], while others denied the association [38]. The present study revealed that there was no significant difference between the incidence of appendicitis in males and females’ patients and also there was no difference in parasitic infestation in the appendices. This suggests that males and females are equally exposed to parasitic infection and gender may not necessarily be an important epidemiological determinant for appendicitis and parasites loads. This results in agreement the results reported by [34]. Other workers reported high incidence in males [7,17,24].

On other hand many authors found that females were more susceptible to disease [33]. These authors explained their results due to false diagnosis of appendicitis. The present study revealed that the highest incident of appendicitis and parasitic infestation occurred during summer months (May, June, July). similar results were reported by other authors [17,38]. The monthly variation may be explained by the increase of contaminated water and vegetable consumption during the hot weather.

This is pioneering study on the incidence of parasitic infection of appendices removed from patients in Al-jalla hospital, Benghazi city. Five intestinal parasites were recovered, namely Entamoebahistolytica, E. coli, G. lamblia, B.hominis and E. vermicularis. Sixty eight percent of examined appendices were infected with one or more parasites. The rate of these parasites will not be excluded , they may cause appendicitis or produce symptoms similar to that of appendicitis which may lead to false appendectomy. So, there is a need for treating the intestinal parasites before infecting the appendix. It will be worthwhile to continue the study of the prevalence and the causes of appendicitis in Libya which may give a comparative and comprehensive picture.