Abdominal wall hernias are one of the most common clinical conditions faced by general surgeons. They can occur in up to 28% of patients undergoing abdominal surgery, with studies indicating incisional hernias in at least 10% of all open abdominal surgical procedures [1-3]. In the United States, this translates to approximately 200,000 incisional hernia repairs performed annually [4] Incisional hernias result from the disruption of the abdominal myofascial anatomy during surgical intervention, which modifies the dynamic forces within the abdominal wall muscles [5] This creates a markedly increased lateral traction and midline shift which can further enhance the hernia. Thus, methods to reduce tension before and during surgical procedures have been researched and applied over the last decade. One of the novel methods is Botulinum Toxin A (BTA) injection to lateral abdominal musculature. BTA is a neurotoxic protein that predominantly inhibits release of acetylcholine endosomes at the pre-synaptic cholinergic nerve terminal. This temporarily blocks signal transmission in both motor and autonomic innervation, resulting in flaccid paralysis of skeletal muscles [6,7] The paralysis reaches its maximum effect approximately 4 weeks after BTA administration and decreases gradually after 2.5 months, persisting until 4-6 months after initial injection.

The agent also presents analgesic properties due to its capacity of blocking the release of pain mediator (substance P and calcitonin gene related peptide) endosomes. Since it was first approved by the FDA in 1989, BTA has been used to treat various medical conditions including: dystonia, spasticity, cerebral palsy, hyperhidrosis, hypersalivation, bladder dysfunction, and skin wrinkles [8,9] More recently, human and animal studies have tested BTA use perioperatively. The main goals were, among others: to decrease lateral traction before surgical hernia repair and postoperative pain [10,11]. Decreasing lateral tension is important especially when complex hernias are being treated. Complex hernias include hernias larger than 10 cm, patients presenting with loss of domain, and multiple comorbidities, among other criteria. 12 By allowing repair under less tension, injection of BTA is expected to decrease the rate of hernia recurrence. We sought to evaluate the efficacy of BTA injection pre operatively in patient planned to undergo an incisional hernia repair.

Patients were selected for preoperative BTA injection based on the following criteria: width of the hernia defect over 15 cm (Figure 1) and/or suspected loss of domain (Figure 2) with inability to achieve primary closure during hernia repair. 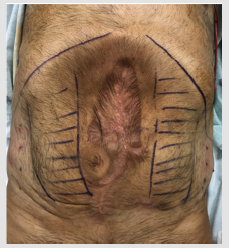 Figure 1: Image of patient with wide defect (17cm) without loss of domain with rectus identified and marked and injection points on the lateral muscles. 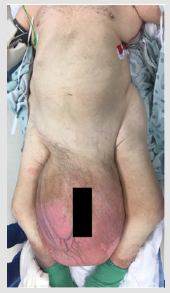 BTA Injection: Injection was performed by the operative surgeon with the patient in supine position under ultrasound guidance. Injection sites were marked lateral to the semilunaris line with 3 sites on the anterior axillary line and 2 at the mid axillary line, as described by Ibarra (Figure 3). The area was prepped and draped with sterile technique which was followed by injection of BTA under ultrasound guidance (Figure 4). The site of injection was the plane between the internal oblique and transverse muscles (Figure 5). 200 UI of BTA were diluted in 20cc of saline and 2cc (20 UI) were injected at each of the 10 injection sites. After the procedure, the patients were either discharged safely home or remained in-patient depending on their prior admission status. 3 out of 4 patients underwent simultaneous diagnostic laparoscopy; at which time they received intra-abdominal catheter insertion for progressive preoperative pneumoperitoneum due associated loss of domain. Following injection of BTA, patients were taken to the operating room to undergo planned repair of the hernia between 2 and 5 weeks. The maximum effect of paralysis from BTA is usually obtained around 4 weeks, but some effect may be seen after only a few days (Figure 6). 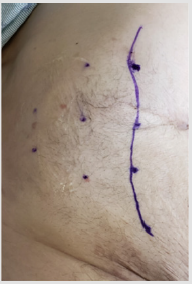 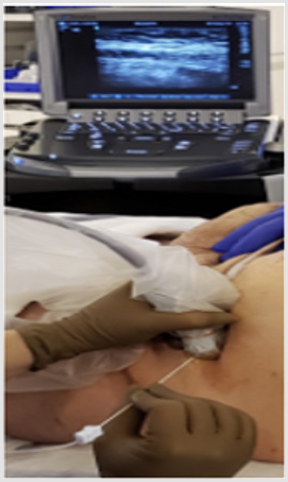 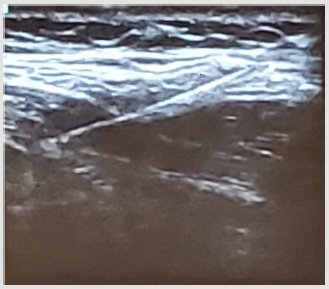 Figure 5: 20 U of BTA injected, on each site, between transverse abdominis and the internal oblique. 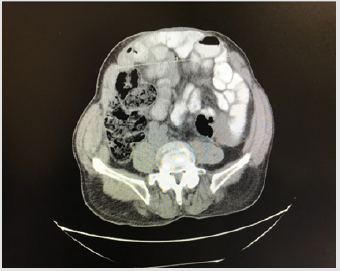 Figure 6A: 17 cm wide defect prior to BTA injection. 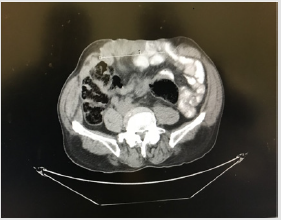 A surgical repair with primary closure of the midline and/ or defect was possible in all the patients without requiring the use of bridging mesh. The average operative time was 178 mins. All patients underwent repair with mesh placement in an onlay or sublay position. During hernia repair, 3 out of the 4 patients underwent simultaneous surgical procedures. Colostomy closure was performed in the same surgical event in one patient. Component Separation (CS) was performed in 2 out of 4 patients, but surprisingly, the widest defect (23cm) did not required CS to be closed. Length of stay of patients post procedurally was between 2-28 days. 1 out of 4 patients post-operative course was complicated by SSI and another presented with skin dehiscence at the panniculectomy incision. No injection related complications as hematoma or abscess were reported. No systemic effects of BTA were found (Table 1 & 2).

Traditionally, reconstructive techniques for large ventral hernias employed methods such as mesh bridging and component separation 13. Bridging has the drawback that the muscular function of the abdominal wall is not corrected as well as unacceptable recurrence rates. [14] Component Separation (CS), although effective, involves extensive tissue dissection. CS is has been shown to be associated with complications such as flap necrosis, wound infection, wound dehiscence, and hematoma and seroma formation [15-22]. Since Ibarra et al. [23] first description of this technique in 2009, various groups have studied the administration of BTA prior to abdominal wall hernia repair. Ibarra described a significant decrease in thickness and an increase in length of lateral abdominal wall muscles after the application of BTA. These muscular changes are the result of the muscle paralysis and regression of the contraction and lateral retraction process, which can be visualized by CT scan after 4 weeks of BT injection. Zielinski et al. [24] reported a retrospective review of their results of BT injection in patients treated with open abdomen after a damage control laparotomy. All patients were treated with negative pressure dressings for temporary abdominal closures until primary fascial closure was performed.

In 83% of these patients, within 24 hours of the initial open abdomen procedure, primary fascial closure was achieved, with a partial closure with absorbable mesh supported by 6%. The ideal objective is to perform a tension-free closure, with abdominal wall dynamic stability and optimized aesthetic appearance [25]. Besides been described as one of the techniques to achieve primary fascial closure in patients with complex incisional hernias with loss of domain, BTA administration is also associated with decreased morbidity of abdominal wall reconstruction by reducing the risk of compartment syndrome [26]. BTA has also been described in association with various techniques to similarly achieve primary closure of complex abdominal wall hernias as Preoperative Progressive Pneumoperitoneum (PPP) as initially described by Moreno [27], With PPP the abdominal cavity can be expanded allowing for reduction of large volume hernias as well as improving postoperative respiratory function. The increased abdominal cavity volume also reduces the risk of Abdominal Compartment Syndrome (ACS), the major problem in large incisional hernia repair [28,29] . The effects of PPP may be further complemented by BTA, as it appears it would even allow us to handle larger volumes of insufflation by relaxing the abdominal wall muscles temporarily. Elstner et al. [30], described a potential advantage of the combination PPP with BTA; the use of neurotoxin would allow an abbreviated duration of PPP, as the gradual stretching process of the abdominal wall is greatly accelerated by the preexisting flaccid paralysis of the lateral abdominal musculature.

BTA appears to be a safe and useful adjunct to achieve primary fascial closure in complex abdominal wall hernias. BTA can be considered to limit the need for bridging meshes and need for component separation. No complications were encountered with BTA injection and primary closure was achieved in all cases. Current literature, however, has significant limitations as most studies are retrospective case series of varying quality. As a promising adjunct or possibly pre-operative standard of care it is imperative that longterm high quality studies be conducted to for comparative cohort data on indication, application techniques, dosing, efficacy, safety, and costs. Consequently, objectively comparing BTA with similar potential pre-operative adjunctive therapies should also be the aim of future studies.

Abdominal wall hernias are one of the most common clinical conditions faced by general surgeons. They can occur in up to 28% of patients undergoing abdominal surgery, with studies indicating incisional hernias in at least 10% of all open abdominal surgical procedures [1-3].