Incidence of prostate cancer (PCa) is still increasing despite the multiple advancements in medical technology. One of the most promising treatment choices for the disease is proton beam therapy (PBT), a kind of radiation therapy, with a characteristic spread-out Bragg peak (SOBP). In spite of its beneficial outcomes, financial expenditures of undergoing PBT becomes a limitation for the procedure to be a principal treatment for prostate cancer. Recent amendments in the universal health care system in Japan has paved way for patients to now reconsider PBT for PCa, as well as for research opportunities with the goal of providing a better quality of life (QOL) for the patients

Cancer had been the leading cause of death in Japan since 1981, thus, the enactment of ‘Cancer Countermeasures Basic Law’ in 2007 to promote different treatment choices in combatting the disease. In year 2018, more than a decade after the legislation, over 400,000 mortality in Japan is still due to cancer. New cases per cancer site incidence showed colorectal as the most prevalent, followed by lung, stomach, prostate then breast [1]. This statistics continued to increase compared to the preceding years despite the advancements in medical technology. Today, one in two Japanese people is diagnosed with cancer and one out of three will die from the illness [2].

Prostate cancer (PCa) is the 3rd most common cancer in Japanese men following stomach and lung cancer [1]. In fact, about 1 in 9 men will be diagnosed with the disease during his lifetime. In the US, PCa is the most common cancer aside from skin cancer and second most common cause of death after lung cancer. Remarkable advances in the medical field had provided variety of treatment landscapes for prostate cancer from chemotherapy to surgery to radiation therapy (RT) [3].

Proton beam therapy (PBT) is a type of radiation therapy that offers a greater therapeutic effect and lesser adverse effects in comparison with the conventional RT that uses x-ray. Protons are positively charged particles which at high energy can be used to eradicate cancer cells. A synchrotron or cyclotron is utilized to accelerate the proton particles. Proton therapy has a characteristic spread-out Bragg peak, wherein protons precisely deliver energy within a pre-calculated depth of the tumor, then after a steep decline in dose allows PBT to expose less radiation outside of the tumor, hence, an outcome with better quality of life (QOL) for the patient [4]. In a conventional RT, continued radiation dose is delivered as it exits the body. This damages the nearby healthy tissues producing more prominent adverse effects [5]. These promising outcomes of PBT prompt institutions to build facilities for this kind of radiation therapy despite its costly equipment. Sixty-nine proton beam facilities are found worldwide wherein 14 are found in Japan, making the country the second with the most number of proton centers next to the US [6].

The large number of proton centers in Japan, along with its promising outcome, grants inclination of patients to consider treatment using proton beam therapy. However, surgery and chemotherapy are still the mainstay treatment in prostate cancer at the present. One significant factor for this is the financial expenditures of undergoing proton beam therapy. In 2016, health care assistance in pediatric patients who are undergoing PBT were granted by the government. Last April 2018, the Japanese National Health Insurance (NHI) legislated amendments on the coverage of proton beam therapy, which now includes head, neck and prostate cancer cases [7]. This modification aided individuals by reducing financial burden in patients eligible to be subjected to proton therapy. Hence, an increase in the number of patients using PBT as a principal treatment choice for PCa can be anticipated the years to come. Comparison in financial expenditures before and after NHI amendments are found in Table 1.

The universal health care insurance system of Japan or the Japanese National Health Insurance which is regulated by the government and managed by prefectures is profoundly substantial. All citizens are mandated to have health insurance except in some special cases (e.g. Individuals receiving public assistance). Patient’s copayments or out of the pocket medical expenses are about 20%, 30% or 10% of the total hospital bill depending whether he is/she is a pre-school infant, school age children/adults up to 69 years, or adults 70-74 years, whilst NHI pays the remaining portion [8]. Hence, the expansion of site coverage in proton beam therapy can immensely influence not only the treatment choice, but also the progress in research studies regarding PBT for PCa patients. 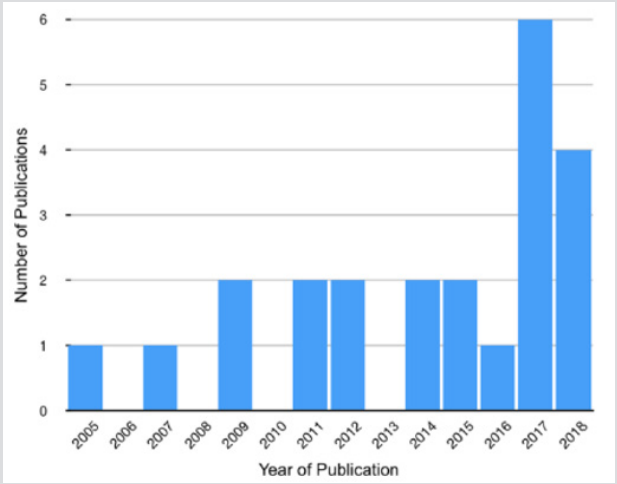 Figure 1: Number of publications of proton beam therapy for prostate cancer in Japan.

The graph shows the number of publications on PBT for prostate cancer per year beginning in 2005. From 2005-2016, published papers never exceeded two in one year. This was changed in 2017 when a total of 6 papers were publicized. Four articles were already published in the first half of 2018, thus, implying that the research studies in 2018 may exceed those of 2017. The increased publications in both years may be attributed to the amendments of universal health care in Japan, catering not only the upper class but the general public. Through these developments, the future of proton therapy may be inferred- a greater the number of prostate cancer patients undergoing proton beam therapy and researches regarding the procedure will further progress.

The Japanese National Health Institute reform to include other cancer sites such as head and neck, and prostate cancer in insurance coverage had been a great leap towards promoting proton beam therapy for prostate cancer given its promising outcomes. This effect had also paved way for research opportunities in hopes of providing the best choice of treatment in prostate cancer and better quality of life for the patients. 2018 had been a big year for Japan’s tourism, achieving record with over 30 million visitors [14]. The number of foreign visitors are expected to constantly increase as the country will host the Olympic Games in 2020. In line with this, medical tourists who require advanced medical care for diseases like cancer are also predicted to escalate. Surely, Japan is ought to become a driving force for medical tourism in Asia with its various proton beam centers that aims to provide the best quality care for patients.

My deepest gratitude is extended to my mentors in Hokkaido University- Prof. Kikuo Umegaki, Prof. Shinichi Shimizu, Assoc. Prof. Taeko Matsuura, Asst. Prof. Seishin Takao, Asst. Prof. Takaaki Fujii and Asst. Prof. Shusuke Hirayama for sharing their expertise in the field of proton beam therapy. To Takeshi Hoshina and Salvacion Hoshina for giving their full support for the completion of this paper.

Incidence of prostate cancer (PCa) is still increasing despite the multiple advancements in medical technology. One of the most promising treatment choices for the disease is proton beam therapy (PBT), a kind of radiation therapy, with a characteristic spread-out Bragg peak (SOBP). In spite of its beneficial outcomes, financial expenditures of undergoing PBT becomes a limitation for the procedure to be a principal treatment for prostate cancer. Recent amendments in the universal health care system in Japan has paved way for patients to now reconsider PBT for PCa, as well as for research opportunities with the goal of providing a better quality of life (QOL) for the patients.