2Department of Medical and Surgical Sciences, University of Foggia, Italy

Intraoperative Lung Ultrasound (ILU) is a novel ultrasound technique, developed for lung surface assessment during Video-Assisted Thoracoscopic Surgery (VATS) procedures. It has been developed considering ultrasound basic physics principles for images generation and interpretation. Most of the Transthoracic Ultrasound (TUS) findings are due to the high difference in acoustic impedance between the chest-wall structures and the air in the lungs. In this short communication, we compared ILU and TUS images in a normal lung, in Interstitial Lung Diseases (ILDs) and in lung nodules, highlighting how most of the TUS artifacts-based diagnostic algorithms should be reconsidered.

Transthoracic Ultrasound (TUS) is a well-established imaging technique, mainly used for pleural and subpleural diseases adherent to the 70% of pleural surface visible by ultrasound [1]. The TUS role in thoracentesis, in pleural drainage guidance and in US-guided pleural and subpleural lesions biopsies has been clearly established also in the British Thoracic Society (BTS) guidelines [2,3]. However, a deep knowledge of ultrasound basic physics principles and a proper training are crucial in order to avoid images misinterpretation [4]. Several Authors have described TUS (in their studies named “Lung Ultrasound”) as an “all-purpose” tool, that could assess the whole lung parenchyma and replace the conventional Chest X-rays, mainly thanks to artifacts [5]. The use of intraoperative ultrasound for lung nodules detection in VideoAssisted Thoracoscopic Surgery (VATS) has been investigated since the late 90’s [6]. Recently, other Authors assessed the use of a dedicated thoracoscopic convex probe [7]. Intraoperative Lung Ultrasound (ILU) is a completely novel technique; the scan is performed using a non-dedicated laparoscopic linear probe with a dedicated setting (7-12 MHz, gain less than 50%, electronic focus on the interface with the lung [8] (Figure 1c).

This technique was developed for a triportal VATS approach according to Hansen et al. [9] (Figure 1b), but it could be suitable also for uniportal VATS and Robotic-Assisted Thoracoscopic Surgery (RATS). The surgeon uses the two ports on the 8th and 7th intercostal space to scan the whole lung surface, checking on the screen the correct position of the probe (Figures 1a & 1d). In our research protocol we perform to all VATS patients both TUS and ILU (10). The TUS investigation was carried out using an ultrasound scanner “Esaote Twice” (Genova, Italy) with thoracic set up and with a convex probe (3.5-8 MHz) and a linear probe (8-12 MHz). A tissue harmonic focused on the pleural line was used, in an effort to reduce the natural artifacts, and the time gain compensation (TGC) under the 50% of the total gain. We started the exploration of each hemithorax with the patient in a sitting position from the back, with longitudinal and transversal intercostal and paravertebral scans, exploring from the base up to the ipsilateral posterior pulmonary apex, passing, then, to the examination of the lateral chest side along the posterior, middle and anterior axillary line. The anterior chest has been evaluated with midclavicular and parasternal scans. Videoclip of TUS scans were viewed by two expert sonographers, in a double-blind way; also, thoracic CT imaging were checked by two expert radiologist, in a double-blind way as well. In this short communication, we discuss the US semeiotics comparing TUS and ILU findings in normal lung, in Interstitial Lung Diseases (ILDs) and in lung nodules, interpreting the images according the ultrasound physics principles. 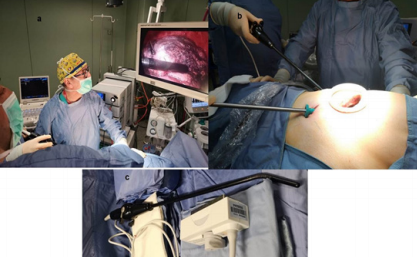 a. All the operators can check the position of the probe during the scans

c. A general laparoscopic linear probe is used for ILU

The first finding on TUS deeper than the chest wall is the hyperechoic pleural line (Figure 2b). This hyperechoic line does not represent the real anatomic pleural space. Indeed, the visceral and the parietal pleurae together are no more than 0.15-0.2 millimetres (mm) thick, while the hyperechoic pleural line thickness is usually 1.8-2.8 mm if measured with a convex probe, less than 1.6 mm with a linear high frequency probe [1]. This line is mainly due to the high acoustic impedance difference between the chest wall and the air in the lungs, that causes the almost complete (96%) reflection of the ultrasound beam. Ultrasound scanner machines are calibrated at a homogeneous and constant sound speed of approximately 1540 m/sec. However, the propagation speed of ultrasound in the lung is approximately 440 m/s. This interaction leads to artifacts generation, i.e. horizontal reverberations artifacts (A-lines) and the ring-down artifacts (namely B-lines). In particular, the ring-down artifacts are due to the interaction between even a small amount of liquid and the air [11,12]; indeed, they are also evident in abdominal ultrasound and in the post-pneumonectomy space [1]. B-lines are evident also in normal lungs, especially at the bases, where the hydrostatic pressure gives a more fluid-rich interstitium (1). Their generation is also reduced, but not abolished, by a correct machine setting, i.e. for TUS frequency 5-5.5 or higher for a convex probe; total gain set to less than 50%; tissue harmonics on; electronic focus on hyperechoic pleural line. All kinds of artifacts are not present in ILU in a normal lung, but the only finding is a hyperechoic line, due to the interface between the US beam, the saline solution and the lung parenchyma (Figures 2d & 2e).

Figure 3: a) a CT axial scan image and b) an TUS scan with convex probe ( 5 MHz) of a patient with pulmonary micro nodule in the posterior basal segment of the right lung (white arrow); c and d) ILU (intraoperative linear probe) showing an hypoechoic structure and well delimited margins of the left micro nodule (white arrow).

Several authors studied a possible role of B-lines in the early detection of ILDs, especially when associated with autoimmune disorders [13,14]. The generation of ring-down artifacts is dependent on several factors, including the interaction between the chest wall, the air in the lung and even a small, non-detectable, pleural effusion [1,12]. The machine setting, the kind of probe used (i.e. convex, linear or phased-array) and the frequency strongly influence the generation and the number of rings down (or B-lines) artifacts [1,11]. We performed ILU in patients with Systemic Sclerosis-related ILD, Usual Interstitial Pneumonia (UIP) Chest-Computed Tomography (CT) pattern and Non-Specific Interstitial Pneumonia (NSIP) CT pattern [8]. The main finding is an increased thickness of the interface between the probe and the lung parenchyma, with no artifacts beyond it (Figure 2d & 2e). The ILU images highlight and confirm that ILDs should not be suspected by TUS B-lines count, as also stated previously [15,16]. On the other hand, the increased thickness of the hyperechoic pleural line should be considered as a “ringing bell” for ILD and lead the physician to ask for a chest HRCT scan [17].

VATS approach is the gold standard for both wedge and anatomical lung resections [18]. Nevertheless, lung nodules detection could be challenging in VATS, because palpation is clearly impaired by the reduced length of the incisions (19). The role of ultrasound in nodules localization has been analysed also in a review by Lesser G et al. (20), but none of the techniques described employs a general laparoscopic linear probe and there is no reference about the correct machine setting. The ILU technique, using a high-frequency linear probe (12 MHz), allows a clear margin definition and the detection of also non-palpable nodules. Moreover, we found that, as in TUS, there is no echostructural specific pattern for benign or malignant lesions [21].

TUS is a rapid, safe, low cost, easy to use and and feasible imaging technique. On the other hand, the applications of ILU will broaden shortly. We described the US semeiotics of various lung disorders assessed with ILU and TUS. The comparison between TUS and ILU highlights how a deep knowledge of ultrasound basic physics principles is crucial for images interpretation.

2Department of Medical and Surgical Sciences, University of Foggia, Italy

Intraoperative Lung Ultrasound (ILU) is a novel ultrasound technique, developed for lung surface assessment during Video-Assisted Thoracoscopic Surgery (VATS) procedures. It has been developed considering ultrasound basic physics principles for images generation and interpretation. Most of the Transthoracic Ultrasound (TUS) findings are due to the high difference in acoustic impedance between the chest-wall structures and the air in the lungs. In this short communication, we compared ILU and TUS images in a normal lung, in Interstitial Lung Diseases (ILDs) and in lung nodules, highlighting how most of the TUS artifacts-based diagnostic algorithms should be reconsidered.