Introduction: As social media is commonly used among adolescents in recent years, new form of bullying, cyberbullying has been reported increasing. This study examined the association between being cyberbullied and emotional-behavioral problems using self-reported data.

Methods: A total of 4372 participants, aged from 13 to 18 years (mean age 15.20 ± 1.66 years) completed self-report web-based questionnaires through the Thai Youth Risk Behavior Survey. The Youth Self-Report was obtained from participants to assess emotional and behavioral problems.

Conclusion: Findings suggest that victims of cyberbullying with or without school bullying may be at a high risk of poor emotional-behavioral functioning. There is a need for intervention programs helping adolescents who suffer from being cyberbullied.

As social media is commonly used among adolescents and has influenced their social interaction in recent years. Digital social media, especially mobile technologies, enable adolescents to explore relationships and communicate with each other without adult control. Conflicts between them can be easily staged since everybody can be reached at any time. Therefore, involvement in conflicts and bullying might be dependent on how adolescents use aggression online, a phenomenon known as cyberbullying. Cyberbullying is described as an aggressive, intentional act or behavior that is performed by an individual or a group, using electronic forms of contact, repeatedly and over time against a victim who cannot easily defend himself/herself [1-4]. It can occur through e-mails, Facebook, Twitter, text messaging, or other social networks. The number of adolescents who experience cyberbullying varies, ranging from 6.5% to 34.5% [5,6], depending on the age group, study setting and how cyberbullying is defined. The bullying messages can spread through the Internet to many other people at school or in the community, making this type of bullying very embarrassing.

The negative effects of traditional or school bullying victimization on adolescents’ emotional and behavioral problems are well documented [7,8]. Previous studies have shown that, similar to school bullying, cyberbullying can have adverse effects on victims [3,9,10]. Victims of cyberbullying are more likely to achieve lower grades and report other academic problems as a result of the experience [11]. Being cyberbullied is associated with higher levels of psychological distress and depression and lower self-esteem [2,12,13]. A meta-analysis found that victims of cyberbullying were at higher risk of both suicidal ideation and suicide attempts [14] whereas another study has found that cyberbullying was associated with moderate to severe depressive symptoms, substance use, and suicide attempts [5]. Furthermore, experience of cyberbullying in adolescence may be associated with later mental health problems extending into adulthood [15]. Therefore, this study aimed to study emotional and behavioral problems specifically in cyberbullied adolescents and the associations between being cyberbullied and depression and suicidal ideas. Factors predicting behavioral problems were also assessed.

A cross-sectional survey of adolescents aged 13 to 18 years in a city in Northern Thailand was conducted. The data were collected using a two-stage stratified cluster sampling method from secondary and vocational schools. Parents were advised through school teachers that their child’s school had been invited to take part and that their child would decide whether or not to participate. Participants gave consent before completing webbased questionnaires which was responded to anonymously. Details of survey and participants are described elsewhere [16]. The Research Ethics Committee of Chiang Mai University approved the study.

The participants, both with and without cyberbullied experience, were asked to complete the Youth Self-Report form (YSR). The YSR is a self-administered survey and has been used widely to assess emotional and behavioral problems that have occurred within the past 6 months and are available in many languages [18,19]. It assesses internalizing (i.e., anxiety, depression and somatic complaints) and externalizing (i.e., aggressive, noncompliant) behaviors. The scale comprises internalizing, externalizing, and total behavior problems scores. It is divided into 8 subsets including anxiety/depression, social withdrawal, somatic complaints, social problems, thought problems, attention problems, delinquent, and aggressive behaviors. Higher scores indicate more problems. 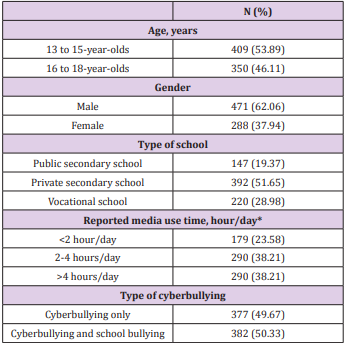 Table 1: Characteristics of participants who reported experience of being cyberbullied (n=759).

*Media use time other than school work or watching TV 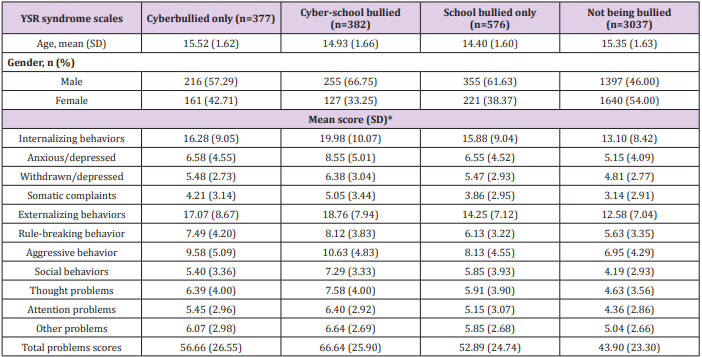 Table 2: Youth Self-Report scales in adolescents who were and were not cyberbullied (n= 4372).

*Adjusted for age, gender and type of school

Findings from this study have revealed that adolescents who reported being cyberbullied or school bullied or both had significantly greater internalizing, externalizing, and total behavioral scores than those who were not being bullied. Subscales of behavioral scores were also higher in adolescents who reported experience of being cyberbullied. Because cyberbullying messages can quickly spread through the Internet to many other people at school or in the community, this causes emotional problems including depression, embarrassment, or anger towards perpetrators who are able to be anonymous. Cyberbullying may achieve a vastly wider audience than traditional school bullying, since it occurs in the virtual space and, additionally, it has the potential to remain permanently on a website. The hurtful messages of a cyberbully can reach the adolescents anytime he or she uses a telephone or computer. Highest behavioral scores were reported by participants with experience of cyber-school bullying. This is consistent with the study which found that people who were exposed to cyberbullying in addition to traditional bullying displayed a significantly greater severity of psychiatric symptoms [20].

Being cyberbullied was found to be associated with reports of depression, suicidal ideation, and suicidal attempt at rates of 2.77, 3.92, and 3.46 times respectively, compared with those who were not being bullied. These findings were also consistent with previous meta-analysis which found that cyberbullying was more strongly related to suicidal ideation (OR, 3.12) compared to the impact of traditional bullying (OR, 2.16; 95% CI, 2.05–2.28) [14]. Another study found that being cyberbullied was strongly associated with suicide attempts (OR, 3.22) [21]. However, there have been reports that most of the victims were not psychologically affected by the cyber-attack and did not share the event with anyone [22].

The prevalence of cyberbullying victims was 17.36%, whereas those who were school bullied were 21.91%. Among those who reported experiences of being cyberbullied, 62% were males and 38% were females and the experience was more common in private school students. These findings were different from a study which found that 9.1% of students grade 6-12 reported cyberbullying, of which 39% were male [23]. Boys were reported as being more likely to be cyber perpetrators, whereas girls were reported to be more likely to be cyber victims [24]. From a systematic review, the prevalence rates of cyberbullying victimization in US adolescents of middle and high school age ranged from 3 to 72%. This study found co-occurring cyberbullying and school bullying of 8.74% which is different from another study which reported the overlapping of cyberbullying and other types of bullying of which only 4.6% of adolescents grade 9-12 reported being only cyberbullied [25]. In another study 62% of high school students experienced cyberbullying, the main channel for the bullying being by cell phone, the highest frequency occurring in public school students [22].

The age of participants, gender and being cyberbullied as well as school bullied were associated with internalizing, externalizing, and total behavioral problems. Females were more highly associated with internalizing behavior problems whereas males were more frequently associated with externalizing behavior problems. This is consistent with the study by Kim et al. [23] who found that cyberbullying was associated more strongly with emotional problems in female adolescents and with behavioral problems in male adolescents [23]. In another study, girls and boys were found to differ not only according to their online communication use but also in their cyberbullying involvement. Girls had more intensive online social activities whereas boys had higher exposure to antisocial media content predictive of higher levels of victimization over time [26].

In this study a representative sample of participants in the city were enrolled and the web-based anonymous questionnaires increased the level of confidentiality for the adolescents enabling accurate and useful data to be obtained. The Youth Self-Report, a verified analytical tool, was used to assess emotional and behavioral problems. However, some limitations need to be addressed. Firstly, the cross-sectional nature of this study limited the ability to explore the cause and effects of the findings for example why there was a high prevalence of cyberbullying in public schools. A longer term, more in-depth study may provide more information. Secondly, the data were self-reported, and although the responses were anonymous encouraging honesty in the answer, multi information gathering strategies would provide more details concerning emotional-behavioral functioning. Thirdly, participants were from secondary and vocational schools in a city in Northern Thailand, so the findings could not be generalized. Also, adolescents 13-18 years of age who had dropped out of school were not included in this study. Lastly, details of cyberbullying were not explored such as being bullied only or being both the bully and perpetrator. Type of online aggression and how the young people deal with bullying should be examined so that intervention could be provided appropriately.

This study was supported by Faculty of Medicine, Chiang Mai University (Code number 453/2515). The authors would like to acknowledge Associate Professor Sarita Teerawatsakul from the Department of Epidemiology, for helping us with the study sample stratification. We would also thank the teachers and students from the six schools in Chiang Mai for their contribution and participation to this study.

Introduction: As social media is commonly used among adolescents in recent years, new form of bullying, cyberbullying has been reported increasing. This study examined the association between being cyberbullied and emotional-behavioral problems using self-reported data.

Methods: A total of 4372 participants, aged from 13 to 18 years (mean age 15.20 ± 1.66 years) completed self-report web-based questionnaires through the Thai Youth Risk Behavior Survey. The Youth Self-Report was obtained from participants to assess emotional and behavioral problems.

Conclusion: Findings suggest that victims of cyberbullying with or without school bullying may be at a high risk of poor emotional-behavioral functioning. There is a need for intervention programs helping adolescents who suffer from being cyberbullied.