The fluxional nature or so-called pseudorotation of cyclopentane has well been documented. Conformational dynamics in this molecule is so fast, that’s even hard to populate one conformational form, in temperatures as low as -100oC or 263 K. cisOctahydropentalene contains two such fluxional molecule fused together. The molecule is not as rigid as its trans isomer, rather it’s mobile and fluxional at both ends and rigid at the fused carbons. While rigid trans-decalin is known to occur in lipid bilayer to exert rigidity where its desired, cis-Octahydropentalene occurs in some natural products. Partial mobility of cis-Octahydropentalene can have profound effect on the function and biomedical properties of these natural products.

The first complete pseudorotational model for conformational analysis of cyclopentane was introduced by Lipnick et al. [1] They Provided a wheel model of a cast of 20 conformers, arranged in a conformational wheel [2,3] to describe cyclopentane conformational flippings. Further attempts [4-12] to separate these conformers based on either energy or vibrational patterns mostly proved unsuccessful. Some 37 years later Laane et al. [7], provided a precise energy for twist and bent conformers [13,14] showing how close the two conformers are in energy and vibrations. The concept of a spherical conformational landscape was introduced by our group back in 2016, to cyclopentane and some of its derivatives which helped fully explain their fluxional nature, confirmed by 1100-1600 cm-1 region of their Raman spectra. A first-attempt spherical conformational landscape was also presented for cis-octahydropentalene. In this paper we try to analyze the conformational preferences of Cis-Octahydropentalene in some natural products containing this fascinating molecule. Whether the mobility of this fused five membered ring system is of crucial importance to bioactivity of theses natural products is yet to be determined.

To study conformational Dynamics in cyclic molecules, most local density functional methods, slightly over estimate the barriers mostly due to their inability to account for van der Waals attractions in twist conformations [15,16] While some density functional methods, in particular xb97xd, yield results that are both comparable and similar to those obtained by correlational methods like MP2. The ωb97xd (used here) can reliably result in accurate van der Waals considerations. The geometries computations were done at ωb97xd/6-311+G(d) level [17-19], using Gaussian g09 package [18]. Larger basis sets like 6-311+G(d,p) proved no better accuracy. In fact, the cc-pVTZ basis sets were slightly better, some basic conformers and those with methyls were in some cases studied with cc-pVTZ basis set [19].

Cis-Octahydropentalene is not only the most stable form but is rather a mobile molecule. There are 13 double envelope forms, 8 envelope half-chair forms and 2 double half-chair forms as well. In order to categorize and recognize better we’ll look all the cis conformers in a direction that Hydrogens are in the back of the plane shown. Out of plane atom in the envelope forms are shown with a sign if coming toward us and with if protruding away. Out of plane carbons for half-chairs are shown the same way but not circled and in plane carbons are designated with a bold line. Energies and representative drawings are included here Figure 1, Table 1. This will help one classify and recognize all possible conformers of Octahydropentalene from simple 2-D drawings. Double envelope forms are the most stable conformers and among them there are four interesting C2 symmetric cousins of cis-decalin. Half-chair conformers lie between 4.5 to 6 kcal/mol higher than the double envelopes while cHCHC1 is 2.5 kcal/mol higher, and the other double half-chair is about 6.8 kcal/mol higher than the reference cEE3 conformer 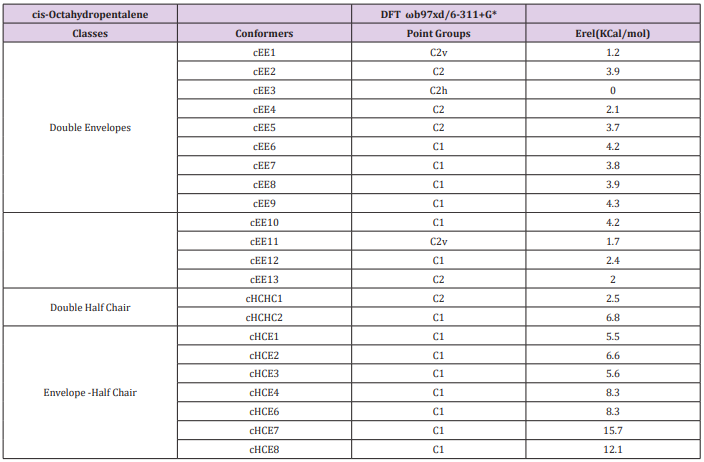 The big picture might be a little messy, but there are two distinct groups of conformers that show a full cycle of pseudo rotation. Clearly cEE1, 12, 12*, 7, 7* and cEE3, 9, 9*, 13, 13* can have a rapid full cycle conversion in the two separate platform Ea and Eb respectively. Conformers can switch between these two platforms via cHCE5 from cEE13, 13* to cEE12, 12*. The main role is played by conformer cEE1 and cEE3 in platforms Ea and Eb respectively. The cEE2 and cEE5 are the only isolated double envelopes, which are accessible only through half-chair forms and they share a similar structural feature. They both have their out of plane carbons as the junction carbons, and this serve as a lock to any flipping by the mechanism explained so far. Cis-Octahydropentalenes not only more stable than their trans isomers but also are of more frequent occurrences in nature. Cedrol, Meldrum’s acid, Aburtubolactam, (-)- -Cederene and (+)- -Cederene to mention a few have all a cis octahydropentalene skeletal substructure. Natural cedrol and Cederenes are the essential components in cedar oils in most coniferous trees.

They are used as fragrance in sprays, perfumes and also as antibacterial agents and fungicides. Aburtubolactam is a novel inhibitor of superoxide anions isolated from a marine organism. The above mentioned Cedrols and Cedrernes are all metabolized from a carbocation intermediate with a major conformational Preference for cHCHC1, and upon conversion to terpenoid alcohols and olefins assume cEE4 conformational form in equilibrium with a minor conformer, cEE3. The cEE3 Conformer looks quiet magical cause it’s a major conformer and might be the one with higher biomedical activity. Figure 2 summarizes all the above-mentioned conformational preferences seen in these natural products.

Figure 2: Conformational Preferences in olefinic and oxygenated sesquiterpenes, Cedrenes and Cedrols (Convention used to show the stereochemistry of the rings is the same used in Figure 1).

In summery it’s been shown that a full conformational analysis of cyclopantane helps explain the intricate mechanism of interconversion between Envelope and half chair conformers. The same rationale were then extended to the case of fused five membered rings , Octahydropentalenes, were a newly proposed convention of their 2-D drawings help one classify all possible conformers. Here the nature of fusion imposed restrictions on mobility of the fused ring and some conformers are of higher energy content and thus not readily accessible. While the fusion imposed severe restriction on trans-octahydropentalene it cannot oppose the fluxionl nature in cis-Octahydropentalene, which leaves molecule rather mobile. Conformational studies are yet to be done in much more details for medium sized and larger ring molecules. Conformational analysis on big Macrolide are making it possible to track dominant conformational form and their role on bioactivity. Such an analysis would be the most valuable tool ever, to fuel the drug design and biomedical research.

The fluxional nature or so-called pseudorotation of cyclopentane has well been documented. Conformational dynamics in this molecule is so fast, that’s even hard to populate one conformational form, in temperatures as low as -100oC or 263 K. cisOctahydropentalene contains two such fluxional molecule fused together. The molecule is not as rigid as its trans isomer, rather it’s mobile and fluxional at both ends and rigid at the fused carbons. While rigid trans-decalin is known to occur in lipid bilayer to exert rigidity where its desired, cis-Octahydropentalene occurs in some natural products. Partial mobility of cis-Octahydropentalene can have profound effect on the function and biomedical properties of these natural products.