Abiotic stress, such as water deficit, is one of the most devastating factors hindering sustainable agricultural crop output today. Plants use their own defensive strategies to cope with the harmful effects of this stress. Silicon is generally considered as a significant element for the growth, development and biomass/ yield production of plants, especially for those grown under stressful environmental conditions. This study was conducted to assess the impact of Si on antioxidant and phytohormones of sugarcane during water deficit. Experiment arranged as a completely randomized block design (CRBD), was used to examine the effects of two irrigation levels (mild - 75 and severe stress - 30% of FC and six silicon concentrations consisting of 0, 194, 387, 581, 774 and 968mg Si kg-1 soil. Calcium metasilicate (CaO.SiO2 ) was used as a source of silicon. CaO.SiO2 addition also enhanced the activities of catalase, peroxidase, superoxide dismutase and phytohormones according to stress intensity and Si doses. The exogenous silicon plays a key role to tolerate water deficit in antioxidant enzymes base, thereby improving overall development and productivity. The results suggest that sugarcane cultivar GT42 is more tolerant to water deficit conditions because of more efficient antioxidant system.

Most of the environmental variables drastically changed to the development of plants [1]. Among abiotic threats, water deficit is one of the special concerns. Water scarcity is a worldwide problem, and thus attracted more attention of the international scientific communities. It is most common in tropical and sub-tropical regions all over the globe and responsible for substantial decline in agricultural crop production. Also, water deficit is one of the most common stress responsible for the changes in morphological, physiological and metabolic activities of plants [2]. Changes in global climatic pattern has similarly escalate the time and period of various environmental factors, i.e. water deficit and maximum intensity of heat, with considerable yield loss in various plants [3]. Sugarcane plant tillering and major growth phages were critical stages of water sensitivity due to demand more water for sustainable plant growth [4]. Silicon (Si) serves as bioactive significant element for agriculture farming. The unlimited benefits of Si to agricultural crops are now well identified [5,6]. Silicon (28.8% of dry mass basis) is a main constituent of the Earth’s crust following O2 [2,7].

As early as the 19th century the significant impact of Si was apparent to plant biologists. At present many scientific experiments have demonstrated that Si exhibits extraordinary benefits on plant developing stage unequalled by any other non-essential element [8]. Although the importance of this element to crop plants is still debated, there have been significant benefits for plants [9]. Additionally, awareness of the significant effects of supplementing plants with Si as a soluble form has evolved considerably [6]. Experiment into the effects of Si on plant resistance to environmental stresses such as biotic [10-12] and abiotic [13] stress has approved the findings of the responses of Si on physiological, molecular and ecological base [13-15]. In this research area is apparent in the number of recent scientific reports published on the mitigation of stress by the use of silicon [2,8,13,16-19].

In next coming era, there has been a great demand for bioenergy sources to replace fossil fuels [20]. Sugarcane (Saccharum spp.) is one of the economically important in the world for sugar and bioenergy production [21]. Sugarcane requires favorable environmental variables. Ensuring this water demand under field conditions has been a serious problem since mostly agricultural cultivated land areas suffering from seasonal stress [22]. Plant chemical changes, accumulation of compatible solutes and upregulate antioxidant enzyme activities have been observed as mechanisms or functions that allow plants to avoidance the decrease of water potential in soil [23,24]. The importance of antioxidant defense systems has been shown during water deficit conditions [20]. The objective of this experiment was to assess the water deficit tolerant mechanisms on antioxidant and plant hormones activities in sugarcane, therefore revealing the impact of silicon in the mitigation of stress hazards and enhancement of antioxidant enzymes and phytohormones.

At 75-days after transplanting, thinning was performed, and two plants that exhibited the best well developed were selected. Soil moisture percent was measured by soil moisture meter (TDZ, Top Instruments Co. Ltd., Zhejiang, China). The weather parameters were recorded inside the greenhouse during experiment (Figure 1; Table 1). Sugarcane plantlets were submitted (Table 2) to the following: 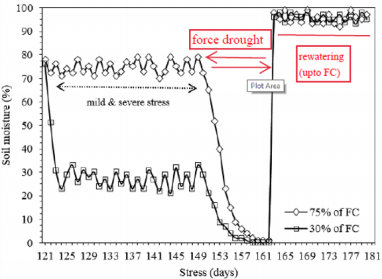 Samples of the middle third +1 of the leaf was collected midday at 18-days after rewatering. After washing and drying, immediately frozen in liquid nitrogen and stored at -80°C until analysis.

Frozen samples were homogenized (2:1 buffer v/w) in a mortar with a pestle with 100 mM potassium phosphate buffer (pH 7.5) containing 1 mM EDTA, 3 mM DL-dithiothreitol and 5% (w/v) insoluble polyvinylpyrrolidone. The homogenate was centrifuged at 1000 g for 30 min and the supernatant was stored at -80°C, prior to analysis. To determine the catalase activity [26], the samples were maintained at 4°C. The reaction was quantified using an UV-spectrophotometer for 1 min at 240 nm. The reaction medium contained 50 mM phosphate buffer (pH 7.8), 10 mM H2O2 and 20 µL of the extract. The peroxidase activity was determined according to Nakano and Asada [27]. The reaction mixture used in the analysis consisted of 50 mM TFK buffer (pH 7.5), 0.1 mM H2O2, 0.5 mM sodium ascorbate and 25 µL enzyme extract. Record changes in absorbance of the reaction solution at 290 nm, every 15 s for 1 min. The method described by Giannopolitis and Ries [28] with some modifications was used for the determination of SOD activity. The reaction medium contained (50 mM TFK, pH 7.8), 13 mM methionine, 75 µM nitro blue tetrazolium, 0.1 mM EDTA, 2.0 µM riboflavin and deionised water with 20 µL enzyme extract. One unit of SOD activity was defined as the amount of enzyme required to cause 50% inhibition of NBT photoreduction quantified at 560 nm by UV-spectrophotometer.

1.0 g leaf samples were ground with an ice chilled mortar and pestle in 5 mL of methanol (80% v/v) extraction containing 1mM butylated hydroxytoluene as an antioxidant. The homogenate was kept for 12 h (4°C), centrifuged at 10,000 g (20 min), and the supernatant was collected. The contents of abscisic acid (ABA), indole-3-acetic acid (IAA) and gibberellins (GA3 ) were determined according to Yang et al. (2001). Silicon content was determined according to Wang [29] with slightly modifications. The fresh leaves were collected, washed and dried up to constant weight. 0.2 g of crushed leaves from each treatment was digested, using 7 mL of oxidizing solution (HNO3 - 6 mL and H2O2-30%, v/v, 1 mL) for 30 min (150°C for 10 and 180°C for 20 min). The digested samples were diluted with de-ionized water to final volume (100 mL) prior to analysis. The Si content was quantified by inductivity coupled plasma-optical emission spectroscopy, calibrated using standard solution.

Variation in climatic parameters was recorded during study (Table 1). Air temperature and humidity inside the greenhouse were higher as compare to outside, respectively. With respect to these findings, proline content was found significantly higher in drought with Si as compare to stress without silicon. The higher proline content was increased upto 56.4% (75% of FC+774 mg Si) and 76.7% (30% of FC+581 mg Si) as compare to 75 and 30% of FC to free from Si amendment. The increasing trend was found in both stress situations with silicon. The content of proline further upregulated with Si application (Table 3). Proline, a universal osmoprotectant, acts as both an antioxidant and source of energy [30]. Proline is widely distributed in plants and accumulated in more as compared to the other amino acids in stressed plants. The higher proline contents are the main function of the tolerance mechanisms to drought [31]. Similar findings reported in sunflower [32] and potato crops [33]. 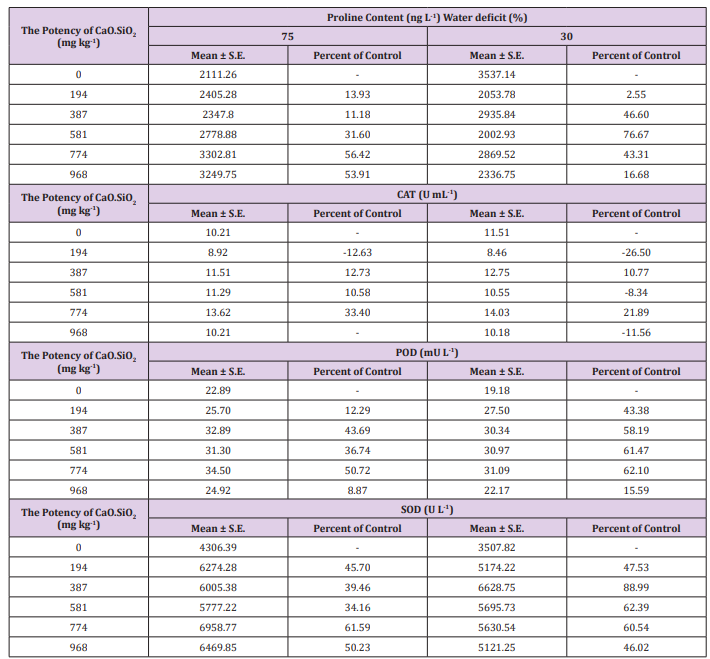 Effects of Silicon on the Activities of Antioxidative Enzymes

The activities of CAT, POD and SOD are given in Table 3. The variation of CAT activity was found in 75 and 30% of FC according to increasing levels of silicon. However, plants exposed to Si showed to significant upregulate as compare to without silicon in both stresses. In silicon treatment, CAT activity was found highest increment ca. 33 and 22%. With the progressing leaf development, catalase activity was also increased as relation to free from Si application. As per Table 3, the enhanced activity of POD was under mild and severe stress with Si treated plants in both conditions. Compared to the stress without Si element, POD activity was found significantly increased up to 50.7 and 62.1% under 75 and 30% of FC with 774 mg Si, respectively. Although stress caused an increase in the activity of SOD, it was higher in Si with mild and severe stress treatment as compare to without Si. Compared to 75 and 30% of FC, application of Si caused an increase such as 34.1 - 61.6 and 46.0 - 88.9%.

Adaptation to water deficit may depend on various functions, including the capacity to maintain high levels of antioxidants and/ or through the induction of antioxidant enzyme activities. In this experiment, the CAT, POD and SOD enzymes were increased in the sugarcane plant leaves under stress, while such an upregulate was more beneficial and consistent in silicon application as compare to others. Similar results were reported in wheat crop [34]. However, the application of Si mitigates these harmful effects on plant development by up-regulating the antioxidant enzyme activities [35]. The reduction of oxidative damage through reduced production of reactive oxygen species and/ or enhanced activity of antioxidant metabolism appears to play major role in Si-induced abiotic stress mitigation [2,36-38].

Effects of Si on Phytohormones

Impact of silicon on endogenous plant hormones are commonly assessed in response to stress situation. Our results showed that the activity of plant hormones such as abscisic acid (ABA), indole3-acetic acid (IAA) and gibberellic acid (GA3 ) were marginally increased and/or decreased in water deficit with silicon as compare to free from silicon (Table 4). The impact of exogenous silicon applied on endogenous phytohormone and their link to stimulatory Si effects on plants has received little attention to till date, and only few scientific reports have been published. In the study performed by Pei [39] also reported that Si enhanced abscisic acid in wheat cultivar during drought condition. These phytohormones, as studies generally indicate, serve to reinforce a plant’s capability to hold up against stresses [40,41]. Silicon element may enhance the plant tolerance to water stress by adjusting the levels of plant hormones [42,43]. 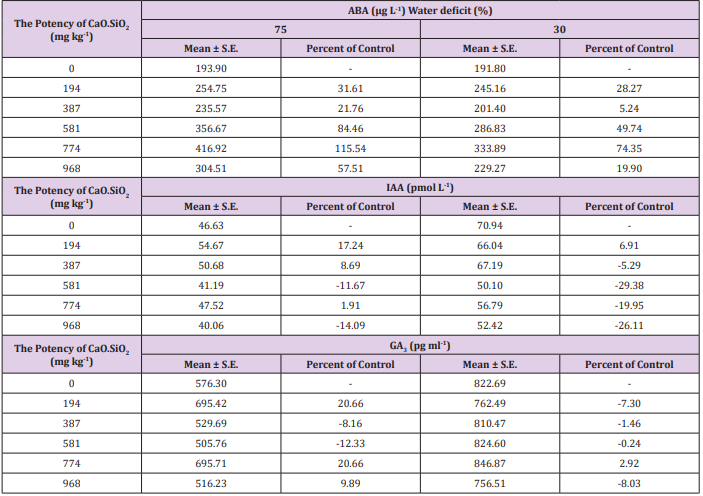 The accumulation of Si in leaves were found increased (3.6 - 58.2%) under mild and (3.8 - 55.3%) severe stress condition with silicon application (Table 5). Silicon has been extensively shown to enhance crop productivity and stress tolerance [44-46]. In this experiment, we found the CaO.SiO2 addition resulted in an improvement of overall plant development of stressed plants. The results summarized so far indicate that optimizing Si content in plants might be a promising strategy to enhance tolerance against various environmental stresses. Further studies are needed to explore, how silicon triggers the antioxidant defense system in sugarcane under water deficit condition.

Table 5: Effect of CaO.SiO2 addition on the silicon distribution within sugarcane plant leaves under drought-stressed conditions. The data values represent the means of four biological replicates.

We wish to warmly thank Guangxi Academy of Agricultural Sciences (GXAAS), Nanning, Guangxi, China for providing the necessary facilities for this study. This study was supported in part by the Guangxi Research and Development Program Fund (GK17195100), Fund for Guangxi Innovation Teams of Modern Agriculture Technology (gjnytxgxcxtd-03-01) and Fund of GXAAS (2015YT02).

Abiotic stress, such as water deficit, is one of the most devastating factors hindering sustainable agricultural crop output today. Plants use their own defensive strategies to cope with the harmful effects of this stress. Silicon is generally considered as a significant element for the growth, development and biomass/ yield production of plants, especially for those grown under stressful environmental conditions. This study was conducted to assess the impact of Si on antioxidant and phytohormones of sugarcane during water deficit. Experiment arranged as a completely randomized block design (CRBD), was used to examine the effects of two irrigation levels (mild - 75 and severe stress - 30% of FC and six silicon concentrations consisting of 0, 194, 387, 581, 774 and 968mg Si kg-1 soil. Calcium metasilicate (CaO.SiO2 ) was used as a source of silicon. CaO.SiO2 addition also enhanced the activities of catalase, peroxidase, superoxide dismutase and phytohormones according to stress intensity and Si doses. The exogenous silicon plays a key role to tolerate water deficit in antioxidant enzymes base, thereby improving overall development and productivity. The results suggest that sugarcane cultivar GT42 is more tolerant to water deficit conditions because of more efficient antioxidant system.