Objective: To investigate the effect of PBK on cell cycle and apoptosis of prostate cancer cell lines.

Methods: Obtain the differences expression gene, PBK, which related to prostate cancer from high-throughput microarray, Furthermore, the cell cycle and apoptosis of prostate cancer cells were detected by flow cytometry after transfection with PBK inhibitor and overexpression plasmid.

Prostate Cancer (PCa) is one of the most common cancers and has ranks first among cancers which endanger the health of men and have surpassed lung and colon cancers in the United States [1]. In recent years, due to the aging of the population, the westernization of eating habits, and the improvement of diagnosis and treatment, the incidence of prostate cancer has been increasing and ranked third in urological cancers in China [2]. The natural history and prognosis of PCa are diverse. Patients can be asymptomatic without any symptoms or high invasiveness. The Prostate Specific Antigen (PSA) is currently widely used as an indicator for PCa screening, but it is reported that about 70% of men with serum PSA>4 μg/L have no PCa. And screening at this PSA threshold inevitably leads to a higher false positive rate, resulting in unnecessary needle biopsy and puncture-related complications including hematuria, pain, infection, and sepsis [3].

Due to the poor specificity of PSA, a large amount of medical resources is wasted in the treatment of PCa. Therefore, searching for sensitive and highly specific molecular biological markers, as an indicator of prognosis of early PCa, has important scientific significance for individualized treatment of PCa and avoiding waste of medical resources. Our previous research used gene scanning technology to carry out gene detection in 5 cases of PCa patients in our hospital and compared with their paracancerous tissues. PBK was found to be highly expressed in PCa, and it is among the top 10 of differentially expressed genes [4].

PDZ binding-kinase/T-LAK cell-originated proteinkinase (PBK/ TOPK) is a new member of the Mitogen-Activated Protein Kinase (MAPK) family, composed of 322 amino acids, and is a newly discovered silk-threonine kinase [5]. In normal tissues, Gaudet et al. [6] reported that human PBK mRNA was detected in adult testis, placenta, myocardium and pancreas, with the most abundant placenta; and low levels of PBK expression in skeletal muscle, kidney, liver, and lung were detected [6]. It is up-regulated in many tumors and leads to poor prognosis of diseases such as lymphoma, leukemia, breast cancer, melanoma and colon cancer [7-12]. Due to the relevance between PBK and cell mitosis, we hypothesized that PBK promotes tumor cell proliferation and shortens cell cycle in prostate cancer. Meanwhile, the effect of PBK on cell cycle and apoptosis in prostate cancer has not been reported.

Cell lines: Human prostate cancer cells LNCaP and DU145 were supplied by Guangzhou Land Biotechnology Co., Ltd. All cell lines were cultured under conditions of 10% FBS, 5% CO2, and 37℅ and preserved by the laboratory of the Third Affiliated Hospital of Sun Yat-sen University before experiments.

Reagents: Diethyl Pyrocarbonate (DEPC) was from Sigma. Fetal Bovine Serum (FBS), Dulbecco’s Modified Eagle’s Medium (DMEM) and trypsin were from Gibco. All primers were synthesized from Shanghai Bio Co. Ltd. The quantitative PCR Kit (SYBR Premix Ex TaTM) was applied by TAKARA. The CCK8 reagent was purchased from Beyotime Bio. The FuGENE transfection reagent was purchased from Promega. And the Annexin V-FITC Apoptosis Detection Kit was available from Keygen Co.

Real-Time Quantitative PCR: The miRNA of the collected positive cells was reverse-transcribed into cDNA. Subsequently, the target genes were amplified by RT-qPCR using cDNA as template to detect and verify the difference in expression of PBK before and after cell transfection.

b) The value Hi-PBK was normalized using the value of NC:

Cell Cycle Assay: The DU145 and LNCaP cells were infected with lentivirus for 48 hours before analysis. For cell cycle analysis, 1×106 cells were harvested， centrifuged without supernatant from each group and fixed with pre-cooled 70% ethanol at 4℃ overnight or -20℃ for a long time before being washed twice with pre-cooled PBS. Then, cells were harvested by centrifugation, washed once with 1mL PBS, resuspended in 500μL PBS containing RNase A (100 μg/ml), Propidium Iodide (PI) (50 μg/ml) and 0.2% Triton X-100 and incubated at 4°C for 30 minutes in darkness. Finally, according to the standard procedure of flow cytometry, generally counting 2-3 million cells, and the results were analyzed the cell cycle by ModFit.

Apoptosis Assay: The cells were suspended and centrifuged at 1000 rpm for 10 minutes at 4℃. The supernatant was discarded. Then the cells were resuspended in the labeled buffer. Subsequently, Annexin V-FIT was added at room temperature for 15 minutes in darkness. After adding labeled buffer, apoptosis could be observed by fluorescence microscopy and flow cytometry.

RT-qPCR: After constructing Hi-PBK, Si-PBK and NC DU145 and LNCaP PCa cell lines, we performed RT-qPCR to identify the construction of cells. And it was found that compared to the blank control groups, the data showed the expression of PBK was significantly decreased in the groups of Si-PBK cell lines (DU145, the inhibition rate =84.78% P<0.01; LNCaP, the inhibition rate =94.79%, P<0.01); While the expression of PBK was significantly increased in the overexpression groups (DU145, fold=1.20,P<0.05; LNCaP, fold=1.35, P<0.05) (Figure 1). It was proved that the above cell lines were successfully constructed, and the above cell lines could be used for subsequent experiments. PBK can increase PCa cell cycle progression: The cell lines (LNCaP and DU145) mentioned above were employed to study the effect of PBK on PCa cell cycle. The results of cell cycle analysis showed that after inhibition of the expression of PBK caused cell cycle arrest at the G0/G1 phase (LNCaP, P<0.05; DU145, P<0.01) (Figure 2); On the contrary, a higher proportion of S, G2/M phase was shown in the over-expression-PBKDU145/LNCaP cell lines (LNCaP, P<0.05; DU145, P<0.01) (Figure 2). 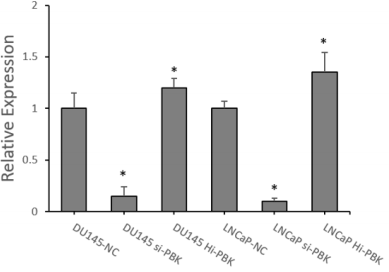 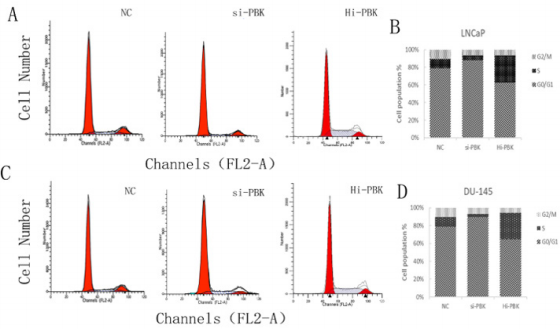 Prostate cancer is one of the common malignant tumors in men worldwide, which prognosis is highly variable. With the popularity of serum PSA screening, more and more prostate cancer patients can be diagnosed at an early stage and get good therapeutic effects after undergoing radical surgery with adjuvant medication. However, PSA screening lacks specificity for the diagnosis and prognosis. We still do not have an effective prognostic assessment of early prostate cancer patients, leading to a lack of targeted treatment: delay treatment time, or over-treatment which wastes a lot of medical resources. Thus, to explore the molecular mechanisms affecting the prognosis of prostate cancer, and find new molecular markers for prostate cancer progression, recurrence and metastasis, it is possible to assess the prognosis of patients with early prostate cancer, and even provide more effective individual treatment.

As an important mitotic kinase, PBK has been reported to have a close relationship with the cdk1/cyclin B1 complex and plays an important role in mitosis [8]. PBK expression and phosphorylation increase during cell mitosis [13]. In the mitosis phase, PBK is upregulated and directly binds to cdk1/cyclin B1 to form a complex. Threonine 9 (T9) in PBK will be phosphorylated by cdk1/cyclin B1 complex. Then, PBK and cdk1 after phosphorylated by T9 / cyclin B1 combines more closely [14]. In fact, PBK phosphorylated accumulates on the mitotic spindle and affects spindle formation [15]. Studies using siRNA to knockdown PBK have shown that PBK can affect spindle formation [8]. When PBK is inhibited, the spindle (especially the central part) in mitosis becomes blurred, and the subsequent cytoplasmic division cannot be successfully completed. As a result, the cells will split out of the multinucleated cells. Therefore, PBK is involved in the regulation of proliferation and cycle changes of malignant tumor cells to promote the tumor cell transformation [5].

This work was supported by Medical Scientific Research Foundation of Guangdong Province (Grant No. B2018151), Guangdong Natural Science Foundation (Grant No. 2018A030313946) and Science and Technology Planning Project of Guangzhou (Grant no. 201610010016).

Objective: To investigate the effect of PBK on cell cycle and apoptosis of prostate cancer cell lines.

Methods: Obtain the differences expression gene, PBK, which related to prostate cancer from high-throughput microarray, Furthermore, the cell cycle and apoptosis of prostate cancer cells were detected by flow cytometry after transfection with PBK inhibitor and overexpression plasmid.