Myrothecium as Promising Model for Biotechnological Applications, Potentials and Challenges

Myrothecium species have a worldwide distribution as endophytic fungi that colonize various hosts [1], as saprophytic fungi in the soil and decaying tissues of plants [2-4], or as pathogens on various hosts [5-9]. Myrothecium species belong to the fungal family Stachybotryaceae, and over 30 species have been reported till 2011 [10], while the Index Fungorum database listed 90 records for Myrothecium in March 2019 http://www.indexfungorum. org/names/Names.asp. In this review, the biological activities, potential biotechnological applications, and challenges facing commercializing Myrothecium or its products were highlighted in order to encourage more studies on this miraculous fungus. 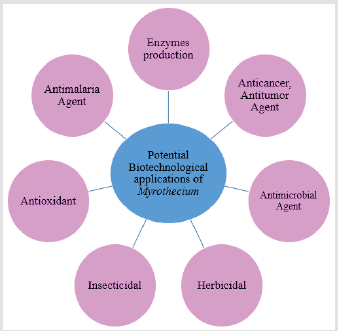 Figure 1: Some biotechnological applications of Myrothecium. 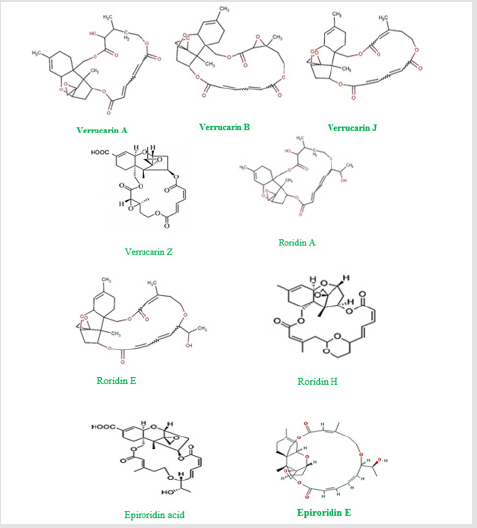 Some Biotechnological Applications of Myrothecium

Myrothecium uses in Biocontrol of Insects

Thanks to its ability to produce many enzymes, Myrothecium verrucaria has a promising insecticidal activity. Those produced enzymes are capable of degrading the extracellular cuticles of insects [20,22,23]. Thus, M. verrucaria represents potential tool for the biocontrol of insects such as mosquitoes [22]. Moreover, the activity of M. verrucaria as a nematophagous fungus could be used in biocontrolling losses in crops from nematodes. Different mechanisms of nematodes inhibition by M. verrucaria were previously reported, those include affecting hatching of egg, inhibiting development, or through killing the nematode itself [24,25].

Using synthetic herbicides in natural habitats is not recommended due to its impacts on surrounding ecological systems, and the risk of affecting other plants due to the close association between harmful plants (targeted to be killed), and the plant to be protected. Hence, using bio-herbicides may offer alternatives to the control of weeds with synthetic compounds including the use of plant pathogens as bioherbicides [26]. Myrothecium verrucaria is known as for its virulence against numerous weed plant species and is potentially useful as a bio-herbicide [27]. Spraying crude extract preparations of M. verrucaria has proven its pathogenicity against different exotic plants and weed species belonging to different plant families [9] such as plumeless thistle (Carduus acanthoides L.) [28]; leafy spurge (Euphorbia esula L.) [29]; sicklepod (Cassia obtusifolia L.) [27,30]; hemp sesbania [Sesbania exaltata Rydb. ex. A.W. Hill] [27]: kudzu [Puereria lobata (WilId.) Ohwi] [31,32], many weeds affecting commercial tomato fields such as common purslane, horse purslane, spotted spurge, and prostrate spurge [26], besides many morning-glory species (Ipomoea spp.) [33].

Furthermore, M. verrucaria present a promising bioherbicide for controlling pre-plant weed [26]. In spite of having desirable bioherbicidal characteristics such as its high virulence capabilities and broad weed host range, there is a serious disadvantage standing in front of commercializing Myrothecium traits, which is production of mycotoxins such as the macrocyclic trichothecenes [31,34]. Studies are now trying to reduce or those mycotoxins [12,35]. Approaches conducted to solve such problem include changing Carbon and nitrogen sources and concentrations within the culture media [35], getting rid of spores by washing [35], and preventing spore production during growth of the fungus within the liquid culture medium [36].

Myrothecium verrucaria has been known as a producer of bilirubin oxidase [37-39], which has various biotechnological applications such as manufacturing biobatteries and biosensors, bleaching of clothes, degradation of effluents, and dye decolorization [40-43].

Ruma et al. [46] have reported the antioxidant activity of some Myrothecium species crude extracts when assessed by DPPH and ABTS radical scavenging methods. Extracts of some Myrothecium Species exhibited protection of DNA at a concentration of 50 mg/ mL [46]. The macrocyclic trichothecene mycotoxins verrucarin A, verrucarin J, roridin A, and roridin E isolated from the freeze-dried culture filtrate of M. verrucaria BCC 112 exerted strong antimalarial activity against Plasmodium falciparum (K1 strain) [50]. The diterpene antibiotic, myrocin C, exhibited an antitumor activity that moderately increased the life span of Ehrlich ascites tumorbearing mice [51]. Myrothecium spp. have been investigated for the management of cancer due to cytotoxic impacts [52]. Myrothecium species showed also ability to fight some tumours and inhibit liver cancer [53]. The list of potential applications of Myrothecium itself or compounds originated from Myrothecium is steadily increasing. Some potential biotechnological applications of Myrothecium is illustrated in Figure 1.

Generally, Myrothecium species are commonly found in the environment as endophytes and/or saprophytes on dead and decaying plant tissue [54,55], except for some species such as the famous plant pathogen Myrothecium roridum Tode [56], and the weak pathogen M. verrucaria Ditmar [8]. The development of plant diseases caused by Myrothecium is generally related to wet soil conditions, that’s why it is important to take care of watering and soil sanitation in order to reduce crops losses [57]. Myrothecium species have been reported previously infecting coffee [58], seeds of rice and soybean [59], mulberry [52,60], chilli seed [61], rubber fig (Ficus elastic) [62]. Moreover, species Myrothecium were found infecting different economically important crops such as causing leaf blight in cotton [63], Peanut [4]; root rot in red clover [64], leaf spot in sunflower [65], potato [66], and leaf spot pepper [67].

Although the observed phyto-pathogenicity of some Myrothecium species may cause threaten to some crops, especially economically important crops, but it can be directed toward the field of biological control. On the other hand, some species of Myrothecium were reported as indoor air contaminant or growing inside houses which represent potential health hazard due to their ability to produce mycotoxins [68]. Nevertheless, no study has evaluated Myrothecium risk to humans [68]. Myrothecium species produce many mycotoxins such as roridins produced by both M. roridum and M. verrucaria. Roridins are lethal to some plants even in very small concentrations, and they cause myrotheciotoxicosis, sudden death in cattle and sheep accompanied with pulmonary congestion and edema, in addition to necropsy lesions of abomasitis, hepatitis [69-75]. However, many of these trichothecenes mycotoxins exhibited promising biological activities as shown in Table 1. The chemical structure of these trichothecenes mycotoxins were illustrated in Figure 2.

Every study conducted on Myrothecium resulted in discovery of new metabolites or pointing to a possible application, which made Myrothecium species potential source of pharmaceuticals and attracted attention for further investigations of their medical properties. On the other hand, those fungi have various applications in large scale production of industrial enzymes, antibiotics, bioherbicides, and insecticides. Challenges of mycotoxins production by those fungi can be overcome as previously mentioned besides via conducting more studies.

Myrothecium as Promising Model for Biotechnological Applications, Potentials and Challenges