Hyperfibrinogenemia: A Novel Predictor to Identify the Necrotizing Enterocolitis in Newborn Infants

#These authors ZLC, ZPH contributed equally to this study

NEC is a common intestinal inflammatory disease, which induces high morbidity and mortality, of neonates, especially in the premature newborns and very low birth weight (VLBW) infants (<1500 g) [1,2]. The mortality rate is particularly higher in the children requiring surgical intervention [3]. In clinical treatment, radiological and laboratory tests were applied for the initial diagnosis of NEC. When NEC is diagnosed, the patient should be treated with gastrointestinal rest, gastrointestinal decompression and broad-spectrum antibiotics, when blood/stool cultures are positive. Theoretically, when the disease develops into Bell’s stage III phase, a surgical intervention should be considered, though the supportive therapeutic measures outlined above [1]. Perforation and pneumoperitoneum are known indicators for surgery. However, the situation after surgery becomes more complicated. Theoretically, the best time for the operation is the intestinal wall full-thickness necrosis before the bowel perforation occurred. Therefore, it would be a great benefit to perform surgery by the time of intestinal necrosis before perforation. Fibrinogen is synthesized and secreted by the hepatocytes, particularly at an acute-phase inflammatory bowel disease [4]. The concentration of plasma fibrinogen ranges between 2 g/L and 4 g/L and the half-life is about 4 days [5]. Fibrinogen is an important component of the coagulation cascades, as well as a major determinant factor of blood flow and blood viscosity. It also plays a vital role in a variety of physio pathological processes in the body, including inflammation, atherogenesis and thrombogenesis [6]. The identification of the molecular mechanisms linking inflammation and coagulation has highlighted the coagulation cascade factors as new targets for therapeutic intervention in various inflammatory human diseases. Moreover, the increase of plasma is associated with progression of diseases such as vascular disruption or infection, inflammation and tissue necrosis diseases [7]. Therefore, a retrospective study was used to analyze the relationship between the fibrinogen concentration and intestinal necrosis, which might predict intestinal necrosis in NEC children before perforation for determining the optimal surgical intervention, ultimately reduce postoperative complications and mortality.

Data was acquired from the 2nd Affiliated Hospital & Yuying children´s Hospital of Wenzhou Medical University. All the children were newborns and enrolled between October 2008 and August 2018. Totally 456 children were diagnosed with NEC during this period. 178 of patients were treated with surgery. All the children were included in the study if they received surgical interventions. The plasma fibrinogen level was examined about 2h before operation. According to the procedure, the children who had a history of blood transfusion before the fibrinogen test, comorbidity of liver disease, appendiceal perforation or other disease that may influent the level of plasma fibrinogen and whose laboratory test data missing were excluded. Ultimately, 168 children were included in our statistical analysis after screening. First of all, we divided all the children into Intestinal necrosis (IN n=129) and No intestinal necrosis (NIN n=39) groups. Secondly, we divided the children into Intestinal perforation (IP n=83) and No intestinal perforation (NIP n=85) groups for further research. Then, these 168 NEC children with surgery were further divided into four types: 68 Infant patients with intestinal perforation and necrosis (IPN), 61 Infant patients of intestinal necrosis without perforation (INWP), 15 Infant patients of intestinal perforation without necrosis (IPWN), and 24 infants without necrosis and perforation (WNP). Patients were diagnosed with NEC and decided to have surgical interventions by the attending physician according to the CRP concentration, plain abdominal radiograph and clinical symptoms of Bell’s criteria. The doctor and pathologist made the final diagnosis after surgery. All the diagnosis and treatment of the NEC patients were not affected by this study. All children are performed open surgery. They were divided into several groups according to the presence of perforation and necrosis (including intestinal gangrene) (Figure 1). 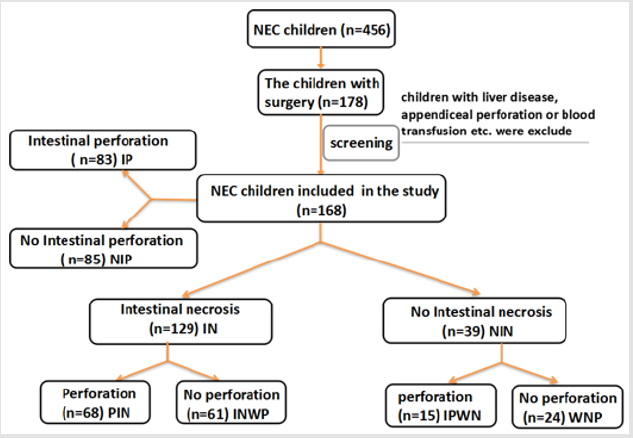 Figure 1: Flow diagram of the study.

Table 1: Basic statistics of the NEC children with surgery (n=168) in the present study. 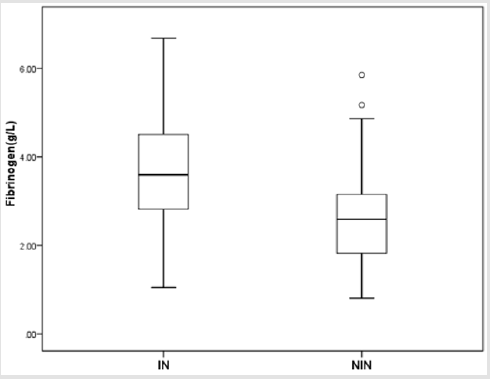 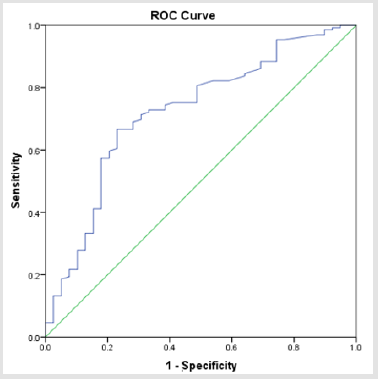 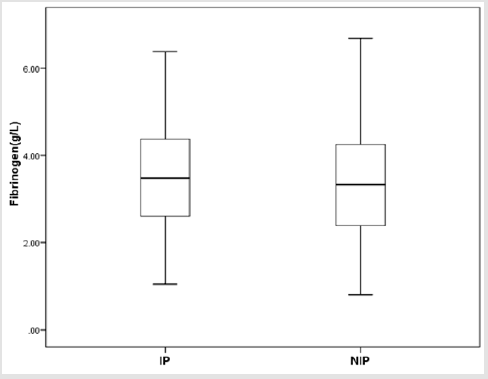 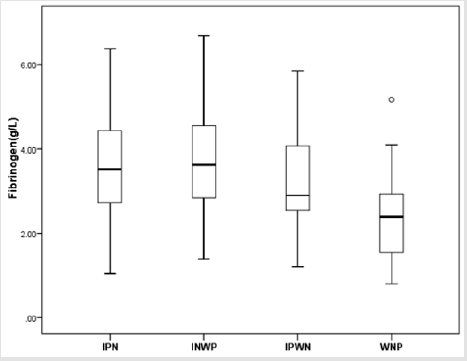 As more and more VLBW preterm infants survive, the proportion at the risk of NEC increases. According to SPSS analysis, approximately 20-40% of NEC children require surgery. Although the mortality rate of NEC has decreased to 20% due to earlier diagnosis and the improvement of intensive care, the mortality rate is higher (50%) for patients who required operation [1,8]. In the clinical diagnosis, Bell’s stage of NEC was used as a reference [9]. Srinivasjois’s research reported that CRP became abnormal in both stage II and stage III NEC and can distinguish from the benign form of NEC suspect, pneumatosis intestinalis, or spuriously suggestive GI conditions [10]. In most cases, only when Bell’s stage III symptoms appear, surgical intervention may be considered. Some radiological signs (portal venous gas, persistent fixed loop, comprehensive intestinal expansion progressing to asymmetrical intestinal expansion, or ascites) and laboratory features (severe thrombocytopenia, neutropenia, or acidosis) might provide a general judgment; however, the only pneumoperitoneum is the known indication for surgery. And this may cause complications and miss the optimal surgical timing. In this retrospective study, there were 168 NEC children of intestinal necrosis in which up to 85 cases with intestinal perforation. There were many postoperative complications of NEC children with intestinal perforation and large proportion intestinal necrosis. To confirm this status in clinical is complicated. Therefore, we should make efforts to improve diagnosis and surgical timing. Through the study, we found that the fibrinogen concentration is greater than 3.165g/L in the patient with intestinal necrosis, regardless of the bowel perforated or not. This might help us discover the NEC children with bowel necrosis before the perforation appearance and suggest that we should perform surgery timely.

Fibrinogen is a glycoprotein protein, made up of three distinct polypeptide chains Aα, Bβ, and γ [5,11]. It plays an important role in pathological conditions, including post-injury, infection, inflammation and disease associated with vascular disruption. In these conditions, plasma fibrinogen concentration usually increases by several folds [12]. It is generally acknowledged that NEC is severe intestine inflammatory disorder, which often occurs, in premature infants. Premature birth, oxygen deficit, immaturity of intestinal barrier, immune defense, excessive feeding, bacterial infection and cyanotic congenital heart disease are predisposing risk factors of NEC, and these factors can induce inflammation reaction. In vitro and in vivo studies indicated that fibrinogen modulates inflammation by regulating leukocyte migration, and directly altering the leukocytes and endothelial cells inflammatory response through an increased cytokine/chemokine response [13]. Fibrinogen plays an important biological role not only in the inflammatory response related infection and disease but also in hemostasis, reproduction and tissue repair. Coagulation and inflammation are activated by the same types of challenges and correlate both temporally and spatially in the same tissues [7]. Fibrinogen is an essential protein of the blood coagulation system and it becomes fibrin when triggered by the procoagulant stimulus. NEC is a severe intestine inflammatory disease. The microcirculation is highly responsive and participant in inflammatory response. All segments of the microvasculature (arterioles, capillaries, and venules) show characteristic phenotypic changes during inflammation, which appear to be directed to enhancing the delivery of inflammatory cells to the infected or injured tissues, isolating the region from healthy tissue and the systemic circulation and setting the stage for tissue repair and regeneration. The most characterized responses of the microcirculation to inflammation include impaired vasomotor function, reduced capillary perfusion, adhesion of leukocytes and platelets, activation of the coagulation cascade, and enhanced thrombosis, increased vascular permeability and an increase in the rate of proliferation of blood and lymphatic vessels [14]. Moreover, hyperfibrinogenemia directly promotes thrombosis and thrombolysis resistance via enhanced fibrin formation and stability [15]. All these factors will lead to the high possibility of intestinal necrosis in NEC children with hyperfibrinogenemia.

From our experience and the review, we found that hyperfibrinogenemia can help us identify the NEC children with intestinal necrosis before surgery. It may provide reference for the timing of optimal surgical intervention, ultimately reduce postoperative complications and mortality in NEC children.

Hyperfibrinogenemia: A Novel Predictor to Identify the Necrotizing Enterocolitis in Newborn Infants

#These authors ZLC, ZPH contributed equally to this study