Introduction: The high prevalence of co-morbidly among cardiac patients may result in undesired consequences, which certainly can compromise their managements. Cardiac rehabilitation can be an appropriate adjunctive intervention for amelioration of such morbid processes.

Results: Significantly, more patients in the target group (56.6%) gained benefit from cardiac rehabilitation, in comparison with only 30 % of them in the control group (P<0.05).

Conclusion: Cardiac rehabilitation seems to be a valuable method for enhancement of improvement in depressed ischemic heart patients.

Cardiac rehabilitation, as one of the known tactics for functional restoration of cardiac functions, according to some studies may have important healing or preventive effects with respect to psychiatric problems, like depression or anxiety, in patients who have suffered cardiovascular accidents. Psychiatric problems can exacerbate cardiovascular dysfunction a number of mechanisms [1,2]. For example, in depressive patients, the somatization of symptoms can reinforce the somatic complaints of ischemic heart patients or, alternately, by reducing the secretion of beta-endorphin the chest pain and its severity can really be increased [2]. Noncompliance with diet and prescribed medications [3], disturbed relationship with caretaker, imposed unnecessary restriction in social and occupational activities due to cognitive distortions or psychomotor retardation, sleep problems, irritability or agitation with its dangerous homodynamic sequels, lowered threshold and vulnerability to cardiovascular accidents due to arrhythmias and decreased sympathetic and increased parasympathetic activity, stress induced coronary vasospasm and platelet aggregation due to increased epinephrine and decreased substance P, are among the major sequels of depression, which has a life-time prevalence of 26% among ischemic cardiac patients [1]. In a prevalence survey in Tehran, there was a high rate of psychiatric co-morbidity (64%) among 101 ischemic heart patients who had been admitted in the Coronary Care Unit (CCU) of an academic general hospital [4].

All of those psychiatric problems had been started many months or years before admission in the CCU. 42.57% of them had co-morbid depression, 9.90% had an anxiety disorder, and 10.89% were suffering from Not Otherwise Specified (NOS) problems. According to the findings of that study, integration of psychiatric co-morbidity and biological risk factors (hypertension, diabetes mellitus, cigarette smoking, and hyperlipidemia) could increase the risk of cardiac events up to three folds [4]. In general, by considering the additional risk (16-20%) of occurrence of major depressive disorder after myocardial infarction (half of them show depressive symptoms 3 months after infarction) with its fivefold increase in mortality in the next six months, we can understand the importance of psychiatric co-morbidity in coronary artery disease. Even hopelessness as a single symptom in depression, disregard to other symptoms, increase the risk of morbidity 1.5-2.5 fold [1]. Moreover, three community-based studies have shown a significant relationship between anxiety disorders and sudden cardiac death.

One study of 1,457 male subjects followed up over 6 years found the risk of cardiac-related death elevated almost fourfold in those with phobic anxiety [5]. Acutely stressful events, as well, dramatically increase cardiac morbidity and mortality. In a prospective study of 95,647 Finnish men and women, the risk of all-cause mortality in the first week following spousal death was two times normal. The risk of any ischemic heart disease event in that period was elevated 2.3-fold in men and 3.5-fold in women, an effect independent of age [6]. Finally, regarding relationship between Type A Behavior Pattern (TABP)-time urgency, hostility, and achievement-striving-competitiveness-and the risk of coronary heart disease, while a 1987 meta-analysis documented the weakening of the association of type A behavior with coronary heart disease [7], the controversies still go on [8-10]. Therefore, cardiac rehabilitation with its supportive, cognitive and behavioral aspects seems to have important psychotherapeutic benefit in accompany with other standard treatments. In this research we evaluated the efficacy of cardiac rehabilitation on amelioration of depressive symptoms.

In an open trial, 30 randomly chosen patients, among referred ones to a cardiac rehabilitation center with the history of a recent myocardial infarction (in the last month), who were suffering from co-morbid depression, too (Table 1), had been delivered a rehabilitation program including: 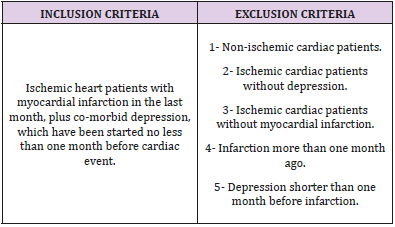 a) Explanation of the nature of cardiovascular diseases

b) Description of the essential process of management

d) Appropriate exercises according to the patient’s compliance with accentuation on restoring the ambulatory status and functional activities as soon as possible after aforesaid cardiac event , in addition to their standard treatments.

All of these programs had been accomplished by the rehabilitation team, including cardiologist (head of team), psychiatrist, psychologist, registered nurse and physiotherapist. The program had been accomplished on cardiac patients, out-patiently, within four weeks of being discharged from the hospital, and the session, as well, had been performed once per week (30-45 minutes), for duration of eight weeks per patient. The diagnosis of depression in both groups had been certified by a psychiatrist according to the DSM IV-TR criteria and had been scored by Hamilton Rating Scale for Depression (HRS-D) [11] at the beginning of the program and then every two weeks during the trial. The HRS-D (HAM-D) is an observer–rated scale consisting of 17 to 21 items. Rating is made on the basis of the clinical interview, plus any additional available information by other resources such as staff or family members. The items are rated on either a 0 to 4 (0=none/absent and 4=most severe) or a 0 to 2 spectrum (0=absent/none and 2=severe). Depressed Mood, Feelings of Guilt, Suicide, Insomnia, activities, retardation, agitation, anxiety psychic, anxiety somatic, hypochondriasis, changes of weight, insight, diurnal variation, depersonalization and derealization, paranoid ideations, and obsessive or compulsive symptoms are the items which are scored in HRS-D. The control group, too, included 30 randomly chosen ischemic cardiac patients with similar co-morbid psychopathology, among the referred ones, who received only the standard treatments (antihypertensive, anti- angina, and antidepressant medications). All of the aforesaid patients in both groups had been prescribed antidepressants from no less than one month before their entrance into the trial. Total duration of study was around eighteen months, from August of 2000 till February of 2002.

Patients were compared on baseline characteristics by means of t-tests. Treatment efficacy also was analyzed by ‘Comparison of Proportions’. Statistical significance was defined as a 2-sided p value < or = to 0.05. MedCalc, version 9.4.1.0, was used as statistical software tool for analysis.

Table 2: Classification of patients according to the severity of depression. 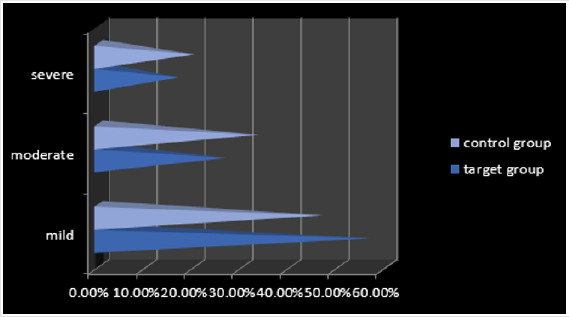 Figure 1: Severity of depressive symptoms in both groups at baseline.

Psychic anxiety was the most influenced one in the target group (Table 3). Most improvements had appeared in the last two months. No important improvement was evident in the remaining items. Besides, all of these positive responses had been palpable in the Mild and Mild to Moderate classes of that group. In the control group, too, there were some improvements in the depressed mood (16.66%), work activities (10%), helplessness (10%), hopelessness (10%), anxiety psychic (16.66%), hypochondriasis (10%), agitation (10%), and retardation (6.66%). The psychic anxiety and depressed mood also were the items with the greatest improvement in the control group (Table 4), which had appeared mostly in the last ten weeks of the trial among the first two classes of the patients (Figure 2). 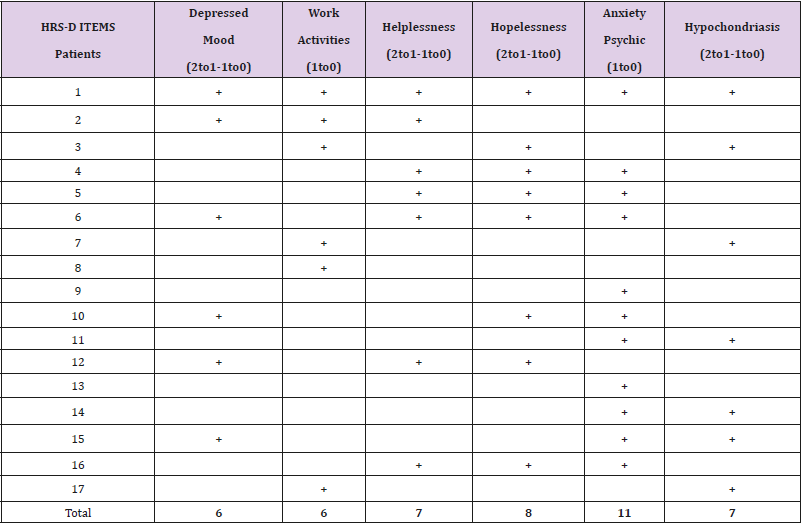 Table 3: Physiognomies of improved symptoms in the target group.

Table 4: Physiognomies of improved symptoms in the control group. 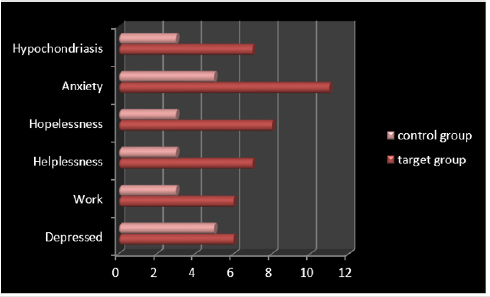 Figure 2: Quantitative difference between groups regarding improvement of HRS-D at the end of assessment.

Anxiety and depression are more prevalent in patients with cardiovascular disease than in the general population [12]. A study of 200 patients who had suffered a first Myocardial Infarction (MI) found a 1-year cumulative incidence of depression of 25% [13]. Also, in patients with Congestive Heart Failure (CHF), three studies have found the prevalence of depression to be approximately 20% [14]. Although the epidemiology of anxiety disorders in CAD is not as well studied as that of depression, the incidence of anxiety symptoms in patients with acute coronary disease in cardiac care units is approximately 50% [15]. Besides, depression is linked to a large number of major risk factors for CAD or cardiac-related mortality, including cigarette smoking, diabetes, and obesity. Prospective studies indicate that depression is an independent risk factor in the development of these behaviors or conditions and also strong independent risk factor for the development of cardiovascular disease, of acute coronary events, and of mortality from cardiac illness. In general, studies show that the relative risk of incident cardiac disease in healthy individuals with depression or symptoms of depression is about 1.5 to 2, depending on which cardiac endpoint is used [16,17]. Also, findings of a recent study on 2,111 incident myocardial infarctions, in a large Norwegian population based cohort, showed that self-reported symptoms of depression and anxiety, especially if recurrent, were moderately associated with the risk of acute myocardial infarction [18].

Though there was not any substantial wide-ranging reduction in HRS-D in the target group and, likewise, there was not any improvement with respect to severe symptoms, and over again all of the positive responses were slight (1-0 or 2-1), nevertheless the better response of depressive symptoms in the target group in comparison with the control one, which was evident significantly in ‘comparison of proportions’, had revealed an adjunctive remedial influence of cardiac rehabilitation on this group of cardiac patients; an outcome similar to the findings of Lavie et al. [19-22]. But while methodology of most of the said scholars addressed mainly post-MI mood problems (in contrary to present study which had targeted premorbid mood difficulties just before occurrence of cardiac event), but according to the findings of the current try-out its assistance seems to be generalizable to co-morbid psychiatric symptoms regardless to its primary or secondary process. Moreover, it should not be disregarded that many of the depressive symptoms which appear after such serious events are merely adjustment disorder, not a full-blown major depressive disorder. Therefore, while negative cognitive processing of cardiac patients can be strengthened by the influence of depressive mood and, consecutively, reinforcement of somatic problems and deterioration of their survival, cardiac rehabilitation may decline this negative process by its verbal (explanatory) and nonverbal (physiotherapeutic) components and increase patient’s self-esteem and self -competency, which are antagonist of self-depreciation and pessimistic point of view [23].

Psychiatric symptoms are not infrequent among ischemic cardiac patients (especially depressive illnesses) and can have a detrimental influence on exacerbation of cardiac events by bringing out a morbid circle, incidentally. Its positive influence on psychological manifestations of depression, especially: anxiety, hopelessness, helplessness, hypochondriasis, depressed mood and finally work activities may be accounted as significant remedial effect, because any kind of undesirable impact due to their negative cognitive and somatic influence possibly will jeopardize patient’s survival.

Introduction: The high prevalence of co-morbidly among cardiac patients may result in undesired consequences, which certainly can compromise their managements. Cardiac rehabilitation can be an appropriate adjunctive intervention for amelioration of such morbid processes.

Results: Significantly, more patients in the target group (56.6%) gained benefit from cardiac rehabilitation, in comparison with only 30 % of them in the control group (P<0.05).

Conclusion: Cardiac rehabilitation seems to be a valuable method for enhancement of improvement in depressed ischemic heart patients.