3Republican Scientific and Practical Center of Neurology and Neurosurgery, Belarus

The article briefly describes advantages of autologous mesenchymal stem cells (MSCs) use in clinical conditions to correct structure and function of damaged areas in organs and tissues of humans and animals. The effectiveness of MSCs migration via perineural nerve spaces to inner organs was confirmed. Such method of cell therapy allows avoiding major surgeries and achieving more effective result in combination of classic treatment techniques with MSCs perineural delivery to damaged organs and tissues.

The progress of modern medicine is also associated with highcost technologies, expensive creation of medicines, and unique ways of transplantations of inner organs, which are available only for selected people [1]. However, statistics even in advanced countries shows low success in treatment of socially important diseases [1,2]. Mortality due to cardiovascular diseases and oncological pathology remains high. So, classis and even innovative therapeutic and surgical techniques of fatal pathological processes treatment appeared to be low-effective. All realistic people think that such situation cannot be accepted. It is fortunate that there are modern Don Quixote’s who try to struggle against certain diseases using alternative ways of treatment but not against windmills. It is important that smart part of modern Don Quixote’s does not reject existing protocols of treatment. They try to broaden possibilities of these methods by new ideas. Researchers create such innovative techniques which complement classic ones [3-5]. What did we really achieve till nowadays?

We will focus attention on treatment techniques using stem cells (SCs) in this article. Discovery of SCs perplexed scientists. It was found that organs and tissues have potential to recover damaged tissue areas. But why such potential appeared to be so weak? We always stare in envy at scientific films about recovery of damaged tails in lizards. But reparative processes involving endogenous SCs are low-effective in humans. Researchers tried to combine cell therapy with standard protocols of treatment-and the hope appeared on the horizon. Unfortunately, all good hopes were destroyed by data on follow-up results. First positive outcomes of such combined therapy were of short duration. SCs did not want to survive in tissues. That is why there were weak positive effects of cell therapy noticed in long follow-up periods. Researchers tried to improve the situation by using scaffolds, exosomes and techniques of directed SCs movement caused by magnet and ultrasound [3-5]. Also new methods of combined therapy using stem cells and macrophages were developed [1]. It was based on join role of both stem cells and macrophages in the processes of immunosuppression, tissue remodelling, angiogenesis [1].

Authors enthusiastically began experimental analysis of MSCs functions in the recovery of impaired brain functions [6-10]. Majority of scientists apply systemic ways of MSCs administration, but this leads to inconsistent results and does not satisfy neither patients, nor doctors. The problem of blood-brain barrier overcome is still unresolved. Its protective function is amazing – take at least observation when post mortal injection of trypan blue into brain major vessels does not allow identifying this stain in brain tissue within several hours [11]. Administration of MSCs via lumbar puncture does not consider rostro-caudal flow of cerebrospinal fluid. Direct injection of MSCs into damaged brain region followed by trepanation is frequently unreasonable due to additional surgical interventions. Authors chose technique of MSCs perineural migration in combined therapy of brain injuries and strokes with SCs [6-10]. Cranial nerves were chosen as the way for MSCs migration. Injection of MSCs into cranial nerves’ endings in facial area is quite simple surgical procedure which guarantees MSCs migration to damaged brain regions [6-10].

Such manipulations were performed in line with approved by the Ministry of Health of the Republic of Belarus treatment protocols in 40 patients with ischemic and hemorrhagic strokes [12,13]. Only autologous MSCs were used [12,13]. Authors considered well known fact that MSCs actively move in the living organism to damaged tissue or organ. Such migration is triggered by multiple signaling molecules of protein and other nature which are expressed in damaged tissues. This observation is very promising for bioprinting technology [14]. Authors experimentally proved effectiveness of such technique on laboratory animals (Figure 1) when MSCs were injected into perineural space of vagus nerve at the level of thyroid cartilage leading to recovery of impaired heart functions [15,16]. The technique (Figure 1) was further developed and used for MSCs delivery from perineural space of vagus nerve to damaged areas in liver, pancreas, stomach and small intestine [17]. Such method of cell therapy guarantees targeted perineural migration of MSCs to certain damaged organ. Therefore, there is no more need of using major surgery to implement technique of MSCs migration. 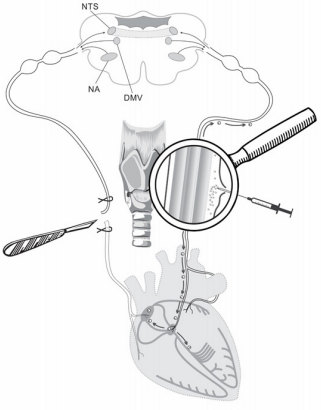 Obtained experimental data and clinical outcomes speak for technique of MSCs migration as promising method for activation of reparative processes in damaged areas of inner organs. Future development of combined cell therapy with standard treatment ways should consider using only autologous MSCs together with individual characteristics of patients and optimal way of MSCs perineural delivery to damaged area.

This pooled analysis was funded by OOO “Synergy”, and by SSTP “New methods of medical care”, section “Transplantation of cells, tissues and organs” (2016-2020).

All listed authors concur with the submission of the manuscript; all authors have approved the final version. The authors have no financial or personal conflicts of interest.

3Republican Scientific and Practical Center of Neurology and Neurosurgery, Belarus

The article briefly describes advantages of autologous mesenchymal stem cells (MSCs) use in clinical conditions to correct structure and function of damaged areas in organs and tissues of humans and animals. The effectiveness of MSCs migration via perineural nerve spaces to inner organs was confirmed. Such method of cell therapy allows avoiding major surgeries and achieving more effective result in combination of classic treatment techniques with MSCs perineural delivery to damaged organs and tissues.