Effects of Intravascular Laser Irradiation of Blood on Cognitive Function in a Stroke Survivor with Hyperhomocysteinemia: Dual Recuperations in Thalamus and Serum Homocysteine

A 50-year-old male who has history of hypertension without regular medications control suffered from difficulty in getting up and falling down on ground on 2015/07/26. At that time, his consciousness was clear, and right-sided limb/body was weak. He spoke haltingly. The first brain CT performed in a local hospital showed left intracranial hemorrhage and pontine infarction, and the second brain CT showed left thalamus intracerebral hemorrhage and intraventribular hemorrhage in a medical center. Right EVD insertion for monitor and CSF drainage were done on 2015/07/27. Since then, he had lots of inpatient rehabilitation in the past 2-3 years. Pain of the right shoulder took place in 2016, which made him visit our OPD for help until 2017/07/04. During outpatient visit, he showed right side limbs weakness with strength grading: upper limbs (right / left) 3/5; strength grading: lower limbs (right /left) 3/5. He had impaired walking ability and partially dependent activity of daily living, as well as right shoulder pain.

Cognitive impairment was examined by using Mini-Mental State Examination (MMSE) and recorded as 21 (Figure 1). The homocysteine level checked on 2017/08/11 showed value bigger than 50 umol/L. The brain perfusion scan with single photon emission computed tomography (SPECT) revealed decreased radioactivity over the left temporal, left parietal, left frontal, left striatum (esp. the putamen), left thalamus and right cerebellum, (Figure 2A). In the following 16 months, he underwent six-course ILIB, which method of approach has been previously detailed [4]. He stated that, after ILIB, he had no more shoulder pain, and had improved spirit and better sleeping quality, even spasticity remained. MMSE was recorded as 28 (Figure 1). The serum level of homocysteine reduced to 20.60 umol/L on 2018/12/01. The second SPECT showed improvement in right cerebellum, both inferior frontal lobes, and left basal ganglion, as well as anterior thalamus (Figure 2B). 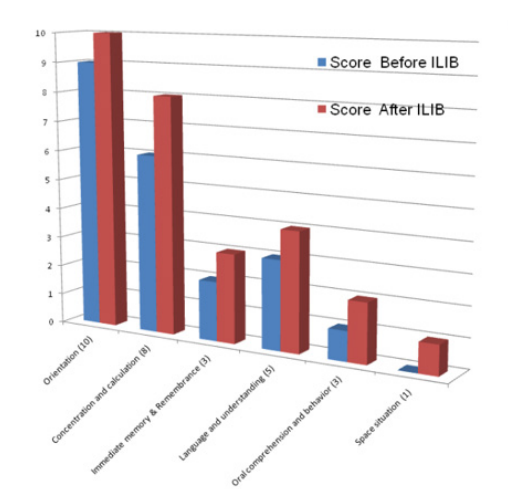 Figure 1: Mini-Mental State Examination (MMSE) of the patient, 21 before ILIB and 28 after ILIB. ILIB: intravenous laser irradiation of blood. 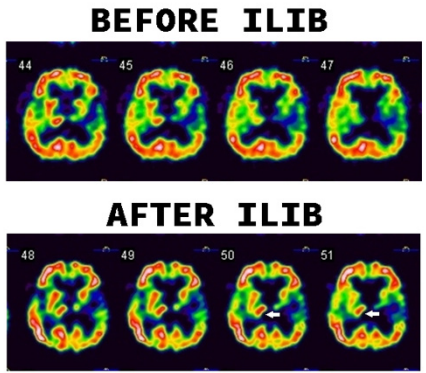 Figure 2: Tc-99m ethyl cysteinate dimer (ECD) brain perfusion SPECT study. Before (A) and after (B) the intervention of ILIB, there was increased uptake in the right thalamus (white arrow). ILIB: intravenous laser irradiation of blood.

ILIB has been applied to many diseases, for instance, arthritis [5- 7], fibromyalgia [8], hepatic disease [9], postpartum mastitis [10], diabetes mellitus [11-13], some systemic dys-metabolism [14,15], and regional cerebral hypoperfusion [4,16], as its properties of improving oxygen supply and hence amplifying microcirculation. Cognitive impairment is common among patients after stroke episode. Several stroke characteristics are thought to be associated with an increased risk of cognitive impairment. Those heterogeneous risk factors have been reported as haemorrhagic stroke [17], lobar location of a parenchymal haemorrhage [18], occurrence of aphasia, multiple strokes [2], demographic characteristics (e.g., female sex, lower education, and racial background), or presence of known vascular risk factors [2]. n a study that recruited patients with different subtypes of strokes, cognitive function as indicated the MMSE was significantly impaired 6 months following the initial insult, and MMSE performance in post-stroke patients, 87% as ischemic of them, was significantly worse than that of the nonstroke control group [19]. A recent study showed, in “first-ever” ischemic stroke patients, the 30-year risk of cognitive impairment is 1.72 times that of the population; however, the risk is even greater for haemorrhagic stroke survivors [20].

Researchers have confirmed both the Papez circuit and prefrontal-subcortical circuit as important neural structures for integration of cognitive function. The Papez circuit is involved in spatial learning and episodic memory, which circuit consists of the hippocampus, Para hippocampal gyrus, entorhinal cortex, mammillary bodies, and cingulate gyrus, and is interconnected by white matter tracts consisting of the fornix, mammillothalamic tract, cingulum bundle, and anterior thalamic nuclei [27]. In addition, three prefrontal-subcortical circuits are involved in Behavioral and cognitive alterations, e.g. the dorsolateral prefrontal circuits, the orbitofrontal circuits and the anterior cingulate circuits [28]. An ischemic stroke lesion related to post-stroke cognitive impairment often perturb the prefrontal-subcortical circuits including the bundles of white matter (corona radiate or centrum semiovale) [29], leading to executive deficits associated with prefrontal hypoperfusion [30]. Since disturbances in both local and global networks in the brain have been associated with deficits in cognitive function, therefore, disrupted or lately repaired neural network activity may provide valuable observation of a therapeutic intervention.

Interestingly, our case showed remarkable increase perfusion in the thalamus (Figure 2), indicating recovery of brain parenchymal lesions related to post-stroke cognitive impairment was attributed by the Papez circuit, rather than prefrontal-subcortical circuits. This finding suggests cognitive dysfunction in adult with stroke may be potentially reversible with intervention of ILIB. The reason for preference in Papez circuit was unknown and should be investigated later. Increasing evidence had confirmed that homocysteine is associated with distinct category of cardiovascular and cerebrovascular diseases [31,32]. HHcy is related with functional disability in the any phase of stroke, and many articles confirmed a significant correlation between lower cognitive function and raised homocysteine level [33-35]. It has been shown that patients with acute stroke with elevated serum homocysteine levels are at an increased risk for early neurological deterioration [36]. Increased serum levels of Hcy may cause neurotoxicity and inflammatory activity. Direct toxicity and vascular endothelial injury in ischemic stroke patients whose inflammatory system reacts most extremely may be at bigger risk for cerebrovascular diseases [37].

With respect to the treatment, HHcy represents a potentially modifiable risk factor for stroke, but the published methods for reduction did not have promising results. [38] Our ILIB provides phototherapy. It has been known that some proteins or enzymes are photo-sensitive and can be activated to exert specific function, for instance, vascular endothelial growth factor, cyclooxygenase-2 and matrix metalloproteases, as well as photosensitive ganglion cell in eye retina [39]. Nitrile hydratase can also catalyse hydration of nitriles to the corresponding amides when unbinding a nitric oxide at light at the non-heme iron center, but inactive if binding with nitric oxide at dark [40]. Homocysteine can be metabolized by two pathways: demethylation by methionine synthase and transculturation by cystathionine beta-synthase [32]. It was interested to observe if both enzymes, or either one, would be activated after exposure of ILIB, which hence to reduce serum level of homocysteine. Further study will be elucidated. Our case showed a remarkable improvement of cognitive impairment correlated with cognitive testing after six-course ILIB, which improved the perfusion in thalamus and decreased the serum level of homocysteine. Further studies on a larger number of patients are needed to test this hypothesis.

The fact of the recuperation in cerebral perfusion of thalamus and serum level of homocysteine in the present case after intervention of ILIB suggest that ILIB might possess dual effect to increase thalamus perfusion and, simultaneously, enhancing catabolism of homocysteine.

Effects of Intravascular Laser Irradiation of Blood on Cognitive Function in a Stroke Survivor with Hyperhomocysteinemia: Dual Recuperations in Thalamus and Serum Homocysteine