Effects of Nitrogen Treatment on Growth Characteristics in Moso Seedling

Nitrogen is the most important nutrient factor in plant growth [1]. Application of nitrogen can affect plant nitrogen metabolism, photosynthetic apparatus and energy distribution, respiratory metabolism, etc. The ultimate manifestation of these physiological metabolisms is the growth pattern of plants and biomass. However, the concentration of nitrogen fertilization affects plant growth [2] and the reasonable application of nitrogen fertilizer will promote the growth of plants [3-6]. Therefore, the study on the effects of nitrogen on the growth of different plants has attracted more and more attention. Moso bamboo is an important economic bamboo species in China, nutrient absorption laws in different developmental stages [7] of moso bamboo has been studied in recent years [8-12]. The results show that when nitrogen supply is sufficient, bamboo depends mainly on improving nutrient content to maintain life activities. When nitrogen is poor, it adapts to environment changes mainly by increasing nutrient resorption. However, these results are based on data obtained from field trials, and different ages plants have a greater impact on nitrogen uptake and transport [13]. There is no report on the demand for nitrogen fertilizer in bamboo seedlings only Shao JF [14] studied the hydroponic system of bamboo seedlings, it’s found that the application of nitrate nitrogen is more suitable for bamboo seedlings growth.

Collect 500 new seeds of moso bamboo, peel off the seed coat, soak it in cold water for 48 hours, rinse the tap water and wash it, wash off the excess detergent, rinse it with water for 0.5-1h, then wash it with distilled water. Put it into a clean bench, soak it in 0.5 %-0.8 % formaldehyde for 4-6 h, sterilize the seeds evenly after shaking for several times, rinse it with sterile water 4 times after sterilization, put it on the water-impregnated filter paper, and put it in the dark and germinate at 25℃. After the seeds were germinated, they were sown in clean, moist quartz sand in March 27, 2017. After 15 days, the seedlings with the same growth were selected and transplanted to a 1/2 concentration Hoagland nutrient solution: 0.5 mmolL-1P was supplied with KH2PO4, 3 mmolL-1 was supplied with KNO3 and KH2PO4, 2.5 mmolL-1Ca was supplied with Ca(NO3)·2H2O,1.0 mmolL-1Mg was supplied with MgSO4, and the micronutrients were 46.26 μmolL-1Mg>1B(H3BO3)，20.06μmolL-1 Fe(EDTA-Fe), 9.15μmolL-1Mn (MnCl2·4H2O)，0.77 μmolL-1Zn (ZnSO4·7H2O)，0.32μmolL-1Cu(CuSO4·5H2O) and 0.39μmolL-1Mo(H2MoO4.4H2O).NH4NO3 was added for different concentrations of N treatment. The treatment concentrations were 2 mmol/L, 1.5 mmol/L, 1 mmol/L, and 0.5 mmol/L, respectively. The control CK did not add NH4NO3. Each of the bamboo seedlings was treated with 20 plants, each plant was numbered, the nutrient solution was continuously ventilated by the same pump. The pH of all treated nutrient solutions was adjusted with a pH meter and 0.1 molL-1 NaOH or 0.1 molL-1 HCL to keep it at around 7.35, and the nutrient solution of different treatment concentrations were changed in two days.

From April 10, 2017 (initial stage of treatment) to May 10 (end stage of treatment), each seedling was measured every 3 days, including seedling height, root length, first internode length, second internode length, and third internode length. The seedlings were treated with different nitrogen concentration, and fresh weight of the roots, stems and leaves was measured(W1), the leaves were gently wiped with a wet gauze, and the roots were washed with deionized water and then blotted with absorbent paper. After being killed (105℃, 30 minutes), it is dried to constant weight at 70℃, and the dry weight of roots, stems and leaves (W2) is measured. Water content = (W1-W2) / W1* 100%.

After the treatment, 3~5 pieces leaves with relatively uniform light were selected The net photosynthetic rate (Pn) and Maximum photochemical efficiency (Fv/Fm) of the leaves were determined by Li-COR6400 portable photosynthetic apparatus (Li-COR, USA) and ultra-portable chlorophyll fluorescence instrument Mini-PAM (WALZ, Germany) from 9:00 to 11:30. The experiment was controlled at room temperature of 25℃, light intensity of 800μmol·m-2·s-1, and reference chamber CO2 concentration of 380 mol·L-1. Three replicate plants were determined, and three leaves were selected per plant, and the results were averaged.

Use Excel 2007 and SPSS14.0 to perform statistical analysis, use one-way ANOVA and LSD for variance analysis and multiple comparisons (α = 0.05) and uselinear regression for correlation analysis. The data in the chart are mean value ± standard deviation.

The Growth Characterics After Nitrogen Treatment in Moso Seedlings 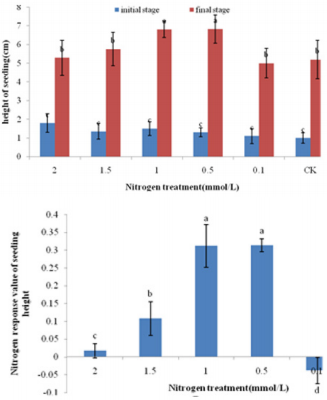 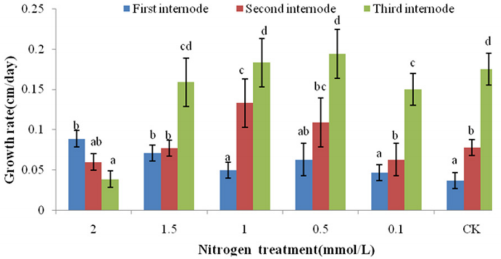 The other treatments were opposite to the 2 mmol/L treatment results. The growth of the first internode was shorter and the elongation rate was slower , but the growth was faster and longer during the second and third internodes.in 0.1 mmol/L, 0.5 mmol/L,1.0 mmol/L and 1.5 mmol/L treatment (Table 1).

Note: Different small letters in the same line meant significant difference among different nitrogen treatment at 0.05 level. The same below.

Changes in Photosynthesis of Moso Seedlings After Nitrogen Treatment

The Absorption and Transportation Efficiency of Nitrogen in Moso Seedlings

Table 3: The absorption and transportation efficiency of nitrogen in moso seedlings.

In this study, low nitrogen promoted the growth of moso bamboo seedling, but the root growth rate of bamboo seedling decreased when the concentration of nitrogen treatment reached 1.5 mmol/L, and the increasing rate of seedling height decreased at 2 mmol/L, which indicated that excessive nitrogen fertilizer first inhibited root growth, and then inhibit the growth of the whole plant if the nitrogen fertilizer continued increased [16]. High concentration (2 mmol/L, 1.5 mmol/L) nitrogen treatment significantly inhibited the elongation between the second and third internodes of the bamboo seedling and promoted the elongation between the first internodes. On the contrary, low concentration (1 mmol/L, 0.5 mmol/L, 0.1 mmol/L, CK) nitrogen treatment promoted the elongation between the second and third internodes. It indicated that it can absorb more nitrogen fertilizer and synthesize more protein under the high nitrogen treatment of the bamboo seedling in the early stage , With the prolongation of treatment time, high nitrogen inhibits the division and growth of plants, while low nitrogen concentration is suitable for the growth of bamboo seedlings and promote its growth. Nitrogen application can significantly improve the potential photosynthetic capacity ,respiratory metabolism, and ultimately affect the establishment of plant growth morphology and biosynthesis of the bamboo seedling. Regression analysis showed that the total nitrogen content of bamboo seedling after treatment was significantly correlated with root length, fresh weight, Fv /Fm, Tr and gs . The values of Pn , Tr and gs increased with the increase of nitrogen concentration, because nitrogen directly affects the nitrogen metabolism, photosynthetic apparatus and energy distribution of plants, and the appropriate amount of nitrogen increases the nitrogen uptake of respiratory metabolism, which is beneficial to photosynthesis and carbohydrate synthesis [17-19] regulating photorespiration-related indices [20- 21], while excessive nitrogen application inhibits photosynthesis of moso bamboo seedlings and inhibits their growth (Figure 4). In this study, the bsiomass of bamboo seedlings was dominated by stalks because plants can induce the distribution of nutrients to larger above-ground organs [12]. Ye Jing’s research on Dendrocalamopsis oldhami (Munro)Keng and Bambusa textilis McClure showed that the distribution rate of Dendrocalamopsis oldhami (Munro) Keng stalk biomass was more than half [22], which was consistent with the results of this study. 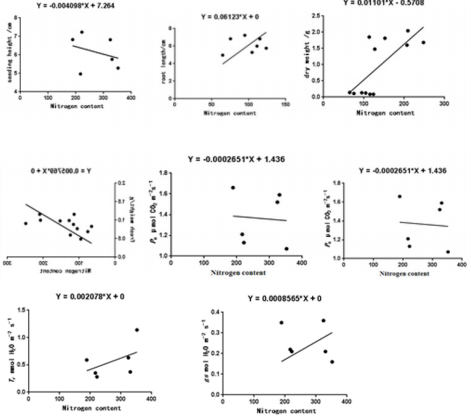 The high-concentration nitrogen treatment (2 mmol/L, 1.5 mmol/L) of the bamboo seedlings has a high root-shoot ratio and high total nitrogen content. However, the nitrogen utilization efficiency of bamboo shoots is higher at low concentration of nitrogen treatment (1 mmol/L, 0.5 mmol/L, 0.1 mmol/L).Because nitrogen is the largest of all mineral nutrients [23] that affects root morphology, growth and its distribution in the medium. Plants have the root system into the nutrient-rich area to maximize the use of limited nutrient resources [24]. As a result, the nitrogen uptake rate of the root system increases, and the root-shoot ratio increases. At the same time, correlation analysis showed that the total nitrogen content was significantly correlated with root growth, which also fully explained the sensitivity of roots to nitrogen utilization [25- 26]. However, it was found that nitrogen can be efficiently absorbed by high-nitrogen treatment (2 mmol/L, 1.5 mmol/L), but it cannot be used efficiently. The results of the effects of nitrogen were consistent to maize seedling growth, root morphology and nitrogen uptake and utilization efficiency [27].

This work was supported by the Twelfth Five-YearForestry Science and Technology Support Program of China (2015BAD04B03).The authors declare that they have no conflict of interest.

Effects of Nitrogen Treatment on Growth Characteristics in Moso Seedling