Type 2 diabetes mellitus (T2DM) is a metabolic pro-inflammatory disorder characterized by chronic hyperglycemia and alteration in circulating adipokines. Chemerin and vaspin have recently been identified as novel adipokines with high expression in adipose tissue of obese and T2DM subjects and with potentially insulin-sensitising properties. This study designed to appraise the susceptibility between rs17173608 chemerin and vaspin rs2236242 genes polymorphism and T2DM in obese Egyptian patients and to assess its influence on the serum level of their corresponding adipokines. Study was conducted on 210 T2DM patients and 140 healthy individual control. Serum chemerin and vaspin levels were measured by enzyme linked immunosorbent assay.

Type-2 diabetes mellitus (T2DM) is an endocrine disease having a significant genetic component. Polymorphisms of many genes may affect genetic susceptibility of the disease that is characterized by insulin resistance and islet disorder [1]. Several lines of evidence suggest that genetic polymorphism plays a pivotal role in the pathogenesis of a wide range of human disorders including cancers, diabetes, cardiovascular disorders, kidney diseases, and neurodegenerative diseases [2]. Obesity and type-2 diabetes mellitus (T2DM) are related to dysregulation of adipokines. Recent researches have shown that novel adipokine chemerin is involved in regulation of inflammation, adipogenesis and glucose metabolism by functioning as an endocrine signaling molecule [3]. Chemerin serves as a potent chemoattractant when acting as a ligand on cells expressing Chemerin receptors. White adipose tissue had high expression of both chemerin and its receptor CMKLR1 (chemokine-like receptor1), confirming that they serve as a primary source of chemerin.

Furthermore, Chemerin stimulates lipolysis by direct activation of hormone-sensitive lipase in mature white adipose cells [4]. Chemerin levels have been proven to have a direct positive correlation with adiposity indices. It has been linked with visceral obesity and resultant cardiovascular disease [5]. Chemerin influences adipose tissue development, inflammation, and glucose homeostasis and may contribute to the metabolic derangement characteristic of obesity and obesity-related diseases. Disruption of chemerin gene is associated with glucose intolerant and decreased glucose-stimulated insulin secretion as well as decreased skeletal muscle and white adipose tissue glucose uptake [6]. Moreover, it may be involved in cross-talk between adipose tissue and skeletal muscle contributing to the negative relationship between obesity and insulin sensitivity [7]. Chemerin is located on chromosome b7q36.1 and is composed of 6 exons and 5 introns, which encodes a protein of 163 amino acids [8]. chemerin rs17173608 (T/G) is in the intron 3, it is suggested that this single-nucleotide polymorphisms (SNPs) probably affect only gene expression and not the function of the gene product [9].

In recent years, several polymorphisms in candidate genes such as adipokines that may influence susceptibility to T2DM [10]. Chemerin gene polymorphisms were studied in patients with metabolic syndrome and diabetes [11]. Vaspin is a recently identified novel adipokine related to high expression in adipose tissue of obese and T2DM patients and insulin sensitivity [12]. The precise mechanism of vaspin in the body is not well known [12]. This may be due to inhibition of proteases that degrade antihyperglycemic and anorexigenic molecules [13] or anti-inflammatory effect [14]. Thus far, it is not distinct whether elevated vaspin levels represent a cause or the consequence of T2DM. The vaspin gene is located on chromosome 14q32.13 and consists of 6 exons and 5 introns. A single nucleotide polymorphism in intron 4 of a vaspin gene (its approved code by the HUGO Gene Nomenclature Committee is SERPINA12), vaspin rs2236242, was found to be strongly associated with diabetes [15]. The target of this study is to appraise the correlation between chemerin rs17173608 and vaspin rs2236242 polymorphism and the serum level of their corresponding adipokines, chemerin and vaspin and to assess the influence of these polymorphisms on the risk of T2DM in a sample of Egyptian population.

A total of 350 participants (181 male and 169 female) were enrolled in the study: 210 patients with T2DM and 140 age and sex matched nondiabetic healthy control subjects. 210 T2DM obese patients without complications were recruited from admitted patients of the internal medicine department of Kasr Al Ainy University Hospitals. 140 Non-diabetic subjects were randomly recruited from the local population Cairo city to act as control. They had normal fasting blood glucose levels, were not suffering any health problems, and had a negative history for T2DM and CVD. All participants gave their informed consent prior to participation, and the study was conducted in accordance with the approval of the Ethics Committee of the Faculty of Pharmacy, cairo University, Egypt.

A detailed medical history and drug treatment(s) were collected for all subjects. The following exclusion criteria were used for all study participants: Patients suffering from T1DM, insulin treatment, thyroid, hepatic, acute infectious diseases, acute or chronic inflammatory disease, autoimmune disease, any hematologic disorder (assessed by complete blood count for every participant), and cancer were excluded from this study. Both the nondiabetic control group and the diabetic group were selected to have matching BMI and had a similar distribution of sex and age. The characteristics and biochemical data of patients and healthy controls are summarized in Table 1. 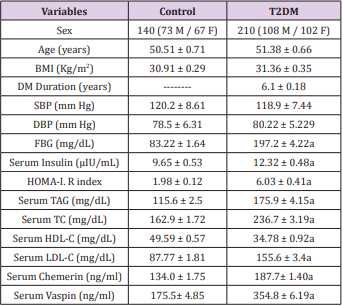 Data are given as mean + SEM

The distribution of the alleles of chemerin (rs17173608 T/G) and vaspin (rs2236242 T/A) SNPs were tested for Hardy-Weinberg equilibrium (P > 0.05). Proportions of genotypes of alleles were compared by X2 analysis, Odd ratios (ORs) and 95% confidence intervals (CI). Descriptive statistics were computed for all variables. The results were expressed as means ± SEM. Differences in serum vaspin and chemerin concentrations between individuals with different genotypes were tested by Student’s t-test. The significance level was set at 0.05 or less. All statistical analyses were performed with Graphpad prism version 5.

Table 1 represent the 350 participants which were included in the current study with their clinical characteristics and all predictable risk factors for obesity complications, such as BMI, hypertension (distinct as a systolic blood pressure (BP) 140mmHg, a diastolic BP 90 mmHg, or both), FBG, insulin, and lipid profile (TC, HDL, and TAG) (P < 0.05). As revealed in Table 1, there was no significant difference in the sex distribution, age, and BMI between the studied groups. Type 2 diabetic patients (T2DM) showed significantly higher levels of serum fasting blood glucose, serum insulin, as well as HOMA-IR compared with normal subjects. Among the lipid profiles, the levels of TC, LDL-C, and TAG were significantly higher in T2DM subjects than controls. Whereas levels of HDL-C were lower in T2DM patients than controls. In the present study the serum chemerin level in T2DM patients showed significant increase to 134.0 ± 1.75 ng/mL than the healthy control group 187.7± 1.40ng/mL (P ≤ 0.05) as well as serum vaspin levels revealed significant increase in T2DM patient 354.8 ± 6.19ng/mL in comparison to the healthy control group 175.5± 4.85ng/mL.

Results are expressed as number and in parentheses percent. P < 0.05 is considered statistically significant after adjusting for age, sex, and BMI. Chi squared (X2 ) test was performed to compare categorical data.

As illustrated in Table 3 it was revealed that serum level of chemerin in patients with TG/GG genotype in the T2DM was higher than those with the TT genotype with statistically significant difference (201 ± 0.71ng/mL and 175.5 ± 0.62ng/mL, respectively) (P ≤ 0.05). Similarly the serum chemerin level of genotype TG/GG carriers were significantly higher than that of the TT genotype in the healthy control (145 ± 0.56ng/mL and 120 ± 0.42ng/mL, respectively) (P ≤ 0.05).

Source: Data are given as mean ± SEM

Source: Data are given as mean ± SEM

In recent decades, the incidence of patients with T2DM has significantly increased. Genetic components as well as environmental factors have been reported to contribute to the development of T2DM (Ben-Haroush et al., 2004). Polymorphisms in some adipokines genes have been intensively investigated in patients with diabetes in various populations. Accordingly, our main objective was to explore the possible association between of chemerin rs17173608 and vaspin rs 2236242 genes polymorphisms with the corresponding serum levels and susceptibility to T2DM in an Egyptian population. To best of our knowledge, this is the first study that revealed the association of chemerin and vaspin polymorphism with T2DM specifically in difference to other studies which investigated the association of chemerin rs17173608 with metabolic syndrome generally. Chemerin is a newly-discovered adipocytokine, which is closely associated with the occurrence of metabolic diseases, such as type 2 diabetes mellitus, obesity and metabolic syndrome, it has been expressed in high level in white adipose [19].

It has proposed that increase of the chemerin level in insulinresistant subjects is apparently as a compensatory mechanism. In consistent with this assumption, some of studies have inspected an association between increased serum chemerin concentrations with progression of T2DM [20]. The current study revealed that serum chemerin was significantly elevated in T2DM patients compared with controls. This harmonizes with the study by Habib et al. [5], who conveyed that patients with T2DM had significantly higher chemerin levels compared with normal control individuals; El-Mesallamy et al. [21] and Weigert et al. [22] also reported the same finding. The outcomes of this study showed that the combined genotype (TG + GG) along with the minor G allele of chemerin rs17173608 polymorphism exhibited association with increased risk of T2DM in Egyptian population. These outcomes support the results of Taheri M. et al [23]. However, other studies [24] found that the G allele was associated with lower visceral adipose tissue mass in non-obese thus no relation with metabolic syndrome diseases.

Furthermore, Hasanvand et al in a recent study regarding chemerin rs17173608 polymorphism showed that genotypes and alleles were equally distributed between Gestational diabetes mellitus (GDM) and normal control groups thus no difference was found in the susceptibility to GDM in association with this variant [9]. In the present study, the carriers of chemerin rs17173608 polymorphism G allele had significantly higher chemerin serum levels, hence, the polymorphism of chemerin was correlated with its circulating concentrations, therefore chemerin rs17173608 gene polymorphism could affect the expression of chemerin and its serum level. In consistent with this hypothesis, some of studies have examined an association between increased serum chemerin concentrations with development of T2DM [11,25]. Regarding vaspin polymorphism our results indicated significantly increase in the serum levels of vaspin in patients with T2DM when compared to the normal control one in consistent with Yang et al. [26] and other studies [27,28]. While on the other side Youn et al results stated that there is no significant difference in vaspin serum levels between the control group and patients suffering from T2DM [29].

Type 2 diabetes mellitus (T2DM) is a metabolic pro-inflammatory disorder characterized by chronic hyperglycemia and alteration in circulating adipokines. Chemerin and vaspin have recently been identified as novel adipokines with high expression in adipose tissue of obese and T2DM subjects and with potentially insulin-sensitising properties. This study designed to appraise the susceptibility between rs17173608 chemerin and vaspin rs2236242 genes polymorphism and T2DM in obese Egyptian patients and to assess its influence on the serum level of their corresponding adipokines. Study was conducted on 210 T2DM patients and 140 healthy individual control. Serum chemerin and vaspin levels were measured by enzyme linked immunosorbent assay.