Cell or tissue renewal and regeneration are the two main developmental requirements of adult organisms. Both processes have as starting point a population of stem cells, normally located in a specific environment called the “niche” [1], which provides them the required signals to maintain the stemness properties, or to differentiate to the required different cell types (Figure 1). Stem cell proliferation and differentiation must be coordinated with the death of the cells that need to be replaced. In addition, processes such as cell migration, epigenetics, and cellular communication, are also necessary for proper cell renewal [2,3]. Fast renewal tissues can be recognized by a higher mitotic activity. Conversely, slow renewal tissues contain less mitosis, and may not be easily recognized from non-renewing areas which may also present some mitosis [2]. The fate decisions of stem cells during proliferation directly influence tissue renewal and homeostasis. Therefore, understanding the regulatory mechanisms that sustain a balanced cell division and differentiation is critical. Extracellular signals (e.g., tissue microenvironment, intracellular ROS, and cytokines) as well as intracellular factors (e.g., epigenetic machineries, transcription factors and DNA damage response) are responsible for the regulation of stem cell division. 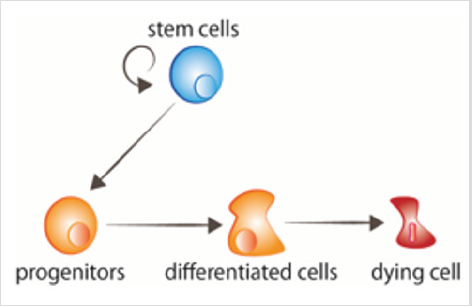 Stem cells show three possible options of division: [1] asymmetric division, in which one stem cell and one committed daughter cell are originated; [2] symmetric commitment, which yields two committed daughter cells; and [3] symmetric division, which yields two daughter cells that maintain stem cell properties [4] Figure 2. Although it could be predicted that asymmetric division is the only mechanism that enables the maintenance of a stable population of stem cells, the current data from lineagetracing experiments demonstrated that in most tissues, the balance between stem cell proliferation and the generation of differentiated offspring is achieved at the level of the whole stem cell population. The loss of stem cells due to differentiation or cell damage, induces symmetric division to fill this gap [5]. After stem cell division, the cells that follow the differentiation process pass through different stages that are defined by a combination of transcription factors that control the activity of the appropriate repertoire of genes, and allow their commitment and terminal differentiation. For each cell lineage the end product of the sequence of decisions is a specific differentiated cell type [6] Figure 3a. Under most circumstances, cellular identity - the product of normal differentiation - is stable within tissues, and its maintenance is crucial for normal tissue function. Such stability is achieved through epigenetic regulation - e.g. histone demethylation and acetylation - that results in heritable patterns of tissue-specific gene expression [3,7].

a) During asymmetric division, stem cells give rise to one stem cell, which maintains the stem cell population, and one cell that becomes committed to differentiation.

c) During symmetric division, stem cell division gives rise to two stem cells. As explained in the text, current experimental data indicates that the three modes of division can occur while maintaining the stem cell population. 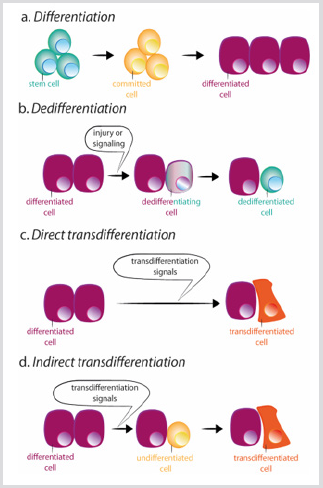 a) During normal differentiation, stem cells give rise to committed cells which in turn differentiate in different cell types.

d) During indirect trans differentiation, a differentiated cell dedifferentiates before adopting the new transcriptional program of the other cell type.

hus, the spatiotemporal control of gene expression is continuously required during animal homeostasis, and during a regenerative process. However, during regeneration, cells must re-adjust to the new situation, which requires making more profound decisions at a cellular level, often including processes of dedifferentiation and transdifferentiation that during homeostasis are scarce.

Cell or tissue renewal and regeneration are the two main developmental requirements of adult organisms.