Pathologic Fracture of a Non-Ossifying Fibroma

Non-ossifying fibromas (NOF) are benign osseous lesions that are common in the pediatric population. These fibrous lesions are mostly asymptomatic and typically no further work-up is pursued. However, different morphologic stages of a NOF have been described under the Ritschl classification and have been determined that certain stages can lead to weakened bone and potential pathologic fractures. This article will describe a case of a non-ossifying fibroma identified on x-ray with a subsequent pathologic fracture identified by magnetic resonance imaging (MRI) and discuss the implications of the findings.

The non-ossifying fibroma (NOF) is a benign osseous lesion that is a subtype within a spectrum of multiple fibrous osseous lesions. It is common within the pediatric population and some studies suggest that as much as 33% of all normal children may have one or more undetected small fibrous cortical defects [1,2]. The classic appearance of NOF on x-ray is described as a cortically-based lucent lesion with a thin sclerotic rim that are usually eccentrically located at the metaphysis of long bones. They have a benign appearance with the lack of aggressive features such as periosteal reaction, endosteal scalloping, cortical breakthrough, or an associated soft tissue mass [3]. As the name of this lesion may ironically not suggest, the fibrous defect undergoes multiple different stages to eventually become a completely ossified fibroma, making the lesion less conspicuous in the adult population [1]. In this article, we will discuss an uncommon case of a non-ossified fibroma that resulted in a pathologic fracture and what the implications of medical management are today.

A 12 year old female patient presented to the clinic for right knee pain. She was a cross country runner and had been training for a competition. The patient described waking up in the morning to vague knee pain just above the patella and has been walking with a limp for several days. Ibuprofen has not completely controlled the pain. On exam, there was pain with weight-bearing and tenderness to palpation of the distal femur but no significantly increased pain on range of motion testing. The patient was initially sent home with conservative management. However, the patient returned with worsening pain and radiographs of the right knee were ordered. On the right knee x-ray, there was a corticallybased lucent lesion within the distal femur which most likely represented a non-ossifying fibroma (Figure 1), however, the knee joint itself appeared unremarkable. Since the finding was described as a benign lesion, the primary physician pursued the reasonable approach of conservative management for the patient. However, the patient returned again with worsening pain after continued running. A subsequent MRI was performed for further evaluation. On evaluation of the MRI, there was an unexpected healing nondisplaced fracture of the distal femur that extended into the NOF (Figure 2). Follow-up radiographs and MRI was recommended and a pediatric orthopedic surgery consultation was placed. At the consultation, the orthopedic surgeons agreed with the initial assessment of a pathologic fracture from the NOF and concluded that the fracture was healing well on its own. No further intervention was made and the patient returned to normal function after 8 weeks of rest. 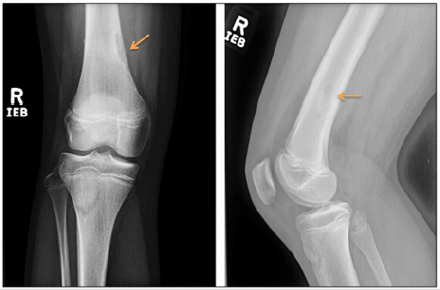 Figure 1: Anterior-posterior and lateral views of the right knee demonstrate a cortically-based lobulated lucent lesion with a thin sclerotic rim at the medial-sided distal femoral metaphysis. Additionally, there is some central sclerotic appearance at the proximal end of the lesion, suggesting partial mineralization. This is most consistent with a non-ossifying fibroma meeting the Ritschl stage B or early stage C classification, which are determined to be the most at-risk for pathologic fracture. No other suspicious findings were determined on this exam. 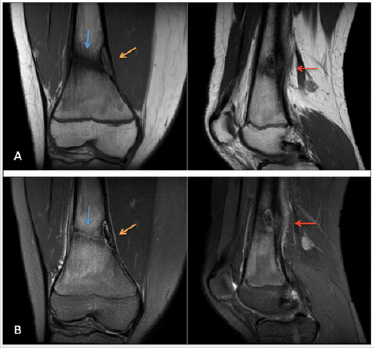 Figure 2: Coronal and sagittal images of the right knee are demonstrated on the T1-weighted (Image A) and T2-weighted fatsaturated (Image B) sequences. There is a T2 hyperintense, T1 isointense cortically-based lesion with a central low signal and peripheral low signal rim at the medial-sided distal femoral metaphysis most consistent with a stage B or early stage C NOF (orange arrow). A linear band of low signal extends nearly the entirety of the femur into the NOF (blue arrow). Additionally, there is periosteal reaction and adjacent soft tissue edema consistent with a healing insufficiency fracture (red arrow).

Non-ossifying fibromas are benign fibroblastic proliferation of cells within bone that are typically incidentally detected on x-rays [4]. On radiographs, they appear as cortically-based lucent lesions near the metaphysis of long bones. Since the majority of cases have a classic appearance and are classified as benign lesions, the NOF is considered a “do not touch” lesion, meaning they do not require bone biopsy and can be definitively diagnosed by imaging modalities alone [2]. According to Ritschl et al, a classification scheme was created that distinguishes four different stages of a non-ossifying fibroma. Stage A is described as a small, oval lucent lesion with a thin sclerotic rim adjacent to the growth plate. Stage B is described as a polycyclic, grape-shaped lesion that has moved with the growing bone towards the metaphysis and increased in size. Stage C describes a mineralisation phase, where the lesion starts to fill-in with bone starting from the diaphyseal side and extending towards the growth plate. Stage D is a completely calcified lesion that appears similar to a large bone island [1,2]. It was determined that the highest risk for pathologic fracture was seen in Stage B lesions [5,6].

Further cross-sectional imaging with MRI is not typically warranted for diagnosis but may be considered when a patient presents with persistent pain. According to prior studies, if the NOF occupies greater than 50% of the bone in both transverse and anterior-posterior planes and has a vertical length exceeding thirty-three millimeters, this is at increased risk of a pathologic fracture and may be considered for close follow-up [7]. These findings ultimately highlight the major teaching point for primary care physicians and radiologists, that not all non-ossifying fibromas are to be dismissed as an unremarkable lesion on radiographs alone. The clinical history and morphology of the lesion may make a significant difference to a young, active patient. Considering the different classification stages and being aware of the potential for pathologic fracture is essential for proper management of these lesions.

Non-ossifying fibromas (NOF) are benign osseous lesions that are common in the pediatric population. These fibrous lesions are mostly asymptomatic and typically no further work-up is pursued. However, different morphologic stages of a NOF have been described under the Ritschl classification and have been determined that certain stages can lead to weakened bone and potential pathologic fractures. This article will describe a case of a non-ossifying fibroma identified on x-ray with a subsequent pathologic fracture identified by magnetic resonance imaging (MRI) and discuss the implications of the findings.