An Approach for Fast Segmentation of Lung Cancer Images

2Department of Computing and Mathematics, Brazil

3Institute of Engineering of Coimbra, Portugal

The lung tumor is a leading cause of death worldwide. This type of disease in which there is uncontrolled progression of abnormal cells in the lung. To quantify these carcinogenic structures in the lung, medical images such as Computed Tomography (CT) and Magnetic Resonance Imaging (MRI) are used, enabling preoperative planning and treatment, however, lung tumor segmentation is a challenging. The method illustrated in this review is based on the region growing techniques and the results obtained are motivating, finally, a statistical analysis and a graphic demonstration of the proposed algorithm are presented.

The lung tumor is a leading cause of death worldwide. This type of disease in which there is uncontrolled progression of abnormal cells in the lung, when untreated, can extend through the process of metastasis in nearby tissues and in different parts of the body [1]. According to the study discussed in [2], the majority of lung cancer cases occur through cigarette use. As a curative approach it is usually recommended to combine radiotherapy and chemotherapy, in other hands, the earlier the tumor identification the better the patient’s survival rate [2,3]. To quantify these carcinogenic structures in the lung, medical images such as Computed Tomography (CT) and Magnetic Resonance Imaging (MRI) are used, enabling preoperative planning and treatment, however, lung tumor segmentation is a challenging. In order to solve the challenge of segmentation of images, several algorithms in the literature are illustrated, among them, there are methods that use adaptive threshold [4-8], fuzzy models [9-11], region growing [12-14]. Motivated by these studies the present review seeks to illustrate the development of a new combined method for fast segmentation.

The method illustrated in this review is initially based on the region growing techniques present in 3D Slicer [15]. Known as Grow Cut [16], this algorithm uses cellular automata to identify neighboring pixels and tag them with an ID equal to the seed points given at the beginning of the algorithm. For this, this method requires the marking of foreground and background seed. Usually the background seed should mark a closed outline around the target area (foreground seed), so the algorithm will run until all pixels that have similarity with target points are marked. However, noting that all pixels will be visited during each iteration, the complexity grows rapidly as a result of the increase of the image size, reducing its applicability for 3D image segmentation. In order to improve the Grow Cut results, a modification of its implementation was proposed in [17]. The algorithm called Fast Grow Cut solved the runtime challenge using a method based on graph algorithms more specifically known as Dijkstra, in which it is able to calculate the minimum cost path between the vertices of a graph, thus generating a good performance of execution. However, these two versions created for image segmentation sometimes result in parts of the segmented structures that generate rough structures when they are illustrated in 3D, in addition, these methods do not automatically generate 3D visualization at the end of its execution, forcing the user to do it manually later.

In our method, initially only seed foreground image (SF) is required. From this image, its marked target coordinates are extracted, these coordinates are stored and subsequently used as indices for extracting pixel values from the input image (I) to be segmented at the same point. Thus, two vectors are created, the first, corresponding to the target zone coordinates (TZC) and the second, containing the corresponding pixel values (CZV). Parallel to this, the image that will be used as output (S) is created by cloning SF to ensure the same dimensions in the images. After this step, a range with the highest and lowest value is identified and created by applying histogram in CZV. When creating the initial vectors, as well as the cut range, the algorithm starts the iteration of region growing, checking at the beginning if it is already at the edge of the image (edges), if this occurs, the algorithm ends, otherwise the algorithm proceeds to capture an adjacent voxel (AV) in I, picks up its values, coordinates and enters a new test case. If the AV values are within the range created initially, it will have its indices stored in a new vector (NV), but if there is no new voxel detected within the range then the algorithm is terminated.

On the other hand, if there is, the algorithm executes an interaction in NV taking its matches which are later used to capture the voxel in S by storing it in a local variable (LA). In this sense, after this step, the NV coordinates are used to obtain the value of the pixel in this string in I by storing it in (LV) and the voxel in I by storing it in (LB). After these two steps, a product is executed between LA and LB, then a local cut range is created, taking the lowest value and the largest of the result of the previous product, if LV is between this range, then S in the NV is marked, the pass to next iteration. At the end of the growing method, a border smoothing is performed. For this smoothing to be performed, it is iterated in all slices. Each slice is converted to binary image, then this slice goes through a binary threshold isolating the area of interest and its result is smoothed shortly after combining two techniques of mathematical morphology, opening and closing, respectively, with an elliptical structuring element size (5x5). After of this step the result is converted back to the initial image format and demonstrates through the modules available in the 3DSlicer, the 3D reconstruction of the segmentation results automatically. 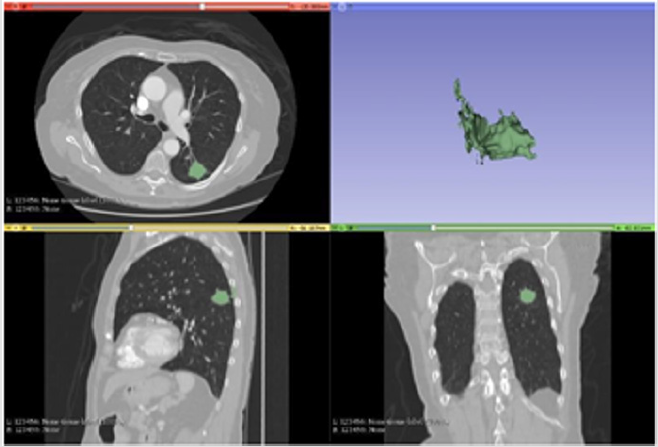 Note: The Figure 1 demonstrates the segmentation result of the Grow Cut method. In addition to the runtime being the largest among the tests as illustrated in the previous table, its segmentation process captured many artifacts outside the target area expected in the test in question, generating a 3d with a less accurate tumor structure. 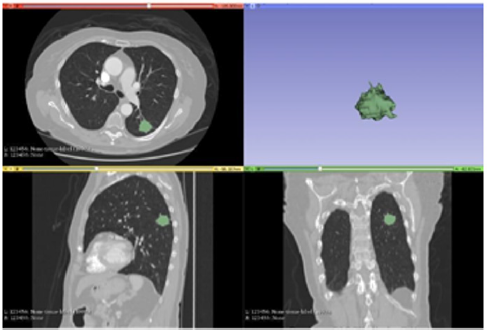 Note: The Figure 2 demonstrates the segmentation result of the Fast Grow Cut method. This method was able to perform the task reducing the time required drastically and is shown with very few false positives, however it is necessary to manually generate by other modules the resulting 3D. 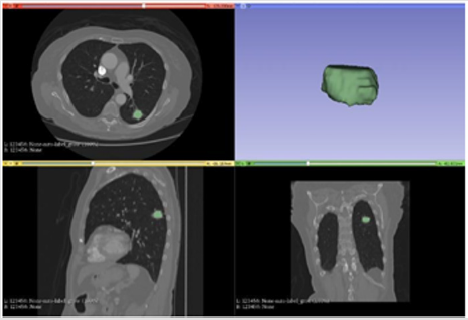 Note: The Figure 3 illustrates the result of the proposed algorithm. a particularity of this algorithm is given by the automation of the whole process, from the marking of the area of interest at the beginning all the remaining process until the 3D illustration is done automatically, in other hands the algorithm was also able to reduce the time for the execution of the segmentation task even more, staying in fast 2s.

With the introduction of the new method it is evident that it has potential for improvement in the resolution of the proposed task, making the result more quickly and with simple use. Compared to two other algorithms it has been shown to be faster in the segmentation process, it has automatic 3D visualization generation, but it is still feasible to improve in some sections.

There are several techniques for segmentation of medical images, this study seeks to demonstrate a new algorithm developed. The efficiency of the work developed is due to the automation of processes and the reduction in the cost of time for execution. The study of the method could generate more advances, generating a better performance for segmentation. The disadvantage is the loss of some structures due to the currently developed smoothing technique, in this sense, an optimization is proposed initially in this process. However, the process of smoothing is still very aggressive even removing structures beyond only noisy imperfections, it is proposed at the moment to improve this process. As additional information, but not little relevant to the project, the execution of the complete method until the 3D generation takes about 8s. The tests were performed on a Notebook with Intel Core i3 2GHz 4GB RAM.

This work is financed by the National Funds through the FCT - Fundação para a Ciência e a Tecnologia (Portuguese Foundation for Science and Technology) as part of project UID/EEA/00760/2019.

An Approach for Fast Segmentation of Lung Cancer Images

2Department of Computing and Mathematics, Brazil

3Institute of Engineering of Coimbra, Portugal

The lung tumor is a leading cause of death worldwide. This type of disease in which there is uncontrolled progression of abnormal cells in the lung. To quantify these carcinogenic structures in the lung, medical images such as Computed Tomography (CT) and Magnetic Resonance Imaging (MRI) are used, enabling preoperative planning and treatment, however, lung tumor segmentation is a challenging. The method illustrated in this review is based on the region growing techniques and the results obtained are motivating, finally, a statistical analysis and a graphic demonstration of the proposed algorithm are presented.