Radiotherapy is one of the main treatments for cervical carcinoma, which can effectively control the development of cancer and prolong the survival time of patients. With the prolongation of survival time of cervical carcinoma patients, the long-term complications caused by radiotherapy, including radiation proctitis, radiation cystitis and bone damage after Intensity modulated radiotherapy, have attracted increasing attention. In this paper, a case of cervical carcinoma fracture after radiotherapy was reported, and the related literature was reviewed. The purpose was to explore the criteria and influencing factors of pelvic insufficiency fracture.

A 62-year-old patient who menopause in 2006 and had no discomfort such as vaginal bleeding or fluid after menopause. From August 13, 2016, she started with a small amount of vaginal bleeding, no vaginal discharge, without other discomforts. Cervical biopsy pathology suggested cervical squamous cell carcinoma, the stage is I B2. This patient received intravenous chemotherapy with TP regimen (paclitaxel 240 mg + cisplatin 120 mg D1-2) on August 19, 2016 and September 9, 2016 respectively. From October 12, 2016 to November 21, 2016, the patient received 25 times of pelvic Intensity Modulated Radiation Therapy (IMRT), GTVnd1: paraaortic lymph node; GTVnd2: Paravenous lymph nodes of inferior vena cava; GTVnd3, 4: Obturator lymph nodes both left and right, CTV: Drainage area of pelvic lymph nodes, include: from Inferior border of L1 to Drainage area of lymph nodes in inferior margin of obturator: Lymph node drainage area of para-abdominal aorta, lymph node drainage area of obturator, Lymph node drainage area of internal iliac artery, Lymph node drainage area of external iliac artery dose PGTVnd1,2,3,4: 6000cGy/25,PCTV:4500cGY/25 ，Controlling rectal dose V30 less than 50% Bilateral femoral head V30 less than 50%,Bladder V30 less than 50%; She received 40 mg nedaplatin concurrent chemotherapy in 2016- 10-18 during radiotherapy and four times of brachytherapy after radiotherapy(2016-11-15,2016-11-22,2016-11-25,2016-11-29). The patient was discharged after completing all the treatment and regularly reviewed complete abdominal MRI regularly in2017- 02-27, 2017-06-05, 2017-09-05, 2017-12-04, 2018-3-16, 2018- 6-22and2018-3-16. Diagnostic opinion: Cervical morphology slightly enlarged, a small amount of pelvic effusion, the signal is slightly uneven, all considering the changes after radiotherapy, no clear signs of recurrence and metastasis were found. The patient began to suffer from hip pain in August 2018 and bone metastasis was not completely ruled out by complete abdominal MRI. No abnormalities were found in the related cancer indicators. For definite diagnosis, PET-CT was performed Radioactive uptake of lumbosacral vertebrae and residual pelvic bones was sparse and decreased, which was changed after radiotherapy.

The bone density of the right sacroiliac joint was uneven, showing patchy slightly high-density shadow and patchy osteolytic low-density focus. The image showed increased radioactivity uptake of the focus, SUVmax: 5.16, longitudinal cable-like distribution along articular surface. Diagnostic Opinion: No clear signs of residual or recurrent tumors were found in cervix. Metabolism of lumbosacral vertebrae and residual pelvis was sparse and decreased, which was changed after radiotherapy. Local bone changes and increased metabolism of the right sacroiliac joint under the sacral articular surface and the right side of the S2 vertebral body were considered as pelvic insufficiency fracture. Exclude the possibility of bone metastasis and considered hip pain caused by insufficiency fracture.

For patients with cervical cancer, radiotherapy can effectively reduce the recurrence of tumors and prolong the survival time of patients, regardless surgery or not. But radiation proctitis, radiation cystitis and insufficiency fracture after radiotherapy have a great impact on the quality of life of patients. In this case, the patient felt hip pain two years after radiotherapy, and bone metastasis could not be excluded by total abdominal MRI. For definite diagnosis, PET-CT showed Pelvic Failure Fracture (PIF) (Figures 1 & 2). Insufficiency fracture is a kind of stress fracture, it occurs mostly in bone tissue with reduced bone mineral content and reduced bone elastic resistance. It often occurs under normal stress [1]. Reasons for impaired bone elastic resistance include: Osteoporosis, Radiation and Hormone Therapy, Rheumatoid Arthritis, Paget’s Diseases, hyperparathyroidism, rickets, etc. [2]. PIF has no typical clinical symptoms, no obvious history of trauma, and complex pelvic structure, which often leads to missed diagnosis and misdiagnosis. 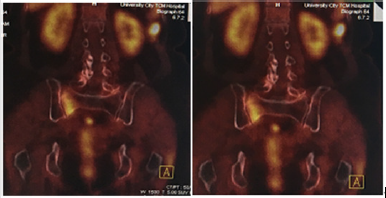 Insufficiency fracture should be differentiated from other bone diseases, bone metastases are mostly sporadic, with uncertain size, shape and location.

Insufficiency fracture is the mainly located in the load-bearing area, the distribution is bilateral and symmetrical, in which “serpentine” can be seen Fracture line, the symptoms of fracture are mild and have its specific site of onset. Other benign and malignant bone tumors, such as osteosarcoma and osteoid bone tumors, giant cell tumors of bone and chordoma are less symmetrical. It can be differentiated by clinical symptoms and imaging examination. Clinically, it is not uncommon to have insufficiency fracture after radiotherapy, however, the current understanding of post-radiotherapy insufficiency fracture is insufficient, often lead to misdiagnosed as bone metastasis or infection. Several studies investigating the incidence of and risk factors for PIF have shown wide incidence rates ranging from 1.7% to 89% in patients undergoing treatment of gynecologic, rectal, or prostate cancer. PIF is closely related to elderly women, menopausal status, glucocorticoid use, osteoporosis and so on. More and more studies show that radiotherapy can also lead to PIF. Most PIF occur in the sacrum, sacroiliac joint and iliac bone and some occur in other parts [3-5].

Anne Ramlov MD considered that PIF is common after treatment of LACC and is mainly seen in patients aged >50 years and not related to lymph node boosts but rather to dose and volume associated with irradiation of the elective pelvic target. Reducing the prescribed elective dose from 50 to 45 Gy may reduce the risk of PIF considerably [9]. Many studies have shown that osteoporosis and postmenopausal status are important causes of insufficiency fracture, and osteoporosis is the most fundamental cause. Radiotherapy is an important inducing factor. On the basis of osteoporosis, it can aggravate the occurrence of insufficiency fracture. Blom lie reviewed 121 cases of sacral failure fracture reported in the literature, 60% of which were caused by local radiotherapy, but 95% of them occurred in elderly women after amenorrhea [10]. Mehmood Q consider that chemotherapeutic drugs can cause bone loss and reduced bone mineral density while treating gynecological tumors which increases the risk of fracture [11].

Radiotherapy is one of the main treatments for cervical carcinoma, which can effectively control the development of cancer and prolong the survival time of patients.