An Occult Case of Worsening Dyspnoea in Adult Affected by Anatomic Abnormalities of Oral Cavity: A Case Report

Aspiration of foreign bodies (FBs) occurs frequently in children and most of all occurs in children of about three years old [1]. However, FB aspiration can occur in adults and elderly people [2] but the real incidence is not known. The nature of foreign bodies aspiration in adult population is usually related to eating habits and the clinical presentation depends on the site of FB impaction. Bronchial aspiration usually presents as an acute event, but sometimes it may manifest itself insidiously making diagnosis very difficult. Since the improvement of both rigid and flexible bronchoscopes, the survival is good and morbidity is low [3]. Here we report a case of patient affected by tongue cancer who inhaled a 6 cm foreign alimental body and was admitted to the emergency department two day after the aspiration presenting non-specific symptoms. 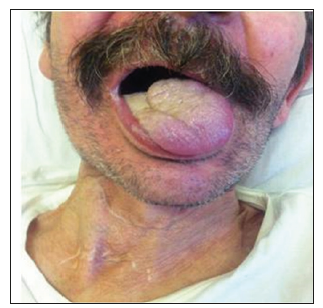 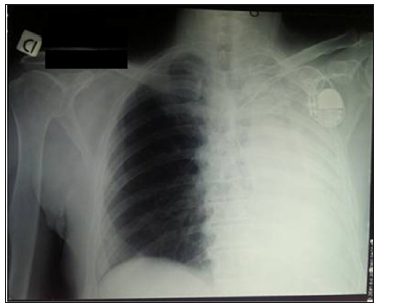 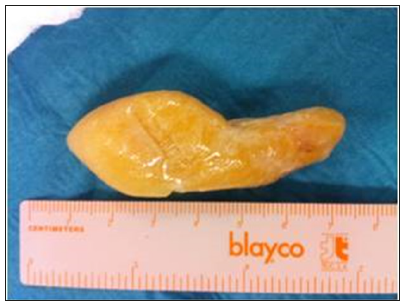 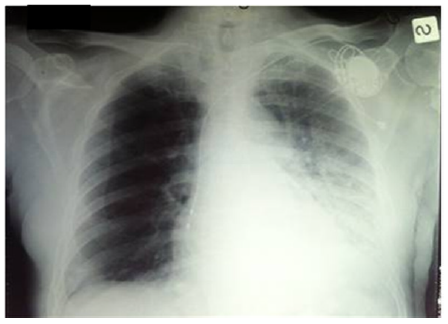 Immediately, the patient presented arterial oxygen saturation of 90% and stable vital signs. Preliminary flexible fibreoptic bronchoscopy was performed at 5 pm. Procedure was performed after that Lidocaine 1% was used as a topic anesthetic and sedation was induced. The preliminary fibreoptic bronchoscopy revealed a foreign body that occluded the left main bronchus. Subsequently, an operating bronchoscopy was performed and the foreign body was removed easily because during the procedure, a fit of coughing pushed the foreign body to the higher respiratory airways. The foreign body removed was a 6 cm dry apricot that patient did not refer to have eaten at the moment of the admission (Figure 3). After the operating bronchoscope, patient presented a slow resolution of dyspnea. A second CXR was performed 30 minutes after the endoscopic procedure (Figure 4). The mediastinal structures were aligned, partial clarification of the respiratory field and clear reduction of massive atelectasis were evident. The arterial blood gas analysis showed: pH 7.51; PaCO2 26.3 mmHg; PaO2 70.0 mmHg; arterial oxygen saturation of 95.5%; lactates 1.0 mmol/L; HCO3- 21.4 mmol/L; BEecf -1.8 mmol/L; PaO2/FiO2 334.6 mmHg. Patient was then admitted to the pulmonology ward. Antibiotic prophylaxis was prolonged during the hospitalization (Ceftriaxone 1 g/die;

Aspirated foreign bodies (FBs) continues to present challenges to doctors. The nature and spectrum of aspirated FBs differ according to age, sex, life style, and eating habits. It is more common in children who explore the world by introducing the objects in their mouths and do not have premolars or molars to grind smaller inhalable pieces [4]. Furthermore, they have an immature protective cough reflex, compared to adults. Young children usually inhale object like toys or other household items. On the contrary, bronchoaspiration of foreign body in adult is not common but in case of abuse of sedative medications, alcohol consumption, neurological disorders (vascular dementia, Parkinson’s), poor dentition and/or mental retardation, it could be frequent [5-7]. Elderly people usually inhale organic material. Common early signs and symptoms of aspiration may include dyspnoea, coughing, inspiratory stridor, cyanosis and decreased oxygen saturation, but they may manifest themselves insidiously.

Often, adults do not spontaneously report the episode of choking and the finding of the FB may be fortuitous when bronchoscopy is performed because of chronic symptoms such as cough, hemoptysis and repeated or prolonged pneumonia [8]. Non-specific symptoms can delay the diagnosis increasing patient’s risk of important complications. In fact, FBs represents a medical emergency in all ages with serious and potentially lethal consequences such as vocal cord paralysis, abscess, infection, pneumothorax that sometimes can lead to loss lung tissue and to death [9-10]. Our patient presented vague symptoms and did not spontaneously report significant anamnestic information probably because he did not realize to have inhaled a foreign body. He was admitted to our emergency department two day after the aspiration. The patient presented significant story of alcoholism and he presented anatomic abnormalities of oral cavity conditioning chewing due to the previous tongue operation.

Probably, these conditions influenced his capacity to swallow. The foreign body can impact at any site from the laryngeal inlet to the terminal bronchioles. Its location is strictly correlated with patients’ age. In fact, the main stem bronchi diverge from the trachea with different angles increasing age. According to this divergence, the right main stem bronchus aligns with the trachea making a relatively continuity from the larynx to the right bronchus. Therefore, the inhaled objects are more commonly found in the right than the left side of the bronchial tree [11-13]. Accordingly, chest radiography should be performed every time in suspect of foreign body aspiration because more than 90% of foreign bodies are radiolucent. Before the introduction of modern respiratory endoscopy techniques, the mortality rate due to aspiration of FBs aspiration was around 24% [14]. Currently, bronchoscopy should be performed in all cases of suspected FB aspiration, even if the radiological findings are normal [15-16].

Flexible brochoscopy is considered the gold standard in diagnosis and treatment of FBs although serious complications, such as mediastinal emphysema, atelectasis, pneumothorax, and tracheoesophageal fistula, have been reported after bronchoscopy [17-18]. Therefore, patients should be initially submitted to flexible bronchoscopy to locate the foreign body in the tracheobronchial tree, evaluate the degree of inflammation or suppuration of the bronchial mucosa, and choose the equipment that was necessary for therapeutic measures and then underwent therapeutic bronchoscopy. Surgical treatment should be reserved for cases in which bronchoscopy is unsuccessful or there are irreversible bronchial or lung complications.

Broncho aspiration of foreign body in adult is not common. It could be frequent in some group of patients such as people affected by abuse of sedative medications, alcohol consumption, neurological disorders, poor dentition and/or mental retardation. Anatomic abnormalities of oral cavity can condition the swallow process increasing the probability of foreign body aspiration. Clinical presentation can manifest itself insidiously and the diagnosis can be delayed amplifying patient’s risk of important complications. Currently, preliminary and operating fibreoptic bronchoscopy are considered the gold standard to treat patients affected by foreign body aspiration. Endoscopic procedure should be performed in all cases of suspected foreign body aspiration.

An Occult Case of Worsening Dyspnoea in Adult Affected by Anatomic Abnormalities of Oral Cavity: A Case Report

Aspiration of foreign bodies (FBs) occurs frequently in children and most of all occurs in children of about three years old [1]. However, FB aspiration can occur in adults and elderly people [2] but the real incidence is not known.