Effect of Hyperlipidemia on Cell Mediated Immunity; Could it be as Predisposing Factor of Cancer Risk?

Background: The relationship between obesity and some diseases proposes a main interaction among the host lipid metabolism and immune system. On the other hand, inflammation and remarkably cytokines play a key role in defense against pathogenesis and tumor initiation.

Objective: In this project, we aim to investigate the effects of hyperlipidemia on Th1 differentiation, expression of Th1 secreted cytokines and the risk of cancer.

Methods: PBMCs were isolated from whole blood of 40 hyperlipidemia patients and 40 normal volunteers. After synthesizing cDNAs from total mRNAs, real-time PCR was performed for IL-2, IFN-γ, TNF-α cytokines, T-bet transcription factor and β-actin (as an internal control). The expression ratios were analyzed in hyperlipidemia patients in comparison with the normal group.

Hyperlipidemia, increased serum cholesterol and triglycerides, as a metabolic disease results from impaired lipid metabolism by excessive intake of cholesterol or genetic deficiency. High blood cholesterol levels are caused by kidney diseases, diabetes, medication side effects, hypothyroidism, metabolic syndrome, Polycystic Ovary Syndrome (PCOS) and Cushing’s syndrome [1,2]. Hyperlipidemia not only causes the progress of atherosclerosis primarily as a result of increased serum cholesterol levels, but also leads to systemic inflammation that can be effective on disease development [3-5]. A variety of studies reported the effects of dietary fats on diseases such as age-related memory loss [6], infertility and endometriosis [7,8], multiple sclerosis [9], breast cancer [10,11], prostate cancer [12], colon cancer [13] and non-Hodgkin’s lymphoma [14]. The immune system is a complex array of organs, tissues and specialized cells that protects us from outside invaders and tumor initiation in body. Studies to determine which metabolic disorder or combination of disorders in obese people increases their cancer risk have been inconclusive [15]. High level serum lipids lead to altered rates of cholesterol in the cell membrane and cytoplasm of macrophages. Therefore, hyperlipidemia might inhibit innate immune responses, cytokines release and inflammatory response and impair proper immune response to bacterial challenge [16] and increase risk of cancer [17,18].

On the other hand, in vitro studies show an increase in the number of IL-4 producing Th2 cells [19] and a decrease in Th1 response and cell immunity in ApoE-/- mice [20-22]. By the measurement of cholesterol levels in patients with superficial esophageal cancer, Akihiro Sako et al. suggests that high levels of serum lipid might provide suitable conditions for the progress of lymph node metastasis in the early stage of esophageal cancer [23]. In contrast, some previous studies demonstrate low serum levels of cholesterol and Triglycerides (TG) could lead to cancer morbidity [24,25]. Although all the studies about the effects of hyperlipidemia on immune response were dispersed, its relation to cancer is still controversial. We hypothesized that hyperlipidemia could reduce Th1 related cytokines and increased risk of cancer in human. For considering this purpose we decided to investigate the effect of high level of cholesterol and LDL on cell mediated immunity and expression of Th1 related cytokines in human.

Forty untreated hypercholesterolemia patients in the clinic department of Hazrat Rasoul hospital and forty healthy individuals joined this study. The diagnosis of hypercholesterolemia was based upon an appropriate clinical history and measurement of LDL rate per weight. They all gave written informed consent and the local ethics committee approved the study protocol.

The patients who smoked or had other current inflammatory, infectious diseases or neurological disorder, cardiovascular, diabetes and allergic diseases were excluded from the study. The control group were healthy individuals and they had no other hyperlipidemia diseases (Table 1).

The total cellular RNA was extracted from PBMC by High Pure RNA Isolation Kit (Roche, Germany) according to the manufacturer’s instructions. To normalize RNA concentration, we measured its absorbance by using the Nano Drop 2000 instrument (Wilmington, USA) at 260 nm. The RNA (400 ng/μl) from each sample was used to synthesize the first-strand cDNA by the cDNA synthesis kit (Fermentase, Germany). Similarly, cDNA synthesis was carried out based on the manufacture’s protocols. Ultimately, the cDNA samples were kept at -70oC until we used them for PCR.

Primers were designed using oligo7 software. To exclude amplification of genomic DNA and pseudo genes we confirmed the validity of the primers by blasting (Table 2). A common PCR technique was carried out for all samples in a final volume of 20 μl with master mix PCR (Cinnagen, Tehran, Iran). Then the samples were loaded on a 1.5% gel. Real-time-PCR was performed with SYBR® Green fluorescent dye (Light Cycler Fast Start DNA Master Plus SYBR Green I, Roche, Germany) to scan cDNA amplification by binding only to double stranded DNA and its fluorescent intensity was identified by Rotor gene (Termocicler Rotor-Gene™6000 Corbett Research/ Australia). The melting curve analysis showed only one peak for each reaction and this was also confirmed by electrophoresis of PCR products that showed only one band of the expected size.

Data output from LinReg PCR software such as Cycle of threshold (Ct) and efficiency of each reaction were imported to Relative Expression Software Tool 2009 version (REST 2009). 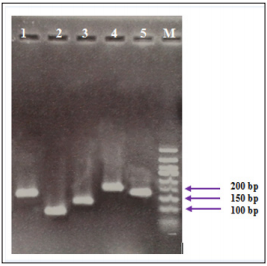 In order to investigate the effect of Hypercholesterolemia on Th1 related cytokines, the mRNA expression levels of IL-2, IFN-γ and TNF-α cytokines were measured by real time PCR. As reference gene for loading we used the housekeeping gene β-actin. The results showed a significantly decrease in mRNA expression of IL-2, IFN-γ and TNF-α cytokines by 0.056, 0.310 and 0.285 respectively. The differences of cytokines and transcription factor of the patient’s group in compared with healthy individuals were statistically significant (P≤ 0.006) (Table 3) (Figure 2). 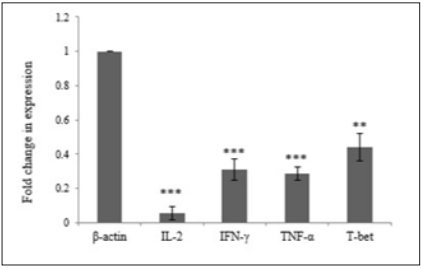 Dyslipidemia, in particular high cholesterol and hyperlipidemia is considered as an important metabolic disease throughout the world that is significantly associated with inflammation [26,27]. Hyperlipidemia begins partial inflammation by change of leukocyte activity and disrupting cytokine regulation, which worsens over time. Many studies have reported the effects of hyperlipidemia and dietary fats on immune responses, however, many of them have been carried out on animal models with focus on innate immunity. A deeper understanding of hyperlipidemia effects on the immune system will provide a more comprehensive investigation of the health risks of hyperlipidemia and risk of infectious diseases and cancer. In order to get an understanding of hyperlipidemia on the cell mediated immunity, we investigated the effect of high level of cholesterol and LDL on the Th1 cell differentiation.

Many studies have reported weakened immune defense for ApoE-/- hypercholesterolemic mice against Candida albicans [28], Listeria monocytogenes [29], Klebsiella pneumonia [30] and Lymphocytic Choriomeningitis Virus (LCMV) infection [31]. In 1998 and 2009, Zhou X et al. [20] reported that hypercholesterolemic mice shift the T lymphocyte response towards Th2 and the percentage of IL-4- versus IFN-γ-producing cells in the spleen augmented with enhancing levels of cholesterol [20,22]. Narasimha Rao et al. and other researchers showed that high level of LDL cholesterol leads to an increase of IL17 secreting CD4 cells and decrease of regulatory T cells in the spleen but has no effects on IFN-γ secreting CD4 cells [32]. Mailer RK et al. [33] in 2017 reported that increased TCR signaling in high-cholesterol dieted mice did not change the expression of activation markers or differentiation of T cell subsets except for Treg cells [33]. Similar results were reported by other researchers [34-36]. Jonathan D. Proto in 2018 demonstrated that reasonably high plasma cholesterol can disturb human T cell homeostasis in vivo [37]. In the present study, high level of cholesterol and LDL decreased expression of Th1 related cytokines such as IFN-γ, TNF-α, IL-2 cytokines and T-bet transcription factor.

T-bet is an important transcription factor of Th1 related cytokines and in differentiation of Th0 to Th1. Our results agree with the report of Lei et al. [16] concerning the decrease of TNF-α and IL-6 in ApoE-/- hyperlipidemic mice [16]. IL-2 is required for initiation of effector functions thereby regulating T-cell-mediated immune responses and plays a critical role in the activation of immune system that can help to destruction of the cancer cells. As immunotherapy, IL-2 can use for tumor regression and was approved for metastatic renal cell carcinoma and metastatic melanoma by FDA [38]. Interferon gamma (IFN-γ), a cytokine secreted by activated T cells and natural killer cells, by regulating T cell responses, especially Th1 cells, can affects on tumor rejection [39,40] while loss of IFN-γ lead to impair antitumor T cell response and allow tumor cell growth [41]. Moreover, IFN-γ can inhibit the production of angiogenic factors by tumor cells, promote the production of antiangiogenic factors by host stroma cells in vivo and result in inhibit the tumor-induced angiogenesis [42]. Th1 cells effect in the upgrade and conservation of anti-tumor cytotoxic CD8+ T lymphocytes responses and also employees several cells of innate and adaptive immunity to tumor sites and stimulate their activation by secretion of IFN-γ [43].

Also, IFN-γ enhance immunogenicity of tumor cells via upregulation of the antigen-presenting MHC molecules membrane expression on the tumor cells and makes them more susceptible to immune recognition and destruction [44]. This cytokine inhibited proliferation of tumor cells by up regulation of p21 and p27 molecules to arrest the cell cycle [45,46]. TNF-α can initiate diverse forms of programmed cell death including apoptosis and necroptosis in tumor cells [47]. Up regulation of TNF-α can led to killing tumor cells in in vitro systems and in animal models [48]. Collectively, Th1 related cytokines such as IL-2, IFN-γ and TNF-α was shown to use its potent anti-tumor effect via modulating immune cells, tumor cells and/or non-immune stromal cells in tumor microenvironment. On the other hand, in the present study, high level of cholesterol and LDL decreased expression of IFN-γ, TNF-α, IL-2 cytokines and T-bet transcription factor that might inhibit innate immune responses and can increase the risk of cancer. This effect of hyperlipidemia is perhaps caused by changes of the cholesterol concentration in the T cell membrane resulting in interference of the TCR signaling cascade as shown by in vitro studies earlier [49]. These findings raise the possibility that the suppressive effects of LDL-cholesterol on the immune system might facilitate the survival of cancer cells in body

This project was supported by the grant of Center for International Scientific Studies & Collaboration (CISSC) and National Institute for Genetic Engineering and Biotechnology (NIGEB). We also thank Professor Hannes Stockinger, Medical University of Vienna, Austria for his generous support.

Effect of Hyperlipidemia on Cell Mediated Immunity; Could it be as Predisposing Factor of Cancer Risk?

Background: The relationship between obesity and some diseases proposes a main interaction among the host lipid metabolism and immune system. On the other hand, inflammation and remarkably cytokines play a key role in defense against pathogenesis and tumor initiation.

Objective: In this project, we aim to investigate the effects of hyperlipidemia on Th1 differentiation, expression of Th1 secreted cytokines and the risk of cancer.

Methods: PBMCs were isolated from whole blood of 40 hyperlipidemia patients and 40 normal volunteers. After synthesizing cDNAs from total mRNAs, real-time PCR was performed for IL-2, IFN-γ, TNF-α cytokines, T-bet transcription factor and β-actin (as an internal control). The expression ratios were analyzed in hyperlipidemia patients in comparison with the normal group.