Swallowed foreign bodies are common entity in our practice especially in children. Most ingested objects pass smoothly through the gastrointestinal tract or endoscopic ally removed. However, some patients experience undesirable outcomes We reported 3 cases under one year old (1 female, 2 males) brought to our ENT emergency by history of unusual ingested foreign body (Okra-pod); they were presented with severe illness, acute respiratory distress and aspiration pneumonia with respiratory failure in one case; Urgent endoscopic removal was done in all cases and postoperative monitoring was performed in Pediatric Intensive Care. Two cases were managed effectively and followed up until completely cured but dramatically one infant has died due to potentially late diagnosis and respiratory failure. To our knowledge, this foreign body has not been reported before. Okra is considered a possible cause of exogenous lipoid pneumonia as it liberates a considerable amounts of oily substance with subsequent aspiration into the respiratory passages. Early diagnosis, immediate endoscopic removal, appropriate postoperative care and follow up are mandatory in to prevent life-threatening complications, particularly respiratory failure.

Foreign body (FB) ingestion is a relatively common clinical emergency in pediatrics. Most FBs can pass or be managed uneventfully through the gastrointestinal tract; however, some FBs can cause significant morbidities and mortalities [1]. We reported three cases with unusual swallowed FB (Okra pod) presented with acute respiratory distress.

A 4 months female baby was brought to our ENT emergency unit in a tertiary referral hospital with a 4-hour history of acute respiratory difficulty. Her mother told us that her daughter has ingested a raw okra pod. She found her child coughing with choking, gagging and drooling a bloody froth from her mouth. Subsequently, the breathing became noisy. On examination, the baby was febrile, with moderate to severe respiratory distress. There was suprasternal and intercostals in drawing on inspection with working accessory muscles of respiration. Auscultation revealed bilateral expiratory rhonchus and aspiratory fine wet crepitating scattered over the chest. She was rapidly transferred to the operative theatre (OR) for an urgent endoscopic intervention under general anesthesia. Laryngoscope showed that larynx was pushed a territory and Okra was lodged posterior in the cricopharyngeal sphincter. Successful removal via hypopharyngoscopy was achieved. Postoperatively; the patient was monitored and managed in our department inpatient for 12 hours without improvement of the general condition. Later on, she was transferred to the Pediatric Intensive Care Unit (PICU) for more help. Aspiration pneumonia was diagnosed and the patient was in a bad general condition. Unfortunately, she died in the next day.

Figure 1: Okra pod is filling or pharynx with upper part passing behind uvula and lower end in post-cricoids area. 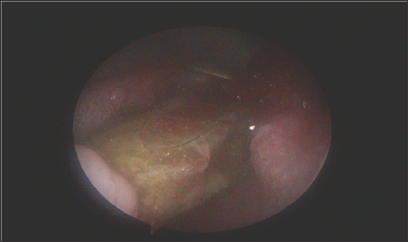 Figure 2: Mucosal erosions in or pharynx and post-cricoids after FB removal. 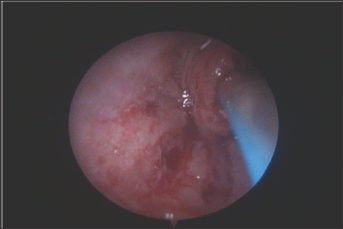 FB ingestion occurs in more than 80% of the pediatric population, particularly under 5 years of age [2]. The types of ingested FBs differ according to feeding habits and sociocultural properties. However, coins were the most common type [3]. Vegetable FBs are considered dangerous; squeezed and dissolve to liberate irritant oil leading to intense inflammatory reaction [4]. We presented 3 cases of Okra pod FB impaction. It was suggested that Okra seeds can be subjected to oil extraction for additional benefits [5]. To the best of our knowledge, similar cases have never been reported. Exogenous lipoid pneumonia (ELP) is a rare non-infectious inflammatory lung disease caused by inhalation or aspiration of a fatty substance. It was first described by Laughlin in 1925 [6]. Exogenous oil aspiration suppresses the cough reflex and the normal mucociliary clearance, thus affecting the main primary defense mechanism. The vegetable oils are not hydrolyzed by lung lipases. So, it induces a 'foreign body' response [7].

Diagnosis is based on a history of oil exposure, characteristic radiological endings, and presence of lipid-laden macrophages on sputum or bronchi alveolar ravage (BAL) [8]. Clinical manifestations of LP are greatly different, depending upon tissue reaction to exogenous lipid, quantity and, duration of aspiration and host lung conditions [9]. CT imaging is the clue for diagnosis. Radiological features include air-space consolidation, interstitial infiltrates, ground-glass attenuation with or without superimposed sepal thickening and air-space nodules [10]. The best treatment is removal of the offending agent. Aggressive therapies are recommended in cases with severe pulmonary damage, including systemic steroids and BAL in neglected cases [8]. We reported three cases of acute ELP due to aspiration of oil components released from Okra pods. It is a serious condition that might be fatal if not managed promptly due to respiratory failure which was the scenario in the first case.