Mehdi Rajabi and Shaker A Mousa*

Inhibition of angiogenesis, which refers to blocking the vessel formation from pre-existing blood vessels, has become an attractive target for cancer therapy. Tumors beyond 2-3 mm in size induce the sprouting of new blood vessels from the surrounding vasculature (sprouting angiogenesis). Design and development of new angiogenesis inhibitors has been validated as a target in several tumor types. In this min-review, we will focus on the role of different anti-angiogenesis strategies and inhibitors in treatment of cancer. 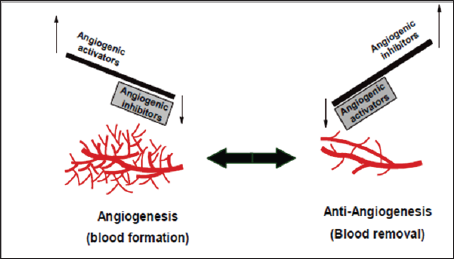 Examples of Some Angiogenesis Inhibitors for Cancer Therapy

Table 1:Examples of Some FDA-Approved Inhibitors.

Tetrac also has high affinity for the integrin -av^3 receptor, which is important for its interactions with extracellular matrix proteins and other growth factors. Due to huge application of nanotechnology in different biomedicine fields [6-9], and in order to limit the action of tetrac to the integrin -av^3 receptor, we conjugated it to poly(lactic-co-glycolic acid) (PLGA) from its outer ring hydroxyl without any change on the carboxylic acid group in the inner ring [10-12]. We also presented a new pro-angiogenesis modulator called MR-49 by deiodination of tetrac, which showed significant pro-angiogenic rather than anti-angiogenic activity of tetrac (Figure 2) [13].

Angiogenesis, the formation of new blood vessels, plays a significant role in tumor development and might be arrested by effective inhibition of tumor angiogenesis and thereby the growth of tumors may be decreased or stopped. There are two main way including direct or indirect method for designing new angiogenesis inhibitors and sometimes the combination of this anti-angiogenesis agent with some chemotherapy agents, might be essential for effective management of tumor.