Background and Aims: Inadequate sleep can lead to serious problems within physical and mental. The main purpose of this study is to investigate the correlation of sleep quality with Body mass index (BMI) and blood lipids level in adolescents.

Methods: The main purpose of this study is to investigate the correlation of sleep quality with Body mass index (BMI) and blood lipids level in adolescents. In this descriptive cross-sectional study, 310 adolescents in age range of 15-20 years old were selected randomly. Data collection instruments include two questionnaires. For purpose of data analysis, SPSS21 and descriptive and inferential statistical methods have been applied.

Sleep is one of the fundamental needs of human and one of the most important circadian cycles [1]. Any kind of disorder in its natural process can reduce efficiency of individuals in addition to create mental problems [2]. In adolescents, changes in social environments can make some changes in their sleep pattern when their growth and evolution is depended on enough sleep for health [3]. Sleeping, along with food habits, physical activity and smoking have been considered as risk factors of cardiovascular diseases [4]. Futuristic and retrospective studies have shown that root of risk factors is in cardiovascular diseases, diabetes, hypertension, Dyslipidemia and overweight, which can be affected by factors in relation with lifestyle in childhood and adolescence [5,6]. Dyslipidemia is the first step of beginning of Atherosclerosis in cardiovascular diseases [7]. In a study on heart, Bogalusa has demonstrated that increase in blood lipids in childhood and adolescence is correlated to increased risk of atherosclerosis and cardiovascular diseases in adulthood [7]. In the study of Latifi in Ahvaz City, prevalence of hyperlipidemia has been equal to 29.9% in 10-19 years old adolescents based on suggestion of US Academy for Children [8].

The statistics have been higher than American 12-19 years old adolescents (20.3%) [9]. In addition to blood lipid disorders, obesity is also one of the most important risk factors of coronary arteries [3]. Adolescence is an important age for development of obesity [10]. During 2 past weeks, prevalence of obesity in children and adolescents has been significantly increased across the world [11], so that the value has reached to 31.8% by 2010 [12] and the value is about 30% in Asian countries [13]. As adolescents of the current world form adult population of future, future adults would be more successful [14]. Two important health problems of adolescents presented by American Medical Association for Children leading to diseases in adulthood include obesity and hyperlipidemia that can enhance risk of cardiovascular diseases in adulthood [3]. Similar studies in field of investigating the relationship between sleep quality and blood lipid with BMI have been conducted in countries such as America [15], Brazil [16], Switzerland [17], New Zealand [18], China [19] and Norway [20] with different results. In some studies, sleep has been in significant correlation with MBI and blood lipid [11,15,19,20]. In other studies, no correlation was observed [16,21-23]. In this regard, study of Azadbakht et al. showed that there is significant correlation between reduction of sleep time and increase in LDL and triglyceride; although there was no correlation between short time of sleep and increased BMI [24]. According to different results in different studies, scholars have decided to investigate the relationship between sleep quality with BMI and blood lipid in Ahvaz. Through reflecting the results of these studies to relevant authorities to use required strategies to meet relevant problems of wrong lifestyles of today’s adolescents, implementation of such models can optimize effective costs for medical systems and institutes.

In this descriptive-analytical study, statistical population consists of all adolescents of 15-20 years old in Ahvaz City. 310 adolescents were selected using cluster sampling. From 25 health centers, 6 centers (2 centers in west and 4 in east) were selected randomly. After getting permission of Research Deputy of Medical University of Jundishapur of Ahvaz/Iran, the author entered to determined health centers and through investigating records of families with adolescents in 15-20 years old, several records were selected randomly. They were referred as cluster head and then, the families to level of 40 families were invited to participate in this study in case of having adolescents and agreed to be present in this project. In regard with details and goals of the study and data collection, data and written consent was received from the parents or adolescents based on volunteer participation in this study. Also, the participants were asked to be in fast 1 night before presence in health centers (12hrs before). After presence of adolescents in determined health centers, two questionnaires were fulfilled using interview by the author.

The first questionnaire was related to demographic and family information of adolescents to investigate age, gender and other personal factors. The second questionnaire has been Pittsburg Sleep Quality Inventory (PSQI). The inventory has measured sleep quality during 4 last weeks. Then, BMI indices like height and weight were measured. Weighting was done using Sika scale (made in Germany) with least clothes and without shoes with accuracy of 100. Height was measured in stood mode and without shoes with paired feet and back and shoulders in line of a straight line against meter connected to wall after connecting the bevel with head center with accuracy of 0.5cm. Weight was measured based on kg and height was measured per cm. For purpose of sampling, 5cc blood was extracted from their cubital artery. For purpose of coagulation, samples were remained in ambient temperature for 20min and then, tubes containing samples were centrifuged for 10min with 3000rpm and the isolated serum was placed in a separated micro tube and amount of triglyceride, HDL, LDL and blood cholesterol was measured. The data processing was done using SPSS21 and using descriptive and inferential statistics. Using descriptive statistics, frequency percent, standard deviation and mean values were obtained. Inferential statistics (chi square, Fischer, Mann Whitney, Kruskal-Wallis) have been also used to investigate and compare status of obtained mean values of lipid profile and BMI based on sleep quality. Significance level of tests (P<0.05) is specified with probability level of 95%. 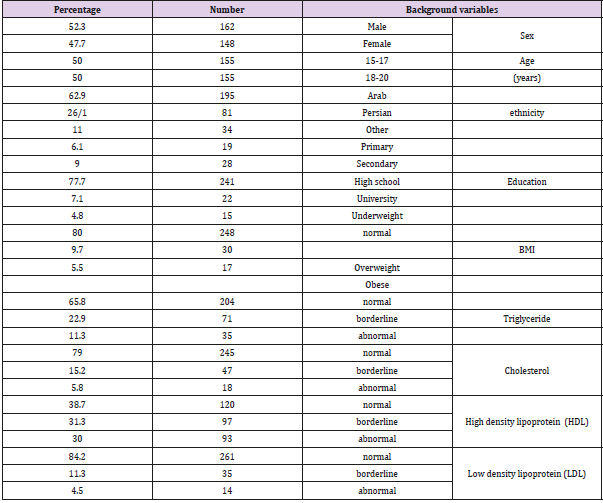 Table 1: Frequency of demographic variables of the studied samples. 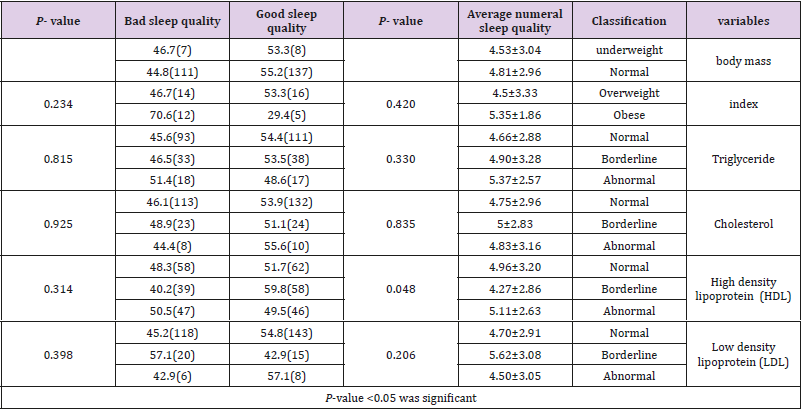 Table 2: The mean score of sleep quality in different groups of BMI and lipid profiles and the relationship between sleep quality and these variables. 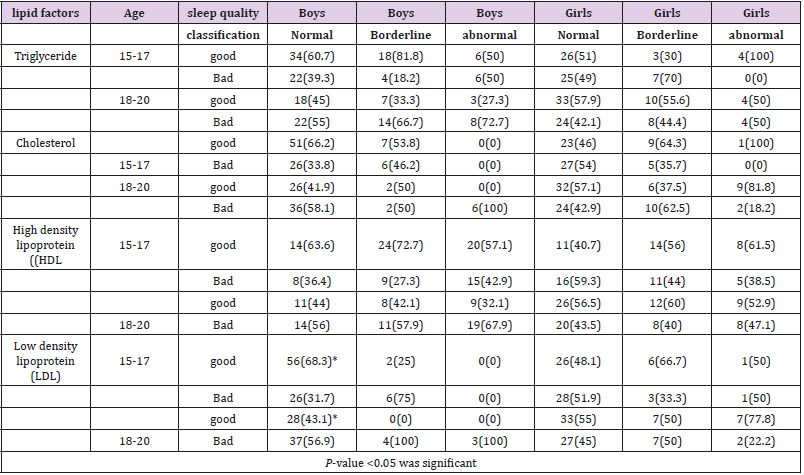 Table 3: Distribution of sleep quality in studied samples with different lipid profiles based on age and gender *.

Table 4: Distribution of sleep quality in studied samples with different BMI based on age and gender*.

In this study, according to Academic American Pediatrics (AAP), triglyceride, cholesterol, increased LDL and decreased HDL have been respectively to 11.3%, 5.8%, 4.5% and 30% in adolescents of Ahwaz. In study of Latifi, the values are obtained to 9.5%, 24.8%, 3.1% and 2.6% [8]. Prevalence of triglyceride, abnormal LDL and decreased HDL is increased compared to 5 years ago, especially abnormal HDL and LDL has had high prevalence; although high cholesterol level has had downward process to 19%. Prevalence in study of Hosseini Isfahani (glucose and lipid of Tehran Phase 3) has been respectively obtained to 6.5, 6.2, 5.65 and 45 [29]. Prevalence of triglyceride and increased LDL is more than Tehran’s adolescents and the differences can indicate racial and ethnical differences and lifestyles in these two cities. Moreover, time interval between the two variables can be reason for these differences. In this study, there was no significant correlation between sleep quality and BMI; although it was observed that in girls in end of adolescence, more numbers of obese or overweighed individuals had experienced inadequate sleep.

Obtained results from different studies in this filed are different from each other. In study of Yeelmaz in Turkey showed negative correlation between sleep and BMI [30]. In some similar studies like study of Mota, no significant correlation was observed between sleep quality and BMI [21,22], which is in consistence with results of the present study. In studies such as studies of Mushkovich, Los Lee, Kalamero, Sung and Cohort Robert on investigating sleep time [23,31-34], no significant correlation was observed. In study of Azadbakht in iran and study of Lee in Korea, reduction of sleep time is correlated to increase in BMI and obesity [24,35]. The differences may be resulted from difference among cultures and lack of significant correlation can be interpreted in this manner that BMI should be under effect of other environmental factors such as nutrition, physical activity level and stress and other factors. To interpret the result that obese girls in age range of 18-20 years old have inadequate sleep, it could be mentioned that girls in these ages have entered to the society and university. Girls are more concerned than boys about their physic and body. Dominant culture of the society can help increase of the concern. On the other hand, obesity and overweight can result in depression and decrease in self-esteem [36] and all of the mentioned factors can reduce sleep quality.

In China, among adolescents of Secondary School, those with long sleep duration had lower LDL and significant correlation was observed between LDL and sleeping duration; although no significant correlation was observed between other profiles of lipid and sleep duration [19]. Study of Azadbakht in Iran showed that cholesterol level is in positive correlation with sleep duration among boys and long sleeping time can increase cholesterol level. Moreover, boys with sleep time more than 8hrs showed higher level of HDL [24]. In Korea, people with sleeping hours more than 10hrs had higher level of triglyceride and the correlations in boys were clearer than girls [35]. In study of Sung on obese adolescents, it was found that increase in sleep duration is in significant correlation with reduction of HDL and increase in triglyceride [23], which is not in consistence with results of this study. It seems that other factors such as environmental factors play more effective role in regard with determining blood lipid level, BMI and sleep quality. It is suggested to measure effect of environmental factors on these variables in further studies. One limitation of this study is crosssectional nature of the study that lack of causal relationship can be derived from it. Hence, it is suggested to measure the correlation between sleep quality with blood lipid and BMI in long-term form (Cohort).

The present study is based on the master’s thesis of Nursing and Midwifery Faculty / Ahvaz Jundishapur University of Medical Sciences in Iran, that with financial support the University has been implemented (CDCRC -9405). Meanwhile, thanks all the participants. That without their collaboration the continuation of the study was not possible.

Background and Aims: Inadequate sleep can lead to serious problems within physical and mental. The main purpose of this study is to investigate the correlation of sleep quality with Body mass index (BMI) and blood lipids level in adolescents.

Methods: The main purpose of this study is to investigate the correlation of sleep quality with Body mass index (BMI) and blood lipids level in adolescents. In this descriptive cross-sectional study, 310 adolescents in age range of 15-20 years old were selected randomly. Data collection instruments include two questionnaires. For purpose of data analysis, SPSS21 and descriptive and inferential statistical methods have been applied.