Venous thromboembolism is a common cause of hospitalization with a high mortality rate [1,2]. Current guidelines recommend anticoagulation alone for patients that are hemodynamically stable and considered to have a low-risk Pulmonary Embolism (PE) [3,4]. Thrombolytic therapy is recommended for patients with hypotension, considered a high-risk PE, in the absence of contraindications [3-5]. The optimal management of intermediaterisk PE is less clear. Some have proposed treating intermediaterisk PE with intravenous thrombolytics; however, trials have demonstrated increased rates of bleeding without mortality benefits [6-9]. Other advanced therapies have been developed to treat life-threatening PE, including Catheter-Directed Thrombolysis (CDT), suction thromboembolectomy, surgical embolectomy and Extracorporeal Membrane Oxygenation (ECMO), [10-13] but robust evidence supporting their use is lacking.

Because the optimal management of intermediate- and high-risk PE with advanced therapies remains uncertain, some institutions have developed a multidisciplinary team of specialists to determine the best therapeutic approach for patients presenting with an acute PE called a PE response team (PERT) [14]. In spite of multiple institutions deploying PERTs, evidence on the effectiveness of a PERT is limited. In some reports, PERTs have led to increased utilization of advanced therapies, particularly catheter-directed therapy, without clearly demonstrating improvement in outcomes such as mortality, bleeding rates or length of stay [15,16]. Our institution is an academic medical center with ready access to advanced therapies for PE that does not rely on a PERT to guide treatment decisions. We believe our center is well-positioned to evaluate whether advanced therapies are associated with improved outcomes compared to anticoagulation alone in absence of a PERT. We hypothesized that patients who received advanced therapies compared to anticoagulation alone would have increased rates of bleeding, higher total direct costs and longer length of stay, without a difference in short-term mortality.

We conducted a retrospective observational cohort study at the University of Utah Medical Center, a 528-bed academic medical center with one of the largest geographic referral areas in the United States. An electronic database query was used to identify patients who underwent chest Computed Tomography of the Pulmonary Arteries (CTPA) and/or ventilation/perfusion (V/Q) scan between April 1, 2017 and April 1, 2019. An internally validated Natural Language Processing (NLP) tool designed to scan and interpret the CTPA, or V/Q radiology report was used to identify PE events. This NLP tool has a sensitivity of 96.0% and a specificity of 97.7% for identification of acute PE. We used the NLP tool to identify eligible patients based on previous reports suggesting International Classification of Diseases (ICD) discharge codes cannot reliably identify acute thromboembolic events [17,18]. Baseline patient demographics, vital signs, medical comorbidities, lab results, medications, interventions, admission date, discharge date, and bleeding events with dates were extracted from the electronic health record. Four study investigators performed manual chart reviews to validate study data regarding presence of acute PE, echocardiography, thrombolytic eligibility, advanced therapy for PE, and bleeding events. Each chart was independently reviewed by two study investigators, with any discrepancies adjudicated by a third investigator (SAJ) blinded to the identity of the initial reviewers.

Inclusion criteria were age greater than 18 years and the presence of a PE identified by the NLP tool during the study period. Exclusion criteria included chronic PE or absence of PE identified through manual chart review. Study subjects were assigned to one of two cohorts based on the treatment they received for their acute PE:

The primary efficacy outcome was 30-day mortality after acute PE identification. Secondary efficacy outcomes included 7-day mortality, hospital length of stay (LOS), and normalized mean of the total direct cost. The primary safety outcome was major bleeding within 90 days of PE diagnosis. Major bleeding was defined as fatal bleeding or bleeding into a critical site according to the International Society on Thrombosis and Haemostasis (ISTH) [20]. ICD codes were used to identify patients with bleeding into a critical location. We did not apply the 2gm/dL decrease in hemoglobin criteria proposed in the ISTH definition as we believed this criterion was subject to false positive results from reasons other than bleeding (eg. haemolysis, haemodilution, phlebotomy, anaemia of acute illness). Secondary safety outcomes included any bleeding, non-critical bleeding, and procedure-related bleeding events. Non-critical bleeding was defined as non-fatal bleeding into non-critical locations. Procedure-related bleeding was defined as bleeding associated with a recent surgical or interventional procedure. ICD codes use to identify bleeding events are listed in Appendix Table 1. All bleeding events and dates identified by ICD codes were confirmed on manual chart review. Total direct costs were determined by our institutionally derived Value Driven Outcomes tool [21]. 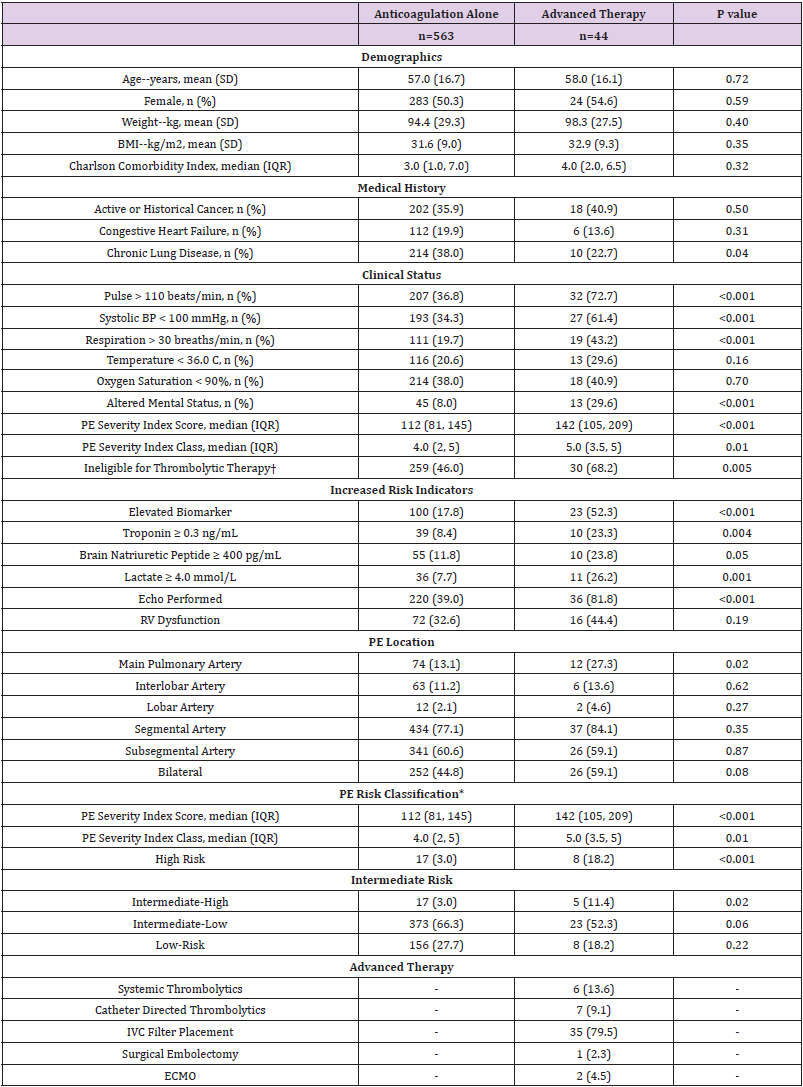 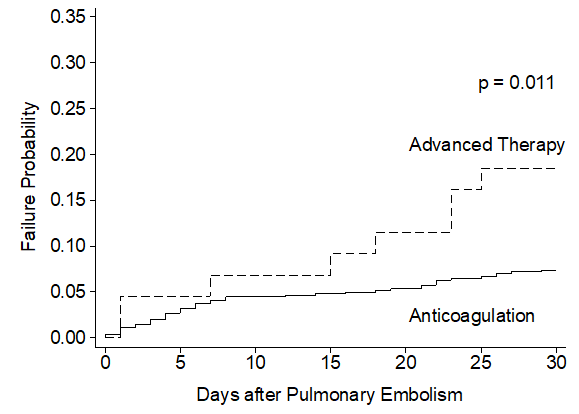 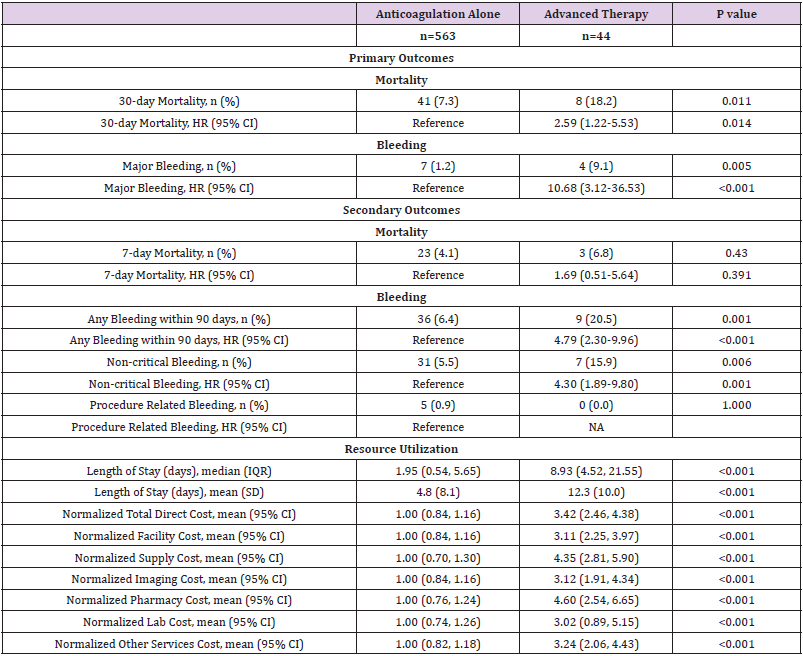 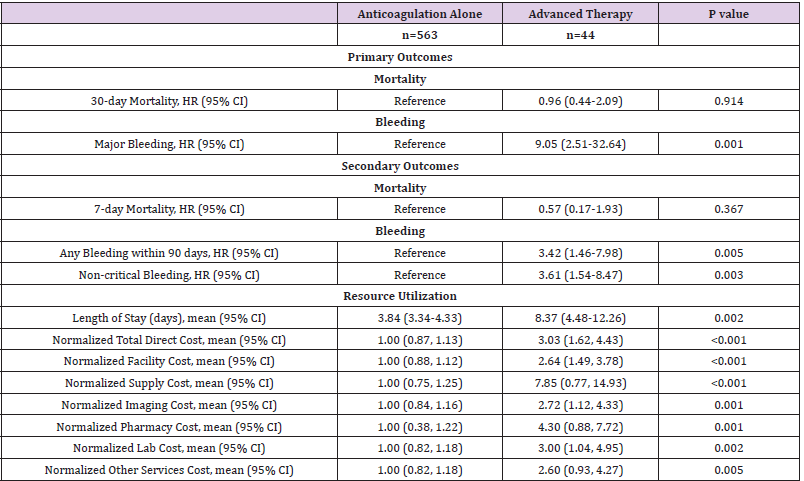 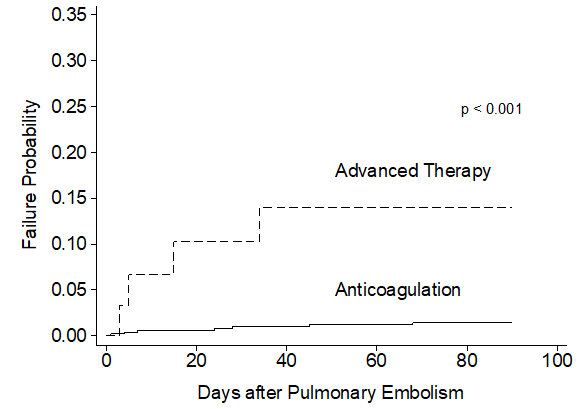 We observed the 30-day mortality was significantly higher in the patients who received advanced therapy (18.2% vs 7.3%), however, after adjusting for differences in PE severity and patient characteristics, no mortality difference was observed (HR=0.96 [0.44-2.09], p =0.914). This may be due to a lack of mortality benefit attributable to advanced therapies in these patients or limited power to detect a relatively uncommon outcome. We did identify a significantly increased risk of major bleeding within 90 days (HR=9.05 [2.21-9.98], p <0.001) in patients treated with advanced therapies. Because the overwhelming majority of advanced therapies utilized in our center were IVC filters, which are often placed due to elevated bleeding risk, this observation may be due to residual confounding by indication. We also compared LOS and total costs of care, which we found to be significantly higher in the advanced therapy group. This may be partially explained by the cost of the advanced therapy itself, however, increased costs in all categories (facilities, supply, imaging, pharmacy, lab) suggest total cost differences are not entirely explained by treatment modality for pulmonary embolism. It is conceivable that patients identified with a high- or intermediate-risk PE necessitating advanced therapy may have underlying comorbidities (eg. cancer) or acute illness that requires more resources than patients who are well enough to receive anticoagulation therapy alone.

Strengths of this study include thorough review of each clinical chart by multiple study investigators (who are all practicing hospitalists) to manually validate the diagnosis of acute pulmonary embolism, echocardiographic findings, and any clinical contraindications to thrombolytic therapy. Our normalized cost analysis and evaluation of categorized cost is novel in this field and of importance due to increasing consideration of high value care in health systems. Our study is not without limitations. We cannot exclude the possibility of unmeasured or residual confounding, though we did control for well-established prediction scores for pulmonary embolism severity, comorbidities, and bleeding risk in our multivariable model. Our analysis was conducted within a single academic medical canter, and our findings may not be generalizable to other populations. Lastly, utilization of advanced therapies was relatively low across our study population, and we lacked sufficient power for further subgroup analysis dependent on type of advanced therapy used.