Gynecological Hemoperitoneum Secondary to Sub Cutaneous Methotrexate Use in a Metastatic Melanoma Patient: A Case Report

Corticosteroids are the most used treatment for controlling immune-related toxicities derived from anti-PD-1 antibodies reactions. When there is a lack of response, other immunosuppressors such as methotrexate may be also used. Here we report a unique case of a gynecological hemoperitoneum of a patient that started subcutaneous methotrexate after previous use of oral methotrexate. To the best of our knowledge, this is the only one case reported of hemoperitoneum secondary to methotrexate use.

Melanoma is a very frequent malignancy among solid tumors. Surgery is considered to be the best option for curing patients who address respectable stages. Unresectable and metastatic disease is commonly considered incurable. Immunotherapy treatment, mainly PD-1 inhibitors such as Pembrolizumab and Nivolumab have notably increased the overall survival among patients with advanced stages that before were considered without a curative potential option. A meta-analysis showed a 60 months-overall survival rate as high as 41% for Pembrolizumab [1]. Nivolumab has also shown a 44% overall survival at 60 months but when it is combined with Ipilimumab, an anti- CTLA-4 antibody, the overall survival increases to 52% at 5 years of follow-up [2]. In general, immunotherapy is much better tolerated than cytotoxic chemotherapy. Nevertheless, immunotoxicity can be occasionally severe resulting in the necessity of aggressive management to control the immune toxicities and requiring to withdrawal these anti-cancer treatments [3,4].

Corticosteroids are the preferred and most used treatment for the management of these immune- related toxicities; however, their use can be sometimes insufficient being necessary to add other types of immunosuppressors drugs such as methotrexate. For non-infectious uveitis and other immune-related ocular toxicities, the use of methotrexate is an effective known treatment [5,6]. Methotrexate is a widely used drug in both oncological and non-oncological diseases. In non- oncological pathology, it is frequently used in rheumatological diseases such as rheumatoid arthritis, psoriatic arthritis, and juvenile idiopathic arthritis [7]. In gastroenterology, it is also used in inflammatory bowel disease, particularly in Crohn’s disease [8]. In cancer patients, it can be used in a curative setting in the MAP scheme with high doses of methotrexate in patients under 30 years of age administered pre-and post-operatively, similarly, its use in dedifferentiated chondrosarcoma can be considered [9]. In urothelial carcinoma of the bladder, it is used as neoadjuvant treatment in the DDMVAC regimen, which has been shown to improve pathological complete responses and disease-free survival compared to the gemcitabine plus cisplatin regimen [10].

Although it was widely used in the 90s as part of the adjuvant/ neoadjuvant therapy in breast cancer in the CMF scheme, it has been displaced by other schemes based on anthracyclines and taxanes, currently being an alternative in patients with contraindication to anthracyclines [11]. In gestational trophoblastic tumors, its use will depend on the risk factors, being used as monotherapy in case of low-risk disease or in combination therapy in the EMA-CO scheme in high- risk patients [12]. In the metastatic setting of the head and neck carcinomas, it is an alternative to taxanes in patients who relapse during the first 6 months after platinum-based therapy and that have been previously exposed to immunotherapy [13]. In patients with Acute Lymphoblastic Leukemia as part of CNS prophylaxis stands out, and it can be also used as high systemic doses in combination with cytarabine and or intrathecally [14]. In the case of promyelocytic leukemia, it can be used as part of maintenance treatment in high-risk patients who received induction with the AIDA scheme [15]. At lower doses, it can be used as part of the treatment of cutaneous T-cell lymphoma as well [16]. Methotrexate may cause testicular damage in rats [17] but also teratogenicity in humans [18]. The use of this antimetabolite may also result in ovarian function alterations among premenopausal women [19].

This is the report of a 26-year-old female patient that was diagnosed with stage IV melanoma. She underwent treatment with an anti-PD-L1 immunotherapy drug every 4 weeks. The patient achieved a partial response based on RECIST 1.1 criteria. Due to thrombotic events no immune- related, but probably related to her neoplastic disease, the patient was concomitantly using anticoagulant treatment. In January 2020, after 14 cycles of immunotherapy treatment, due to severe bilateral immune- related uveitis, it was mandatory to withdraw the treatment. The patient started immunosuppressive treatment with oral prednisone and ocular topical corticosteroids. Due to a non-improvement of her uveitis, in May 2020 oral methotrexate was added at doses of 17.5 mg to 20 mg per week. Later, in March 2021 due to worsening of the uveitis and under the risk of permanent blindness, intravenous infliximab was also added. After a slow improvement of her bilateral uveitis, and expecting to assure higher plasmatic levels of methotrexate, by November 2021, it was decided to change the administration route from oral to weekly subcutaneous methotrexate.

During all the time that the patient used oral methotrexate no abdominal or pelvic symptoms secondary to the antimetabolite use were reported. After the first weekly dose of subcutaneous methotrexate, the patient reported a mild abdominal pain that lasted 2 days and that stopped spontaneously. 1 week later, the patient underwent a second dose of 20 mg of subcutaneous methotrexate. Hours later, the patient started with severe abdominal pain, Blumberg (+). The patient was hospitalized. An abdominal and pelvis CT showed a left hemorrhagic ovarian cyst and a secondary hemoperitoneum. Anticoagulant treatment was then interrupted, and medical support was provided without needing surgery or transfusions for resolving this complication. 4 days later the patient was discharged from the hospital and reassumed oral methotrexate without new episodes of abdominal pain and with a progressive improvement of her uveitis. Despite the long interruption of immunotherapy, no disease progression has been evidenced until now (Figures 1-3). 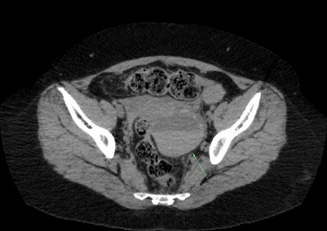 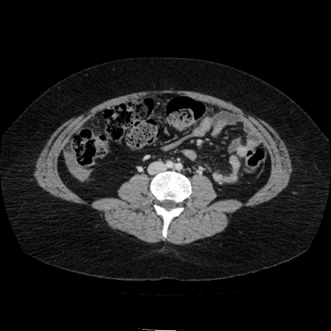 Figure 2: Shows a hemoperitoneum located at the right lower quadrant of the abdomen. 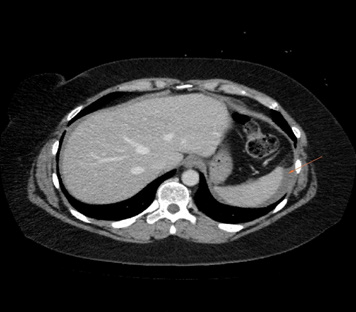 Melanoma is a frequent malignancy and immunotherapy became the gold standard treatment for advanced stages. Immunotherapy is most of the time well tolerated; nevertheless, when immune toxicities occur and must be properly treated with immunosuppressive treatments if needed. When corticosteroids are not able to control the immune-induced damage it is necessary to add some other suppressors such as methotrexate. Methotrexate may cause ovarian and embryological function alterations resulting in teratogenicity, infertility, or abortions. When it is orally given its gastrointestinal absorption is variable and saturable, showing non-linear pharmacokinetics in special with doses of 15 mg or higher reaching a plateau effect. Parenteral administration of methotrexate, such as subcutaneous or intramuscular routes shows a faster, complete, and with less variability absorption, with a dosedependent linear curve. When the same methotrexate doses are given, subcutaneous administration reaches higher plasmatic levels when it is compared with oral methotrexate [20-23].

In this case, we hypothesize that secondary to the change of the administration route of methotrexate the patient achieved higher plasmatic levels of the drug provoking a transitory ovarian dysfunction, driving to an ovarian hemorrhage that blooded to the abdominal cavity resulting in a hemoperitoneum that was fortunately easily managed with medical treatment. Concomitant use of anticoagulants favored this situation, but it was not the cause of it. Previously reported abdominal pain after the first subcutaneous methotrexate use in this patient, without any previous abdominal pain during the period that she used oral methotrexate highlights the chance that subcutaneous methotrexate use was linked with this event being more than a casualty. To the best of our knowledge, this is the first case of a hemoperitoneum associated with methotrexate use becoming a very rare complication. Different routes of drugs administration result in different pharmacokinetic and pharmacodynamics scenarios that may lead to unexpected medical complications that must be considered before the prescription.

• Dr Caglevic had a speaker role for MSD and ROCHE during the 2020.

Gynecological Hemoperitoneum Secondary to Sub Cutaneous Methotrexate Use in a Metastatic Melanoma Patient: A Case Report

Corticosteroids are the most used treatment for controlling immune-related toxicities derived from anti-PD-1 antibodies reactions. When there is a lack of response, other immunosuppressors such as methotrexate may be also used. Here we report a unique case of a gynecological hemoperitoneum of a patient that started subcutaneous methotrexate after previous use of oral methotrexate. To the best of our knowledge, this is the only one case reported of hemoperitoneum secondary to methotrexate use.