Colistin is recognized as one of the few remaining available antibiotics for the treatment of intractable infections caused by multidrug-resistant Gram-negative bacteria [1]. Recent studies have shown that bacteria carrying the mcr gene, which confers colistin resistance to most members of the Enterobacteriaceae, are widely disseminated, particularly in Asia [2,3]. Since colistin is widely used in animal husbandry [4], the spread of colistin-resistant (CR) bacteria in communities via livestock food is a potential risk factor. Moreover, CR bacteria are often found in animals and animalfood [5-7]; thus, monitoring CR bacteria in animal-food is essential. However, the conventional culture method [8] for detecting CR bacteria in food is laborious and time-consuming. Rapid detection of colistin resistance genes at the research level is now possible using the SYBR green method [9], but its widespread practicality is limited due to the need for complex steps and equipment involved in DNA extraction from samples and determination of result specificity. To overcome this limitation, we here report a simple, rapid, and practical detection method of Escherichia coli harboring mcr-1, as a representative CR bacterium, using a highspeed real-time polymerase chain reaction (PCR) kit. We further verified the utility of this method for detecting CR bacteria in retail meat samples. Although a real-time PCR assay for the detection of mcr genes from bacterial isolates has already been established, this newly proposed detection method holds practical relevance for widespread use, as the entire procedure, from food sample processing to the final result, can be completed within only 1 h.

A total of 27 retail meat samples, including pork and chicken, were collected from 10 markets (two supermarkets and eight local traditional markets) in Vietnam and five supermarkets in Japan during November and December 2019. None of the eight traditional markets in Vietnam maintained a refrigerator for meat preservation. In contrast, the two supermarkets in Vietnam and all five supermarkets in Japan had refrigerators for food storage. Each sample was collected from one meat type per market. Bacterial cultures and DNA extraction were performed on the collection day. Ten grams of each meat sample were placed in a stomacher bag (AS ONE, Osaka, Japan) containing 90 mL buffered peptone water. The samples were hand-homogenized for 2 min. The resulting homogenate was inoculated on CHROMagar COL-APSE (CHROMagar, Paris, France), a selective medium for CR Gram-negative bacteria, and cultured at 37 °C for 24 h. CR E. coli-like colonies were distinguished based on colony color (dark pink to reddish) after cultivation [8,10]. A representative colony was isolated by sub-culturing on MacConkey agar, and bacterial identification was performed. The colistin minimum inhibitory concentration (MIC) was estimated, and colistin resistance genes (mcr-1 to -5) were detected by multiplex PCR as described previously [6,11].
In parallel, DNA was extracted from 1 mL of the homogenate using the Kaneka Easy DNA Extraction Kit version 2 (Kaneka, Tokyo, Japan). The presence of E. coli and the colistin resistance gene mcr-1 in the DNA extracts was determined by real-time PCR using a mobile PCR device, PicoGene PCR1100 (Nippon Sheet Glass, Tokyo, Japan). PCR primers and TaqMan probes for realtime PCR detection of E. coli 16S rRNA and mcr-1 were prepared as described previously (Table 1) [12]. Details regarding the realtime PCR, including PCR mixtures and thermal cycling conditions, are provided in Tables 2 & 3, respectively. The DNA extract of the CR E. coli strain (E362) [6] carrying mcr-1 was utilized as a positive control in PCR. The entire 50 PCR cycles were completed within only 21 min. Moreover, the real-time PCR device could simultaneously measure fluorescence at three different wavelengths for the same sample. Two fluorescent dye-labeled TaqMan probes (Integrated DNA Technologies, Singapore), Cy5 for E. coli 16S rRNA and FAM for mcr-1, were used for each sample. The entire protocol is outlined in Figure 1. Figure 2 shows representative real-time PCR profiles of the samples. 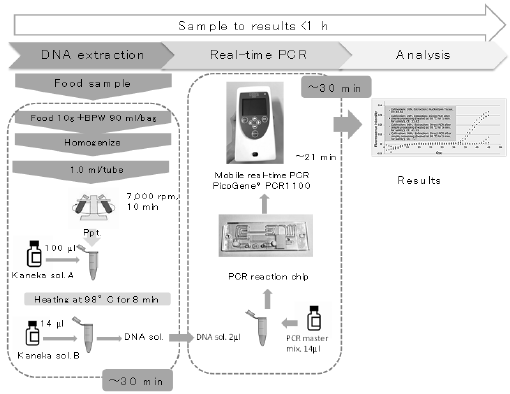 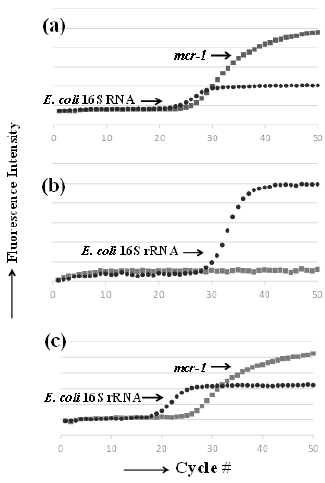 The detection sensitivity of the method was assessed using pork meat samples spiked with an mcr-1-positive E. coli strain culture. The lower limit of mcr-1-E. coli detection for the entire method, from DNA extraction to detection by real-time PCR, was 7 × 102 CFU/g; however, a minimum of 7 × 103 CFU/g was required for quantification using a linear correlation. In the validation study using retail meat samples, CR E. coli-like bacteria were detected using the culture-based method in eight out of ten chicken and in three out of seven pork samples purchased in Vietnam (Table 4). The semi-quantitative levels of CR bacteria in these samples were in the range 103‒108 CFU/g (Table 4). All representative CR E. coli isolates from each sample were confirmed to be resistant to colistin (MIC ≥ 4 μg/mL) and possessed mcr-1 but not mcr-2 to -5, except for the H-E market pork sample, which harbored mcr-3 in addition to mcr-1, as determined by multiplex PCR. No samples from the Japanese supermarkets were contaminated with CR bacteria. All samples, except for the H-E market pork sample, that were positive via the culture-based method were also positive by real-time PCR (Table 4). Some culture-negative samples such as H-B market pork, T-B market chicken, T-B market pork, and T-E market chicken were PCR-positive. Such contradictory results may be attributed to the features of the real-time PCR method and its ability to detect mcr-1 even in dead cells and/or non-E. coli cells. In contrast, a pork sample from the H-E market showed CR E. coli colonies after culturing but tested negative for mcr-1 by real-time PCR. Such discrepant cases could be due to a low level of mcr-1–positive bacteria below the detection limit of the real-time PCR method or the presence of bacteria expressing non-mcr CR determinants [13].

The new method presented herein detects the target gene and facilitates quantitative analysis. In addition, the method using TaqMan probes has high detection specificity, and is simple because it does not require specificity verification by melting curve analysis, even for one-step extracted DNA from food. The results output the ratio of bacteria carrying mcr-1 to the total number of E. coli cells, which may be mcr-1–positive or –negative bacteria (Figure 2). The detected quantitative mcr-1 levels were higher than the CR E. coli-like bacterial levels determined via the culture-based method because the real-time PCR method detects all mcr-1 regardless of bacterial species. The quantitative linear range detected via realtime PCR was between 103 and 106 CFU/g. Although the detected signal was below the quantitative linear range limit in some samples, they were still considered to have positive results via realtime PCR. The approach described in this study provides limited information regarding the degree of contamination; nevertheless, the developed method is reliable and practical owing to a short processing time, enabling the rapid screening of contaminating bacteria with mcr-1 in food.

A new rapid and practical screening method was developed for detecting CR E. coli in food samples. The developed method is advantageous because it is easy to perform, has a short processing time, and provides reliable results that are consistent with those obtained by traditional methods.

This study was conducted using a mobile PCR device, PicoGene PCR1100, provided by Nippon Sheet Glass, Tokyo, Japan. There were no competing financial interests or personal relationships that could have influenced the work reported in this paper.

This work was supported by the Japan Society for the Promotion of Science KAKENHI (grant number 20H00561).

The datasets used and/or analyzed in this study are available from the corresponding author on reasonable request.