Degenerative disc disease of lumbar spine is almost universal with increasing age. Between 70-90 % of individuals will experience back pain at some point in their lives. The commonest site of pain in the spine is the intervertebral disc. Although the central part of the disc has no nerve supply, the annulus is very sensitive and is often a source of pain. Disc prolapse occurs commonly in middle age with a typical history of an episode of back pain either related to lifting and / or twisting or which occurs spontaneously. 80% of disc prolapses occur in lumbar spine, the majority at L5-S1 and at L4-L5. The back pain commonly lasts for 2-6 weeks but is followed immediately by sciatica or nerve root pain. The pain follows one or more dermatomes and is often associated with neurological symptoms, altered sensation and weakness in the muscles innervated by the compressed nerve roots. Men are more commonly affected. Multiple level disc involvement is commoner as compared to single level disc involvement. L4-L5 and L5-S1 level discs are most commonly affected due to disc degeneration changes. MRI is the standard imaging modality for detecting disc pathology due to its advantage of lack of radiation, multiplanar imaging capability and precise localisation of intervertebral disc changes.

The purpose of this study was to subject patients with persistent low backache who were unresponsive to 4 weeks of conservative management to imaging in the form of MRI Lumbo-Sacral spine and study the MRI findings and to evaluate the age and sex distribution and level and number of discs affected in degenerative lumbar disc disease by MRI.

In a peripheral hospital in Nasik, over a period of one year, a total number of 52 patients who presented with Low Backache unresponsive to conservative management for 4 weeks underwent MRI evaluation of the lumbar spine and the reports were analysed. The demographic details of the patients who reported to this hospital were extracted and the levels and number of the lumbar discs affected were classified according to their age and gender groups. 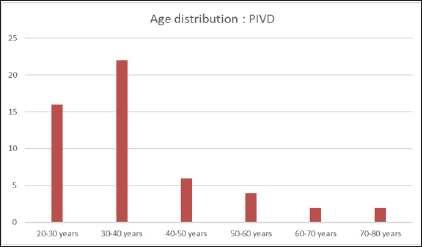 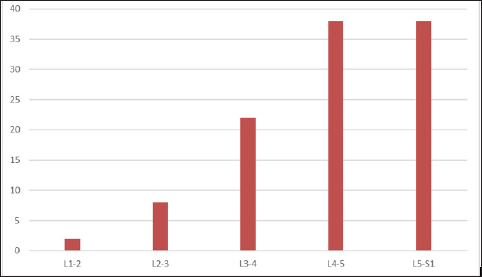 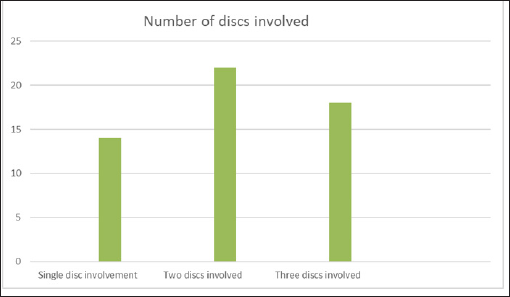 Lower back pain secondary to degenerative disc disease is a condition that affects young to middle aged persons with peak incidence at the age of 40 years. The main symptom of disc degeneration after low back pain is sciatica. Sciatica is a sharp, shooting pain radiating to calf or sole of the foot which aggravates on standing, walking, bending, straining and coughing. There are many risk factors associated with lumbar degenerative disc disease like advancing age, smoking, obesity, trauma, heavy weight lifting, height and genetic factors [1]. Certain occupations like machine drivers, carpenters and office workers are associated with it [2]. Disc desiccation is a common degenerative change of intervertebral discs. It results from replacement of the glycosaminoglycans within the nucleus pulposus volume [3]. Disc degeneration with diffuse disc changes are more commonly found at L4-5 and L5-S1 level [4]. Multiplicity in the disc level involvement is common as compared to the single disc involvement [5] (Table 1).

The lower back pain and sciatica were due to nerve root compression , which was significantly associated with disc degeneration [6].Serious neurological symptoms may be an indication for urgent surgery to decompress the nerve roots but a waiting period is the best because 90% of patients will have relief of their pain within 6 weeks [7].Minor degrees of weakness and numbness will usually improve with time and may resolve completely [8]. Motor weakness is more likely to recover than sensory change [7]. Herniated lumbar disc is one of the most commonly diagnosed abnormalities associated with low backache [9]. Disc herniation of the same size may be asymptomatic in one patient and can lead to severe nerve root compromise in another patient [10]. MRI has emerged as an investigation of choice over other investigations for a herniated disc and become a gold standard to diagnose herniated disc [11]. Despite the high sensitivity of MRI, there is still a question about whether the modality is acceptably specific or not as sometimes it reveals abnormal findings in the absence of clinical signs and symptoms [12].